While the Mid-Atlantic was getting the white stuff this past weekend, I was in snow-starved New England. Dr. Tim Leashing, a college roommate of mine, invited me up to ski with him Saturday morning at Waterville Valley ski area in New Hampshire. Skiing an old school resort with an old school mate seemed like fun.

Located just off 1-83 about two hours north of Boston, Waterville Valley is often bypassed by Bostonians heading further North to bigger, more popular resorts. Yet boasting 54 trails off 12 lifts and over 2,000 vertical feet, Waterville Valley is no small mountain. Founded in 1966 but with roots back to the 1930s, it has an old school feel. The warming hut on the mountain has photos of RFK and John Glenn skiing here in the Sixties. No condos or any developments are in sight from the lifts, just mountains and lots of trees. The base area is small: just a few buildings with lots of benches for brown baggers. Most of the lifts are high speed quads with just enough old school fixed doubles around it keep it real.

And by “real” I mean “real cold.” This is New Hampshire and the morning I skied the high was forecast to be 16 degrees, and I doubt we ever reached that balmy temperature. The skies were gray and the winds were strong. 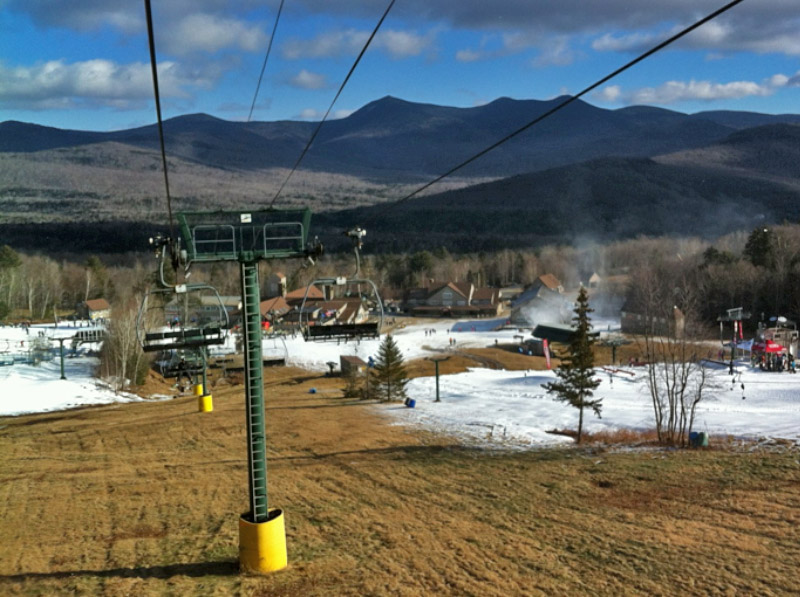 The “High Country” snow fields on top of the mountain. Photo by Robbie Allen.

This early season day the resort’s ski report boasted 9 trails off 4 lifts. In reality, there were two unique ways down with some side trails thrown in for a little variety. Waterville has a main quad that reaches up to the upper “High Country” snowfields which are served by their double chair. As is common in New England, weekend mornings are for kids race teams. This area was busy with many racers buzzing around and crashing gates. We stuck to the lower quad with most the other non-racers (read Ski Dads).

The open runs were steep and the coverage started strong. But the snowmaking had to battle with the sharp winds, thus the coverage began to wear thin quickly, revealing hard New England ice. I had not skied real East Coast conditions in awhile and had to re-learn handling the slick stuff. Luckily I only suffered one crash. Doctor Tim said I was ok. So I kept skiing and managed to get in 23 runs for 25,263 vertical feet per my AllSnow iPhone app. Not bad for first time on snow this year. 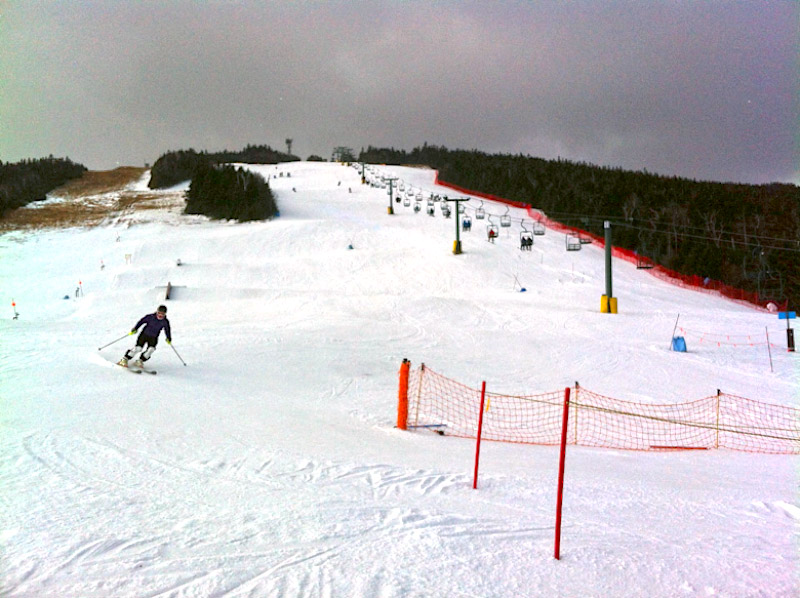 No condos here at Waterville Valley. The snowmakers working to increase coverage. Photo by Robbie Allen.

Thanks Robbie for your article.  I grew up skiing and racing at Waterville, and my dad still coaches there on weekends.  You're right about the "Hidden Gem" part- Waterville doesn't get as much notoriety as other N.E. ski areas, but it has a lot to offer: great advanced intermediate and expert terrain, terrific 360-degree White Mountain views (including of Mt. Washington on clear days), and a nice "old school" feel (limited commercial development, no highways nearby, etc.).  I would encourage other DC Ski-ers to check it out sometime (hopefully when there's more terrain open than when Robbie was there)!