We had a marvelous day skiing on Martin Luther King Day — traditionally one of the busiest ski and snowboard days of the year. But the snow was perfect, the weather was warm, and the many thousands of people, from numerous countries, skied in control and showed respect for those around them. Very few people appeared to be bombing down the mountain, endangering themselves and others. The day became more exciting than usual, as the sky darkened with a major snow storm on the way. The big dump of light, fluffy snow made all the snow areas better as the week progressed.

Once again we skied at Liberty, near Gettysburg. We go there often, because we have a lot of good friends there and it is the closest drive from Washington, D.C. But its sister area, Whitetail, is also excellent, with some longer, steeper runs. It is about a two hour drive to Mercersburg, PA; Liberty is about an hour and a half for us. 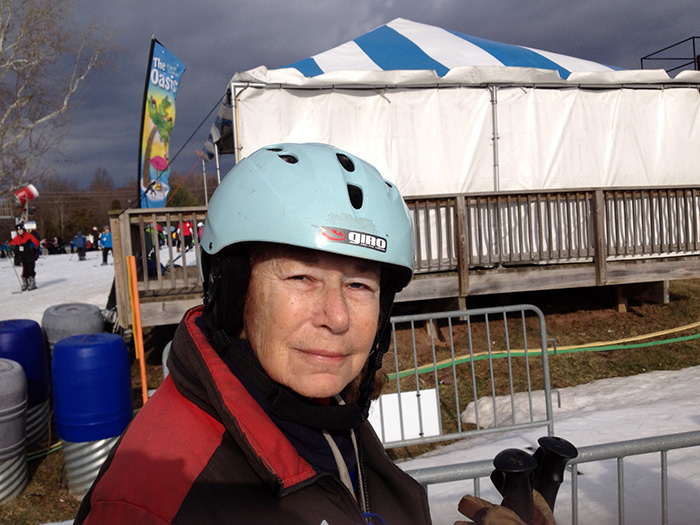 There are many programs available for those who love snow, the mountains, and nature. There are special learn to ski and snowboard programs during the week at Liberty and other areas. There are always expert instructors available. On the weekends, there are instructors and equipment available for Warfighters (Wounded Warriors), and for mentally and physically challenged children and adults.

The Whitetail program has been run for many years by Bill Dietrich. It is called the Two Top Mountain Adaptive Sports Foundation and can be reached at twotopadaptive@yahoo.com. Or, www.twotopadaptive.org.

Part of its mission is “to build confidence and self-esteem that will call over into everyday life and provide a comfortable atmosphere that creates fun experiences for all participants.” Bill tells us they have had “over 220 skier visits by warriors and their families so far this season, with over 80 during the weekend.” On Jan. 31 to Feb 2, Bill says they have Joel Berman from Adaptive Adventures, Colorado, visiting to direct a Warfighter weekend. All the programs depend on contributions to stay alive and help others.

Liberty Mountain Resort has a very energetic adaptive program run by Leslie and Dick White. Some of its top instructors are the Penland family — Trippi, husband Tom, and son David. They are dynamic and patient instructors, working with those who have many disabilities, such as blindness and paralysis. This season there are special 4-week training sessions for Warfighters. There is a program for special needs Korean athletes during Presidents Day. But anyone can make arrangements to join in during the week or on weekends. Weekdays are less crowded, if you can make it. 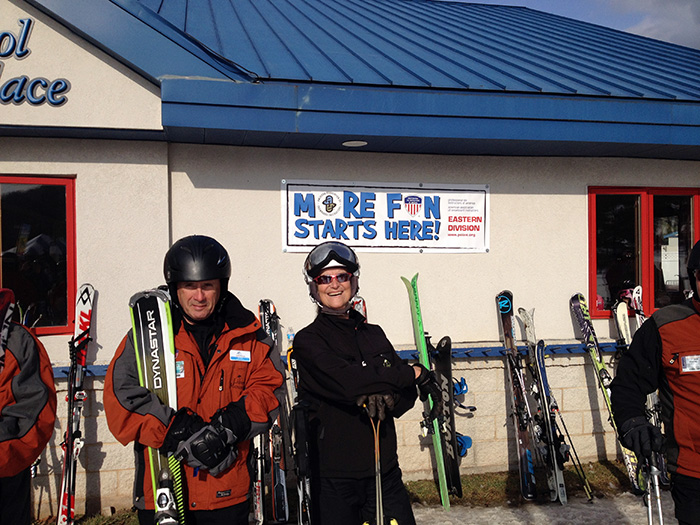 The Liberty program is called BRASS- Blue Ridge Adaptive Snow Sports. Contact is info@brasski.org and web site is www.brasski.org. If you are at Liberty, you can look for them in their room near the Instructors desk.

Liberty Mountain has some of the most fun and creative programs of any ski area. My favorite is pet day at the end of the season. You can bring your pet to the mountain, and show off their snowboarding or skiing skills. But none of them can best the snowboarding possum who, sadly, died and went to possum heaven.

On January 26 there is a special “Safe Riding for Ryan” Rail Jam. It honors the memory of Ryan Lichtenberg. He was a former employee who died while snowboarding in Colorado in 2004. Liberty encourages all athletes to wear helmets and be safe.

On a personal note, I once fell hard in Utah and hit my head. I heard a crack and saw sparkles. In the ensuing days, I became dizzy and had a splitting headache. I now believe that may have triggered my Parkinsons disease years later, but we will never know. In any case, I am still completely devoted to snow sports. But daredevils do not have to do death defying flips in the air, or ski in the backcountry where there is avalanche danger out west. Skiers and boarders do not have to speed and endanger themselves or others. You can have plenty of fun and exercise, while cooling it at the same time!