My wife, Karen, and I get to Snowshoe Mountain almost every year. And every year it has been different. We’ve skied in the rain, skied in the fog, been inundated with snow, enjoyed the warm temps and soft snow of spring skiing, been blasted with high winds and have had crisp clear sunny days with ideal temperatures in the mid-twenties. And it has always been fun.

This year we enjoyed the COLD! 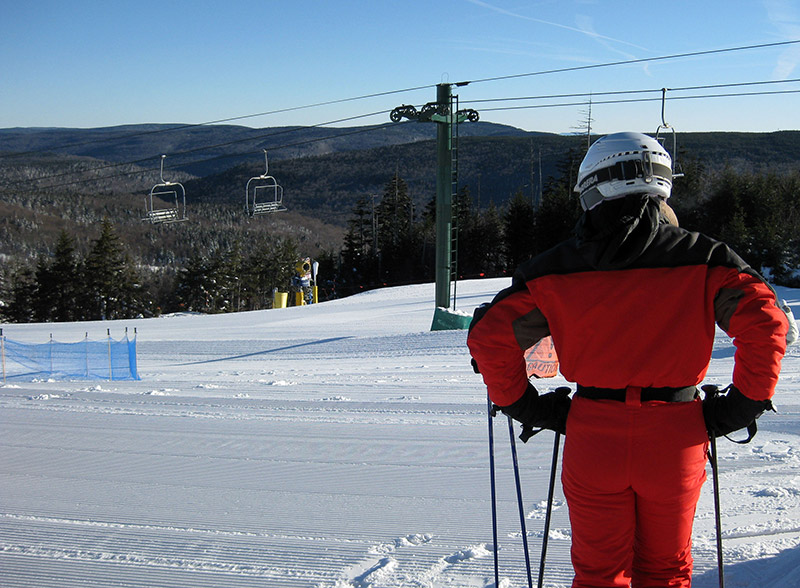 Karen waits for the ropes to drop. Photo by Matthew Graham.

As we waited for the ropes to drop on our first morning of skiing, the thermometer read negative 12 degrees Fahrenheit! I bought Karen a pair of lithium-ion, battery heated gloves for Christmas because her hands always get cold — 200 bucks on sale at Cozy Winters. We would soon find out if they were worth the money. 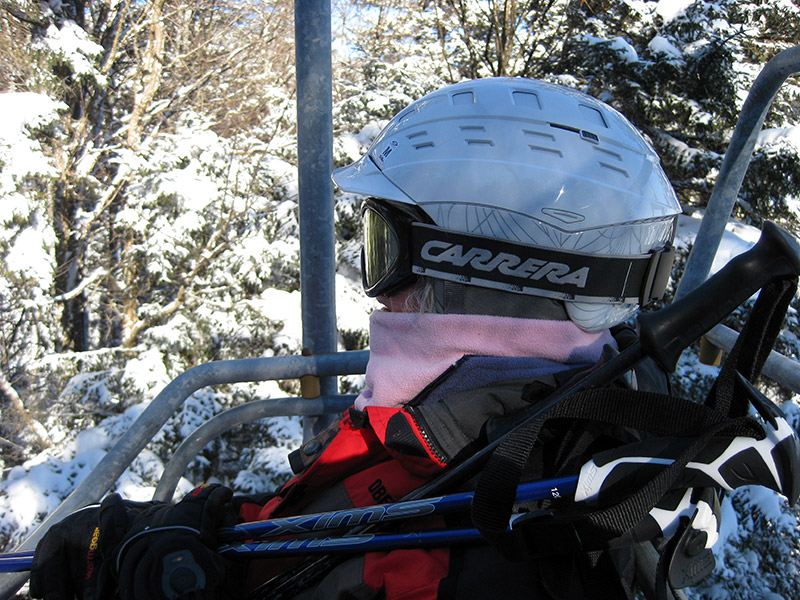 With her new heated ski gloves, Karen’s not cold, despite sub-zero temperatures. Photo by Matthew Graham.

The slopes opened and we swooshed down the corduroy of the blue run, Spruce, to the base of the Ballhooter High Speed quad lift. Luckily the winds were light and only the portion of my face between my goggles and my neck gaiter lay exposed to the elements. Karen and I were both in full metal jacket mode — expedition weight long underwear base layer, fleece on top of that, insulated ski pants and our best winter ski jackets — plus balaclavas and neck gaiters and full-bed foot warmers in our boots. I wore my warmest gloves, an old pair of Hotfingers gloves that aren’t made anymore that I have re-sewn several times over the last decade. They only cost seven dollars!

On the lift Karen reported that the gloves were working great. They have three warmth settings and she had them set on high. We tackled the black Grabhammer run next, one of my favorites! As I raced down the steep terrain the cold air began to penetrate my layers and I thought to myself — I really don’t need to go so fast. It was a Friday morning and, because of the cold, the slopes were empty. I turned off my speed mode and took my time carving easy turns in the packed powder.

Snowshoe is the mid-Atlantic’s largest resort with 57 trails. The main face has a vertical drop of eight hundred feet and the Western Territory section drops a whopping fifteen hundred feet. Karen and I squeezed in eight runs and then took a break for a late breakfast back in the mountaintop condo. She recharged her gloves as we ate and then got back out onto the mountain. It had warmed up to zero — zero degrees Fahrenheit, that is. It’s surprising how warm zero feels after skiing in minus 12! We traversed the mountain to the Widowmaker area to ski for another ninety minutes on the three black slopes, Sawmill, Camp 99 and, of course, Widowmaker. 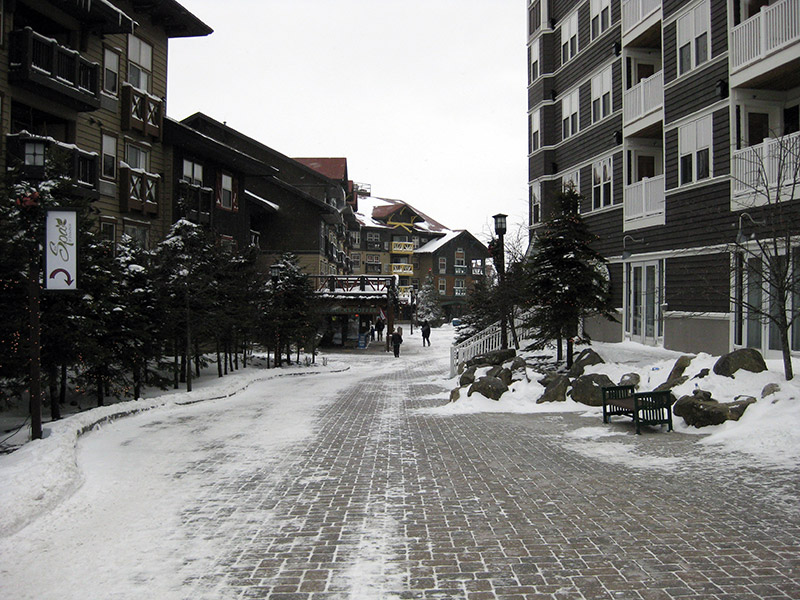 The mountaintop Village at Snowshoe. Photo by Matthew Graham.

Despite our late breakfast, we both felt hungry and I picked up a pizza and salad at Cheat Mountain Pizza while Karen returned to the condo. Snowshoe is an upside down resort with the lodge and a variety of condos, restaurants and shops at the top of the mountain in a charming village setting. Karen was on call for her job that afternoon. So after lunch I made my way over to the Western Territory to ski Cupp Run and Shay’s Revenge.

Cupp was designed by legendary Olympian Jean-Claude Killy. A favorite route, however, is to start on upper Shays and then traverse to Lower Cupp. Lower Shay’s is one of the true double-diamond expert slopes in the region. After making the Shay/Cupp run on a delicious layer of soft, flat powder, I decided to give Lower Shay’s a shot. Usually it’s Volkswagen Beetle sized moguls. Today, however, it was a sheet of ice. Despite all of the snow the resort had received the prior few days, the strong westerly winds had blown the steep slope-face bare. I came over the top edge with speed, turned, AND NOTHING HAPPENED! I side skidded a quarter way down the center of the slope aiming for any clump of snow to stop. Another skier stood along the tree line in a similar situation and I asked him if the snow was better there. “Barely,” he replied. I traversed the face to the opposite side where I found enough snow to make a few turns and survived my way to the bottom. 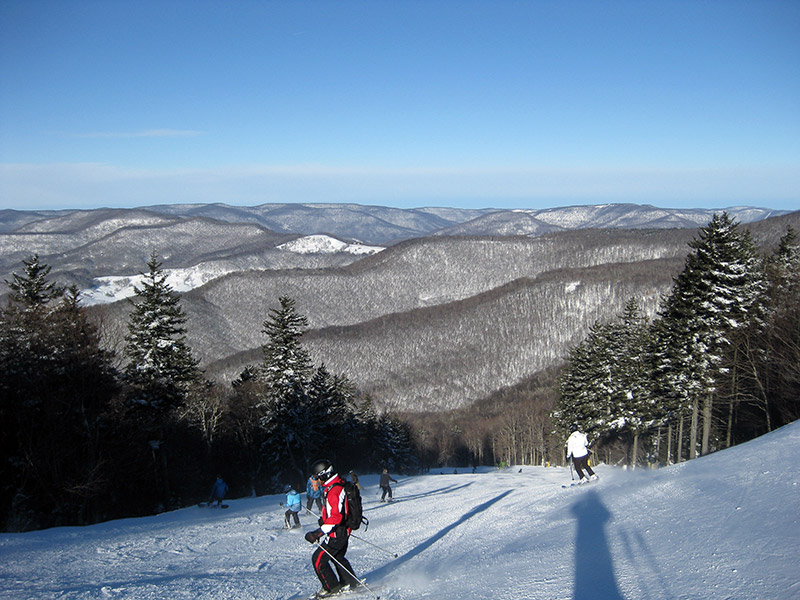 Thus, I stayed on Cupp and Upper Shay’s for the remainder of the afternoon. I met several people on the lift who had also said they went down lower Shay’s ONCE. With the sun high in the sky, the thermometer on my jacket read 8 degrees — a HEAT WAVE!

Karen and I dined at the Junction Restaurant — a nice tavern with hearty pub-grub.. We then called it an early night. Glad we did. The wind kicked up around 2 a.m. and woke us up. The entire condo building shook in gusts of over 50 mph. And it howled all night long!

The following morning we again awaited the dropping of the ropes ceremony by the ski patrol. They took their time, as usual, waiting until exactly 9 a.m. and not a second sooner. The winds still raged. However, the multi-story condos blocked the wind — the temperature had risen to a balmy 7 degrees with a predicted high in the mid-teens. Another skier remarked that “it’s just like the Bahamas today!”

Being a Saturday, we knew the crowds would pack the main face by 10:00 a.m. and create a massive waiting line at the Ballhooter lift. So we schussed down Ballhooter, Spruce, Grabhammer and Gandy Dancer a couple of times each before escaping to the Widowmaker area. Here the slopes remained crowd-free until about 11:15 a.m. Our customary busy weekend tactic is to hit the Western Territory before lunch. With the freight-trains of gusts blowing from the West, we decided instead to grab an early lunch at Cheat Mountain Pizza and then take the bus down to the Silver Creek Area. 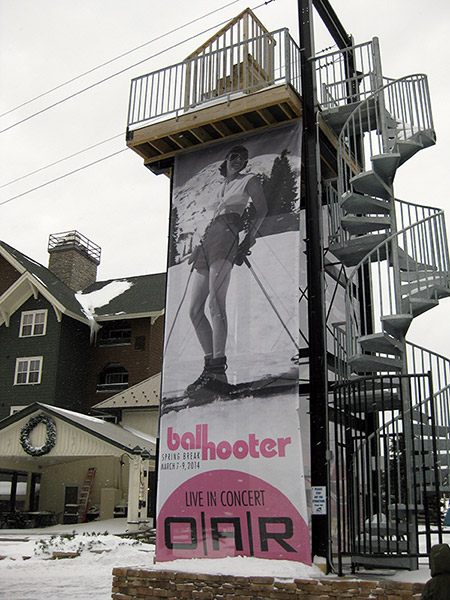 The slopes at Silver Creek were joyfully empty and, as the area is lower in elevation and east facing, the wind inconsequential. A light snow fell, creating perfect conditions — all of the trees were covered in powder and it felt like Christmas! There are also several terrain parks at Silver Creek, which remained surprisingly uninhabited. We repeatedly skied the handful of intermediate and expert runs and called it a day at 4:30 when the lights came on for night skiing. The batteries in Karen’s gloves began to give out and for the first time in two days she mentioned that her hands were cold.

On Sunday, we had scheduled massages at noon at the new Snowshoe Spa and we needed to check out of the condo. We therefore rushed to ski the Western Territory first thing in the morning. Saturday’s winds had made for several areas of hard pack. After a couple of runs, it was a retreat to the main face. 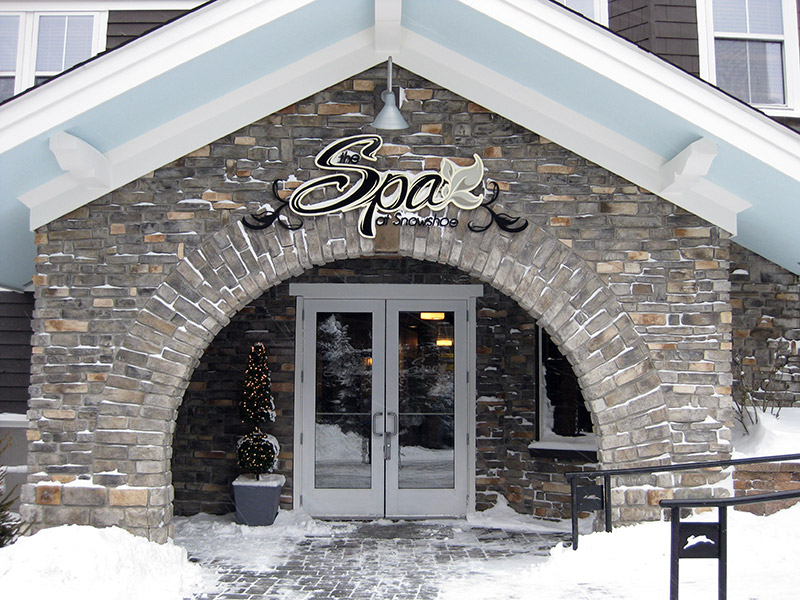 The new Spa at Snowshoe. Photo by Matthew Graham.

We avoided the masses at the Ballhooter High speed Quad lift by riding the old and slow two-person Grabhammer lift. The base station is tucked away and easily overlooked. And the lift doesn’t always run. I’ve never been able to figure out when this lift is supposed to be open. We lucked out that is was operating on Sunday morning — allowing for us to get in a few more runs before having to check out.

The sun came out, the wind died and the temperature rose to 15 degrees. We figured we were better off getting massages. It was warming up a bit too much for skiing! 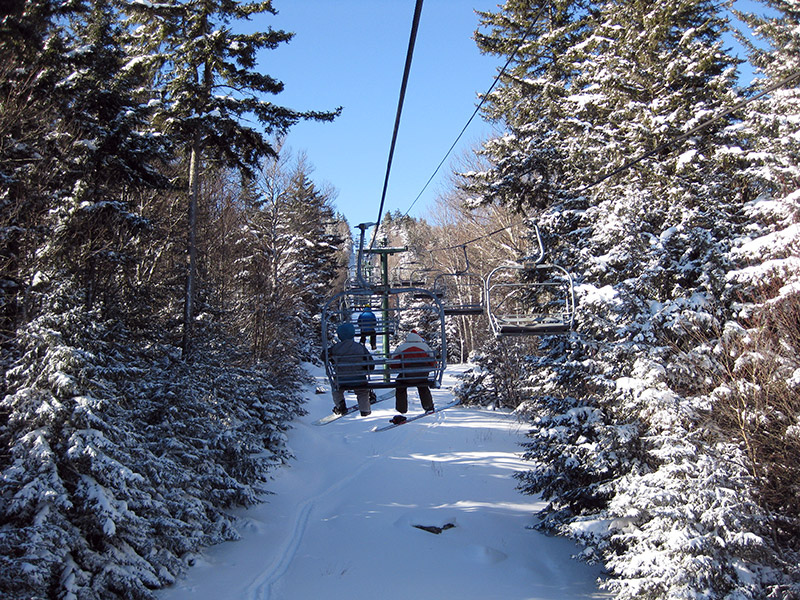 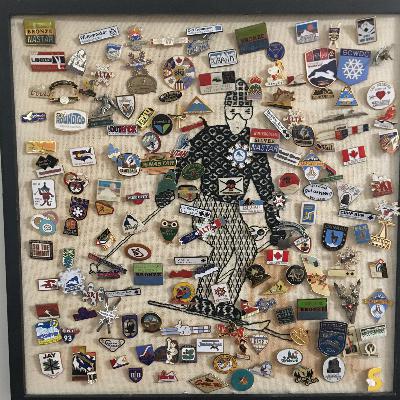 Grabhammer lift is normally open only on weekends!