While those in the Mid-Atlantic were suffering from a never-ending winter, the West Coast was experiencing a snow drought. Conditions at the Tahoe Resorts were sketchy at best for most of the season. Luckily a late season blizzard hit the area the first week of April and pushed the season until the end of April, 2014. Thanks to this storm I found myself skiing at Kirkwood on Easter Sunday enjoying some great spring corn!

Kirkwood Mountain Resort is like a grown up A-Basin. It is located a good hour south of Lake Tahoe. It is surrounded by National Forest land so there is no nearby town or development outside of the resort area. The resort is tucked away in a high valley with the steep ridges of Thimble Peak at 9,876 feet looming overhead.

As is the case at A-basin, everywhere you look from the base lodge looks like steep skiable terrain; unlike A-Basin there is some development here. Kirkwood does have a small village area, some condos and even a dated hotel tower (a la Wisp), but the development is not whelming. If you remember what West Virginia’s Snowshoe was like pre-Intrawest, that is the Kirkwood groove. The nearest town is the really just Kirkwood Inn across from the entrance, and the bar at the Inn is the only nightlife not at the resort. But this place is not about condos or night life, it is about skiing! 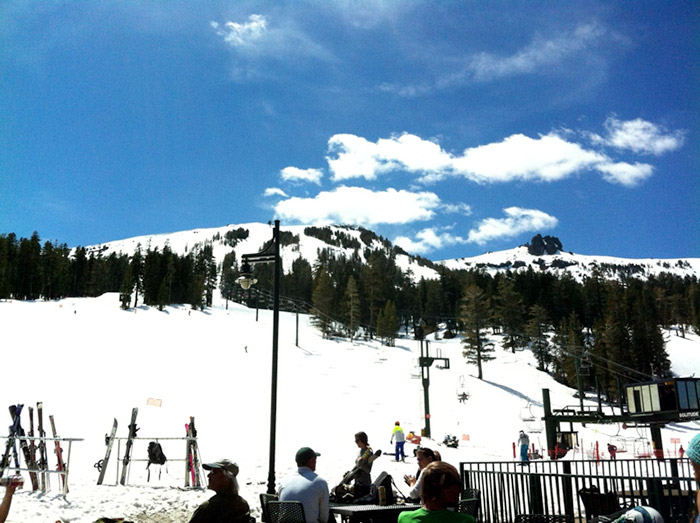 Chairs 5 and 6 on the front side at Kirkwood. Photo by Robbie Allen.

Kirkwood boasts 86 marked trails covering 2,300 skiable acres, served by 15 lifts with 2,000 feet of vertical drop. And drop it does! The front side directly outside of the lodge area is served by two high speed quads. The longer of the two, the Cornice Express, takes skiers right to the top of the ridge for some serious in-bounds back terrain. Jumping on this quad for the first run of the day was probably not the smartest move as the snow had not loosened up. Channeling my best Tommy Moe and dropping down the aptly name Olympic trail made my quads and maybe knees shake right out of the get go. But it made the clear statement that Kirkwood is not about cruisers — it is about steeps.

The signature run at Kirkwood is The Wall, a double-black diamond expert’s-only trail that looms even higher. The ride up the Wagon Wheel chair provides plenty of time to think about what looms ahead and pick your line. The chair tops out at 9,500 feet and the The Wall falls below into the Wagon Wheel Bowl.

When we arrived after a few more runs lower on the mountain, the sun had just begun to loosen the snow into a nice spring corn. Thinking we could avoid the worst of the moguls, we traversed a bit across The Wall before dropping down. That worked great until we exited the bowl and saw the sign “Warning — Cliffs Ahead.” The bowl feeds to a trail named Dick’s Drop and into the aptly named The Drain. The trail was a series of drops into tight canyons leading down to The Drain. We were clearly over our heads. So we managed to traverses back and find an easier way down. However, that is the issue at Kirkwood: there is no real easy way down. 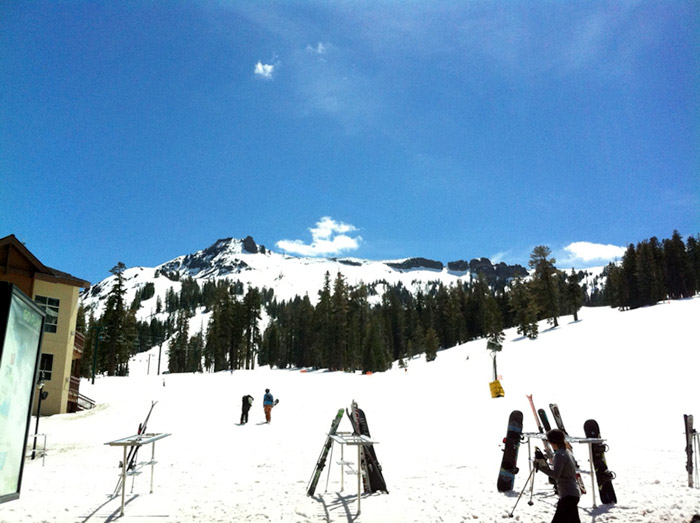 Looking up at The Wall and the crowds at Kirkwood. Photo by Robbie Allen.

If there is a downside to Kirkwood it is the lack of moderate terrain. The resort built the “newer” Timber Creek base area a bit down the valley to try to make up for this. However there is excellent, more moderate terrain on the “Backside of Kirkwood” off the Sunrise Chair. It takes two chairs and a bit of a slog to get there, but the effort is worth it. Here the terrain really resembles the moderate terrain up high at A-Basin. The day we were there the long blue cruiser Happiness Is certainly was!

Overall Kirkwood was great fun. It combines a bit of old school with a bit of new. Owned by Vail Resorts there is the potential that it could grow. However, given the remote location, steep terrain, and heavy snows that bring out California’s goofy tire chain law, it will probably not become a destination resort anytime soon. If you can get here I am sure you will be impressed. Lots of ski areas claim to be a “Skier’s Mountain” but Kirkwood really is! 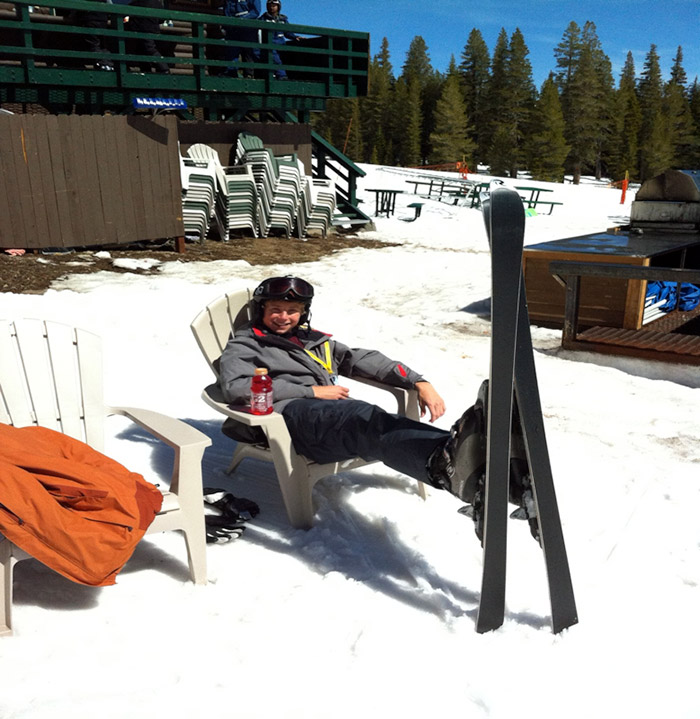 Enjoying the sun on the Kirkwood backside. Photo by Robbie Allen.

I am surprised to see Robbie, a self proclaimed small hill specialist, write on Kirkwood, but he is spot on.  I had my season pass here this year and love the place.  I got the pass here because a year ago my daughter and family moved to the east bay after 15 years in VT and 15 years of skiing Mad River.  They took to Kirkwood instantly and I did too.  IMHO it is at least the equal of any other Tahoe area for terrain and largely escapes the herds that frequent the others.  On the night of Apr. 25, a Friday, it snowed 20" of cold powder, and I was there on the 26th.  It was epic until about noon when it got baked in the hot sun.  It was indeed a drought year in the Sierra, but that meant 250" of snow instead of the usual 500.

Kirkwood is a 45 min drive from S Lake Tahoe and is on the Sierra crest at 7800 ft. Whereas most of the others have a base at 6000 or 7000 ft.  That means more, lighter, dryer snow, and lighter crowds.  All of us Kirkwood pass holders hope that Vail leaves it alone in its unique niche.  Let the masses in the center of the recreational skier market have Heavenly and Northstar and leave Kirkwood as is.

Nice way to spend Easter vacation and good comparison to A-Basin.  I think Kirkwood historically had its development throttled by a weird infrastructure situation due to its remoteness.  It uses its own diesel generators for electricity rather than a direct link to a regional electrical power grid.  Also, it has struggled with solvency a few times since it started around 1972.  Vail Resorts probably secures its future in a useful way.  While, I agree with Denis that it would be nice if it is not grossly overdeveloped, it might be nice to add a couple additional lifts on the far edges of the current trail layout to lessen current requirement for a lot of high traversing to reach some fun terrain along the perimeter of the ski area.  I'll never forget the first time I saw the Kirkwood ski trails when I flew in a jet airliner over Tahoe.  It was one of the most obvious snow pockets in the whole region due to it's high base and favorable exposure.  It was built later than many other Tahoe ski areas and I think the spot was chosen because of excellent snow preservation, not because of ease of access or some kind of pre-existing tourist draw.