The next best thing to a ski trip out west is the Western Territory of Snowshoe Mountain, West Virginia. In early March, 2015, we were guests of the owner of the new Corduroy Inn, which is across the street from the Western Territory with its black diamond Cupp Run and double black diamond Shay’s Revenge. These trails drop 1,500 vertical feet over one mile, which is the biggest drop in the Mid-Atlantic and Southeast region. 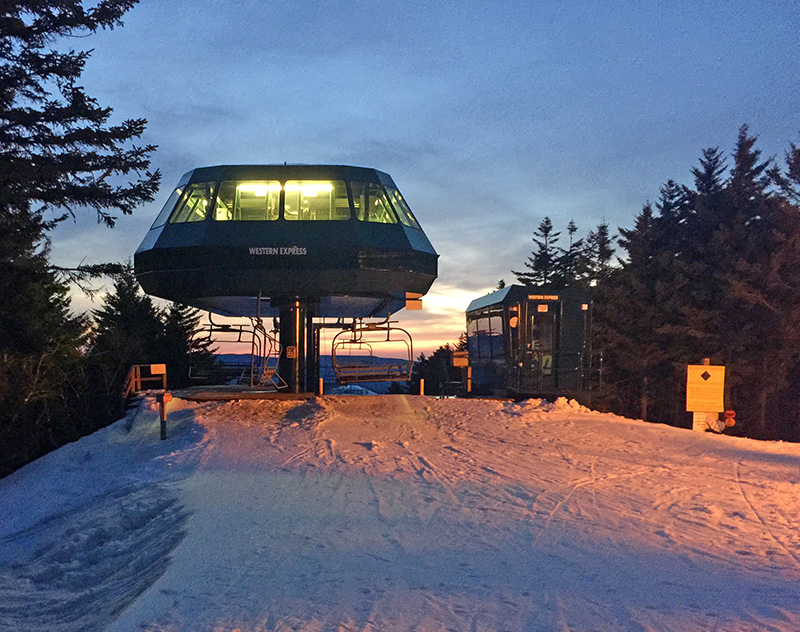 Dusk at the top of the Western Territory. Photo by Charles Sneiderman.

We had beautiful weather for our long drive, which took us through many of the state’s most spectacular natural attractions, including Smoke Hole Caverns, Seneca Rocks, Dolly Sods wilderness, Spruce Knob, and the Monongahela National Forest. We stopped briefly at the National Radio Astronomy Observatory in Green Bank and the historic town of Cass with its narrow gauge logging railroad; both are within a half hour drive of Snowshoe and offer daytime alternatives to snow sports on the mountain. 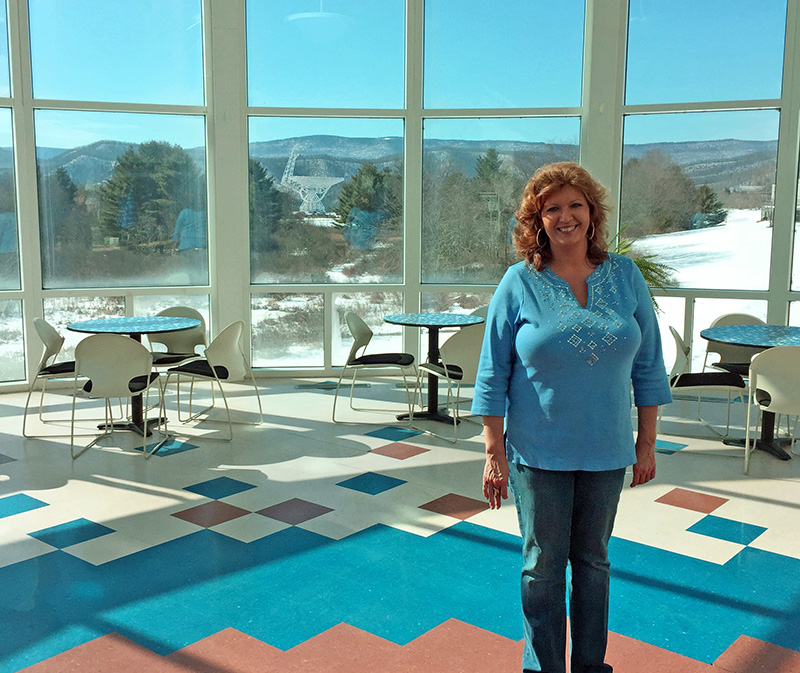 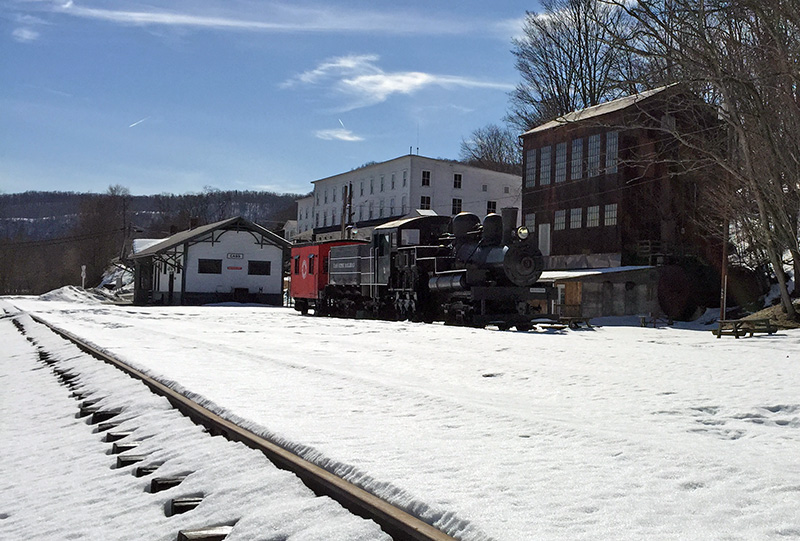 In addition to its convenient location immediately adjacent to ski lifts servicing both sides of the mountain, the Corduroy has a Tuscan-themed Alpine Ristorante in the building, the Line Shack for lunch, and the adjacent Trailside Cafe for a quick breakfast. The Corduroy has only 12 units and they are in high demand. The first floor has hotel rooms which are disabled- and child-accessible; the upper floor has loft suites. You climb a winding staircase to get to the loft, but the large, comfortable bed is worth it! We stayed in a studio suite; one bedroom loft suites are also available and can sleep up to eight. All units have gas fireplaces framed in local stone. All have satellite TV and high-speed wireless internet. Each suite has a phone with free long distance service; that turned out to be essential to us because cell phones service is very limited at Snowshoe to avoid interference with the nearby National Radio Astronomy Observatory. The bath and dressing areas have thermostat-controlled heated flooring and heated towel racks. Construction of an onsite fitness center and outdoor salt water hot tub will begin this year. 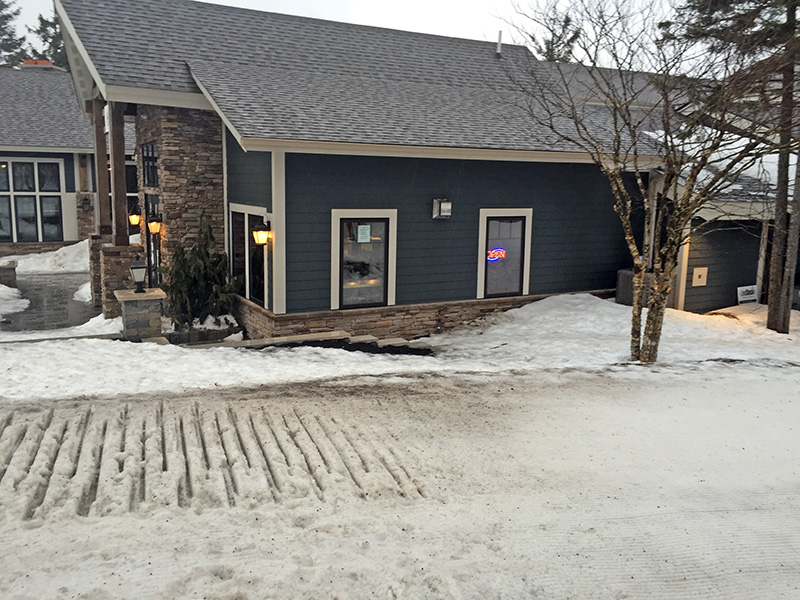 Trailside Cafe is conveniently located at the crossing between the top of Powder Monkey and the Western Territories lifts. Photo by Charles Sneiderman.

The rooms were cozy, which proved to be beneficial on a foggy, windy, and rainy day. We looked across the tops of the snow-covered pine trees as they swayed in the wind. Charles had looked forward to trying high performance skis from the Mountain Adventure Center on Cupp Run, but the skies opened before the slopes opened and dampened his enthusiasm.

The rainy weather washed away our plans to ski, but we were pleased to spend some time with David Begg and his staff of instructors at the Adaptive Sports Center housed at Snowshoe’s adjacent Silver Creek area. They are in partnership with Challenged Athletes of West Virginia. David has directed the program for over 30 years. He has a leg amptation as a result of an accident in the early 1980s, so he teaches from experience. This year 18 wounded military veterans participated in the center’s Warrior Weekend event in late February. Friends and family members brought the total hosted by the resort to 65. 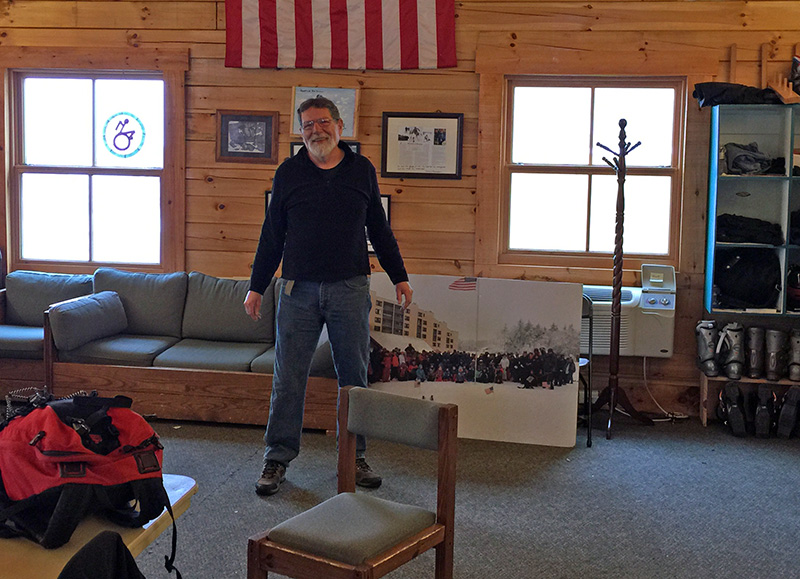 The other opportunities available to guests at the Corduroy include visits to the Spa and Split Rocks Aquatic Center with its heated indoor-outdoor pool and hot tubs. That’s the way to get wet at Snowshoe and really enjoy it! Snowshoe hopes to keep the ski slopes open until the first weekend in April. This has been a record season for them opening the day before Thanksgiving with over 300,000 visits to the lifts. There are numerous activities all year. Many of the homeowners and staff live and work at Snowshoe all year, providing a real sense of community. 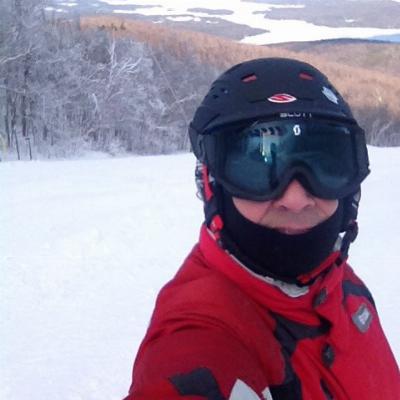 Connie, what property did the Corduroy Inn replace?  Is it by the Whistlepunk Village or did it replace the Yodeler's and the old Red Fox?  There aren't many square feet of construction space available there.

According to the current property manager, it was the Whistlepunk Inn, then the Vantage Inn, and now the Corduroy Inn.

Excellent photos and report about some alternatives for off-slope activities.