If you want to experience skiing the way it was back in the day… and by “back in the day” I mean the 1960s and 1970s… then Hurricane Ridge is the place for you! Photos from the 1960’s show pretty much the same set up that still exists today, just not as many straight skis and leather boots. The Hurricane Ridge Ski and Snowboard Area has been operating since the late 50s in pretty much the same fashion that it is still operating today, which is pretty cool. 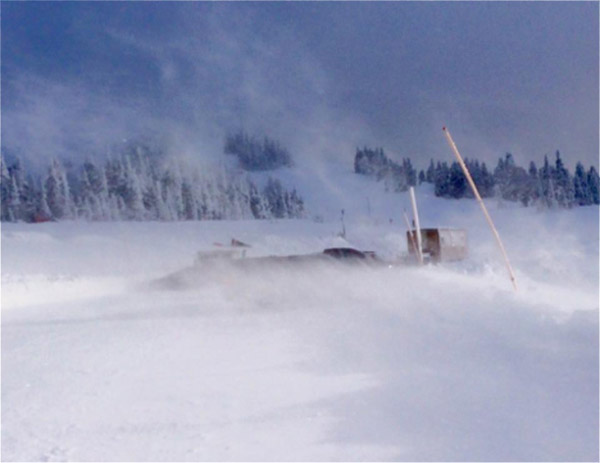 It’s called Hurricane Ridge for a reason! The trailer is where lift tickets are sold. Photo by Robbie Allen.

Located high above Port Angeles in Washington state, a twisty 17 miles into Olympic National Park, the area is one of three in the country operating wholly within a National Park. The National Park service maintains the road and operates a Ranger Station/Lodge nearby but is not directly involved in the operation of the ski area. The ski area is run by the Hurricane Ridge Winter Sports Club as a non-profit. Keeping the lifts turning is a true community effort. The Club also runs the lessons, does the grooming, mans a ski patrol and organizes a race team. We should all thank these folks for their efforts as Hurricane Ridge offers some great skiing in a spectacular location.

Hurricane Ridge has 3 surface lifts (2 tows and a poma). The front side has the bunny slope, small tubing park, and one “intermediate” run. The run is off a very steep rope tow that zips up 400 feet in less than 30 seconds. What people forget about old school skiing is that it is a lot of work. It takes real effort to hang on! After a couple of runs I could feel it in my arms. Also the friction of the tow melts any snow on your gloves and the icy tow line can get “slippy” fast. Getting 10 runs in here was a real work out.

Nice view from the top of the intermediate slope off the rope tow. Photo by Robbie Allen.

The backside bowl off the Poma lift is where the real skiing is. It is kind of an in-bounds backcountry with a variety of open terrain on which to pick a line. Snow fields, trees and chutes abound. The highlight of the area is a wide steep slope called The Face. This slope offers 800 feet of vertical fun, however doing laps here requires a bit more effort than at a more modern ski area. The Face is only accessible by a 20-foot slide step up off the top of the intermediate tow. Thus to get to The Face from the bottom of the backside bowl, it is up the Poma — which is as smooth as a bucking bronco, then skate up a catwalk to the slippery rope tow, and then a steep hike to the top of the run. Lots of old school effort is required! But the reward was worth it as untracked lines abounded. 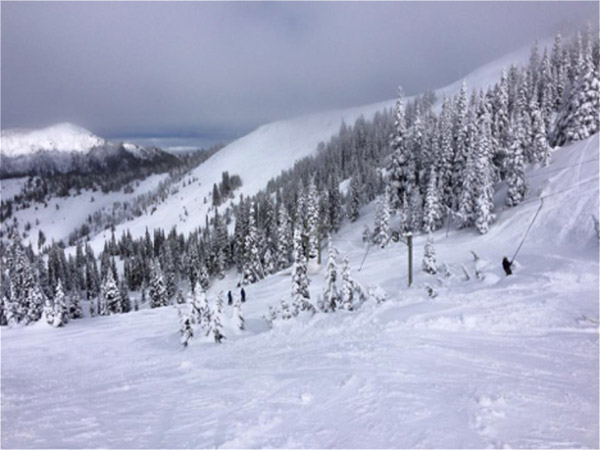 The Face above the Poma lift in the back bowl of Hurricane Ridge. Photo by Robbie Allen.

A note about the snow, 20 fresh inches fell in the week before my trip. The ski area is only open on weekends so untracked patches abound. However as Hurricane Ridge is only 5,240 feet above sea level and only 20 miles from the sea, the snow has higher water content than average. Thus the “powder” is more like “Sierra Cement” than Utah’s “Champagne Powder.” Again, very old school, thus it takes more effort to get those turns in.

All told I was able to get in a good four hours on the hill until all that old school effort in heavy snow had done me in. Overall Hurricane Ridge is a great experience. The scenery is amazing and the skiing is fun but tiring. If you are in the Seattle area it is worth the effort to get there and get some old school turns in!

Thanks; I enjoyed that.  I have seen the area in summer, and liked its look, but have never skied there.  I love places like that.  And, Olympic is one of the greatest national parks.

I also enjoy skiing "quirky small " ski areas. Hadn't heard of Hurrticane Ridge or I would have already skied it.

There are two others in the Pacific Northwest that you'd probablyenjoy:: Mission Ridge in Wenatchee, WA., and Hoodoo, OR. which is located on top of a Cascade Mountain pass about halfway between Bend and Portland.