How nice would it be to have a local ski mountain with over 200 trails and close to 4,000 feet of vertical as close as Liberty Mountain? What if that mountain received over 429 inches of snow a year and was open almost all year long? What if that mountain was mostly a day use area with limited development and pristine views? Well if you live in Portland, Oregon, that is pretty much what you have in your backyard! 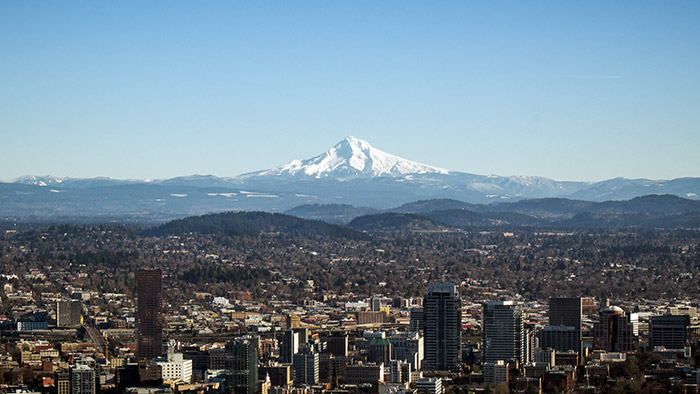 On a rare clear day, Mount Hood looms over the city beckoning the snow obsessed to come up the hill and play. Mount Hood boasts no less than five independently operating ski areas, all an easy drive from anywhere in the city. This winter I skied all of them in a weekend!

Now unlike the Mid-Atlantic, the Pacific Northwest has been hammered with winter weather this season. Thanks to the weak La Niña weather pattern, snow totals have been off the charts. Mount Hood has been no exception. The February weekend I skied, all resorts were close to 100% open in mid-winter condition.

Beginning my weekend on Friday afternoon, it was only appropriate that I start my skiing adventure at the oldest ski area on Mount Hood. The Summit Ski Area was built in 1927 and is the oldest ski area in the Pacific Northwest. With a mere 350 feet of vertical drop, it is a small hill that would look more in place in Upstate New York or Vermont: a one-lift wonder that is the perfect place to take your kids or coworkers who want to “try” skiing. As a result, it is kind of a feeder hill for the rest of the local areas. Even better, they offer “Affordable Fridays” with lift tickets just ten dollars! 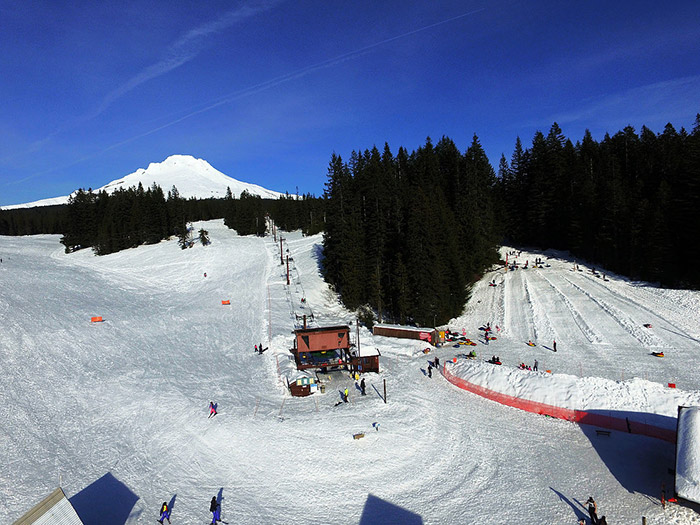 A few quick runs at the Summit were enough for me to check the box here and I was ready to move on. Luckily, I did not have far to go. Popping out of my ski and boots in my stocking feet while still wearing my helmet and gloves, I drove across the road to the Mount Hood Skibowl less than a half mile away. I was ready to ski again in less than ten minutes.

Mount Hood Skibowl boasts the largest night-skiing area in the country. Almost half of the ski area’s 65 runs and 1,500 vertical feet are lit for night skiing. If you were looking to get some runs in after work, the Skibowl is where you would come. 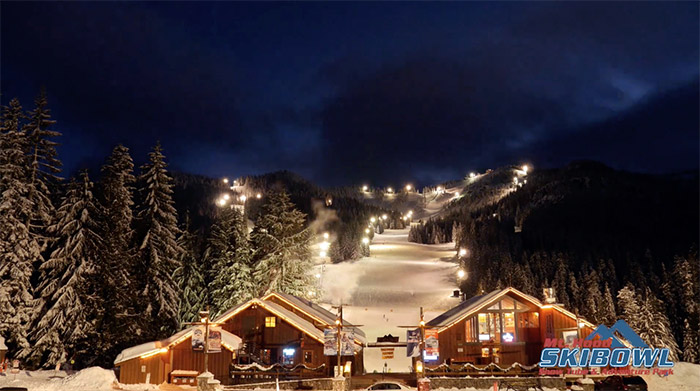 It is a fun hill! Operating out of two base areas, there is plenty of terrain to explore, even at night. Thanks to all the recent snowfall the coverage was excellent. The snow was fast but not icy. I recently started skiing on some wider skis (Atomic Sugar Daddy’s). This night I found that this Mid Fat ski was perfect for busting through any crud left over from the day session. If there is a drawback to night skiing at Mount Hood Skibowl, it would be the lifts. Nary a high-speed quad in sight. The ride back up the hill can begin to grind, so after a few hours here I felt that I got my lift ticket’s worth and called it an night.

So, this is the point in the story where I tell you I went further up Mount Hood and stayed at the historic and plush Timberline Lodge, enjoying a fine dinner of fine Northwestern Salmon with an excellent chardonnay, followed by brandies in the fireside bar. Then a nice night’s sleep in one of the fine rooms. But that is not what happened. Instead, I stayed at a motel down the mountain with a number in the title and had dinner at McDonald’s. Hey, lift tickets are not cheap; you have to cut costs where you can! The important part is that at seven the next morning, fueled by some indy coffee shop brew, I was headed back up the mountain to ski some more. 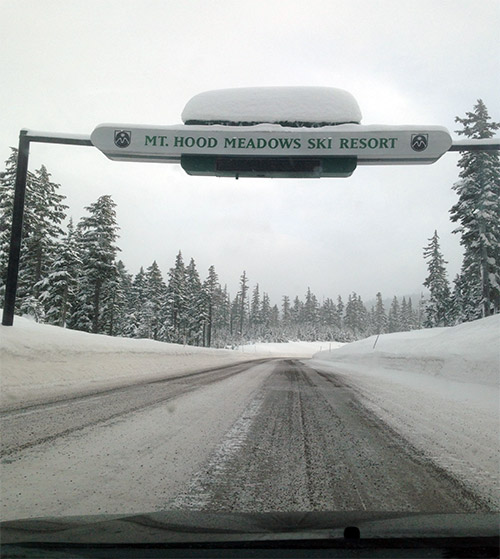 My destination was the true skier’s destination of Mt. Hood Meadows. 87 trails off 11 (including 6 high-speed) lifts. If you are coming to Mount Hood to ski — really ski — then Meadows is where you come. Located on the far eastern side of Mount Hood, the Meadow is a bit of a drive, as you have to drive past most of the other ski areas to get there. Nevertheless, the drive is worth it. The Meadows is a solely day use area. The base area is spartan but adequate, kind of like Whitetail in the early days. 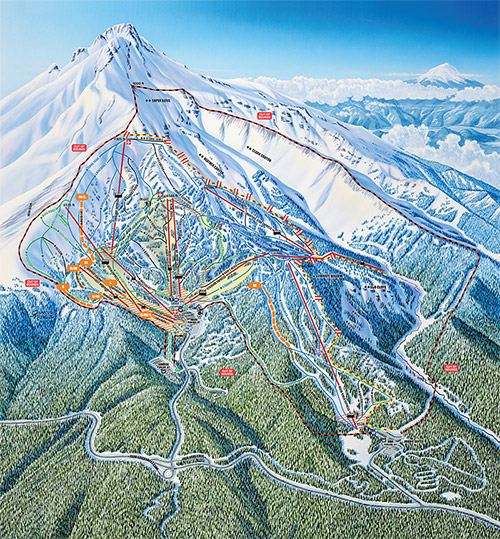 The Meadows is all about layout. The base area around the lodge can be crowded. The key the locals will tell you is to “go high and go wide” to find the best terrain. They were not wrong. The Meadows has some of the highest lift-served terrain on Mount Hood. Most of the major lifts are high speed and the runs up high are true thigh burners. You can rack up some serious vertical in a short period of time. The scenery is truly amazing. The Meadows is a truly excellent ski area.

After a leg-burning day here, I headed bit further around the mountain to tiny Cooper Spur Mountain Resort to sneak in a few more runs. Opened in the late 1920s, it is another small family-oriented feeder hill. There are 5-6 runs coming off one double chair. I had been here before and what I liked about it is the tent. It has a tent set up next to the tiny lodge. The tent is like a day lodge extension. During the day, the tent is packed with families with coolers of food for the kids and beverages for the adults. I did some quick laps on the hill and fortified myself with some fine organic brew from the coffee bar in the tent and headed back down the mountain.

After another night in a number hotel, I was back at it for my final assault on Mount Hood. I had saved the famous Timberline ski area for last. Timberline is one of those famous must-see must ski areas in the country. Opened in 1938 it is famous for its almost year-round skiing on the Palmer glacier. It was a bluebird day when I arrived on the hill and Timberline did not disappoint. 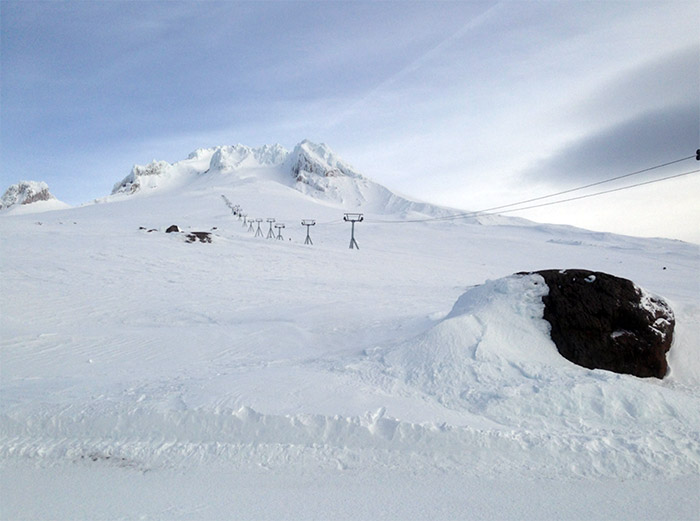 The Palmer Glacier on Mount Hood, accessed by a snow cat in the winter. Photo by Robbie Allen.

Timberline has 42 trails off seven lifts. Most of the terrain is solid intermediate — mostly lots of long, wide cruisers. It was just what my sore legs needed. What is great about Timberline is the possibility to ski almost 4,000 feet of vertical in one run from the Palmer snowfields to the Government Camp base area. The Palmer glacier is lift-served most of the year, but in winter there is too much snow. So, the area is accessed via a free snow cat ride! After exploring the cruisers for a while I capped off my weekend with that top to bottom run of over three miles. I smiled the whole way!

Overall I wish I lived in Portland. Not because I am a pierced, tattooed, skinny jean-wearing hipster: I am not. No, I would just love to have Mount Hood in my backyard! In fact, I think we all would!

Thanks Robbie.  Great story.  I'll be going to Hood for an annual hut trip in the second week of May.  We stay in the Silcox hut at 7000', located near the bottom of the Palmer snowfield.  There will be about 20 of us and about half will make a summit attempt.  I am a skier, not a climber but every year I look forward to skinning up to about 10,000 and a ski down from Crater Rock.  The pitch is a bit steeper than the Palmer, but it is the vast expanse, its volcano-ness (is that a word?) that makes it awesome.  I've been doing this annually for about 20 years.