Going Further Afield: Off the Beaten Path at China Peak 2

So if you’re reading this you’re a snow sports type and you probably already know that California has some great ski areas. You probably have heard of the major resorts around Lake Tahoe. Or maybe you know that you can ski Mammoth Mountain in the Eastern Sierras almost year round. You may even know that there are some temperamental ski areas in the mountains that ring LA.

But beyond these, there is a hidden gem you probably have never heard of. Tucked into the High Sierras, on the wrong side (western) of the mountains, lies the China Peak ski area. It’s off the beaten path, but worth the effort to find. 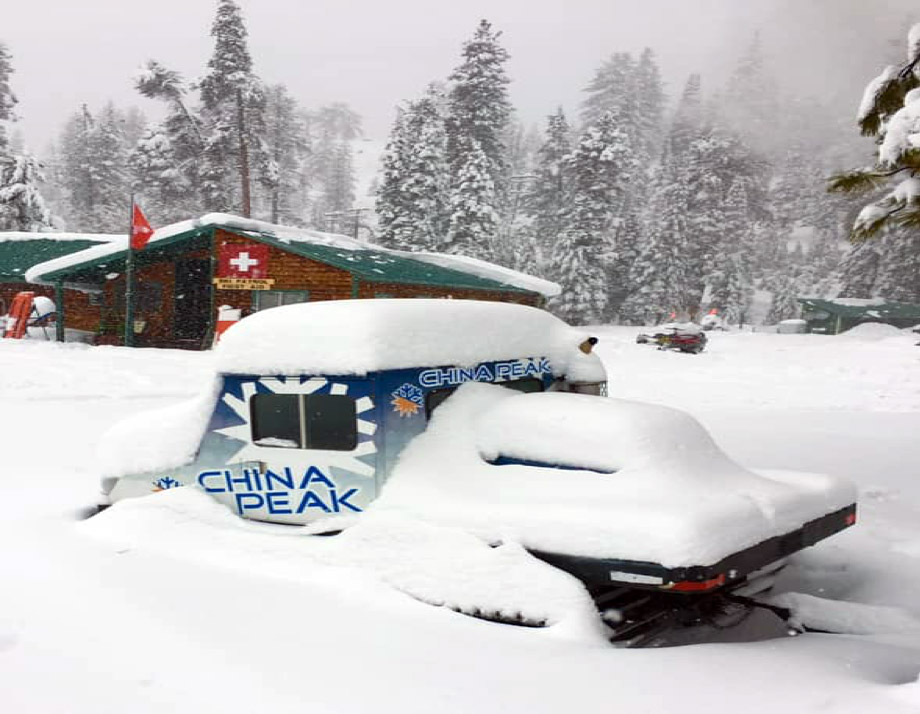 Deep Snow in the High Sierras. Photo by Spencer Allen.

Founded in the 1950s, China Peak began life as Sierra Summit. The lifts have been turning on this hill for over 60 years. Walt Disney was one of the original investors. However, the area was never “Disneyfied.” The area has the feel of a remote high hunting lodge than a mouse-worthy resort. There is limited lodging and the base area is more of a collection of outbuildings than one big lodge. It reminded me of a smaller version of the Kirkland ski area, which is about 200 miles to the north.

China Peak draws its name from the 8,000-foot Chinese Peak on which the ski area is located. There are 45 named runs on 1,200 acres served by 11 lifts. The best part is that the average snowfall is 300 inches per year. So when it is on — it’s on!

However, for the past few years it has been hit and miss. I have been trying to ski China Peak for the last decade. With the decade-long drought California has been suffering, the weather has been fickle at best. This past Super Bowl Sunday, the stars aligned and I was able to finally make it to the hill. 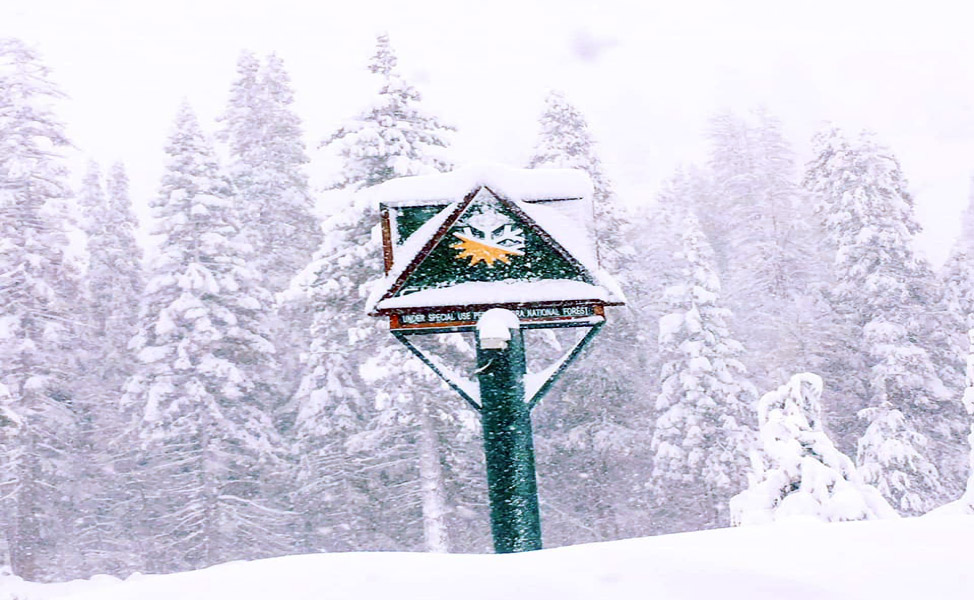 When it is on, it is on. Photo by Spencer Allen.

My son is a “First Year” (they are no longer called Freshmen) at Cal Poly in San Luis Obispo, a mere 2-hour drive from the ski area. However, for me flying into LAX, it was 3 hours from LA to SLO to pick him up, then 2 more to the ski area. That makes for a long drive in a rental car for a day trip, but in hindsight, it was totally worth it.

Also note, like most Western areas in snowy weather, chains are required to be in the vehicle even if you have four wheel drive. Cal Trans even has an inspection station on the highway, where they will ask to see your chains. Also note, Walmart will only take unopened chains back. So if you need a lightly-used set for a Subaru Crosstrek, let me know…

The first thing you notice when you start the climb into the Sierras are the trees — they are huge! Sequoia National Park is nearby and these are those trees. They are amazing. We arrived in the middle of a 4-day storm. The area was expecting 3-4 feet of snow before the end. At least 2 had fallen when we arrived, and it continued during our visit, sticking beautifully to the trees. 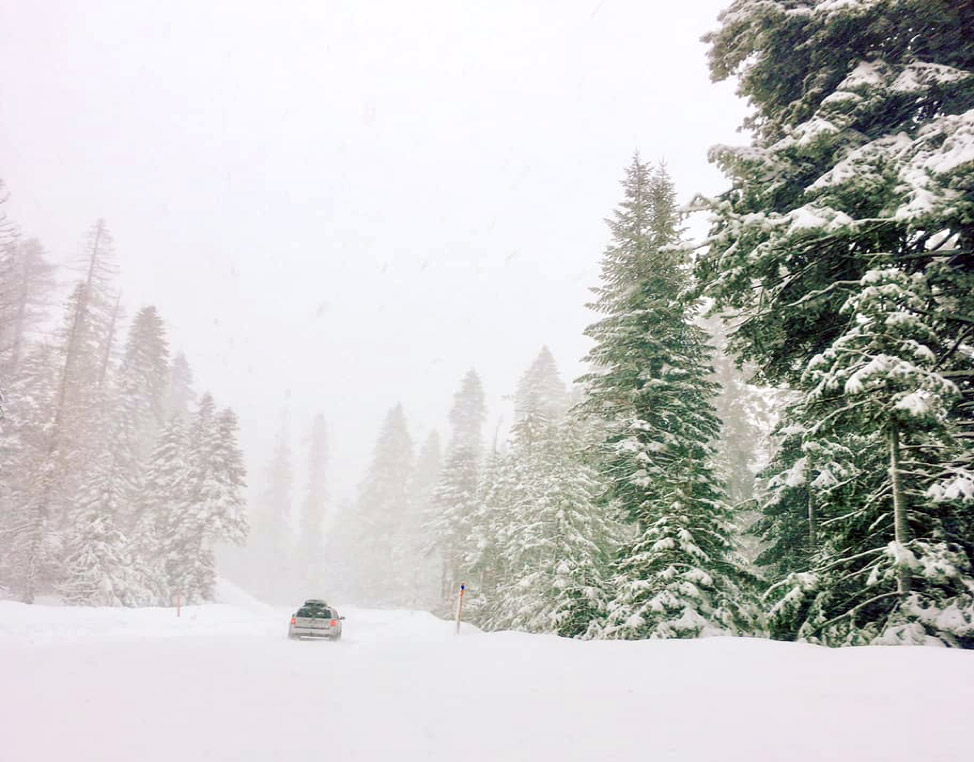 The trees are bigger than they appear. Photo by Spencer Allen.

The appeal of China peak is that it is remote. Thus it is a little rough. The lifts are slow and grooming is rare. Customer service is a bit of an afterthought. I found a kind of “ski it if you can” attitude from the staff. But the snow is the show. 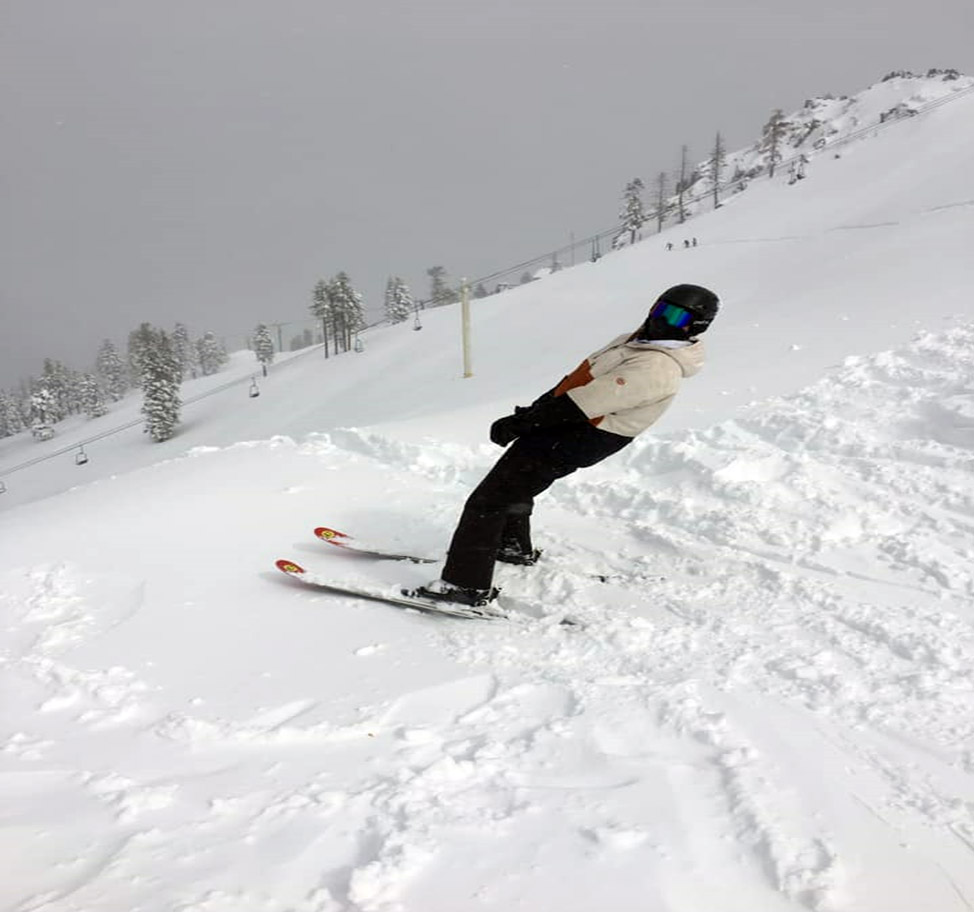 Be sure to lean back when skiing powder! Photo by Robbie Allen.

We both brought our boots but upgraded to powder skis for the day. When we started there was only one lift running, a slow “naked” (no safety bar) double. In the first 90 minutes we only managed 3 runs. The snow was very, very deep, but super wet. Temperatures were around freezing. True Sierra cement! Thus it was a challenge to make turns. We both fell and struggled to get back up several times. The powder skis were not cutting it, so we headed in and swapped for some all-mountain skis with the hopes of being able to turn. 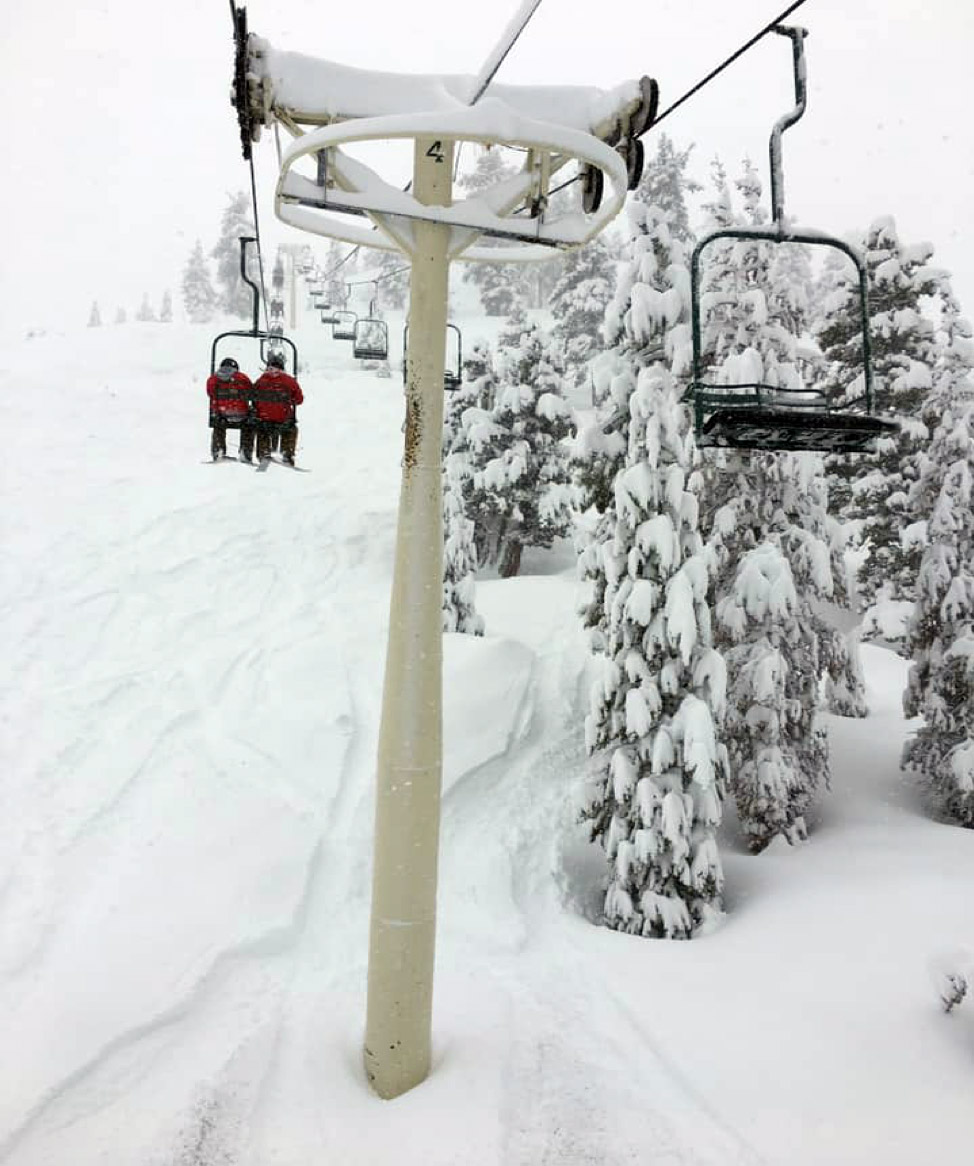 The swap did the trick. Turns could be made! Our timing was perfect as we caught the opening of Chair 6 and access to the upper part of the mountain. Here the higher elevation had a drying effect on the snow, and the “Sierra Cement” turned into light powder. We claimed first tracks on the upper mountain, whooping and smiling the whole way. 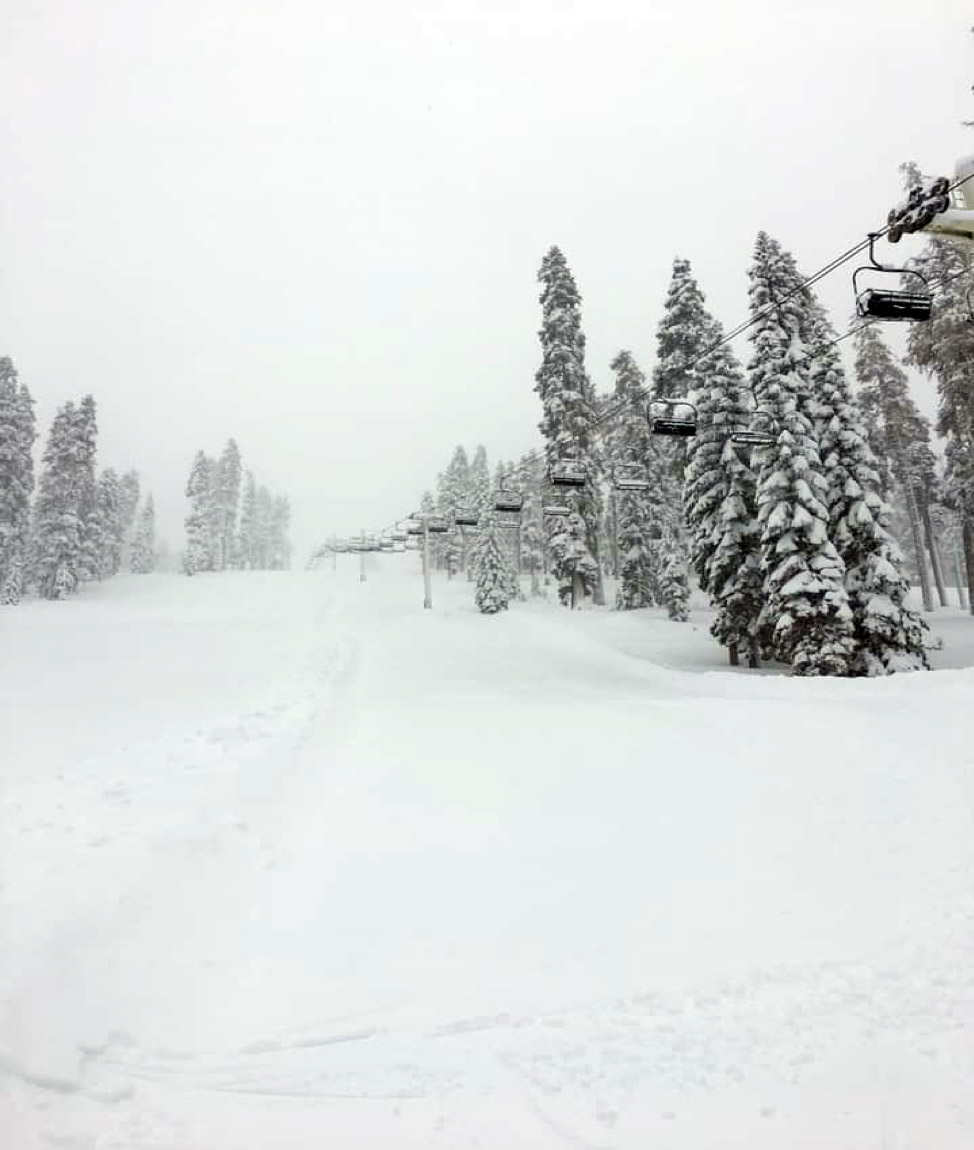 We worked this chair for awhile and loved it. Fresh powder was everywhere. We ventured across the top of the mountain and skied down to Chair 7 only to discover it was closed. This resulted in a 20-minute hike back to Chair 6. However, the snow was so good that we quickly decided that the hike was worth the “freshies” so we made some runs and some hikes for a while. 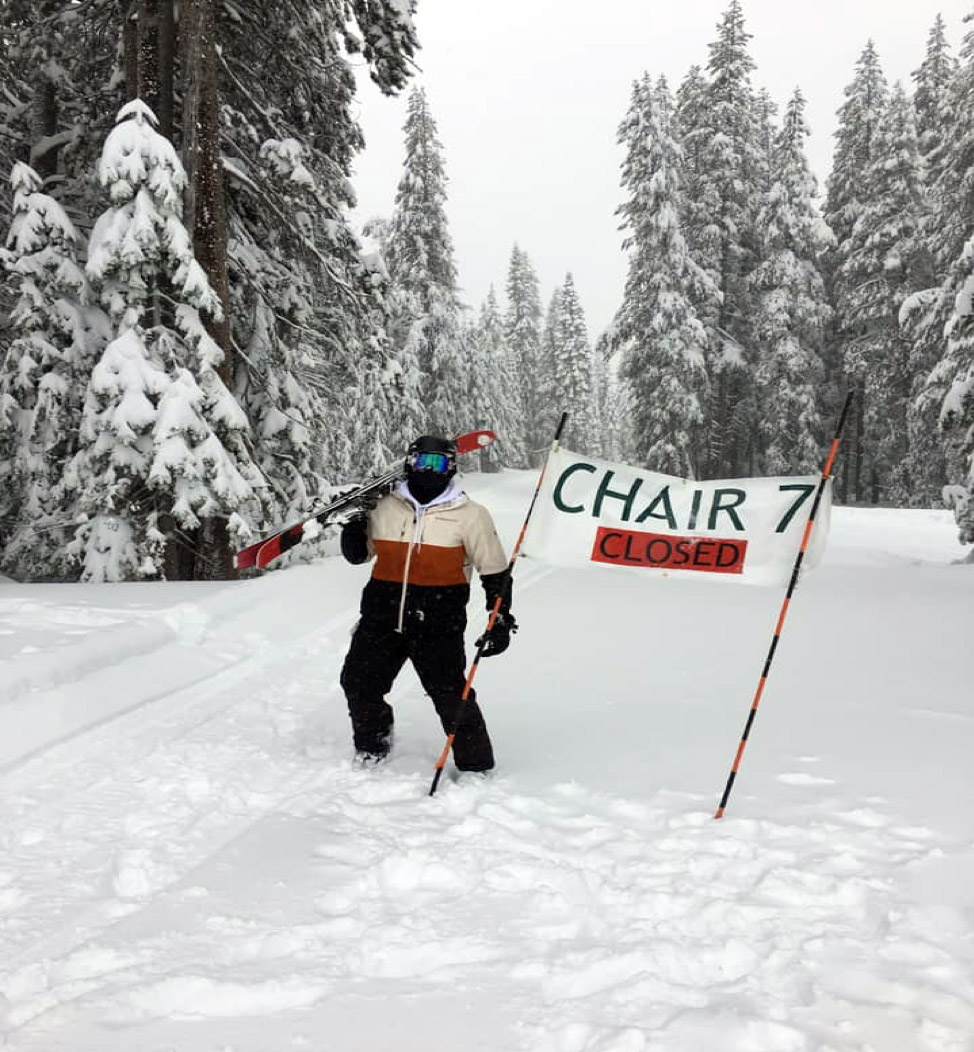 The “First Year” hiking back from Chair 7. Photo by Spencer Allen.

After a bit we noticed the snow was changing to rain. Already wet and tired from 5 hours on the hill, we called it a day. Although we only had a mere 10k of vertical, it was a hard fought 10k.

Overall China Peak is a good time. They do suffer from lack of infrastructure. At one point we were stuck in the lower chair for 20 minutes when the resort’s power failed. Like most of the ski areas today, they are short staffed due to newly-imposed Visa restrictions. So much so that they were only able to get two of the eleven lifts up and running on the weekend. But ski it if you can, as if conditions are right they have the goods!

Oh, “our” team lost the Super Bowl, but like most LA fans, we were too busy doing something else to notice. 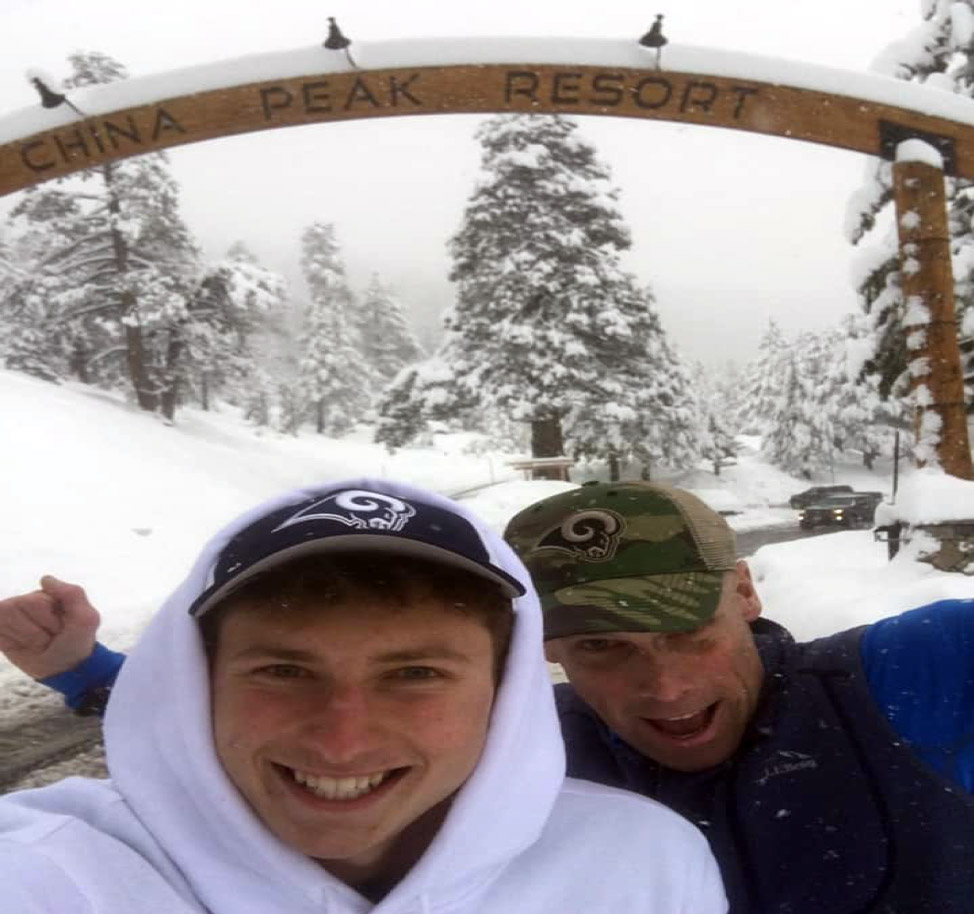 LA Rams fans were too busy doing other stuff to watch the game. Photo by Spencer Allen.

Man, that was a seriously snowy road warrior effort!  China Peak got bombed with about 6 more feet of snow in the first week of Feb 2019.

Thanks Robbie.  I’ve done Dodge Ridge and Bear Valley, and the gem of the LA Basin, Baldy.  Looks like I need to do China Peak.  BTW I’ve never been asked to show chains in the Tahoe area.  With AWD and snow tires, I’ve had no problems.  I’ve been told that this happens as you get closer to LA.  Cal trans chain inspectors are Seasonal and in SoCal you can get one whose first sight of snow was 3 weeks ago.