When a friend living in Colorado asks, “Hey, my mom owns a condo within walking distance to the Steamboat Springs Gondola, wanna come out for a few days of skiing?”

The condo was a three bedroom, three bath unit and my good, no GREAT, friend Mel also invited some other friends from DC — two couples, Chuck and Michele, and Ken and Connie.

The five DCers, including myself, flew out to Steamboat Springs and met Mel just as she arrived at the condo. It was well appointed with a large living room, kitchen, dining room and a fireplace. After unpacking we piled into Mel’s SUV and made a run to the grocery store for supplies. As luck would have it, the liquor store in the same shopping strip was offering a free wine tasting. A free place to stay and free drinking — Steamboat Springs Rocks. 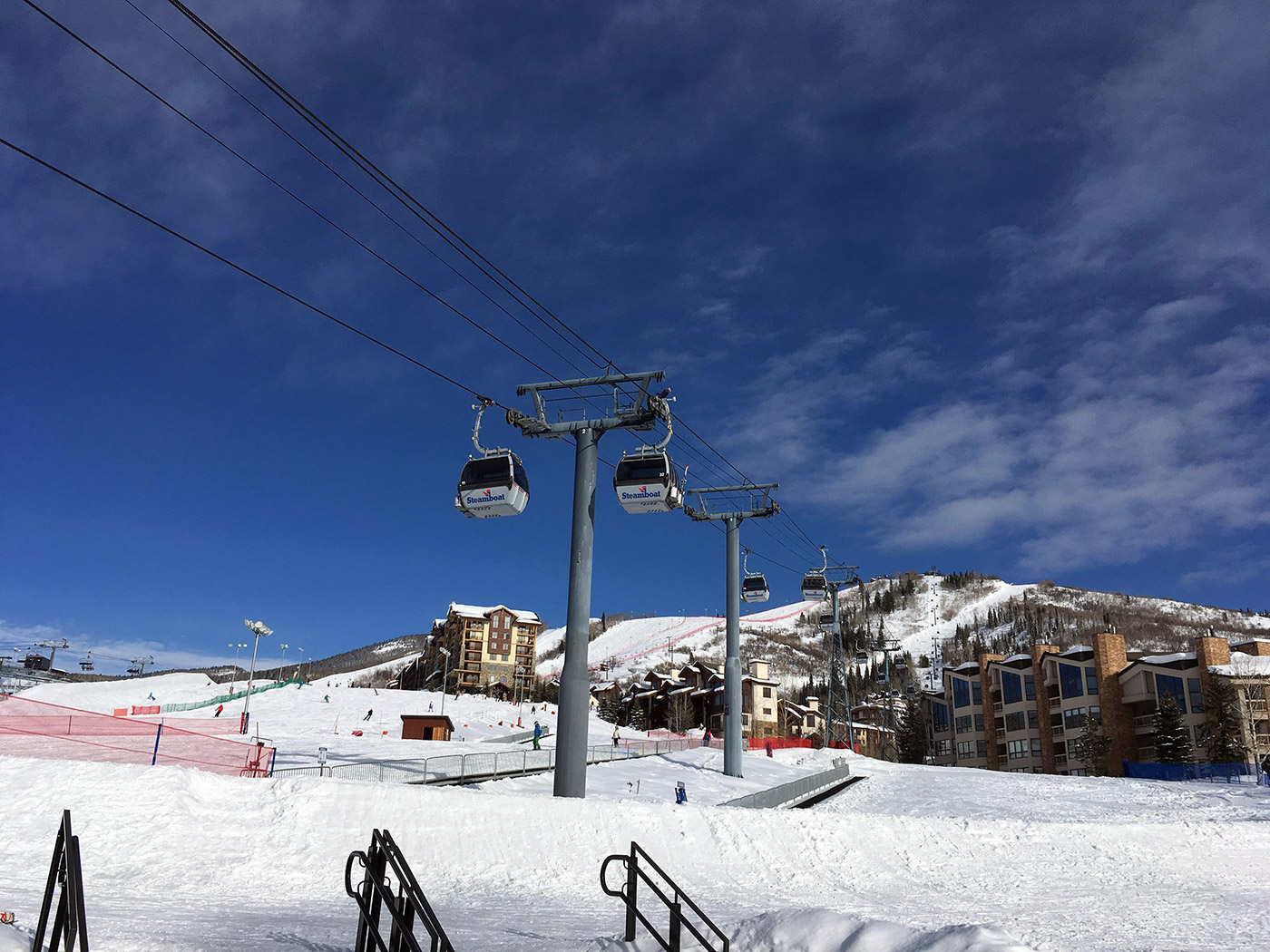 The following morning we booted up in the condo and trudged the two blocks to the lift. Mel’s other friends wanted to take it easy for the first day and warm up on some green runs. And Mel… well, Mel doesn’t take it easy. At least not when it comes to skiing. She and I boarded the gondola at 8:45 a.m. and rode it to the peak adjacent the Thunderhead Lodge at 9,082 feet. Steamboat, like many large resorts, features a variety of mountains at different elevations. There are 169 trails, eighteen lifts, a total vertical drop of 3,668 feet and 2,965 skiable acres. Mel and I zoomed down a few blue and black runs and then worked our way to the top of Storm Peak at 10,372 feet. My goal was to squeeze out twenty-five runs for the day. Back here on the East Coast that’s an easy task. However, a big mountain where most runs are at least twice as long would require a serious commitment to fun. Luckily most of the lifts at Steamboat are high speed quads.

The Storm Peak trails were a total blast! The intermediate Buddy’s Run cut down through a swath of tall pine trees. The Advanced Storm Peak North slope was wide and open with a beautiful view. The other trails were aptly named such as: Tornado, Twister, Vortex, Cyclone, and Typhoon. Mel and I traversed the resort via connecting to a blue/black run named Sunnyside. Mel said that she really liked the Blue/Blacks. And I did too — the combination of just the right steepness, without the scrapey-ness of some of the more advanced terrain, made for easy exhilaration.

Another lift jetted us up to Sunnyside Peak. Here the mix of blues, blacks and blue/blacks were named for “time” — trails included One O’clock, Two O’clock, Three O’clock, High Noon, Daybreak and Rolex. Mel and I kept trying to get onto the blue-black Two O’clock and somehow kept missing it and ending up on One O’clock or High Noon. By mid-day we had gotten in fifteen runs. Mel’s friends texted and said they had stopped for lunch. Mel had no interest. She had an energy bar with her and wanted to keep skiing. We arranged, however, to all meet up for a Bloody Mary and the Four Points Lodge at 2:30. It was purported to have the best Bloody Maries in Steamboat.

Mel and I were having the times of our lives skiing fast and getting lost on new terrain. As it was a Saturday, the lift lines were occasionally long. And when they were, Mel and I would ski into the “singles only” line and still usually end up on the same chair. We worked our way back across the various peaks to Four Points Lodge at 2:30 with 21 runs under our belts. The lodge was packed. But we got lucky and snagged a large table just as a group of skiers left. I grabbed the drinks as Mel texted her friends. They were all back at the condo sitting in the hot tub. What? It was a gorgeous day for skiing. Did they think they were on vacation???

The Bloody Maries were delicious and spicy. And with a full hour left in the day, she and I blasted out four more long runs finishing the day by skiing all the way from the top to the bottom, cruising on a green the last half of the way down. A perfect day of fun on the snow!

And the next day we enjoyed a different kind of fun on the snow — actually two different kinds of fun: Dog Sledding and Snowmobiling!

The six of us started out a beautiful, sunny Sunday morning at Grizzle-T Dogsledding. The many, many dogs were barking in a cacophony of happiness as we arrived. Then after a very brief introduction on how to steer the sled and use the sled’s two brakes, we broke off into three couples, with one person steering and the other sitting in the sled. 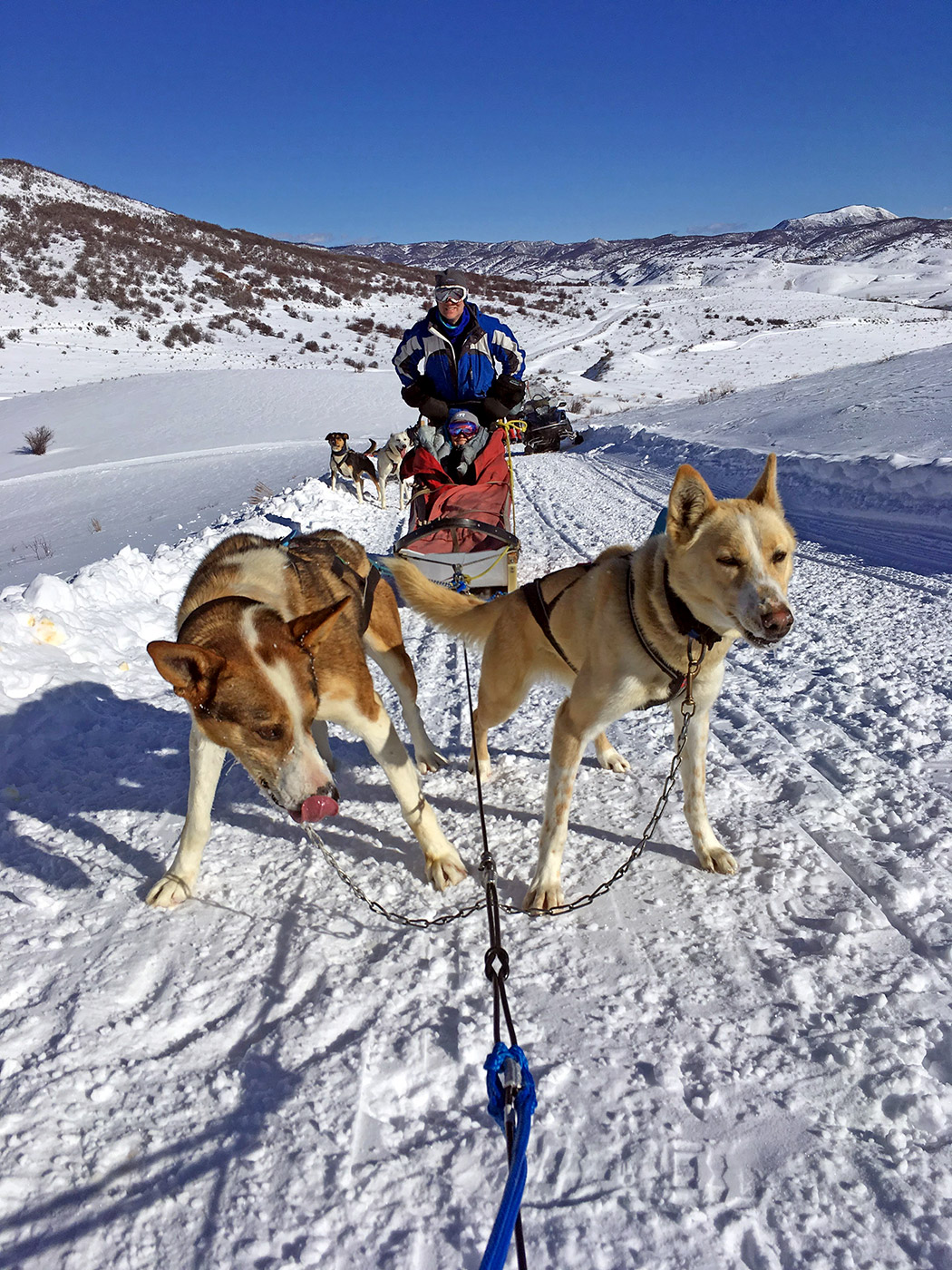 I took the first turn of steering as Mel climbed into the front of the sled and was covered in blankets. The sled was tied to an anchor as seven dogs were attached to leads at the front of the wooden sleigh. We were introduced to each dog. I have a tough enough time remembering people’s names — there was no way I would remember the names of the dogs. Once all of the dogs were situated for the three sleds, a snowmobile went out ahead of us. Mel and I went first. I had to stand hard on a metal brake that bit into the snow as the anchor lines was released. I gradually released pressure to allow the dogs to accelerate in a controlled fashion chasing the snowmobile. Ken and Connie, and Michele and Chuck followed in their sleds.

The whole trick we had learned was to not let the dogs go into a full out run, but rather use the brakes to keep the dogs at more of a trot. Another key factor was to not allow any slack in the line between the sled and the dogs. A separate rubber brake, basically a rubber mat with cleats also extended from the rear of the sled. It was used for lighter braking and more refined speed control. When the dogs steadied into a trot on the flat or up a hill, no brake was used. Otherwise braking adjustments were necessary.

A chase snowmobile followed the last sled out as we all sped along an open trail up and down several hills. To navigate turns one first needed to move to the outside of the curve and then lean in and shift the sled to the inside. Steering was simply stepping hard on the left runner to go left and the right runner to go right. I felt like I was crossing the Alaskan ice sheet. After about an hour, Mel and I swapped places and I sat as she steered. Steering was much more fun! We returned to the kennel as a total success. No one had tipped over a sled.

After lunch we returned to the condo for a brief rest and were then picked up by a shuttle from Steamboat Snowmobile Tours. The shuttle took us high up to a cabin surrounded by pine trees. A fleet of snowmobiles were parked outside the log cabin. We all broke up into pairs and were, once again, given a very brief lesson on driving. The main thing was that both the driver and passenger had to lean into the corners to keep the snowmobile from flipping. 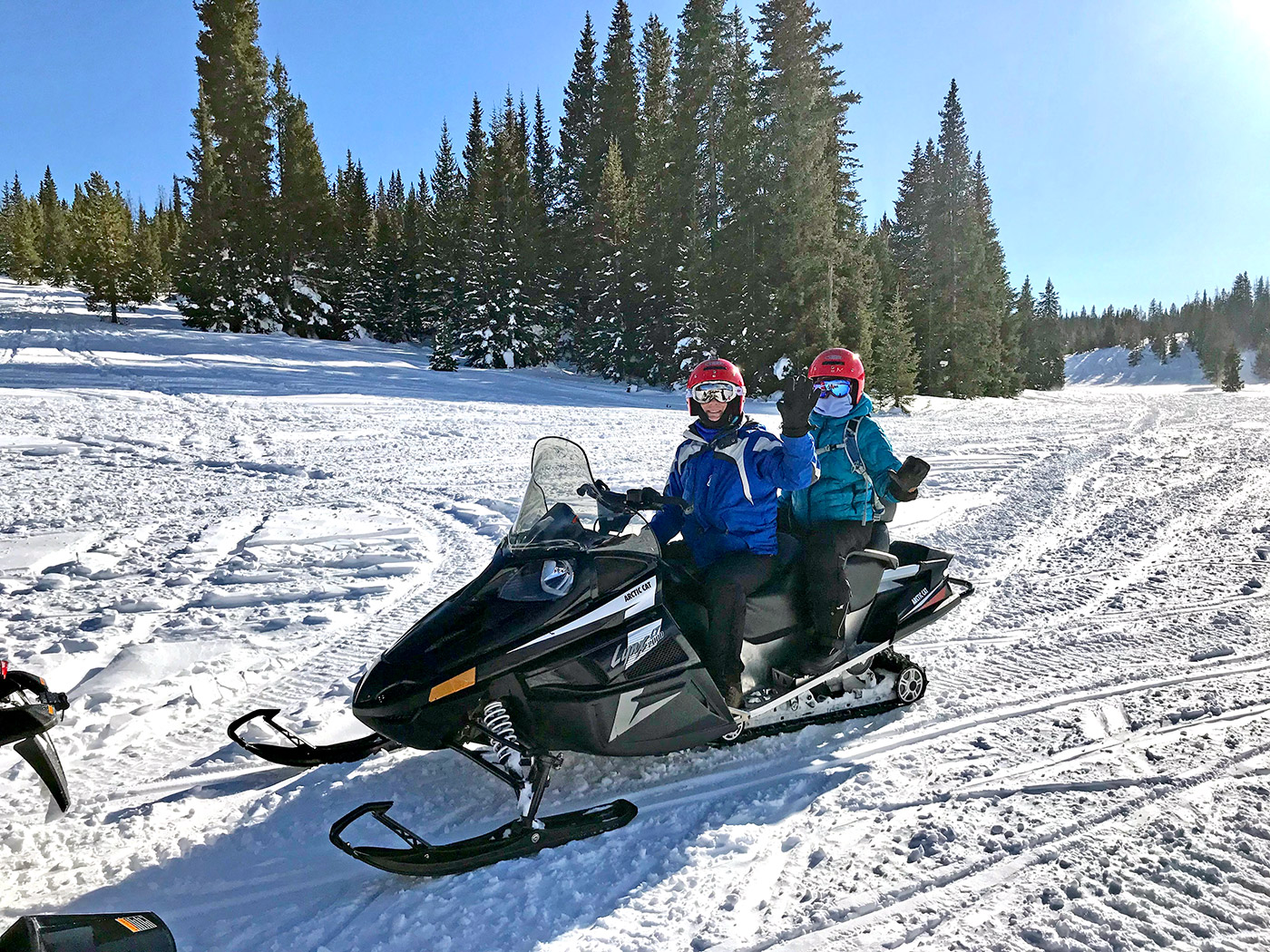 Matthew and Mel take a snowmobile for a spin. Photo by Michele Potter.

I drove first and followed the lead snowmobile out into the woods, with Mel’s friends and a couple of other snowmobiles finishing up our group. Unlike the dog sledding where we rode in open terrain, here we drove along narrow tracks and small snow-covered roads within the forest. After about a half hour of winding through the back-country roads we broke into an open meadow and stopped. The tour leader told us that we could make laps around the meadow at full speed to really get a feel for the machines.

Going fast around a curve required more than simply leaning. I had to slide the full weight of my body off the seat and into the curve. Mel and I went together for a few laps. Then we each took turns going solo. It was like NASCAR on snowmobiles. After twenty minutes of goofing off we resumed the tour and climbed up to a scenic overlook and parked. Below the overlook, several non-tour snowmobilers were trying to drive up the steep mountain face unsuccessfully. They’d get part way up and roll off to the side in the deep snow or turn around in a sharp one eighty. Eventually one guy was able to gun his way to the top to join us.

This was the halfway point and Mel and I switched positions. Again, being a passenger — not as much fun. We continued onto some more wooded trails to another open field. Once again we were told to play around. We sort of had a little unplanned race as we each tried to overtake the other drivers. It was plain stupid fun. After everyone had their fill of driving madly in circles, the tour resumed and we returned to the log cabin. And like with the dog sledding — it was complete success. No one flipped! Not flipping seems to be the goal for dog-sledding and snowmobiling. Well, that and having a whole lot of fun. 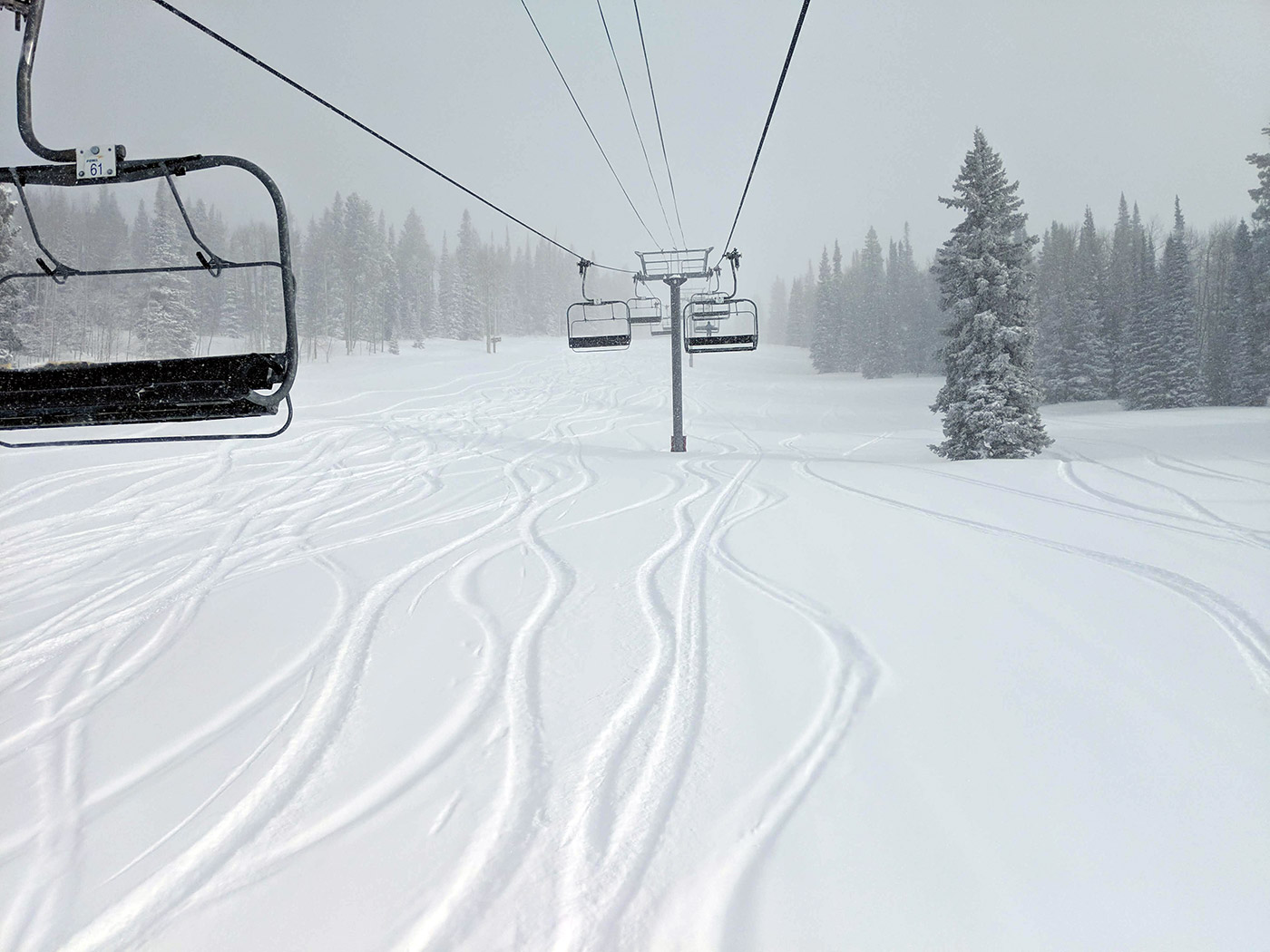 For our final day in Steamboat, we awoke to snow gently falling and several inches of fresh powder already on the ground. A pow-pow day. This time Chuck joined me and Mel. Connie, Ken and Michele created a separate trio. Oh the joys of making fresh tracks in the snow. It wasn’t quite Champagne powder. But it was pretty close — maybe a fine Chardonnay powder if there is such a thing.

The three of us started by working our way up to Storm Peak and then moving onto the “time” trails. Mel led us down Two-O’clock — our ankles buried as it continued to snow. After a few more runs the slopes began to become choppy. I realized that the skiing would become a little slower and I lowered my run count goal to fifteen. And somehow, the simple act of adding another skier to the mix slows things down — even though we skied at about the same speed.

By mid-morning the snow had stopped and the Colorado blue sky reappeared. And while I love going fast, there is also something wonderful about taking your time, connecting your turns, and enjoying the view as you ski. And the view couldn’t be better. By mid-day Chuck decided to join his wife Michele, while Mel and I sought out trails we had not yet done. And at Steamboat, there were way too many of them to even come close. But we easily made our run count for the day.

That evening we had dinner and wine in the condo and sat around the hot tub. It was such a spectacular trip we all agreed to make this an annual pilgrimage. 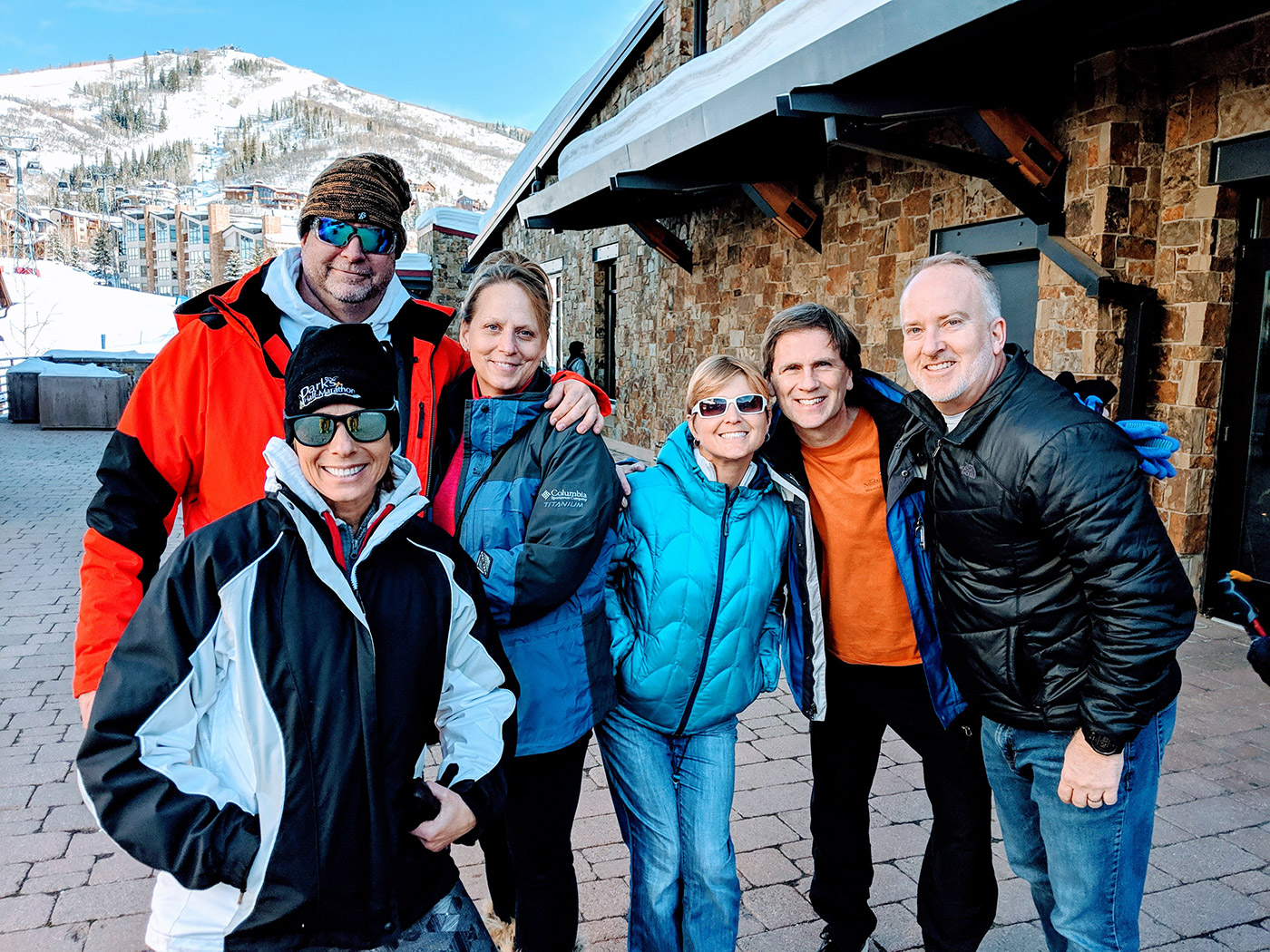 The group. Photo by Michele Potter.

Nice article Matthew. ? Did you take the direct United flight from Dulles? If so, how was it?