Usually when the spring skiing is good it is late March or early April — not really spring yet but not really winter. It is the true shoulder season. Roadside towns still have that dirty gray winter look. The sun may be out, but the grass is still brown. The spring flowers have not yet bloomed. There is still road salt and sand on the street gutters; the spring rains have not yet come to wash it away. Driving through towns with skis on the roof feels odd. It feels wrong. Townspeople give you a look that says “shouldn’t you be playing summer sports not and clinging to winter?”

In early Spring, 2017, I felt that way as I drove through Wenatchee, Washington on my way to ski at Mission Ridge. I felt like I was sneaking out of school. I was out playing the wrong sport. I should have been golfing or playing Frisbee in the sun, embracing the coming summer and not still clinging to winter. But cling I did.

The Mission Ridge Ski Area is located high above Wenatchee, Washington on the leeward slope of the Cascade Range. If you drive east from Seattle, it is where the Cascade Mountains stop. It is also where, given the West to East storm pattern, the rain peters out. The lush green landscape of the Pacific Northwest becomes the brown of the Rockies. Standing on Mission Peak at 6,820 feet looking to the West toward the ocean, the land is forested with tall green trees all the way to the coast. Looking to the East the land is brown and scrabbly. This is where the high desert begins.

On this fall line lies the Mission Ridge ski area. It may be the start of the desert, but the area still receives an average of over 200 inches of snowfall a year. Moreover, the snow is much “dryer” than what falls on ski resorts nearer to the Pacific Coast. There is no Cascades Cement here! The line also means the Mission Ridge ski area sees close to 300 sunny days a year. No snow fog here, either! 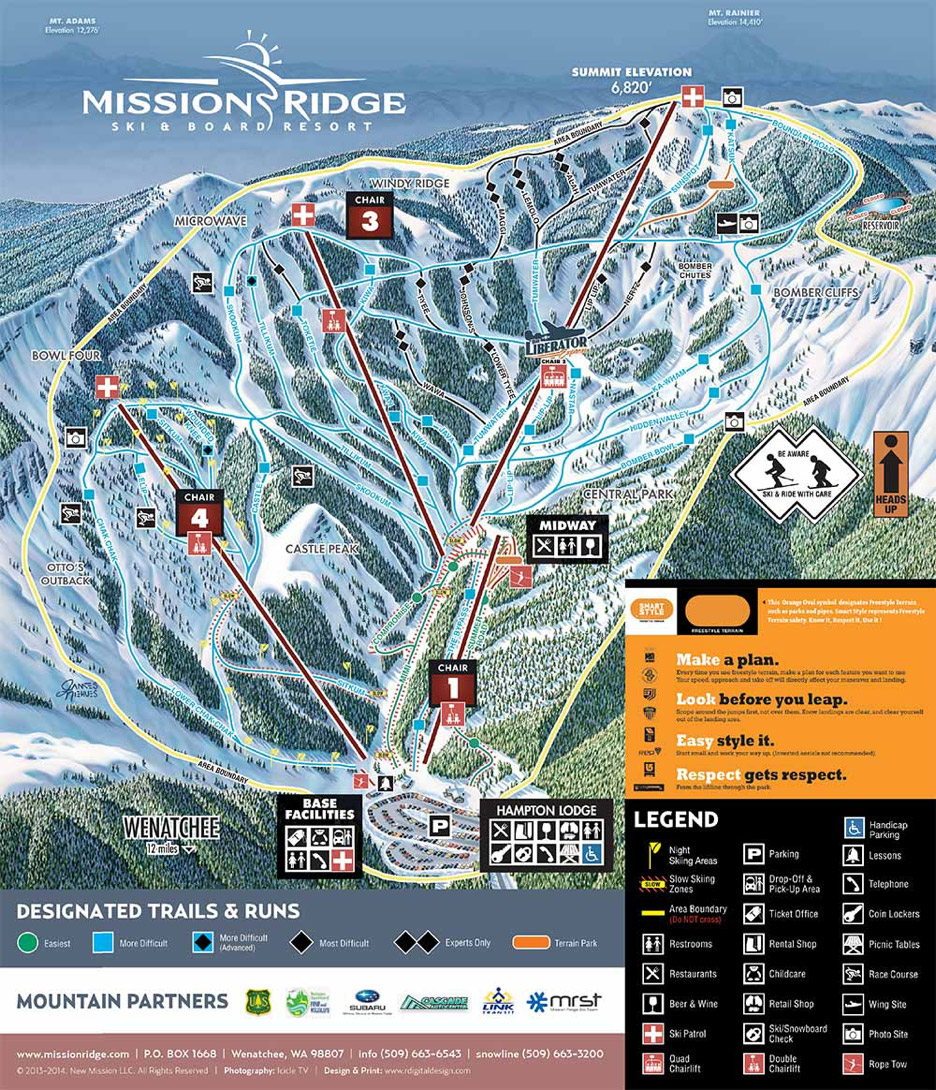 The Mission Ridge ski area has operated high above Wenatchee, Washington since 1966. It features around 30 named trails off six lifts for a very respectable 2,200 feet of vertical.

Mission Ridge gets its name from a B-24 Liberator Bomber that crashed here on a training mission in 1944. Parts of the plane were strewn about the mountain. In honor of the crew, the high speed quad lift is called the Liberator. A memorial to the bomber crew and a section of the wing are displayed on the slopes. Legend has it that rubbing the wing will bring snow to the resort. Back in the 80’s the wing was moved from the slopes to a bar in the lodge. However, after several years of poor snow, ski-hill managers mounted the wing back near the crash site and within an hour of the move it began to snow! 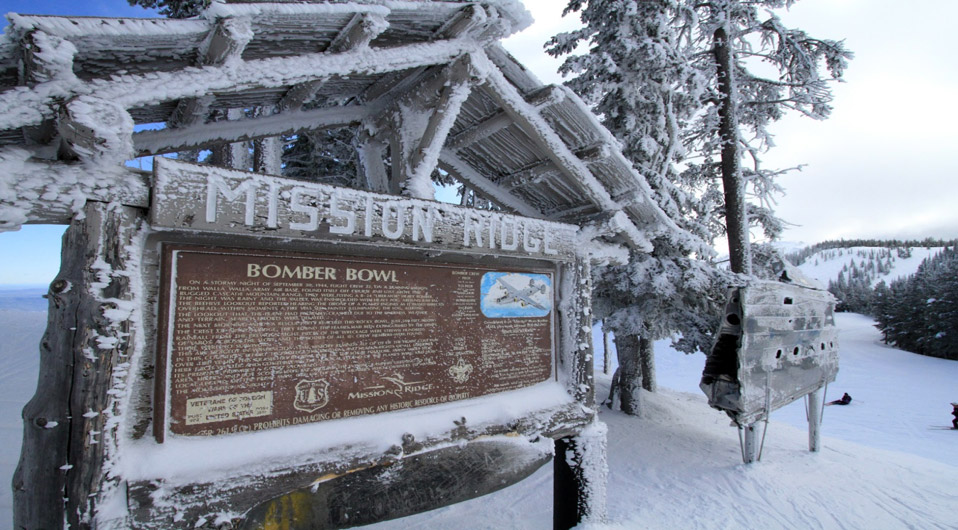 The day I skied I found my fellow “winter clingers” out in force. Yet I never had to wait in line for more than a few folks. The area’s slopes face north around a canyon so the snow holds up well. The majority of the trails are wide, fast blues. There is also hike-able terrain with some black chutes dropping through some steep basalt crags. On my visit, I stuck to the groomers for most of the day and was not disappointed. Working off the Liberator Quad through the Bomber Cliffs was a blast. “Bombing” from top to bottom can stack up the vertical and chew up the legs. 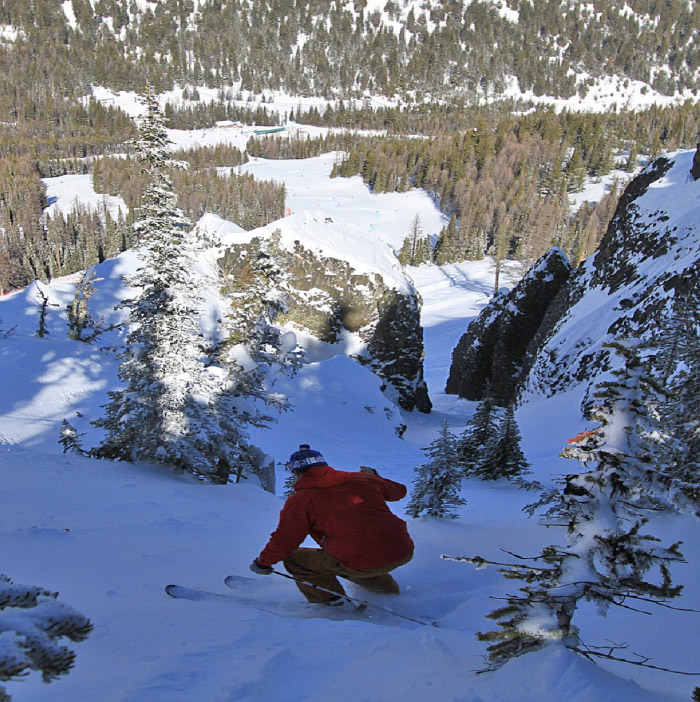 Unfortunately, the Quad does not run top to bottom. Skiing the whole 2,200 feet of vertical from summit to base requires a ride on the slower Chair 1 to get back to the midway and the Liberator quad to the top. The other chairs on the mountain are slower doubles, good for quick runs up higher. Chairs 3 and 4 access Castle Peak off the left side of the valley. The runs there are mostly solid blues and are lit at night for those who want to extend their day.

As any skier will tell you, spring skiing is where it is at! Soft snow and warm sun are great conditions. As the Blue Knob snow phone famously used to say, “spring skiing is like a church pancake supper. Just when the pancakes get good… no one wants anymore.” This day I had some great of pancakes!

Nice report. Interesting how the snow quality improves as you push east in the Cascades. Still, I am not sure I would drive from Seattle to Mission (over 15 hours according to Google) as opposed to skiing places much closer like Crystal Mountain, where I skied during the same approximate period last year. Similiarly, if I ever make it to Spokane, I would rather visit Schweitzer.

If you can ski midweek, no resorts are crowded in Washington in late March. So many treasures, so little time.

John, Mission RIdge is no where near 15 hours from Seattle. It's maybe 100-120 miles east of Seattle, buy it is not easy to get to

I've skied it twice and throughly enjoyed it. Robbie is right about the snow being drier than Cascade concrete or Sierra cement. Beware though it used to not be open 7 days a week -- don't know about now.

FIrst time I skied it was '93. I was on a quest to ski 20 different areas that season. So I flew into Seattle planning on 5 mountains in 5 days: Mission RIdge to Stevns Pass to Baker to Whistler to Crystal. It was a lot of driving.

When I entered it into Google maps, I was taken to a Mission Ridge 15 hours from Seattle””but that was probably during a bad rush hour. I entered it just now, and it said 3 hours. 164 miles from SEATAC.

I guess one has to always consider traffic in Seattle.