Despite owning a slope-side property, I had not skied at Timberline for two years at the onset of the 2020-21 season. During the 2019-2020 season, the resort never opened and the season before, it opened briefly with just a few thinly covered trails and then promptly closed. I hung in there, hoping that the resort would rise out of bankruptcy with a new owner committed to making modest improvements to the mountain. Never in my wildest dreams did I imagine that Perfect North Slopes would purchase the resort and invest significant capital into the place, literally transforming it overnight from a “lost ski resort” into one of the premier ski hills in the region. 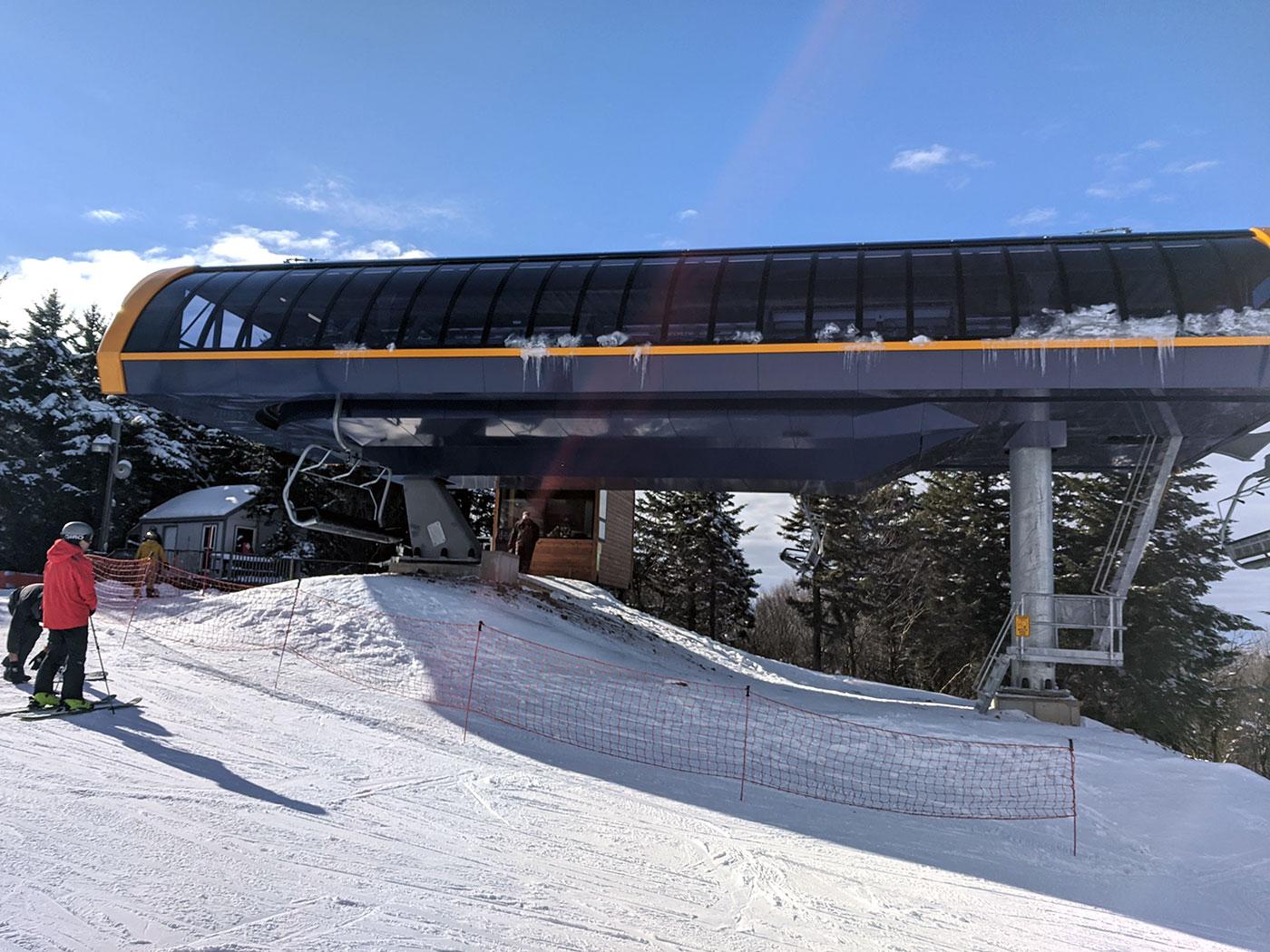 The new six-pack high-speed lift has put Timberline on a competitive footing with some of the best resorts in the region.

The most significant change is the new, high-speed, 6-person detachable lift — the only such lift in the state. Suddenly, one could get to the top in approximately 5 minutes compared to 15+ minutes in the past. It was now possible to get as many runs in a few hours as it had taken a day to make in the past. Built by Doppelmayr, the lift has a new, luxury car feel with its effortless, detachable loading and unloading, padded seating, and whirlwind speed.

Shorter lift rides mean less exposure to wind and harsh temperatures on cold days. Simply put, the new lift is a game changer for the mountain and now makes it competitive with Snowshoe, Whitetail, Seven Springs and other five star resorts in the region. For people lucky enough to be staying on the mountain, it means one can easily make multiple runs on a powder day before the crowds show up at ten in the morning.

On the powder days I experienced this season, it was all smiles early in the morning, both from long-time Timberline skiers like myself and those completely new to the mountain. These newbies were a different type of skier than I have seen in the past. Sporting their late model Nordica Enforcers, Patagonia jackets, and shiny helmets festooned with Deer Valley, Vail, or Les 3 Vallées stickers, these people were skiers accustomed to flying to world-class destinations but now trapped in the Mid-Atlantic due to the pandemic. 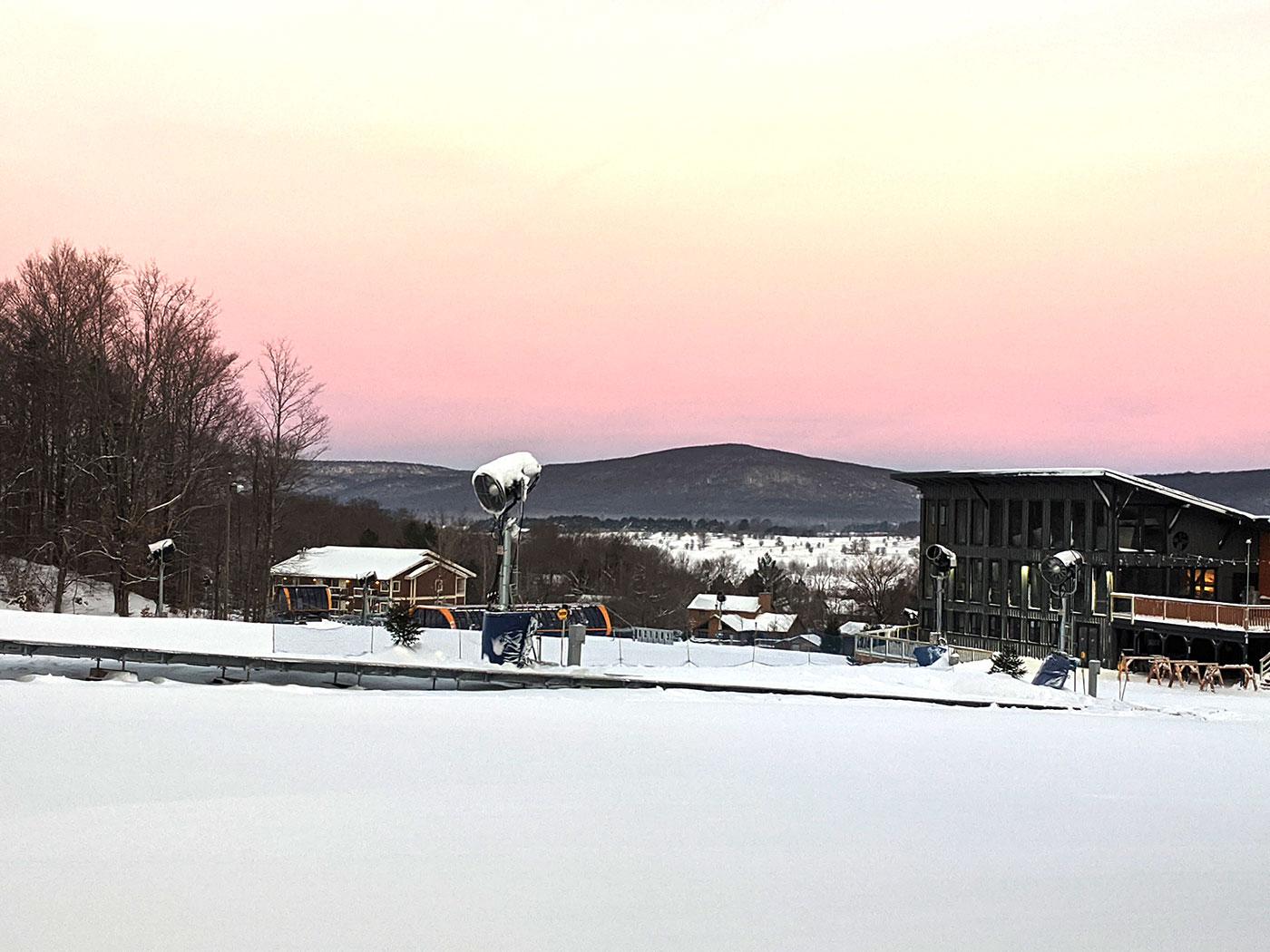 Snowmaking upgrades are likely to extend the season at Timberline Mountain.

Timberline Mountain (TM) has the most favorable microclimate of any mountain in the Mid-Atlantic with an average yearly snowfall of 125 inches and temperatures on average ten degrees cooler than DC. With that said, snowmaking and grooming still remain vital to its successful operation due to severe freeze/thaw cycles endemic to this region. We can have powder one day followed by rain and sheer ice — all in a 24 hour weather cycle. The improvements Timberline Mountain made to its snowmaking allowed the mountain to open more signature trails faster than any year I have skied the resort in the last twenty-one years! Moreover, the robust improvements allowed the resort to recover quickly from thaws and keep the major top to bottom trails open the entire season.

The most impressive thing about TM’s snowmaking is that they intend to continue making improvements this summer and perhaps future summers as well. These improvements will not only allow the resort to get more terrain open by Christmas in the future (perhaps 100%) but give this resort the snowmaking power to offer first class skiing when many other resorts have only minimal terrain or nothing at all. Snow is destiny.

Because of COVID-19, I did not spend any time in the new lodge this year, but from peeking through the windows and anecdotal conversations, it’s obvious that Perfect North Slopes has done a good job expanding and remodeling the lodge with more improvements forthcoming, especially in the area of food and beverage services. For the future, it would be nice to see a café, a sit-down restaurant open on weekend evenings for dinner, and perhaps a demo rental store. Being able to test drive new skis at Timberline would be great for a local ski store hoping to expand its business in the region. With such an amenity, DCSki might even consider reviewing a handful Mid-Atlantic appropriate skis each season.

Because of the lack of J-1 foreign workers this season and the pandemic, staffing was challenging for the ski industry but Timberline Mountain weathered the storm brilliantly. I was so impressed with the lift attendants and liftline staff. They had the unenvious task of enforcing mask and social distancing protocols while still keeping things moving. These mostly young people managed the crowds with aplomb. I cannot say enough good words about the lifties and I enjoyed chatting with them occasionally when the lift was not crowded. 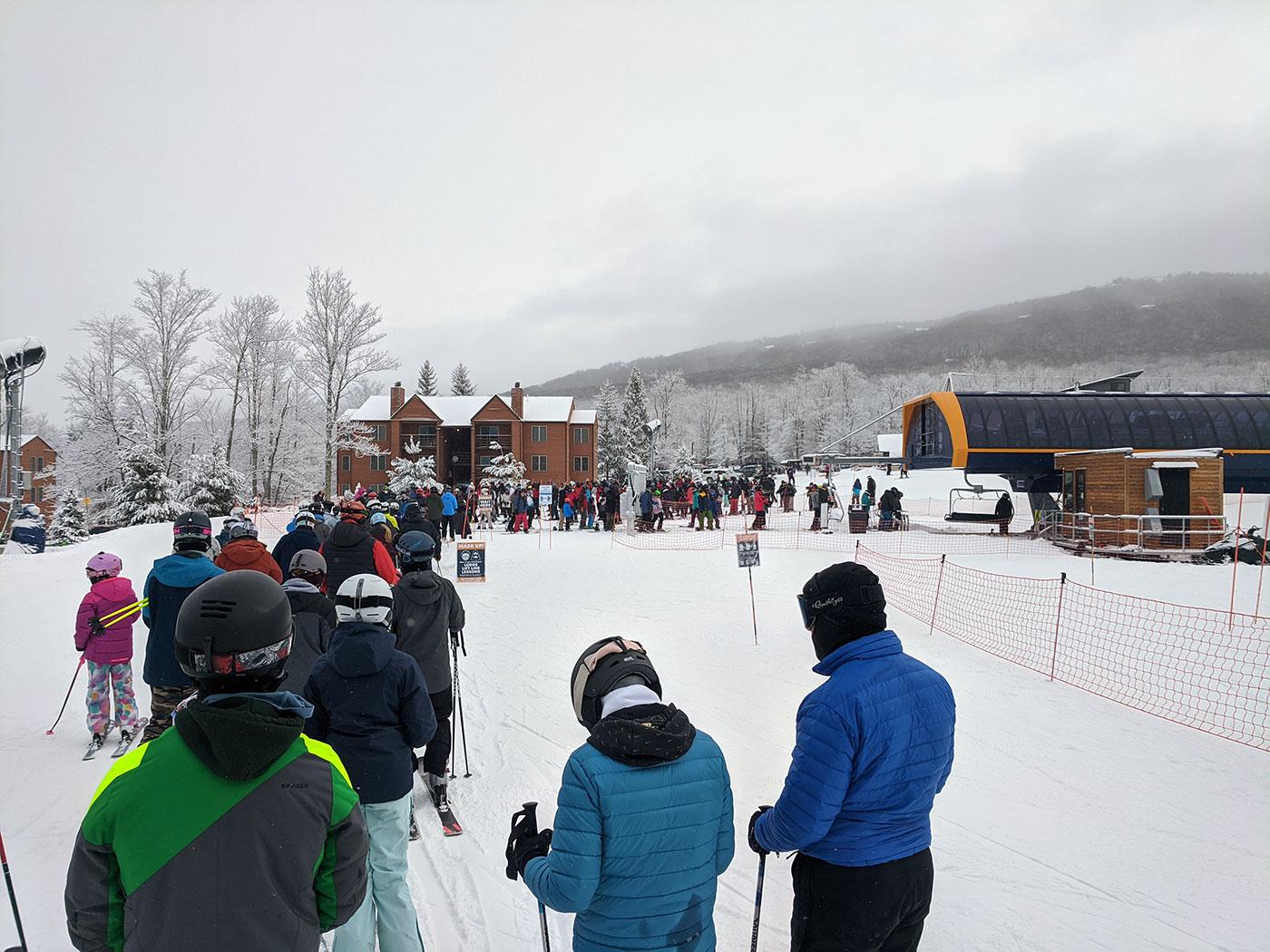 And I did I say “crowds”? I have never seen such large lift lines at Timberline. Skiers came to TM in droves. The difficulties of traveling to the Rockies, strict quarantine rules in Pennsylvania and in New England, and the new improvements to the resort drove huge numbers to the resort. Especially on Saturdays, waits could be over 20 minutes for the 6 pack.

In the short term, I expect some of the lift lines to diminish once social distancing protocols are lifted and the resort can fully load each chair and create singles lines. In the long run, the resort may want to consider adding a second top-to-bottom chair. A fixed grip running from the Mid-mountain Crossroad to the old Silver Queen top station would take some pressure off the 6-pack. Skiers starting at the base area could ride the existing fixed grip quad to the Mid-mountain Crossroad and ski to the proposed lift, which would service the steeper upper mountain and much of the advanced and expert terrain. Experts could simply lap the new lift, avoiding the crowded base area altogether. In the Spring, when the flatter base area gets slow and sticky, it would be nice to remain higher up on the mountain.

Another long term issue will be parking. Rumor has it that Perfect North has purchased or rented some land for additional spots, which may solve this problem, at least in the short term. Shuttles may be the answer long term. Many resorts like Stowe, Northstar and others are transforming parking lots to housing much to the dismay of locals. However, housing attracts destination skiers who tend to spend more money per visit than locals like myself, who ski multiple days on relatively inexpensive passes and rarely drop a dollar in the lodge. Housing and ski villages also bring much needed amenities such as more mountain dining options.

Speaking of passes, it will be interesting to see what Perfect North does in the future. It already lowered pass prices for 2021-2022 but thus far has not entered into any alliances with Epic, Ikon, or others. With hordes of skiers already visiting on weekends, this seems prudent. In fact, the resort might want to consider additional pricing schemes to limit weekend crowds (or start charging for reserved parking on Saturdays and maybe Sundays as well). The market for reliable skiing in the Mid-Atlantic is huge and I hope the resort can capture as much market share as possible. 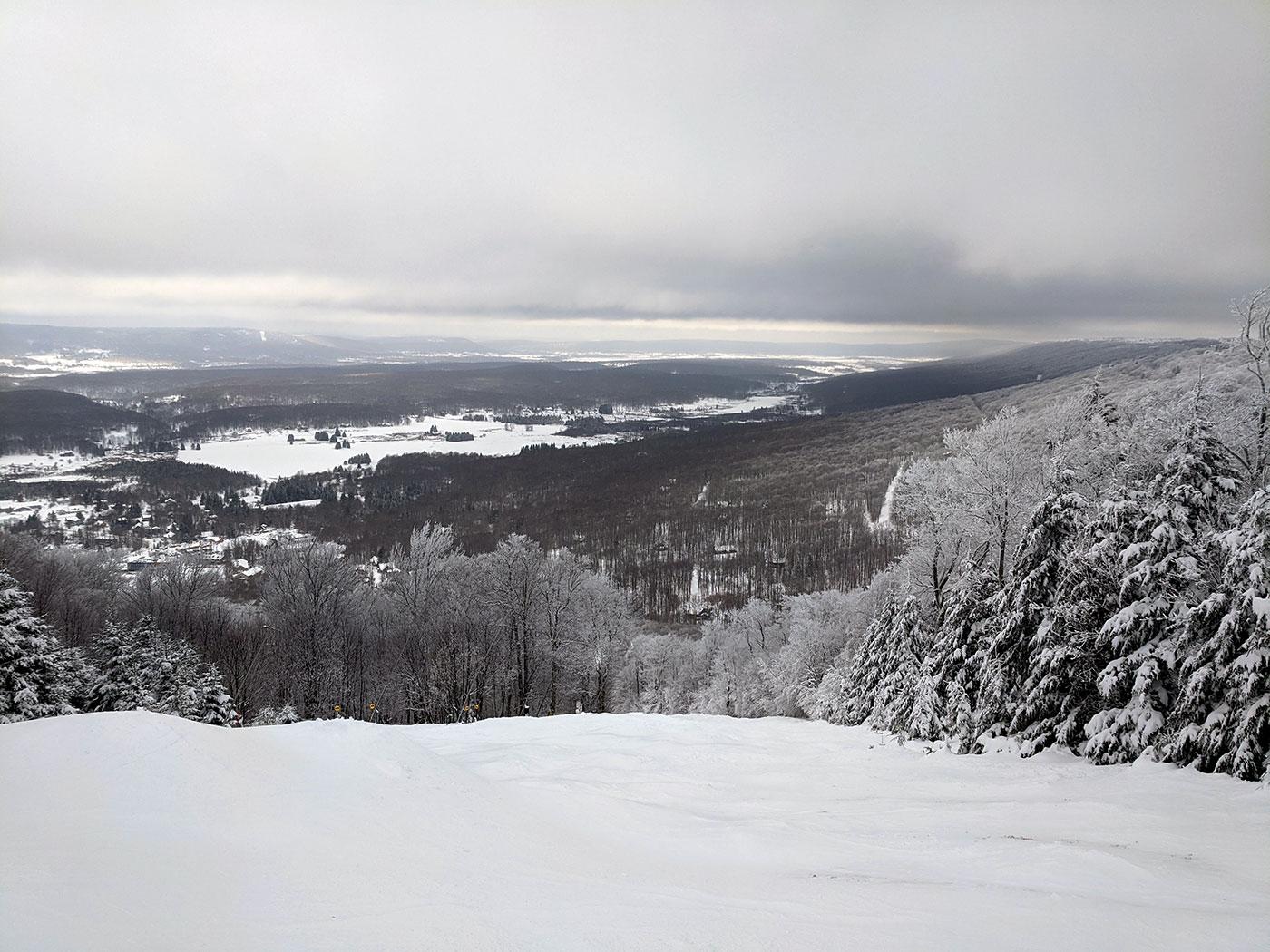 Ample snow and great views make Timberline a favorite of many Mid-Atlantic skiers.

Timberline has always had the best ski terrain and climate in the region, and now with first-class management and proper capitalization, the resort is on a path to become a true destination resort. Abundant natural lands make the place a true four season destination for other pursuits as well, including hiking, mountain biking, fishing, hunting, bird watching, and golfing. Given what happened with New River Gorge, the dream of the Dolly Sods Wilderness (situated just east of the resort) becoming a national park is not inconceivable.

Davis, already seeing a lot of revitalization, will soon see more houses being remodeled plus additional restaurants and other amenities on Route 32. Tucker and Grant counties will host the Virgin Hyperloop Certification Center, which will bring many more jobs and services to the community. Will we see Whole Foods opening up soon in Davis? I think not but the town may slowly evolve to resemble a resort town and not the old logging and mining town of old. 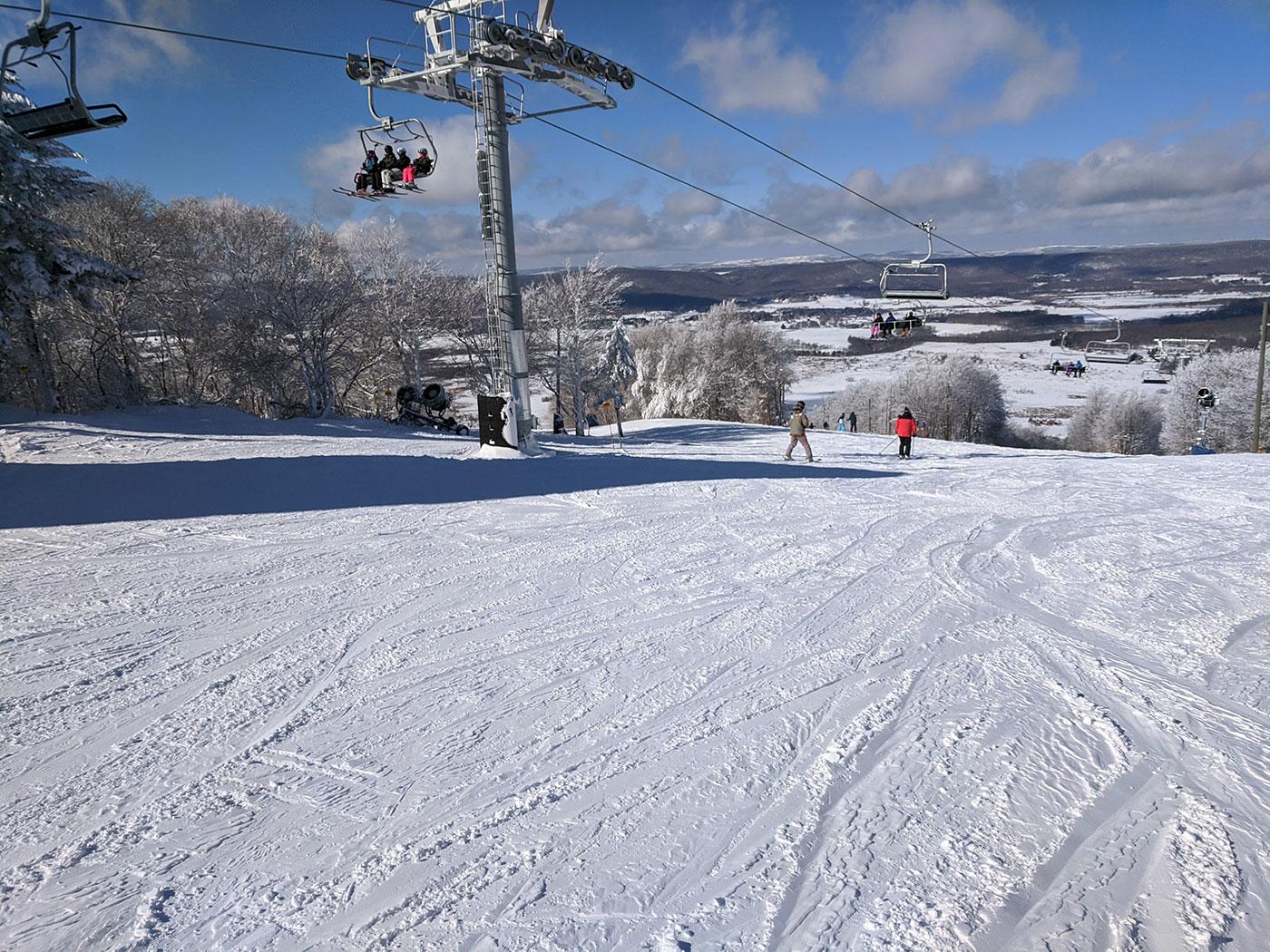 A revitalized Timberline is boosting the fortunes of businesses throughout the Canaan Valley region.

This transformation is accelerating now because of the pandemic and the trend towards remote work. I met several families at the resort who spent the entire season there homeschooling their kids, working remotely, and getting some turns in every day. What could be better? Already, we have seen tremendous increases in property values and very low inventories. Many owners, myself included, have no intention of selling regardless of price. The skiing, hiking, bird watching, and biking are just too good — nothing within a three hour drive of the DC region comes close.

Let’s hope growth remains smart and well managed. With Perfect North at the helm, I believe we are in good hands.

I did two day trips to Timberline from Massanutten, one in January a couple days after a snowstorm and another in mid-February when it was 100% open.  The new lift to the top is certainly a game changer, especially midweek when there wasn't really much of a wait even with only a few people riding each chair due to pandemic safety rules.

There was still more to do to finish up the lodge renovations.  Given the spacing of the tables in the expanded dining area, I was comfortable eating a quick lunch indoors.  The food options were better than I expected and the prices were reasonable.

Having RFID installed makes a big difference in the approaches possible for ticket prices.  Given the drive time from Massanutten, it was nice to easily get a $10 credit for only skiing 4 hours.  Could use RFID credit for food, which meant an ice cream treat before hitting the road.  Since the second day was also midweek, I got a $15 discount off that lift ticket. 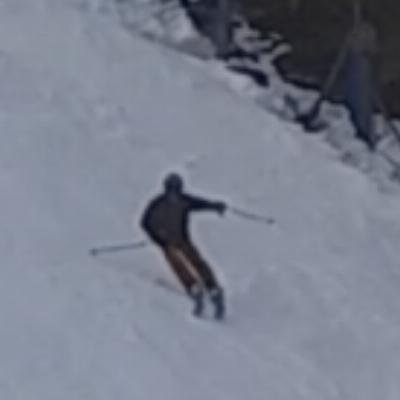 wgo
one month ago
Member since 02/10/2004 🔗
1,360 posts
Great article! Made it out to TL with my son for a couple day trips this past season. For next season the whole family will be season passholders and we are planning on several long weekends.

kwillg6
one month ago
Member since 01/18/2005 🔗
2,031 posts
John, you hit the bulls eye!   As I watched a couple of semi trucks being unloaded today with new snow making pipe, I was wondering what will be first?  I know they plan on rearranging some of the base area and improving the curb appeal.  They purchased the horse arena/farm across the street from them and all the winter equipment (new groomers, etc...) are stored in there. The staff, after being given the month of April time off, has returned and activity on the hill is amping up.  That never occurred under the Herz/Reichle ownership.  Hopefully the Slippery Slope will reopen on Memorial Day and we will have another very good dining option in the valley.  The revival of the valley was due mainly to Perfect North's investment and vision for the area.  I have a house I live in only 1/4 of a mile walk to the hill.  I have a condo that's an even shorter walk to the snow.  We've suffered through many years of uncertainty as have many homeowners.  We can look ahead to better times now.  Thanks to Perfect North and their knowledgeable and hard working group , we can have a positive  outlook.