In this two part series, John Sherwood reviews his experiences as an Epic Pass holder this past ski season — one of the worst snow years on record in the United States. In light of the subpar conditions and the bad press Vail Resorts recently received, John considers the value of the pass. Did it offer an “experience of a lifetime,” to quote Vail’s corporate mission statement, or something else? In Part 1, John discusses his visit to Heavenly Lake Tahoe resort in late January/early February 2022. In Part 2, John focuses on his early March trip to Stowe.

Locally, I rarely ski at Vail-owned resorts such as Whitetail, Liberty, and Roundtop. I mainly ski Timberline Mountain, where I own a property. I paid $376 for a Timberline season pass last season and skied most weekends and some weekdays from late November through mid-March. I got a lot of mileage out of that pass. Timberline made snow at nearly every opportunity, maintaining excellent terrain coverage for the entire season. Its high-speed, 6-pack lift allowed me to get over 25,000 feet of vertical on most ski days. The resort vibe and staff were amazing, and the icing on the cake was a powder day or two. Why would I ever go anywhere else?

As much as I love Timberline, I like to make at least one trip out West and sometimes a second trip to New England for a bigger mountain experience. The break-even point for an $841 dollar full Epic Pass last season was 6 days at a destination resort such as Vail, Park City, or Beaver Creek. The pass offered free skiing and a 20% discount on food and rentals. Consequently, I believed it would pay off for me. 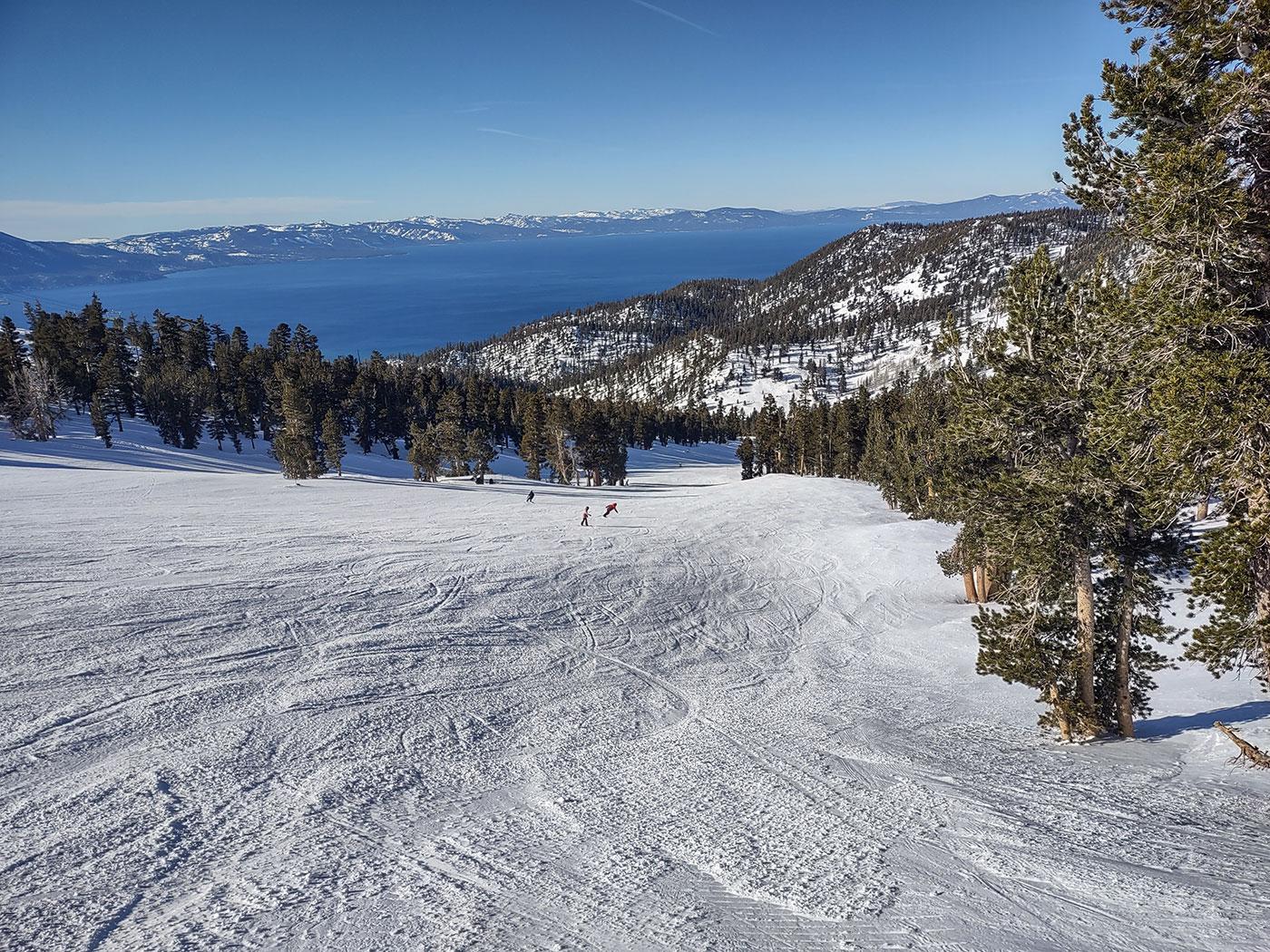 The fact that the Epic Pass was valid at several affiliate resorts I hoped to ski — namely Telluride and Snowbasin — and offered destinations in every major ski region in the country sweetened the deal. This latter perk would allow me to travel where conditions and snow were best — or so I hoped. What I had not anticipated was the avalanche of bad press Vail Resorts would receive this season about poor service, traffic and parking problems, and excessive crowds. A historically poor snow year in the West compounded these problems. Did I make an “epic” mistake in purchasing these passes and will I purchase an Epic Pass for next season?

When I started looking at places to visit out West in late January, Utah and Colorado had way below average snow bases. Only the Tahoe resorts boasted an ample base due to a record storm that dumped 193 inches of snow in much of the region in late December. With a single refresher storm, I reasoned, these resorts would be perfect. Alas, that snow never arrived but the trip did prove better than the negative press might have implied.

Heavenly Lake Tahoe Resort is a Vail-owned resort that sits on the southern end of Lake Tahoe. With 4,800 skiable acres, it’s one of the largest ski resorts that ring Lake Tahoe and arguably one of the jewels in Vail’s corporate crown. Many of its north-facing slopes directly face the lake, giving it the best lake views of any Tahoe resort and some of the best skiing scenery in the world. Having never skied in the Tahoe region, I chose Heavenly mainly for its dramatic views as well as its variety of blue and single black terrain. Heavenly did not disappoint in either regard. 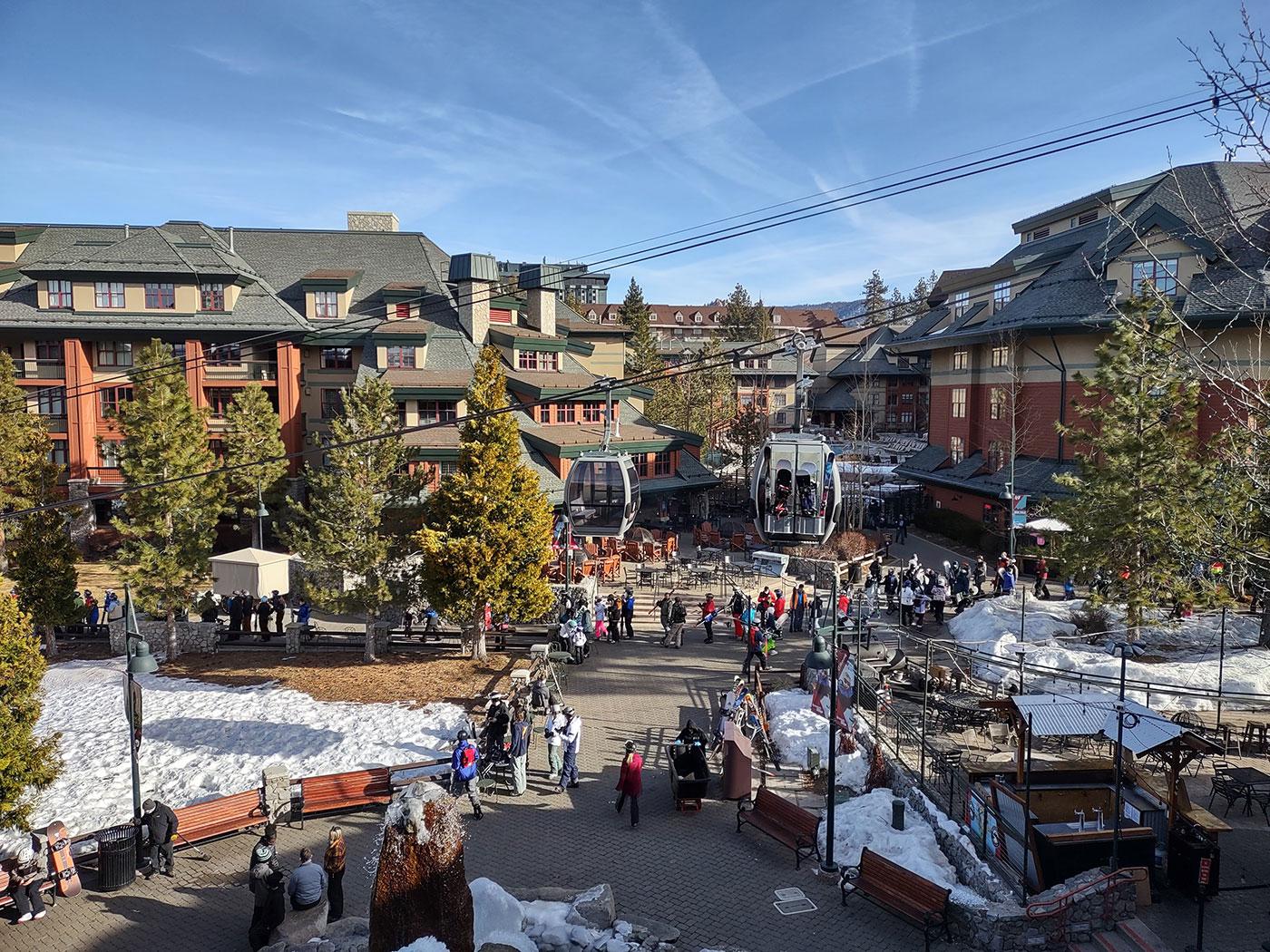 Base village at Heavenly. Photo by John Sherwood.

We flew United Airlines from Dulles via Denver to Reno, and took a ground transfer to South Lake Tahoe. At Heavenly, a car is unnecessary. Many accommodations are within an easy walk or shuttle ride to the two main access lifts: the gondola in Heavenly Village and the Gunbarrel Express quad at the California base area.

We stayed in a one bedroom condo at the Marriott Grand Residence Club in Heavenly Village — a superb property just a few steps from the gondola and near everything one needs as a skier (restaurants, ski shops, and a large grocery store). Compared to similar base village condos in places like Beaver Creek and Stowe, it was surprisingly affordable. Large casinos just over the border from South Lake Tahoe in Stateline, Nevada, keep the overall cost of accommodations at Heavenly low compared to comparable resorts elsewhere. I call this the Las Vegas effect: gambling subsidizes the cost of accommodation. 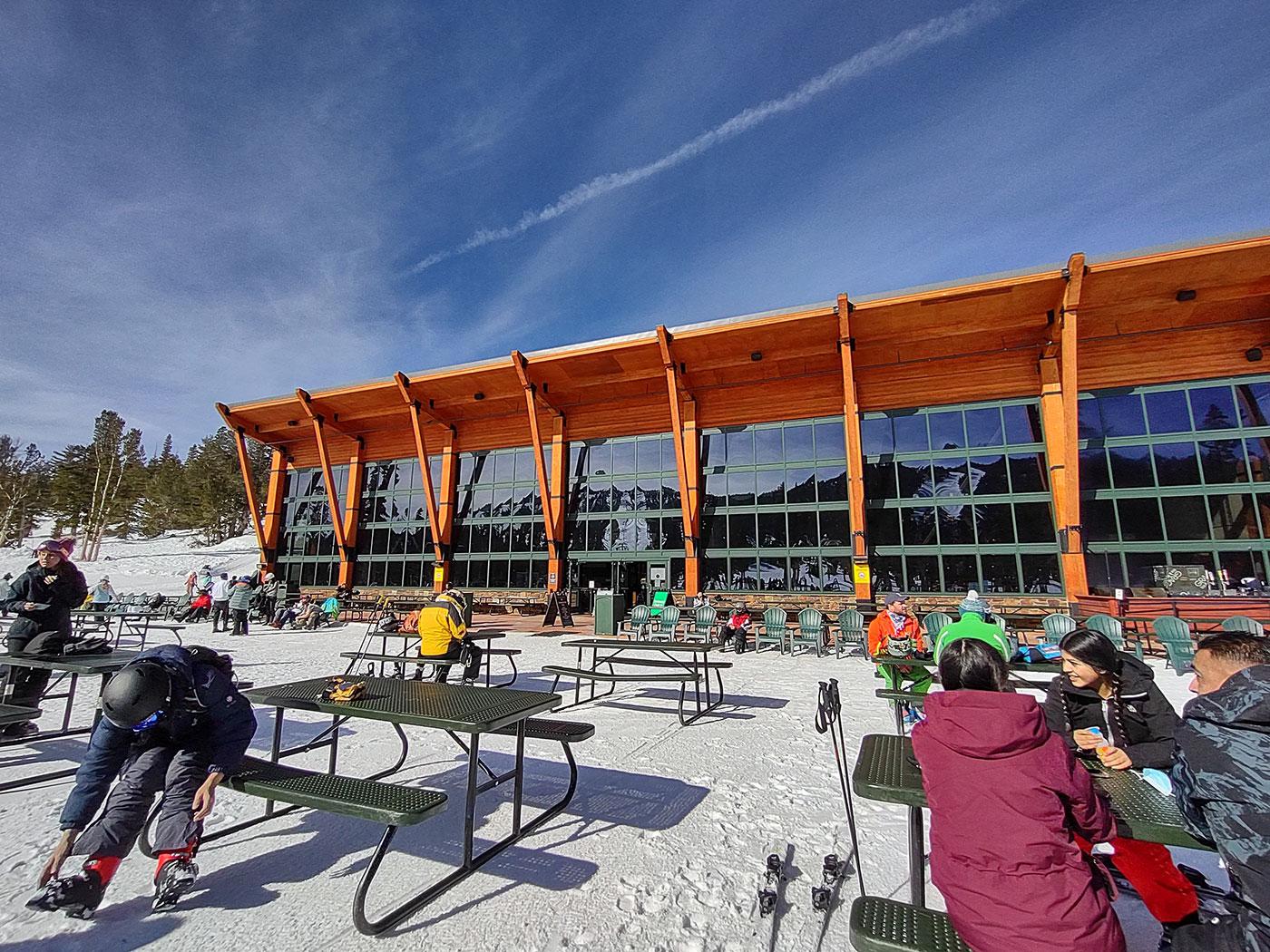 On our first day skiing, a Monday, my initial impressions were quite positive. Despite the fact that the resort had not received any fresh snow for over a month, the surfaces on the groomed trails were excellent and there was ample base everywhere on the mountain.

As things softened during the day, we were able to ski moguls and some other ungroomed areas but we shied away from the double blacks. The stunning views of the cobalt blue lake were mind-blowing. Every skier needs to experience those views at least once in their skiing career. On many trails, especially on the California side, you felt like you were literally skiing right to the shoreline. I stopped frequently to take pictures and gawk. 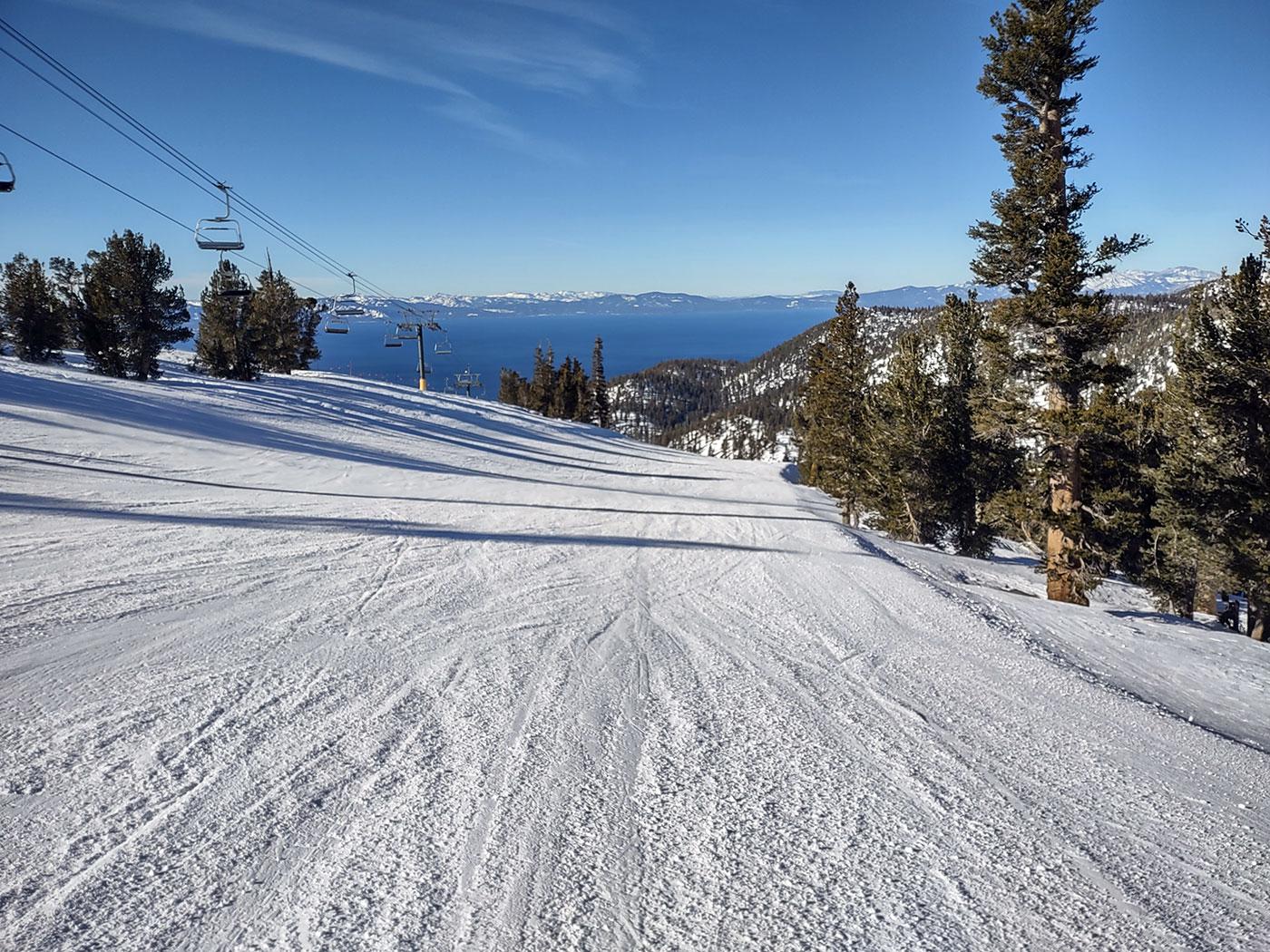 While Heavenly may offer stunning views, it’s far from being the perfect ski resort. Many of its signature ski lifts such as Comet, Olympic, and Tamarack express chairs rise less than 1,000 vertical feet and no lifts besides the Gondola, Gunbarrel, and the Tram rise more than 1,500. Much of blue terrain is low angle compared to blues I have skied at other resorts in the West.

After skiing big vertical at Sun Valley last season, the relatively short trails served by these lifts at Heavenly left us pining for longer, steeper runs. We found that by taking the Stagecoach and Olympic chairs, we could get 2,000 feet of vertical by skiing the Olympic Downhill run top to bottom. At 5.5 miles, it’s the longest run at the resort and a fabulous blue square cruiser with fairly consistent, medium-grade pitch.

Another place we found some vertical were on the trails served by the Canyon and Sky express chairs on the California side of the resort. These trails — Ridge in particular — offer some of the best lake views at the resort. Canyonland is a huge trail with some nice clumps of towering pine trees. I enjoyed playing in the moguls on Double Down, a single black. For much of the trip, I rented Blizzard Brahma 88s — the same ski I use at Timberline — and one well-suited for the machine-groomed conditions we experienced at Heavenly.

Wherever mountains meet water, there will be high wind conditions. Heavenly certainly is not immune to this phenomenon. On several days, we experienced 50 mile-per-hour wind gusts that shut down lifts.

On SkiTalk, I had read that Heavenly regularly closes its gondola on windy days, compelling visitors staying at Heavenly Village to shuttle over to the California side to access the mountain. This happened on two out of the five days we skied Heavenly. Both days would test Heavenly’s customer service. On Tuesday, we waited 30 minutes in our condo, hoping the gondola would open. When it didn’t, we sauntered out the door and were directed to the shuttle stop one block from the gondola station.

On that day, the line extended nearly to the gondola but it ran quickly. On wind hold mornings, Heavenly runs numerous full-sized coaches as well as smaller shuttle buses to get people to the Gunbarrel Express. 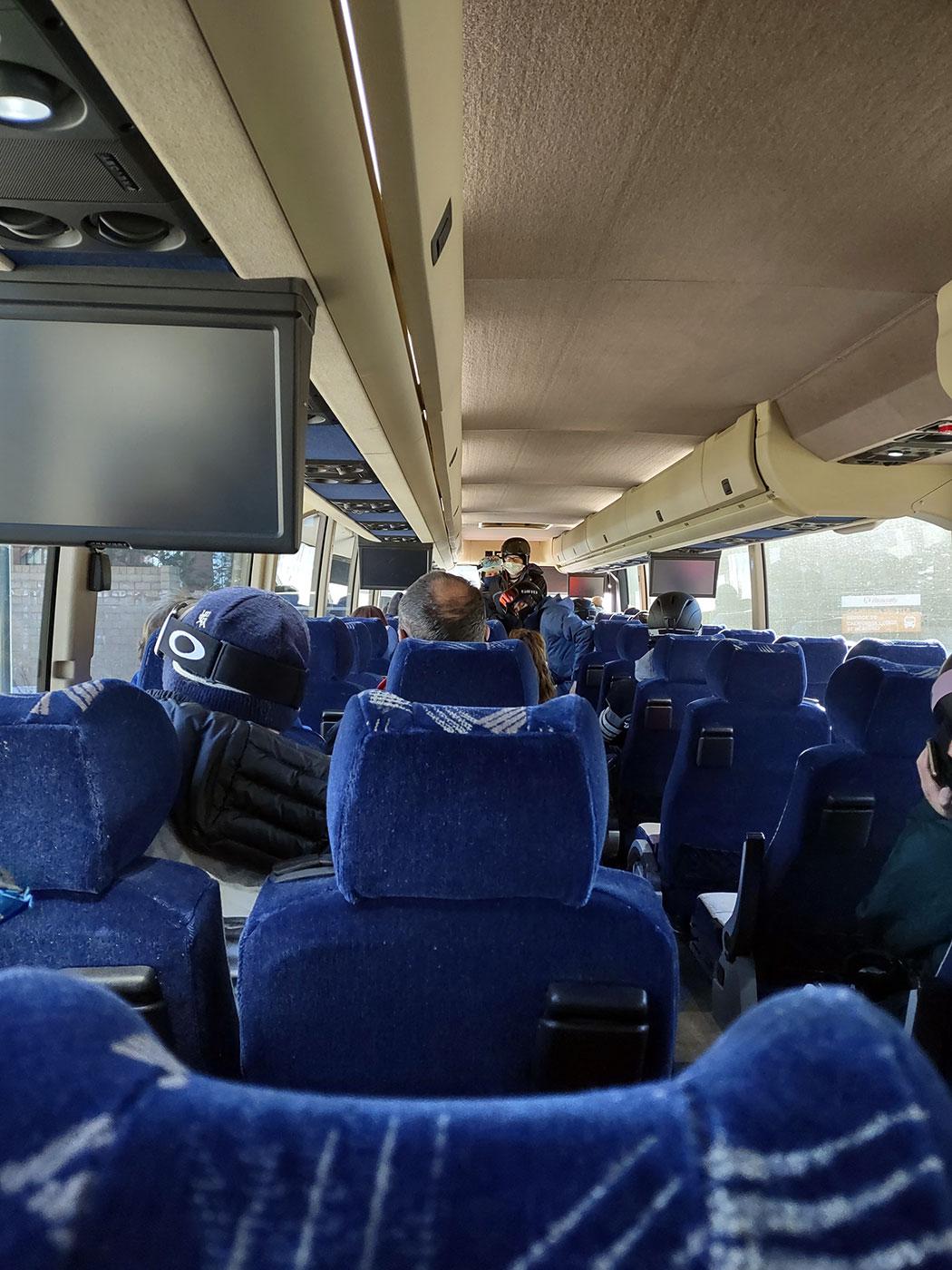 Shuttle transportation on a windy day. Photo by John Sherwood.

The whole process took about an hour the first day and 15 minutes the second day (due in part to our decision to catch the shuttle earlier and reluctance of many people to ski that day). The line was well-organized and a staff member kept us entertained by telling us about the resort, and other Vail resorts she had recently skied. She also advised us to stay on the California side unless the gondola reopened because no shuttles would be available at the Nevada base known as Stagecoach.

Wind made for colder skiing but we still enjoyed the bluebird skies and empty slopes. As one skier remarked on the lift, “there’s no such thing as bad weather, only bad clothing.” In general, we did not experience significant lift lines on any of the midweek days we skied but were told that Saturdays and Sundays could be crowded. That’s when many weekend skiers from San Francisco and Sacramento flock to the mountain.

While I appreciated the efficiency of the Heavenly shuttle system and found the staff at the resort to be friendly and helpful, all was not perfect during this second COVID season.

Food choices were extremely limited and not appetizing. Think overly battered chicken tenders lounging under a heat lamp and you get the idea. At the East Peak lodge, we were surprised that they had just one hot entree available on the day we ate there — quick-baked, previously frozen pizza. There were few vegetarian entrees besides cold, packaged salads, and nothing remotely ethnic (no Asian or Mexican choices). Good food should definitely be part of the “experience of a lifetime” Vail is trying to sell, and Heavenly failed in this category.

Overall, I would return to Heavenly. In addition to its splendid views and many fast lifts, the resort offers lots of fun cruisers and some expert terrain I would love to sample in better conditions. The groomers did an amazing job each day making old snow skiable, and the sunny Tahoe weather definitely was a plus.

Lastly, I enjoyed the conveniences of Heavenly Village and the financial, environmental, and mental benefits of being carless for a week. As for the Epic Pass, you will need to read Part 2 on Stowe to learn my thoughts on that issue. For this trip, however, Heavenly delivered a solid ski experience at a good value. 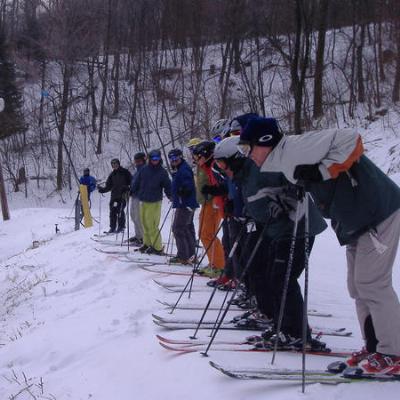 Good summary of the pros and cons of Heavenly, John.

Not my top choice out west, but great views and convenient. Worth going at least once. Plus Mott and Killebrew Canyons have legit steeps if the conditions are right.

JohnL
one month ago
Member since 01/6/2000 🔗
3,537 posts
Also, I’ll need to share some pix of Lake Pend D’Oreille above Schweitzer with ya. Not as blue as the incredible blue Lake Tahoe, but IMHO, more spectacular. If ya can believe it.

oldensign - DCSki Columnist
one month ago
Member since 02/27/2007 🔗
456 posts
Big fan of Tahoe. The other two Vail resorts Northstar and Kirkland are worth a look as well.

IKON pass is changing too, with so many tweaks/upgrades/fine print/reservations/etc.  While some resorts remain unlimited and on base IKON, many are making it more difficult for the unwashed masses and require premium/upgrade rates.  Some also have lift and parking reservation requirements.  I guess all this is the law of supply and demand working itself out :-)

Mongo
one month ago
Member since 02/24/2015 🔗
66 posts
People who go out West in December/January - how far ahead do you book flights and lodging?

johnfmh - DCSki Columnist
one month ago
Member since 07/18/2001 🔗
1,959 posts
2 weeks in advance. I am more worried about conditions than paying a bit extra for flights and lodging. I often use airline  reward miles or vouchers, which don’t tend to vary that much between 14-day bookings and one further out.