At Christmastime, cold artic air crashed across the country, resulting in temperatures plunging to subzero levels with even colder wind chills. This was great for snowmaking but bad for running an airline. Plunging temperatures crippled Denver international Airport and one airline more than others: Southwest. Crashing temperatures combined with labor issues and outdated software led to mass flight cancellations. At one point, more than 75 percent of Southwest’s flights were canceled.

What does this have to do with skiing? Well, three people in my family were scheduled to fly either to or via Denver the day after Christmas. All of their flights were cancelled with no hope of being rescheduled until after the New Year. Therefore, I did what any reasonable person would do: I threw them into the car, placed my skis on top, and headed west! It took 24 hours, but 1,724 miles later, I found myself with an unexpected ski trip!

The next question was where to go? I have an Epic pass and my son, who was staying a few extra days in Colorado, has Ikon. Unfortunately, it was a holiday week so the thought of the big Epic or Ikon resorts bought visions of lift lines more than powder runs. Thus, I settled on independent Powderhorn Mountain Resort, located in Mesa, Colorado. Powderhorn is Colorado’s western-most ski resort. Ironically, it is a mere 20 miles off I-70, but a four-hour plus drive from Denver. That seemed far enough away to keep the holiday crowds at bay. 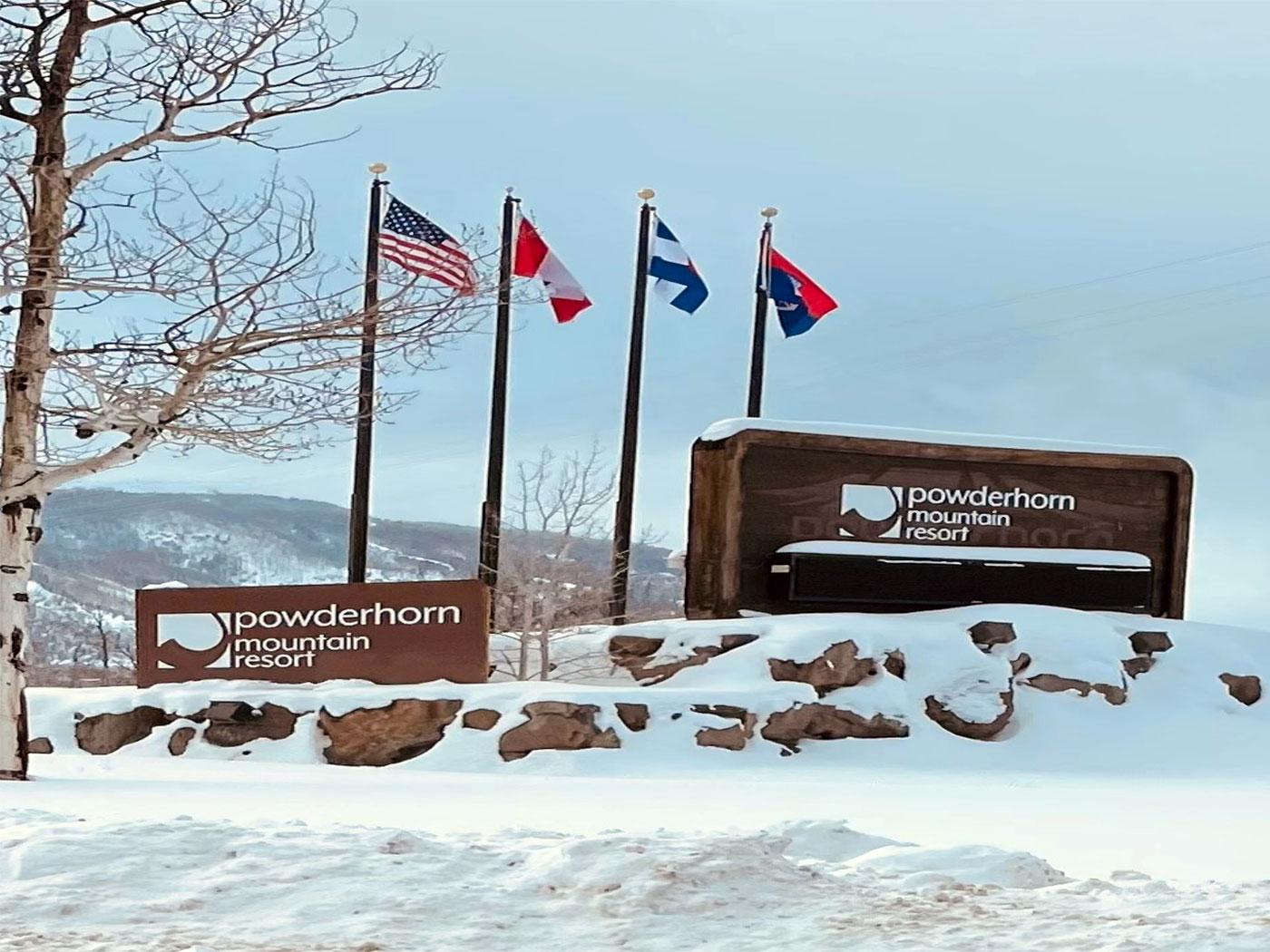 Just 45 minutes east of Grand Junction, Powderhorn sits on the northern rim of the world’s largest flat-topped mountain or mesa. It is a unique location where the desert meets the mountains. The surrounding scenery is more red rock than alpine fir. Powerhorn is on the “dry” side of Colorado, west of the Continental Divide, but still receives over 250 inches of annual snowfall. Being on the “dry” side also means that the snow is mostly light, airy powder.

The resort boasts 54 trails off two major lifts. The high speed Flat Top Express climbs from the base to the summit, providing a solid 1,600 feet of vertical. A fixed double serves the expert terrain on the “West End.” The day we skied, most of the 54 trails were open and recent storms had left excellent coverage. The front side off the high speed was excellent: a combination of wide blue and black trails, all flowing back to the quad. Even during the holiday period, we never waited more than a few minutes. 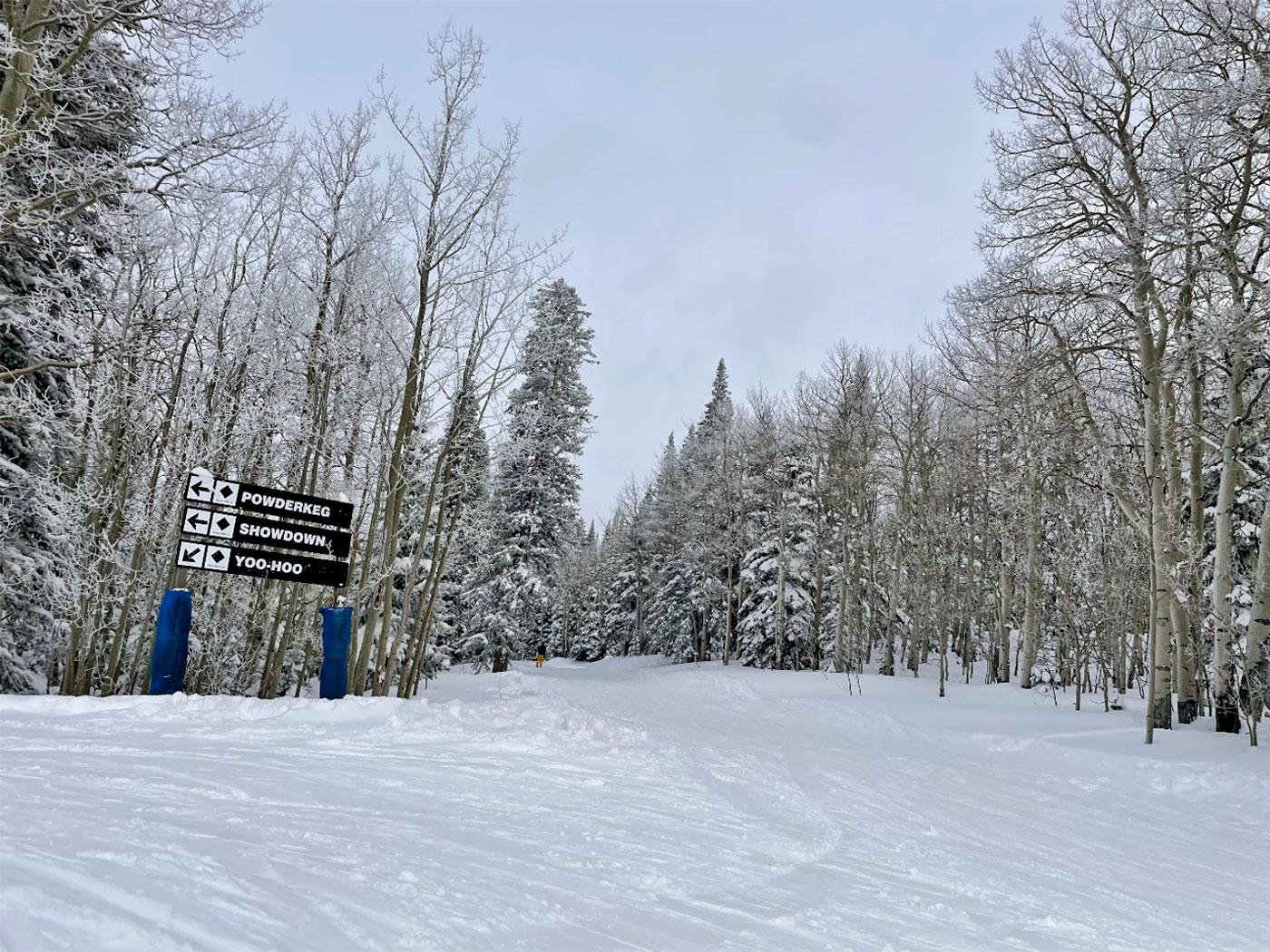 Lots of powder at Powderhorn. Photo by Spencer Allen.

The West End fixed lift was more a challenge. Lines formed with every stoppage. Even though the chair accesses some of the best terrain on the hill, the top of the hill is quite flat (it is a mesa after all). The trail right off the lift is a long, flat catwalk. As a recent convert to the dark side of snowboarding, I was forced to unclip and slide, then re-clip and slide a few times before reaching the fall line. After suffering through this for a few runs, we stuck to the high speed for the most of the day. 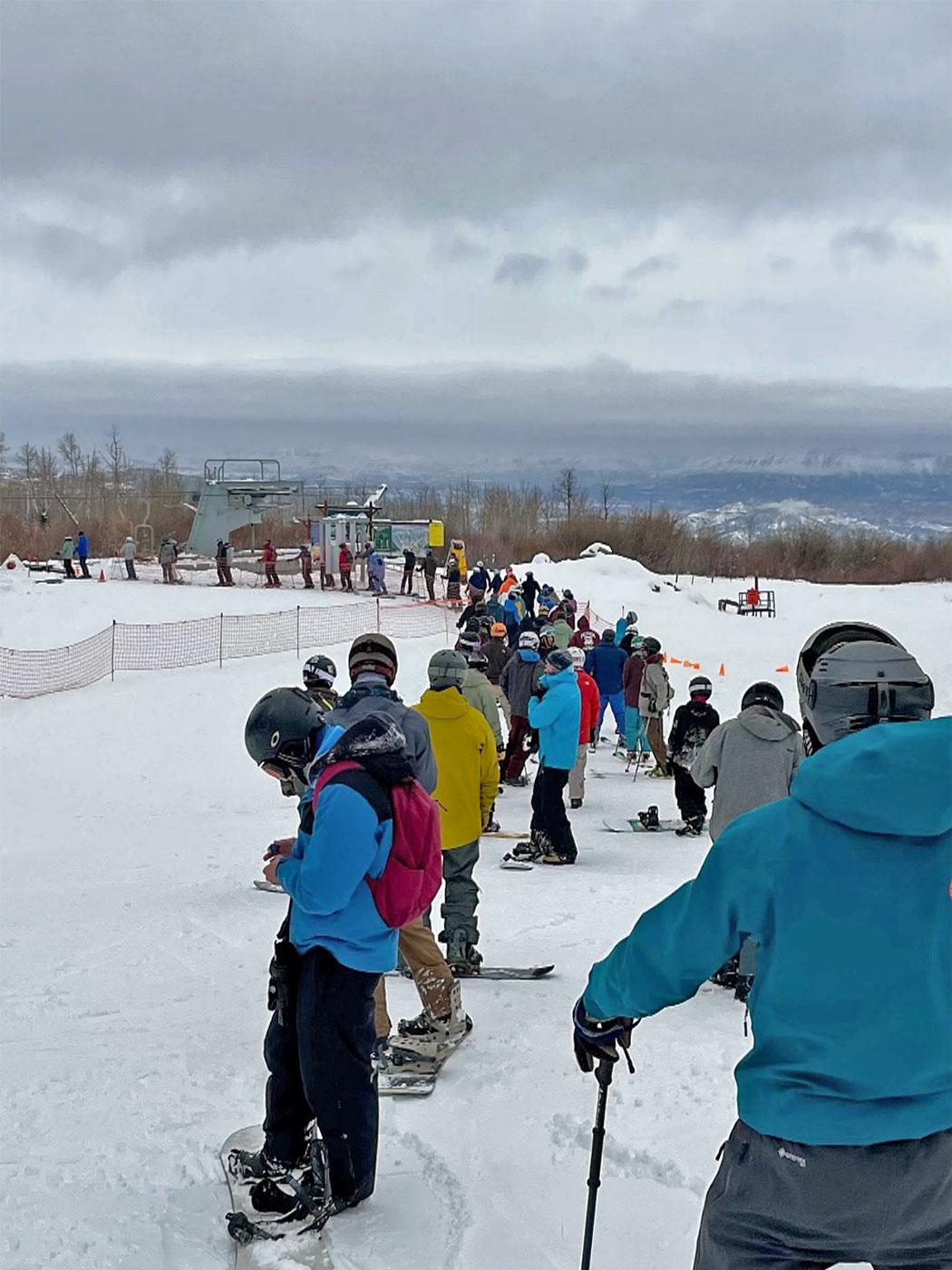 The West End double brought the only lines of the day. Photo by Spencer Allen.

Powderhorn has a small lodge area, which was busy with the holiday crowds. The parking lots were full, but free! There was never much of a line at the front side high-speed lift the whole day we skied. I paid a mere $90 each for our lift tickets, which was quite the deal, compared to the big boys up the road. 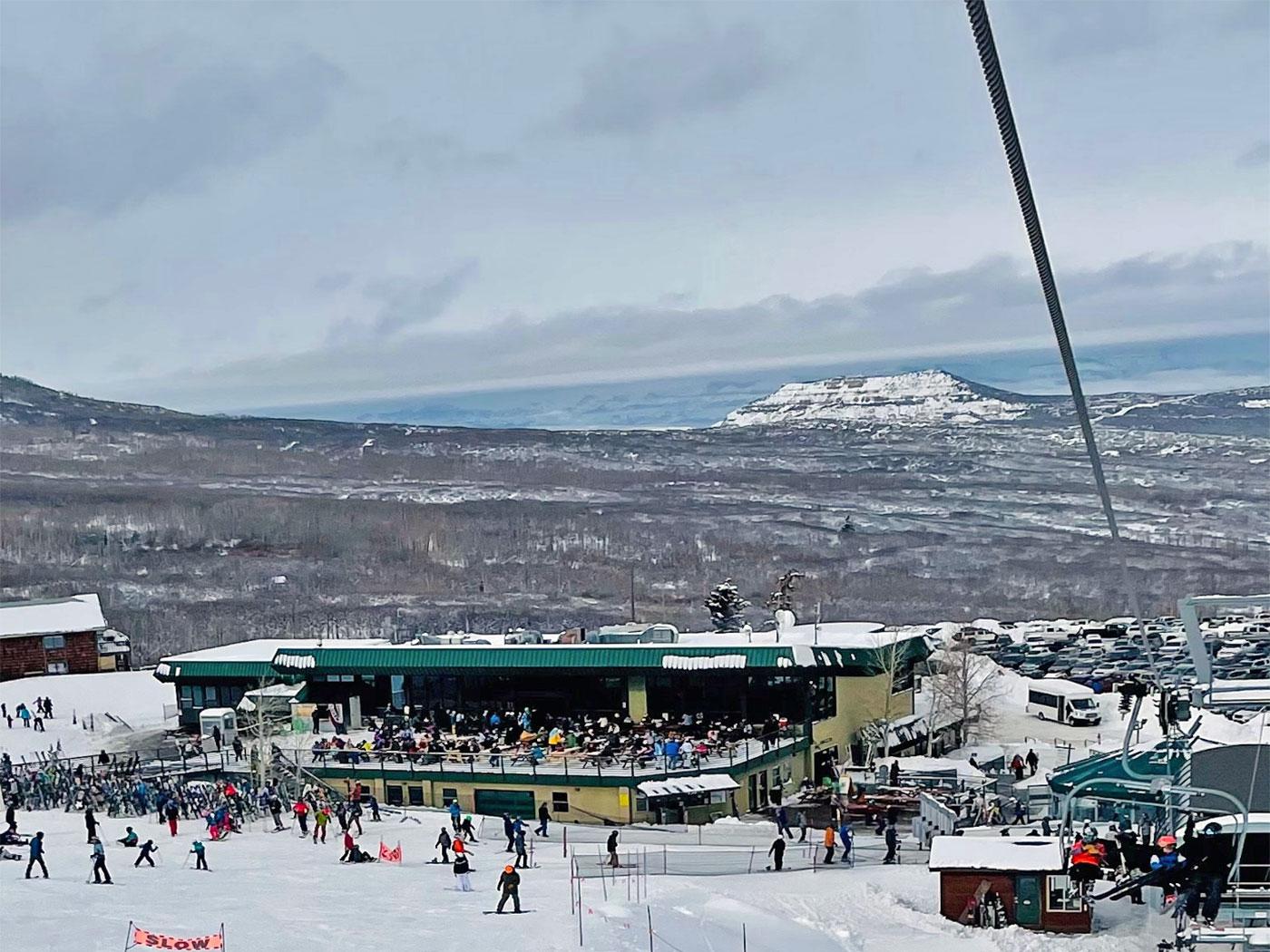 However, the highlight of the base area is the Umbrella Bar. On blue bird days, the roof retracts to let in all the sunshine. Pretty cool. 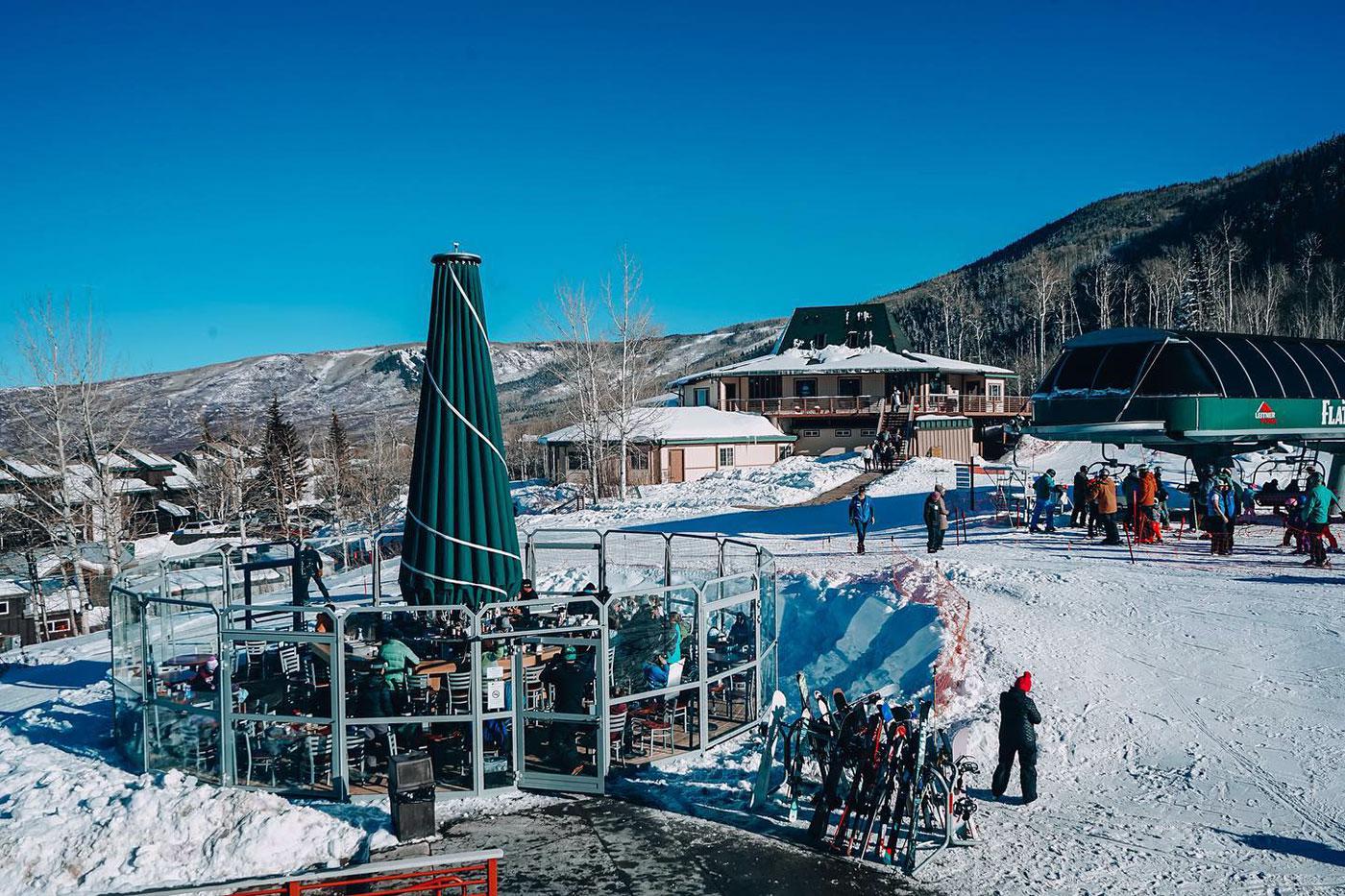 The Umbrella Bar in action. Photo provided by Powderhorn Resort.

Aside from a small hotel and some condominiums, one can rent a “tiny” house just step away from the slopes and a short slide from the Umbrella bar! 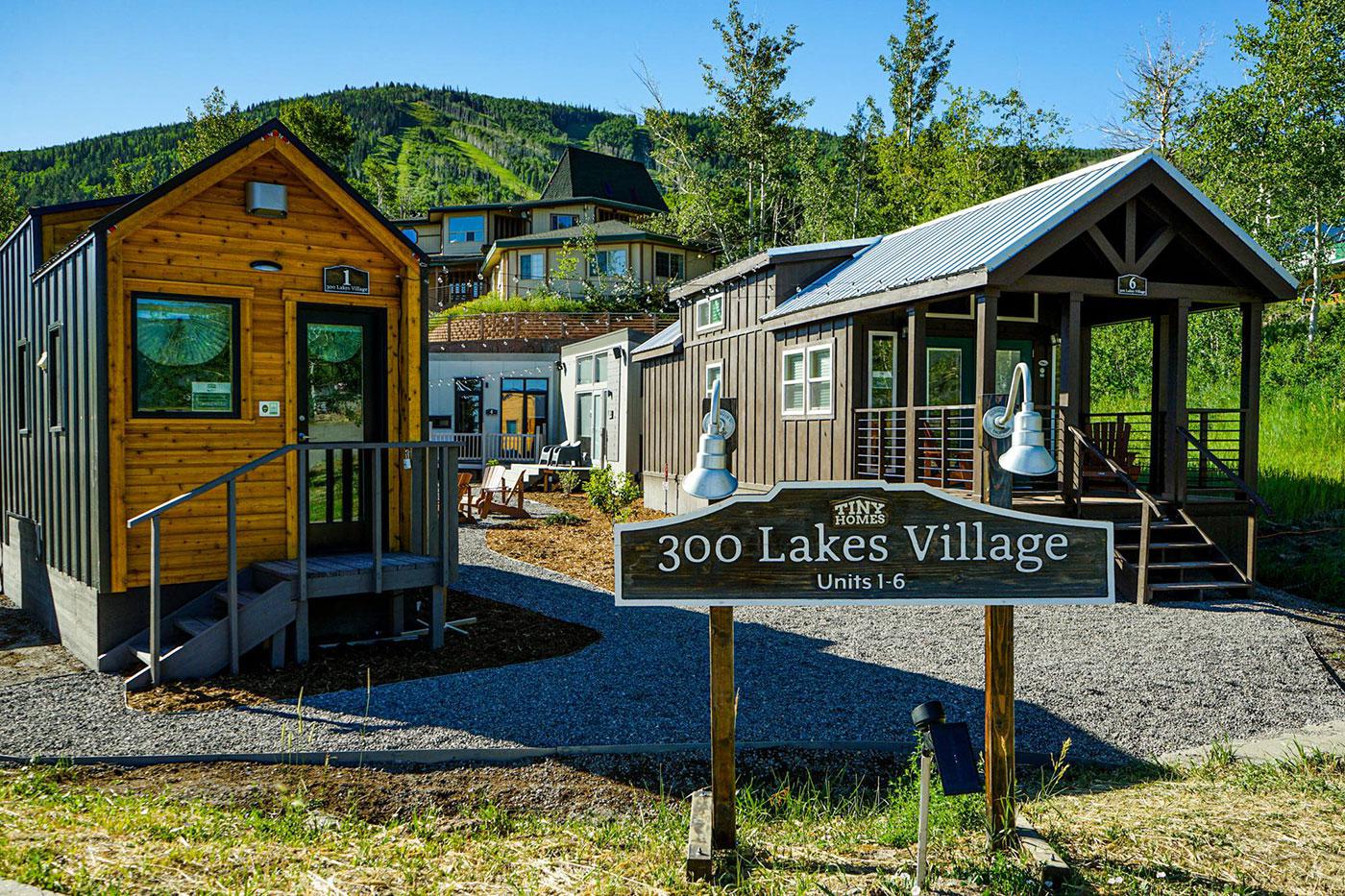 By now, most of the wayward passengers of Southwest Airlines have found their way to their destinations, but how many of them got an unexpected ski trip out of the inconvenience?

Overall Powderhorn is a nice break from the mega resorts. It’s a place that tries to be different with the tiny houses and Umbrella bar, but still comes through with some great terrain and a family vibe at a low price. A Colorado gem for sure, just do not tell those folks four hours east! 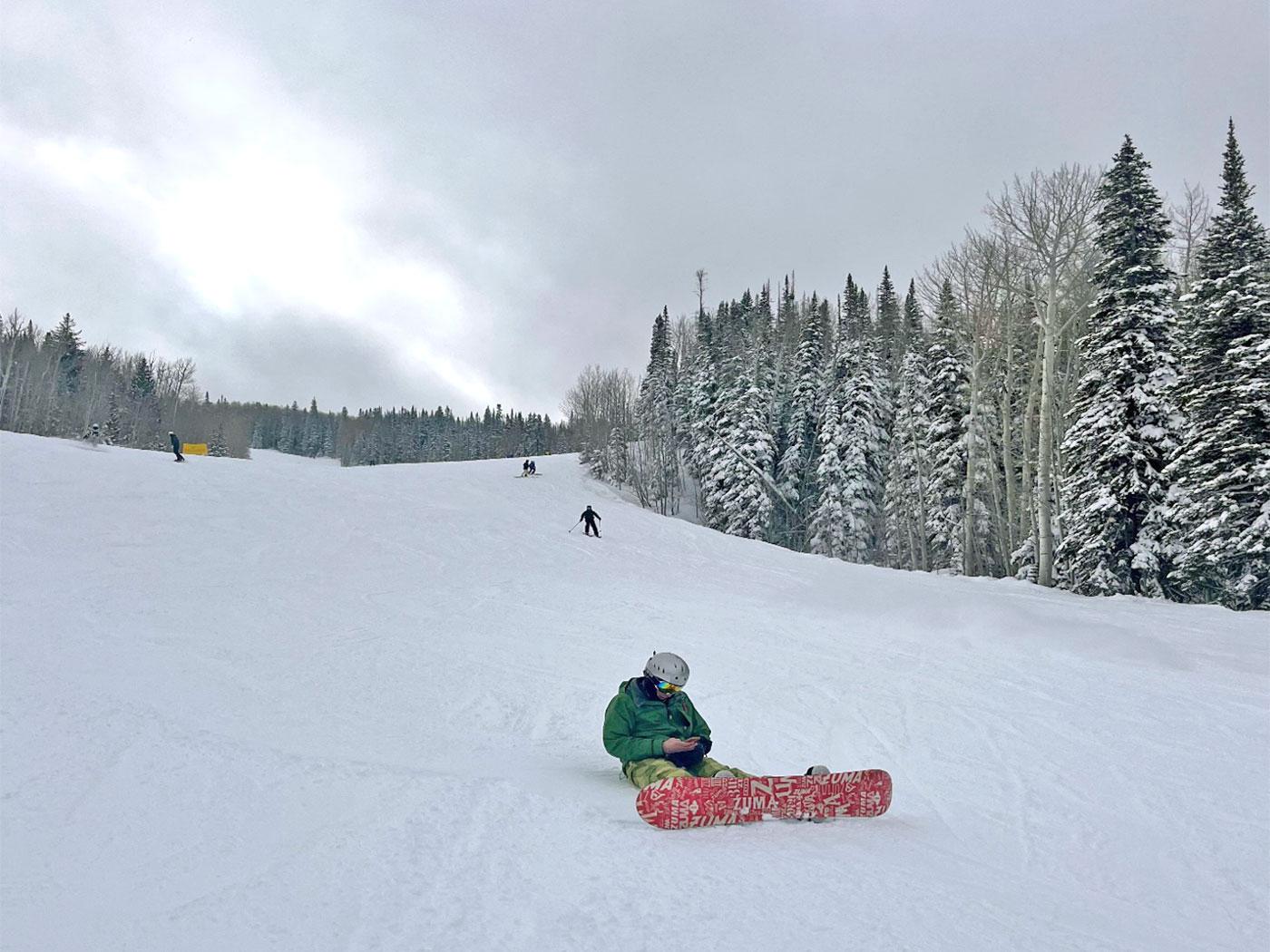 The author doing what snowboarders do! Photo by Spencer Allen.

I'm in awe of your dedication to the road less traveled and passion for small local ski areas!  I gotta confess I would have stuck to Breck or Copper and stayed closer to Denver.

In the last five years I've driven on the section of I70 between Grand Junction and Glenwood Springs about ten times, both in winter and summer, usually on the way to Aspen or Denver from SLC.  I've never made the diversion off to Powderhorn, but I've been tempted.   The scenery in your photos looks a little like the Steamboat area.

In late May 2021 my wife and I took a nice drive through nearby Colorado National Monument to enjoy some of that "red rocks" scenery: 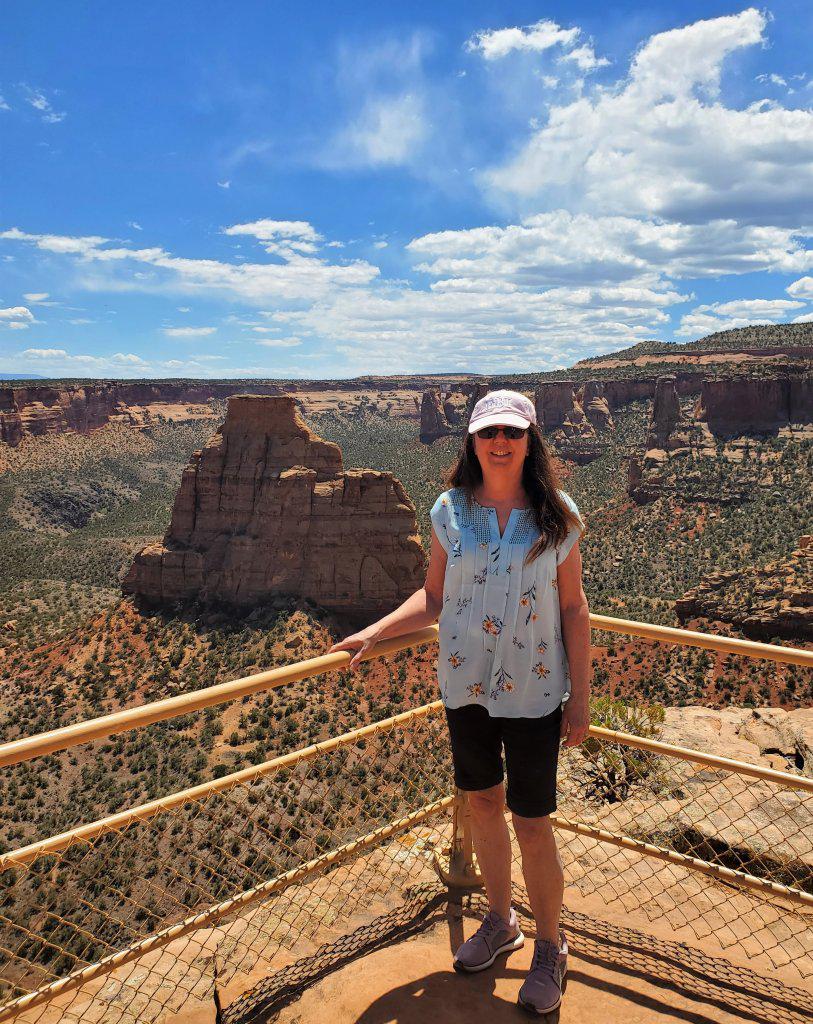 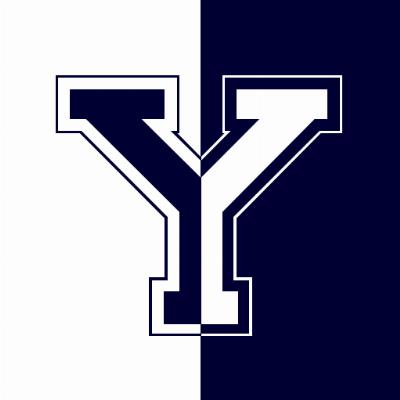