From an email I received today (as I bike there):

Unfortunately we have to make a tough decision and CLOSE the park for the season after tomorrow, Monday, Nov. 22. We are fortunate to have good conditions for snowmaking right now and we need to take full advantage in preparation for the ski season. Thanks to all who came out and rode with us this year. We’ll see you next spring!

It looks like Massanutten and Bryce are cranking out the snow this morning!

It looks like Wintergreen has at least tested their equipment lately, but not exactly sending it this morning at 22 degrees...

When are the Epic resorts going to keep up (Liberty, Whitetail, Roundtop)???  Roundtop has weather in the 20s 7 of the next 8 nights!  I hope they don't pass up this opportunity.

Bryce is a little too tame for me unless I'm bringing someone skiing for their first time (which it is perfect for), but I have to say they punch above their weight.  They aren't afraid to make snow early in the season and I recall this really put them ahead of the curve last year.  This past Summer they expanded the square footage of their rental shop, last year they rebuilt their cafeteria and boosted their bike carrying capacity by 50%, and in the last two years they've built three new bike trails (check out youtube videos of Hooch to see how insane what they built is), and on the snow side (I haven't seen it in person during the winter) made a new side area on the mountain for park skiing (not my cup of tea).  I don't recall seeing any lift to bring people back up but I recall the rail riders would often walk back up the hill at lift served resorts anyways.

I finally checked out Bryce a couple years ago using the Indy Pass.  Easy day trip from Massanutten.  In fact during late season, a friend met me at Bryce after getting the Spring Indy.  We skied for an hour or so, then headed to Mnut to ski there in the afternoon.  He got good value from his Indy pass that weekend.  I had an extra bed in the timeshare condo I had for a long weekend.

What I've heard is that Bryce is in a "cold" sink so can often make snow when it's too warm at Massanutten.  Massanutten also ends up with temperature inversions when it's several degrees warmer at the peak compared to the valley.  Bryce slopes opened in 1965, presumably with 100% snowmaking.  It was the inspiration for making the Kettle below the Massanutten peak into a ski hill in the early 1970s.

squeakywheels
10 months ago
Member since 08/4/2017 🔗
38 posts
Bryce actually made snow last Saturday night as well. Looks like they are trying to open this weekend if they can make enough snow Tuesday and Friday night.

Bryce is selling tickets for Saturday and Sunday, and then none are available again until Dec 24th.  Looking at the 10 day forecast, maybe they can extend it some more...

squeakywheels
10 months ago
Member since 08/4/2017 🔗
38 posts
Bryce opens to general public this Saturday. Friday is preview for resort members. 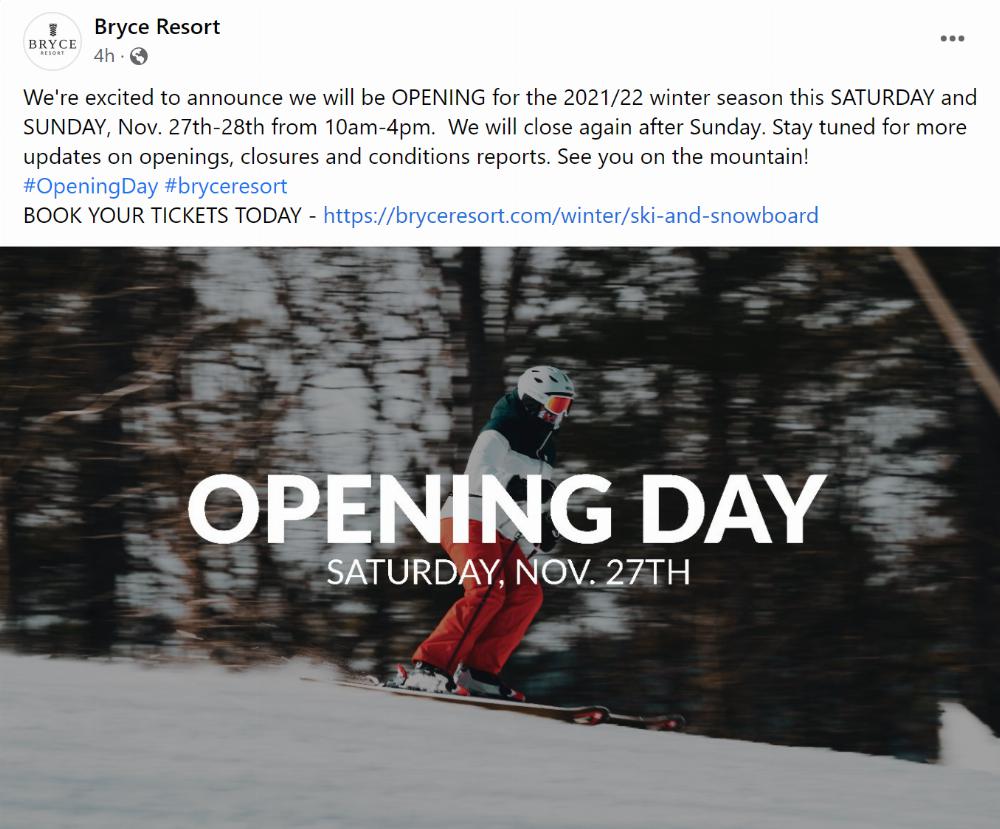 From what I could tell, Massanutten was dealing with a typical temperature inversion at least one of the days that Bryce could keep making snow during daytime hours.  Snowmaking at the Mnut base still on as of 9am on Sat morning.  Night time temps looking good for most of the next week.  My guess is that the hope is to get open by Dec. 3.  What will be fun to hear is how deep the coverage is where the new fan guns were installed.