My son Vince and I made a very rewarding visit to Hunter Mountain, NY in late March 2014. There is a lot more to Vince’s skiing than just accompanying me on the occasional trips I report about on DCSki. While I’m just a recreational goof-off, he’s been busy ski instructing at three different mid-Atlantic ski areas since 2010. Our visit to Hunter was all business for Vince as he tackled an intense two-day PSIA Level III skiing exam. I tagged along as his chauffeur and gofer, but took advantage of the two days to enjoy freeskiing at Hunter in good late spring conditions.

The Level III exam Vince signed up for at Hunter was an important step in his efforts to earn full certification at the highest levels of ski instruction in America. You wouldn’t believe the extent of on-snow skiing skills his group of instructors were required to perform for many hours both days before three very exacting examiners. It’s way beyond just being able to rip down the hill. Candidates must be able to meticulously break down every element of ski technique and demonstrate the turning, edging and timing needed to teach students at all skill levels from beginner to expert. 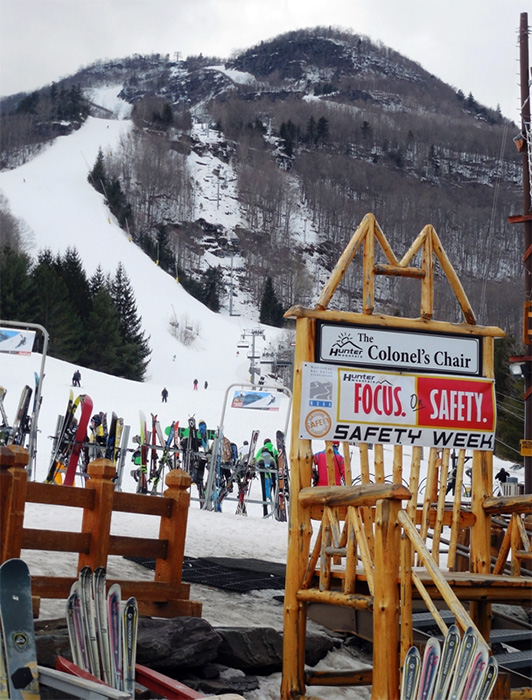 View of Hunter Mountain from the base area. Photo by Jim Kenney.

While Vince kept his 23-year old nose to the grindstone I frolicked on the slopes like a geezer on spring break. This was my third visit to Hunter over the years and perhaps my most enjoyable. Hunter Mountain has a 1,600-foot vertical drop and approximately 60 trails and is one of New York City’s go-to destinations for day trippers and weekenders. It has the reputation of a somewhat frenetic, high volume ski area reliant upon one of the greatest snowmaking systems in the world. But it’s also a strikingly distinctive place to ski, especially if you get to experience the glacier-thick manmade snowpack we enjoyed on two quiet weekdays.

While Vince made an early check-in for the first day of his PSIA exam I grabbed first chair of the morning on the Kaatskill Flyer (1,477’ vertical, 5,400’ length). It was one of the few times I rode the chair with a full complement of six passengers in our two days at Hunter. I did my best to ski every trail on the mountain in wonderfully uncrowded conditions. Hunter is basically a giant rock pile that was built and managed for many years by Orville and Izzy Slutzky, a legendary pair of Ukrainian-American brothers with a background in earth moving and heavy construction. In the late 1950’s they chiseled the trail layout from red sandstone with blood, sweat, and dynamite. Many of the runs flow like cliff-side parkways and provide terrific views of the surrounding Catskill Mountains.

Since Vince was tied up with his exam I befriended Bob from New Jersey and we skied together for about 90 minutes in the morning. Bob was 75 years young and a good, strong skier who’d been making tracks at Hunter since 1962. He had some rowdy tales from yesteryear and expressed especially fond memories of cofounder Izzy Slutsky. While younger brother Orville (1917-2013) kept Hunter’s books, Izzy (1914-2006) was the hands-on operations manager. Over the years Izzy was frequently seen skiing the hill while checking on lifts, conditions, and all aspects of mountain facilities. 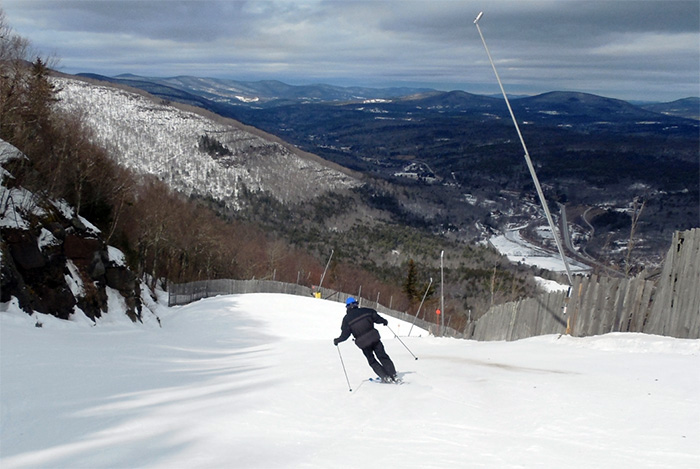 Friendly Bob on the Jimmie Heuga Express named after the late US Olympic Slalom Bronze Medalist and champion of adaptive skiing. Photo by Jim Kenney.

Bob showed me the beautiful Catskill Mountain views from the intermediate Jimmie Heuga Express Trail. Then he led me down nice spring snow on a quiet combination of White Way and Way Out to the base of Hunter West on the “backside” of the trail layout. Clair’s Way, a black diamond trail in the Hunter West trail pod was fast and firm, but well served by the Zephyr Express quad chair (~1,295’ vertical, 3,800’ length). After Bob left for his New Jersey home I skied the B Chair (490’ vertical, 2,650’ length) back on the front face of the mountain and had fun lapping a good mogul field near the top of it. 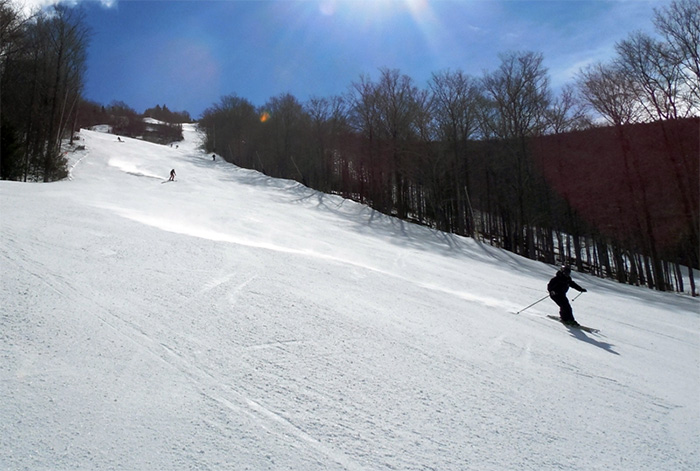 On our second morning at Hunter Mountain Vince continued his exam while I resumed skiing all over the mountain including more runs in Hunter West. Once I rode up the Zephyr Express with a pair of fast moving Russians from NYC and we talked briefly about Vladimir Putin’s fast moving in the Crimea that was grabbing headlines at the time. Even on weekdays Hunter has a very cosmopolitan/international clientele, which I presume is based on its proximity to The Big Apple (~2 hours from Manhattan). Vince’s exam ended at noon and I reunited with him for lunch. Results of the exam wouldn’t be announced for a couple of hours and Vince was on pins and needles, but two of his examiners greeted him quite warmly while we were in Hunter’s ginormous cafeteria. I thought that was a good sign, but didn’t say anything at the time because the pass rate for first timers on the Level III skiing exam is low. 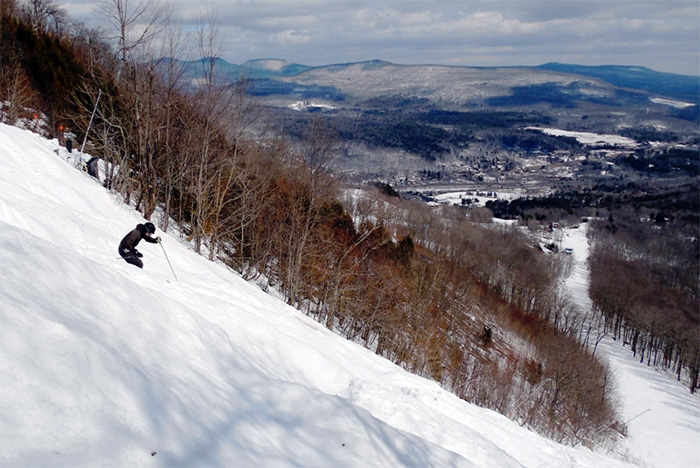 Vince and I skied together after lunch for about an hour including runs on K27 and Crossover. They featured steep black diamond bumps that had softened nicely in the spring sunshine. He was really on his game and carved through them like they were low angle novice trails. In mid-afternoon Vince went inside the lodge to get his test results. When he met me on the huge deck outside the lodge and told me he passed the exam he was literally jumping for joy. 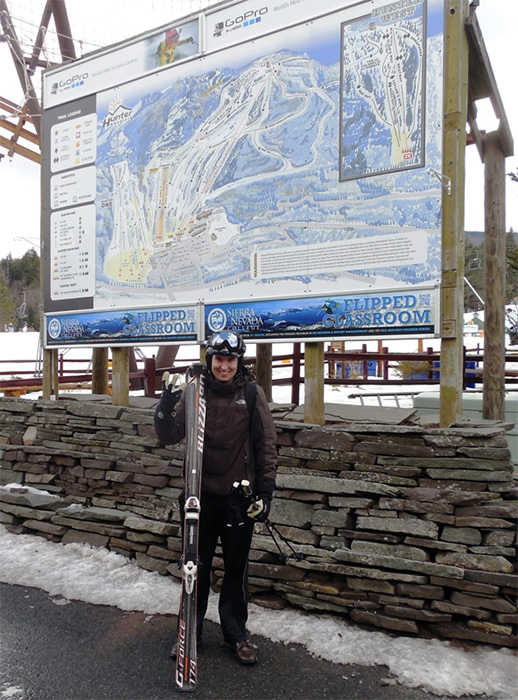 Vince will be instructing at Liberty Mountain, PA this season. He’s hoping to gain the necessary experience to attempt the Level III Teaching Exam in February or March 2015. This is no shoo-in exam either. It’s another two day event and the last assessment he needs to get the coveted gold pin that marks him as a fully certified Level III Professional Ski Instructor of America.