As the 2014-2015 ski season gets underway what are you thinking about for your long term trip plans? You like to ski locally, but might be enticed by a BIG mountain you could visit within a day’s drive that would still be going strong after all mid-Atlantic ski areas begin to shut down. I know of such a place where winter seems endless - Sugarloaf, Maine.

My son Vince and I made the 11-12 hour drive from the Washington D.C. area to Sugarloaf for two days of skiing in late March, 2014. Much of New England had received more than a foot of snow two days before our trip and it was full-on winter with excellent conditions when we arrived at Sugarloaf.

It was almost too wintry. The temperature barely cracked double digits during our visit and on the first day the Timberline Chair that serves Sugarloaf’s 4,237-foot summit was closed for wind-hold. But we met some friends including a few Maine locals from the online forums of EpicSki.com and they showed us a great bunch of runs on the middle and lower portions of the mountain. 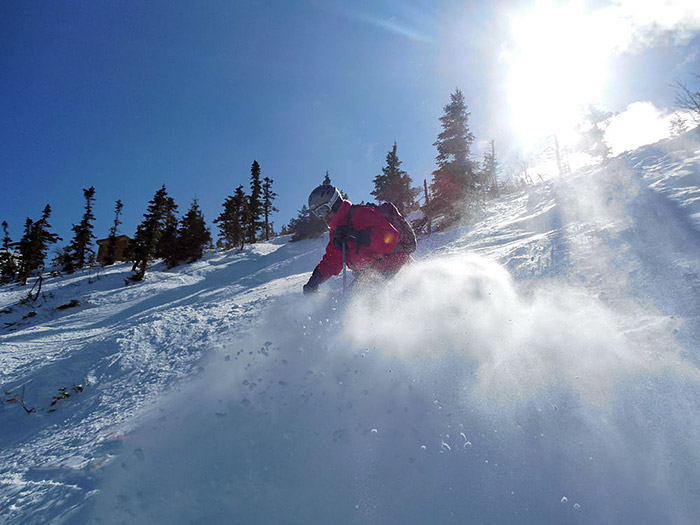 Powder hunting in the glades near Upper Bubblecuffer trail. Photo by Jim Kenney.

The focus of our first day of skiing was primarily on two chairlifts, the Sugarloaf Superquad (1,750’ vertical) and Skyline triple chair (1,454’ vertical). Between these two lifts we had access to about 85% of Sugarloaf’s massive front face. We skied soft bumps beside the Superquad (Upper Competition Hill trail and Sheer Boom trail). We also skied a nice group of groomers off Skyline chair and steep glades in between them near black diamond runs like Upper Bubblecuffer and Widowmaker. Later we took the Spillway Crosscut to a bumpy trail called Ripsaw that dog legged into Brackett Basin glades. Brackett Basin is huge, but comprises less than half of Sugarloaf’s 650 acres of sidecountry. 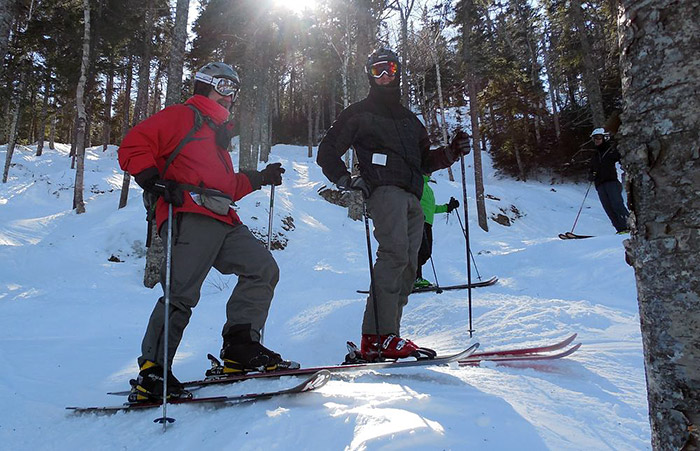 For the record, Sugarloaf is a seriously big mountain with the most inbounds skiable acreage in the East (1,056 acres), 15 lifts, and a very notable 2,820’ vertical drop from its single summit. We stayed overnight at the slopeside Sugarloaf Mountain Hotel. It’s very nicely appointed and that evening we really enjoyed the 30-person outdoor hot tub that overlooks the base area. We feasted on an excellent full breakfast buffet the next morning in the 45 North Restaurant adjacent to the hotel lobby. 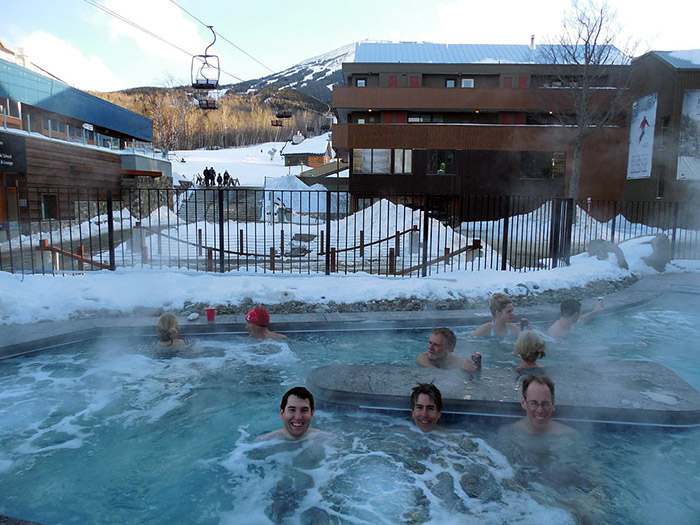 Our second day at Sugarloaf was a very quiet Monday. The entire layout was open and it was sort of like our own private Maine. The temps were still very cool, but that made the trail surfaces nice and chalky. Vince and I were joined by two very skilled ski buddies and the four of us had fun taking turns videotaping each other doing hero carving on deserted ski trails.

We saw a ton of wind-drifted snow while riding the Timberline Quad Chair (980’ vertical) to the summit of the mountain. I got a touch of frostbite on my cheek when I left it exposed on a fast groomer run and we took a warm-up break in Bullwinkle’s, a classic mid-mountain restaurant and gathering spot at Sugarloaf. 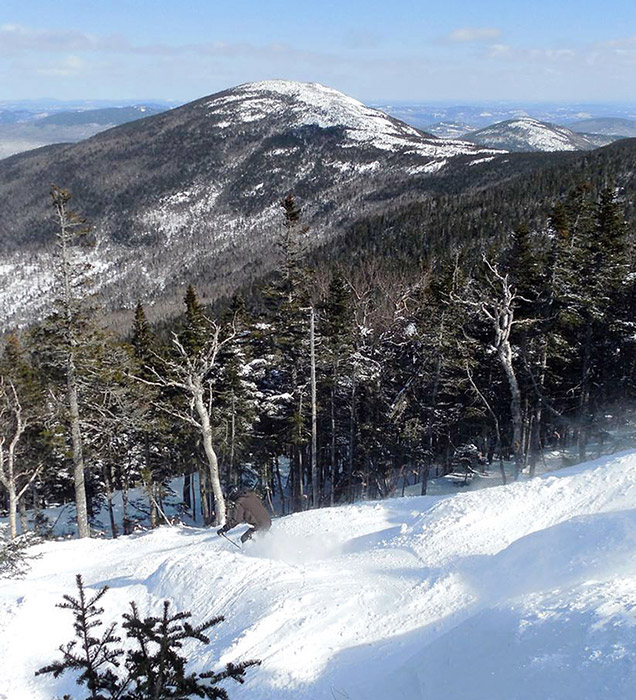 Vince boogies the bumps with Brackett Basin and Burnt Mountain in the background. Photo by Jim Kenney.

Among the many upper mountain groomed slopes we sampled at Sugarloaf on our second day White Nitro Extension was a true standout originating at the summit and featuring a commanding view. It is one of the longest and steepest groomers anywhere in the East. We also enjoyed lapping beautiful runs off the King Pine Quad Chair (1,074’ vertical), a trail pod that felt somewhat sheltered despite its location fairly high up on the mountain. 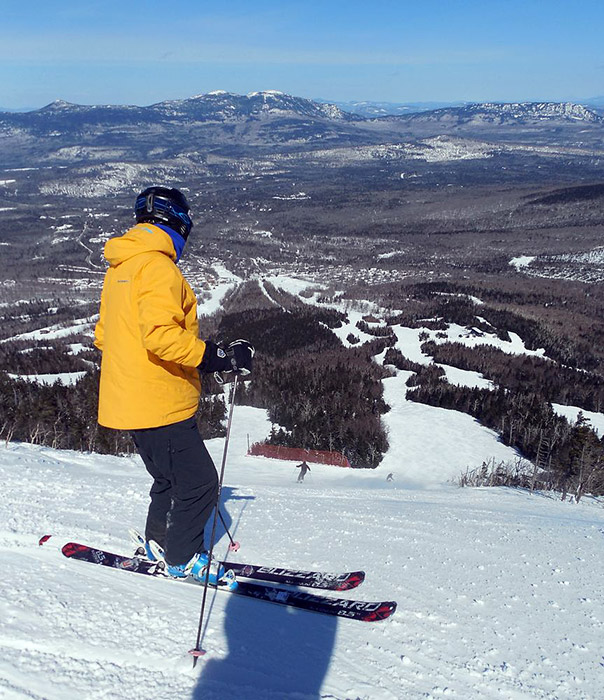 This image does not capture the breathtaking steepness of White Nitro Extension. Photo by Jim Kenney.

While our time at Sugarloaf was brief I have several key take-aways from the experience. It’s a huge, one-stop-does-it-all type of mountain with enough bumps, trees, and groomers for many days of fun and variety. There is a substantial bed-base adjacent to the ski area with the Sugarloaf Mountain Hotel assuming one of the very best locations. This hotel is worth the splurge and makes a trip to the backwoods of Maine darn near luxurious and definitely convenient. And lastly, if you are looking for a late season ski escape Sugarloaf will not disappoint even into early May, well after the flowers begin to bloom in the mid-Atlantic.