If there is one word in the American ski lexicon that is guaranteed to fire the imagination of expert snowriders it is Jackson; as in Jackson Hole, Wyoming. Vertical drop of 4,139 feet, summit elevation of 10,450 feet, and 2,500 acres of severe in-bounds terrain: this ski area is the gold standard by which all advanced mountains are measured. Jackson is big enough to offer something for everyone including lovely groomers with gorgeous Grand Teton scenery, but what really sets the place apart are Mo Betta steep ski lines than just about any other single mountain in the US. 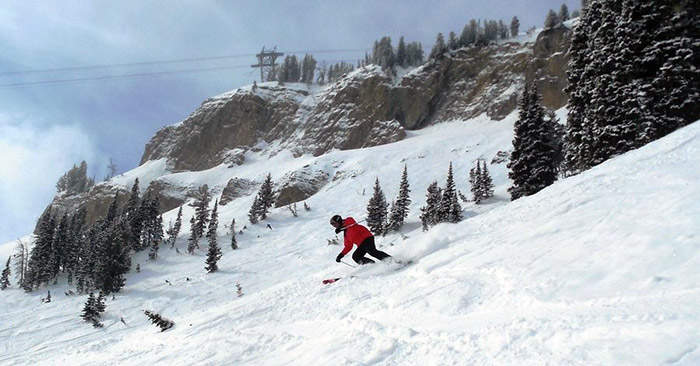 I’ve been reading and listening to tales about this mountain my whole life. Late last February 2015 in my 48th ski season I finally made it to Jackson. It has terrain that can test the very best, far beyond my humble, aging abilities. Nonetheless, I was fortunate to connect with a large group of fun and skilled skiers who challenged me to stretch my limits while catching a wonderful dose of Jackson’s hardcore, big mountain experience for three excellent ski days.

I had just concluded more than three continuous weeks of western skiing prior to arriving in Jackson. I was adjusted to the altitude and in reasonably decent shape for an old codger. Good thing because I hooked up with an aggressive gang of friends (including JohnL from the DCSki forum) who were shepherded around the mountain by highly regarded Jackson Hole instructor David Rogers. He’s a veteran of 10 years of instructing, 10 years of ski patrolling prior to that, and 25+ years as a resident in Wyoming. 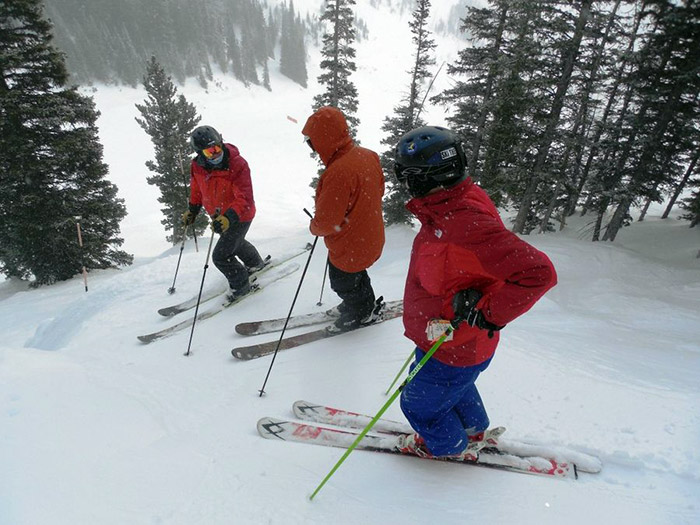 Conferring with our guide Jackson Hole ski instructor David Rogers on left. Reduced visibility was another reason to ski trees on our first day. Photo provided by Jim Kenney.

Maybe I should say goatherded, because the rule of my first day was not pasture grazing. It was steep tree skiing. Jackson Hole had a great base of snow and pretty much everything was open, but some of the high traffic groomers were a little glossy due to an unusual mid-winter rain event preceding my visit.

To optimize our experience David Rogers kept us in mostly north facing gladed terrain where the snow was still soft and chalky. But the lack of very recent white stuff meant the trees were full of high definition bumps. This was like Timberline, West Virginia’s Cherry Bowl Glades on steroids and with a bit more cant. We skied black diamond glades like Hoops Gap Woods and Riverton Ridge off the Thunder Quad Chair (vertical 1,456’), and the North Woods by the Hobacks (more on them later) and Cheyenne Woods accessible from the Sublette Quad Chair (vertical 1,630’). 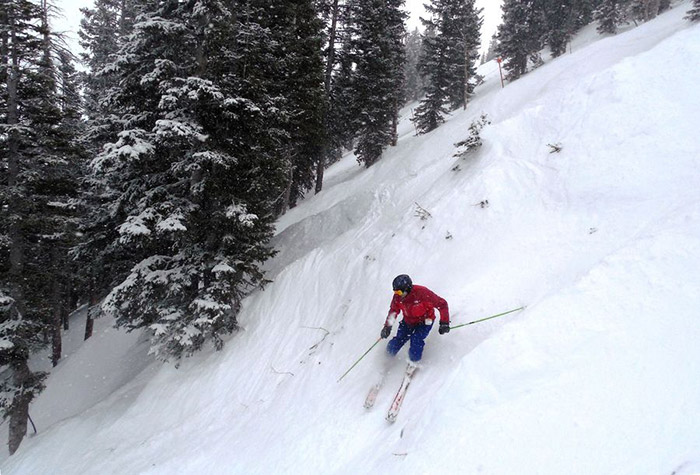 This mountain tour was with a group of speedy, advanced skiers and at one point we barreled through the James Bond Traverse so fast I can only remember it was somewhere near the Sublette Quad Chair and dang sketchy. Later, David Rogers told me the James Bond traverse leads to the bottom third of Pepi’s Ridge. From there you can ski the bottom of Pepi’s Run, Alta Chutes 2 and 5-3, hit The Liquor Cabinets, or take a huck off Nightmare and Daydream Rocks. Yeah right! By 2 p.m. my legs were fried. Corbet’s Couloir (more on that later) may get the headlines, but the Thunder and Sublette Quad Chairs serve the bread and butter of Jackson’s black diamond terrain. 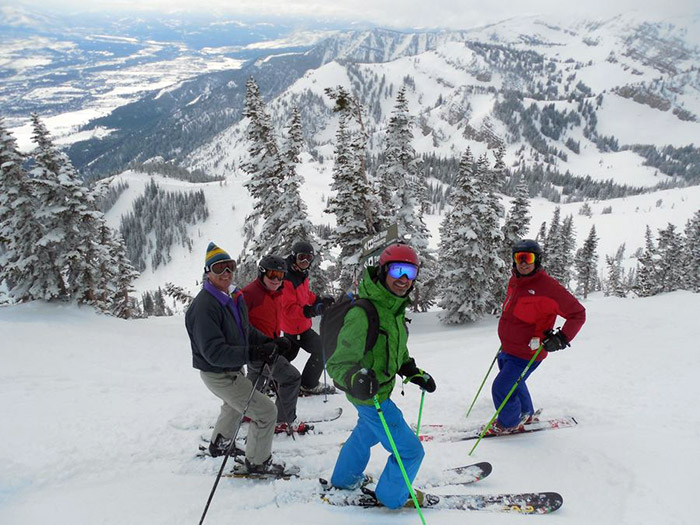 I started my second day by skiing fast groomers off the Apres Vous Quad Chair (vertical 1,805’). This is ostensibly an intermediate sector at Jackson Hole, but if runs like Werner and Upper Teewinot had any kind of bumps they’d be dark black diamonds in the mid-Atlantic. After that warm-up I connected with my friend JohnL again and others. We had a fantastic morning of informal exploration in Tensleep Bowl and other upper mountain zones highlighted by my first ride (finally!) up the 100-passenger Jackson Hole Aerial Tram (vertical 4,139’). After a good look at the legendarily steep Corbet’s Couloir, it’s doable by mortals — just not this one, I enjoyed an epic run from the summit down Rendezvous Bowl.

Entering Corbet’s Couloir by angling left down the precarious ramp in the right foreground, this Jackson veteran carefully side-slipped for about 20 feet, then made a six- to eight-foot drop while pivoting his skis in mid-air to land aiming right as shown: 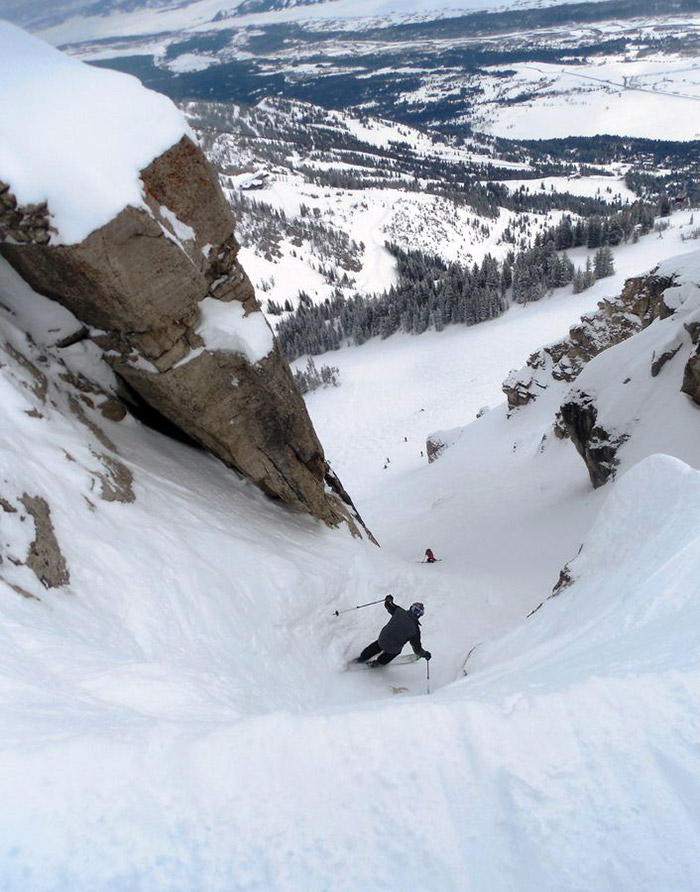 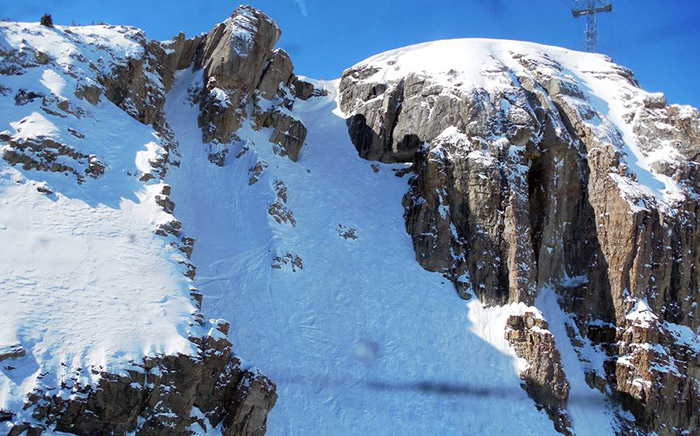 Corbet’s Couloir (center) as seen from the tram. Photo provided by Jim Kenney.

Jackson Hole has been discovered. It was one of the busiest of the ten resorts I visited during my nine week western winter sojourn. Perhaps many west coasties were migrating east due to the drought? On my first day I ate a hectic lunch in the very popular Rendezvous Restaurant at the top of the Bridger Gondola. On the second day one of JohnL’s friends from Wyoming took us to the bistro of the Alpenhof Lodge in the heart of the base area next to the tram building. It was a great choice for a late lunch serving reasonably priced German food in a beautiful and surprisingly uncrowded atmosphere. For dessert we shared a few shots of peppermint schnapps and transitioned to mostly mellow groomers in the late afternoon.

Speaking of mealtime, I stayed with a friend in a condo in downtown Jackson during my visit. It’s 12 miles via flat valley roads from the ski area. Jackson is a great tourist town that sees even more visitors in summer than winter. That means at peak winter ski weeks there are still many choices and good availability at motels, lodges, restaurants, bars, shops, etc. We cooked in some nights at our condo, but also dined one night at the fun Gun Barrel Steak and Game House.

On my third and last ski day I awoke to find an older moose calf sitting on the ground 25 feet outside the door of my accommodations in downtown Jackson, WY. It seemed almost tame, but even juvenile moose are big and unpredictable. I hastily carried my gear past the animal as it eyed me making my way to the parking lot. 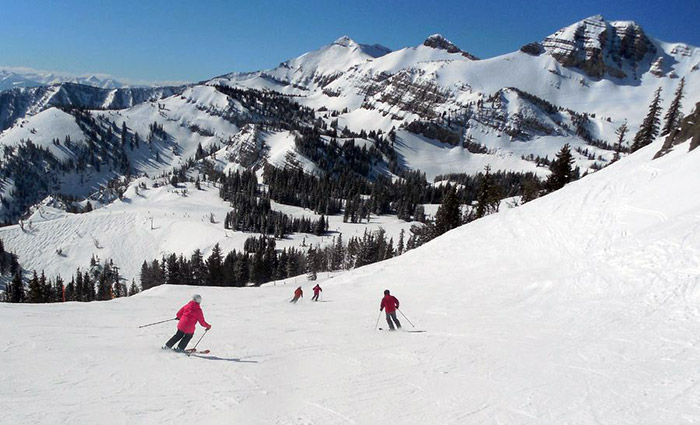 It was a beautiful sunny day and this time I joined a coed group of adults cruising upper mountain groomers. We skied scenic blue/black terrain like Laramie Bowl, Tensleep Bowl, Amphitheater, and eventually Sundance trail under the Bridger Gondola (vertical 2,730’) all the way to the base area. As the lunch hour approached the tram line shortened and when the gang went inside to eat I decided to head to the summit for a little time by myself. 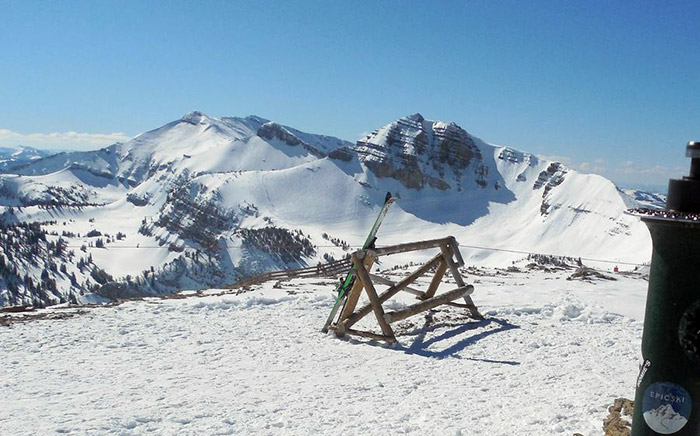 The view from the summit of Rendezvous Mountain, elevation 10,450 feet. Photo provided by Jim Kenney.

After riding the tram I climbed a small knoll to the true summit of Rendezvous Mountain (10,450’). I sat on a rock, broke out a peanut butter and jelly sandwich, and popped open a can of soda. I was pretty much alone for about 15 minutes and I slipped into a reverie about how great it was that my geezer-self finally made it to Jackson. Why had it taken me so long, I thought?

Then it happened. A young couple in street clothes knocked me off my self-absorbed perch. I guess they took a scenic ride up the tram. Out of the corner of my eye I saw the guy drop down on one knee about 20 feet from me and hold out a ring. She said yes to his marriage proposal and I cheered them on. Something about it brought me back from Planet Teton to Planet Earth and reminded me not to take things too seriously, and perhaps not to focus so intently on my own selfish pursuits. The best things in life are meant to be shared. 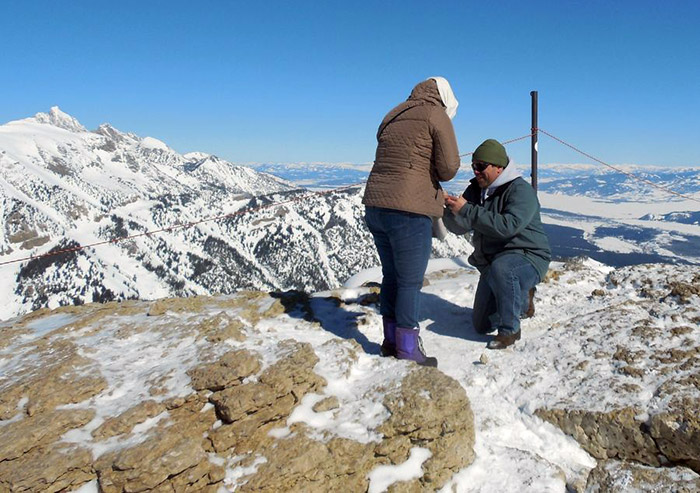 On the summit of Rendezvous Mountain Michael proposed to Josephine. She said yes. Photo provided by Jim Kenney.

After the cool couple’s moment on the summit I took a solitary line through Rendezvous Bowl way over near the ski area boundary above Cody Bowl. Then I closed out my three days at Jackson Hole by making a couple laps down the Hobacks with two ski partners I met on the Sublette Quad Chair.

The Hobacks are essentially hundreds of acres of robust side country that Jackson Hole has offered since the 1960s, long before the term side country entered the vernacular. They consist of ungroomed and mostly open mountainsides of black diamond steepness serrated by multiple gullies and sprinkled with trees.

Located on the lower southwest quadrant of the resort, the Hobacks receive sunny exposure. If you don’t catch ‘em with fresh snow or in soft spring conditions they can feel like wrestling an alligator. They represent about 2,500 vertical feet of no-turning-back commitment and I suppose I left the Hobacks with a few new teeth marks on my backside! It was a small price to pay for three amazing days at Jackson Hole.

More on Jackson Hole’s David Rogers: he’s originally from the Philadelphia area and moved to Wyoming in 1989. This will be his 10th season as a full time ski instructor at Jackson Hole Mountain Resort. His primary assignments are adult groups, levels 7-9, skiers that are serious about skiing and want to improve and move into challenging terrain. He also does privates on request and will accept bookings on his days off. David is certified in Alpine and Telemark skiing, Snowboarding, and as a Children’s Specialist. He teaches all ages and ability levels. You can reach David by contacting the Jackson Hole Mountain Sports School. 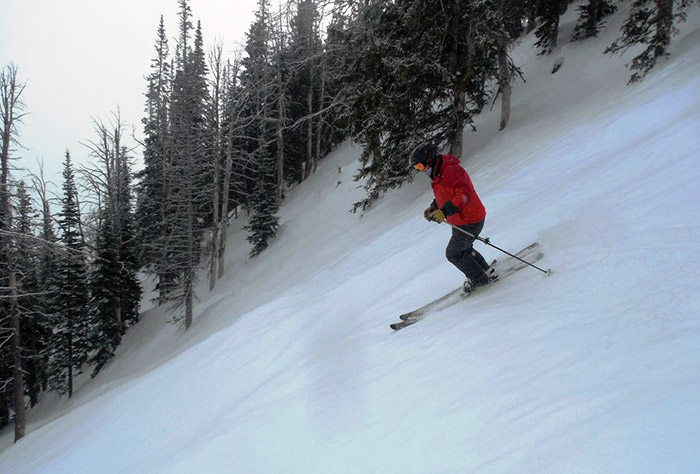 David Rogers at half throttle. Photo provided by Jim Kenney.