I finally did it. I hit the skier’s jackpot in my 49th winter skiing in the mid-Atlantic. It started when my wife Kathy and I checked into the beautiful lodge (remodeled in 2013) at Canaan Valley Resort, WV on Thursday, January 21, 2016. It was the eve of Winter Storm Jonas. Over the next three days The Valley was bombed with 28.5 inches of snow. It was one of those winter weather events that our local mountains experience only once or twice a decade if that, and we were there for the whole storm cycle enchilada.

I’ve skied numerous 6-12 inch powder days in the mid-Atlantic, usually in the form of sloppy seconds after a day spent digging out of suburbia. But in all my years I never had the good fortune to be onsite at a local ski area for a really BIG dump. Believe me, Winter Storm Jonas was big. Snow accumulations in the range of 30 inches were observed in seven Eastern states. 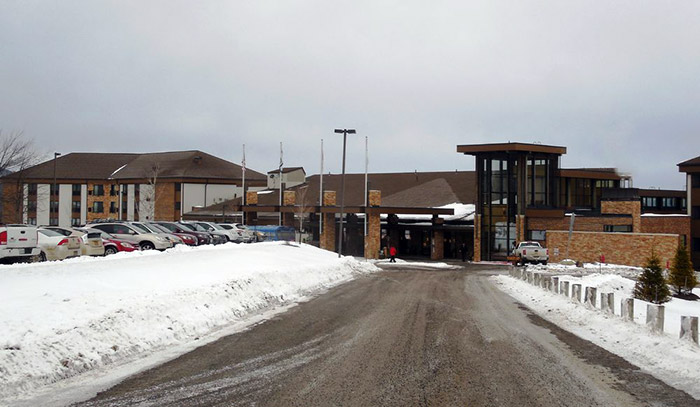 It was rather breezy and chilly (~15 degrees F) on Friday morning, January 22, 2016. The serious snow wasn’t expected until later in the day. My plan included downhill skiing with friends in the morning at Canaan Valley Ski Area and then cross-country skiing with Kathy in the afternoon at Canaan Valley State Park. A same-day winter double play is easily feasible at Canaan Valley because the resort offers both activities and necessary equipment in co-location, although you might want to get a good night’s sleep and a good breakfast in the Canaan Valley Lodge before attempting it. 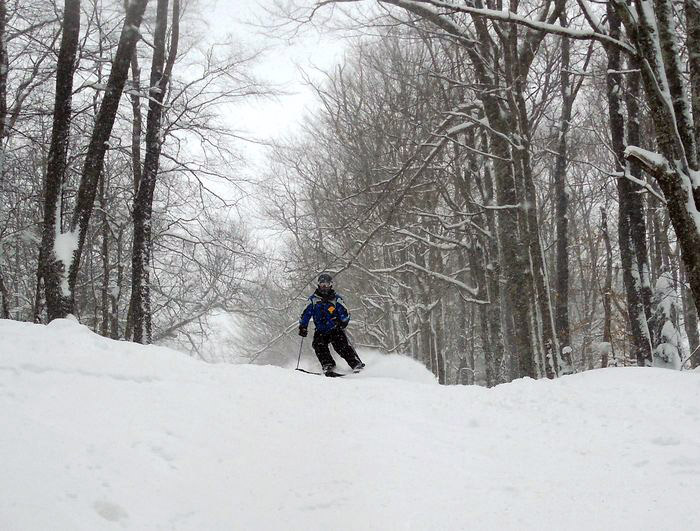 In the morning I made a dozen downhill runs under ominously graying skies. Conditions were good, but only going to get better. A light snow started around 10:45 a.m. on Friday and it kept coming more or less continually for the next 33 hours! We spoke to Mountain Manager Mike Chaney and he predicted, “all slopes open for Saturday.” The groomers were out repositioning piles of manmade snow in preparation for a big natural dump from the heavens. 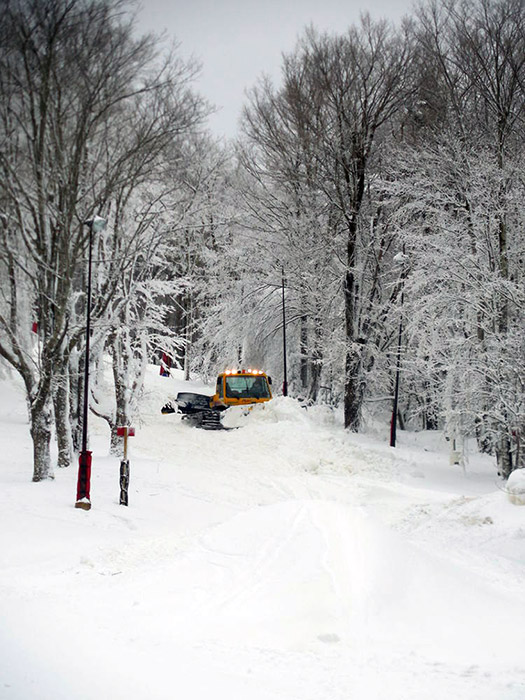 Around noon Kathy joined me for lunch at the slopeside Quencher’s Pub. We bumped into veteran Canaan Valley ski instructor Ray LaMora and had a great conversation over a tasty salmon sandwich. Ray had given three of our children a ski lesson many years before at Canaan Valley and he beamed when we told him our son was now a PSIA Level III instructor. Next I stopped into the Canaan Valley ski rental shop and picked up a pair of performance demo skis in anticipation of a potentially epic Saturday morning. They fixed me up with a sweet rockered ski that was 100 mm wide and 183 cm long from a boutique ski company out of Crested Butte, CO called Romp. 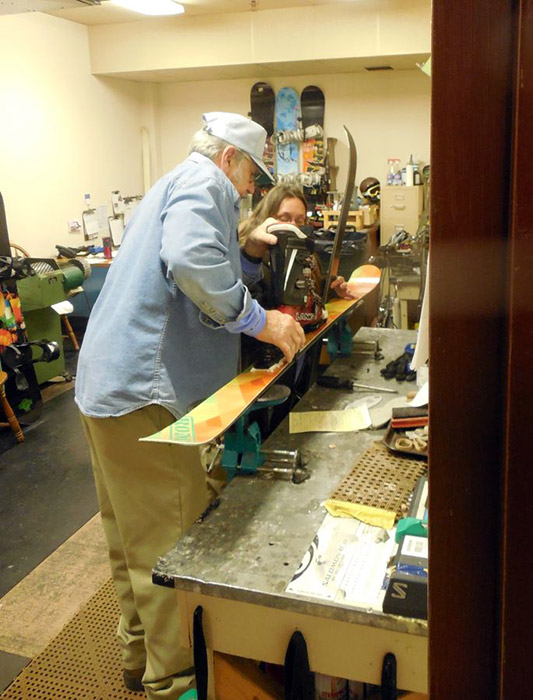 Kathy and I then drove back for a power nap in our room at the resort lodge before heading out for a cross-country ski session. By Friday afternoon about 6-8 inches of new snow had fallen, but the roads around the resort were well maintained and we were able to drive our Subaru the couple of miles from the downhill ski area to the lodge to the cross-country ski trails in the state park. In fact, I was shocked at how many guests continued to arrive at the lodge as late as 7 p.m. Friday night. Hardcore! After that the snow began to really intensify and the entire resort took on the feel of a cruise ship far out at sea, enveloped in thick fog. 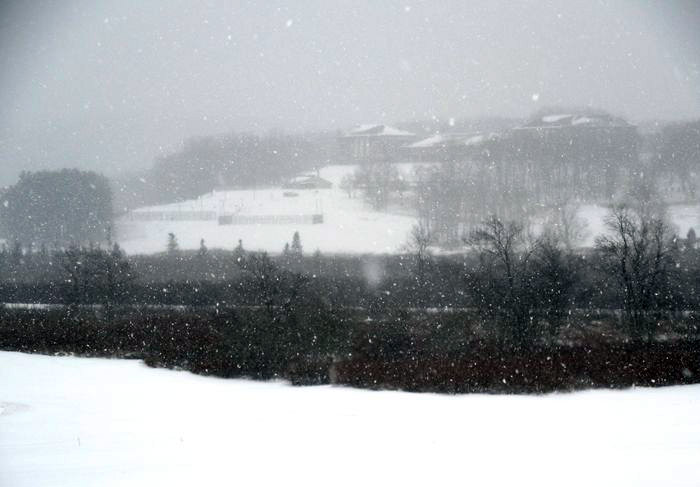 Friday, 4 p.m. view of Canaan Valley Lodge, with the snowstorm full-on by this point. Photo by Jim Kenney.

Saturday, January 23 was a storm day, a very Utah-like storm day. It was hard to tell exactly how much snow had fallen when I woke up at the lodge, but it was significant and still coming strong. I signed up for a “First Tracks” program at Canaan Valley Ski Area and was stoked! The free lodge shuttle bus was running through it all and got me to the ski area on time for a guided tour of the mountain from about 8 a.m. to 9:30 a.m. by several friendly members (including Mike and Paul) of the Canaan Valley Ski Patrol. It was quickly apparent that a legitimate two feet of new snow blanketed much of the mountain. 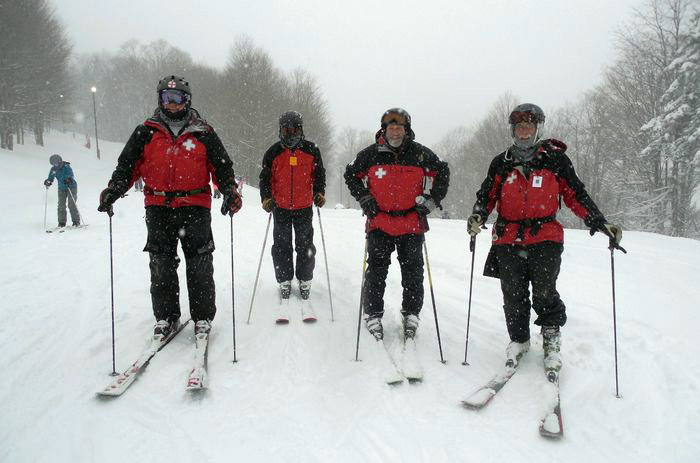 There are friends on a powder day, the Canaan Valley Ski Patrol! Photo by Jim Kenney.

It was an unbelievable day for First Tracks, but also a little weird. You had to pole your way through anything that was low angle and ungroomed. I tried to duck into an intermediate glade off the side of a trail once and came to a complete halt. When we finally made it to the black diamond Gravity trail the groomers had already made one narrow pass up the middle of it, but the sides were pristine. In an act of extreme generosity my First Tracks group let me go first down the left edge. JACKPOT! I had my mojo working with the Romp demo skis. It was so good we went back for a second pass. 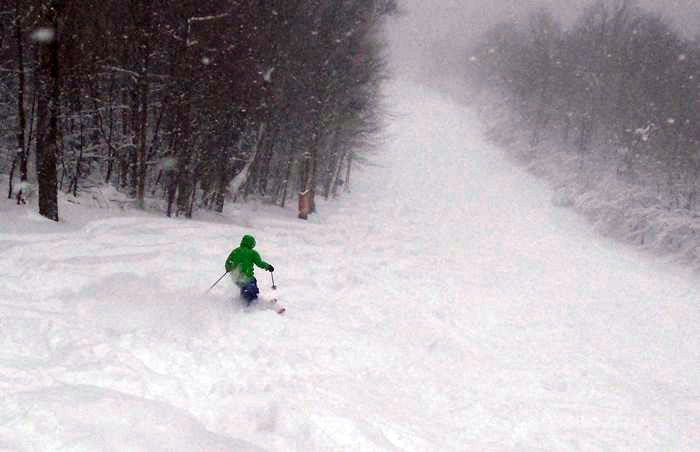 The skiing actually got better as the day went on. The moisture content of this snow was medium, not feather-light, and as it got packed by skiers and boarders you could hit it with more speed and dip into untracked areas with useful momentum. Unless you are among the fortunate few souls who ski deep powder all the time, it takes a little practice to adapt to it, especially a dense two feet of it. Everyone in my group struggled a bit, including me. But the rewards are great when everything clicks and you float down a steep slope like you are riding a magic carpet. 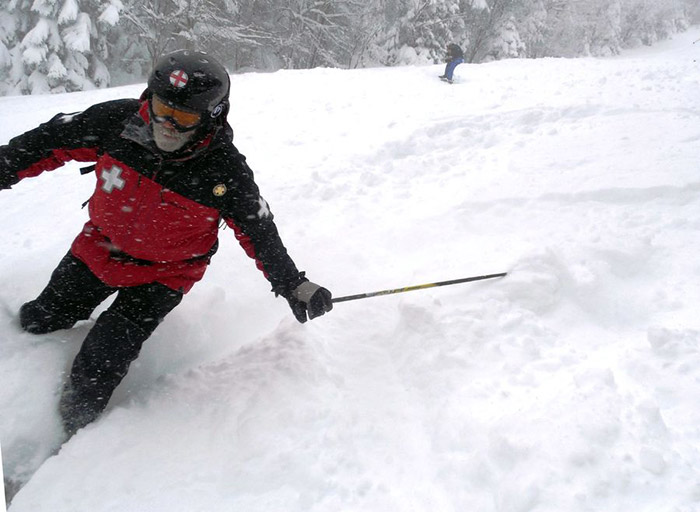 On Saturday afternoon Kathy signed us up for snowshoeing at nearby Canaan Valley State Park, but first I wanted to unbury my car in the resort lodge parking lot. The roads and lots were plowed, but there was still a ton of snow immediately around my car. It was an interesting and pleasing experience to observe the way the huge storm brought out the best in folks. Some very friendly guests helped me dig out my car so that Kathy and I could drive over to the resort’s cross-country ski and snowshoe equipment rental building. I was grateful a lady staffer had made it through the storm to operate the concession. The entire resort was well staffed throughout the blizzard. I was told a number of them spent the night in the lodge to ensure a continuity of operations during the stormy weekend. 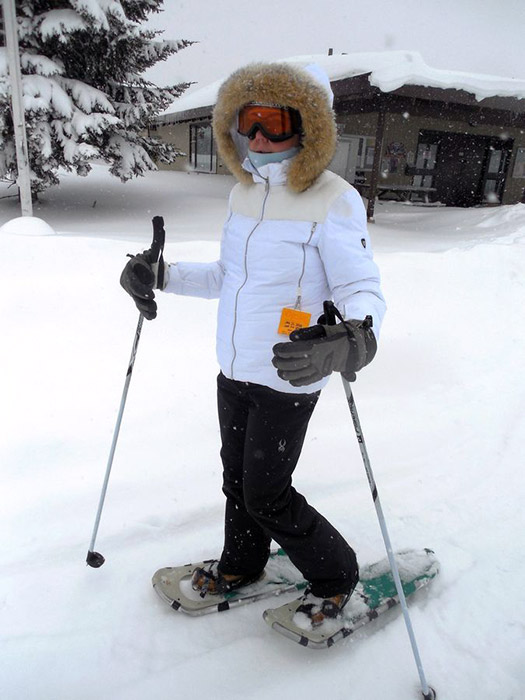 Sunday, January 24 was a classic “blue bird” day if ever there was one. The deep new coating of snow was revealed in all its glory by a bright sun. You can’t go skiing for a weekend in Canaan Valley without taking time to also make tracks at some of the other nearby ski venues. Timberline and Canaan Valley (downhill ski areas) and White Grass Ski Touring Center (Nordic ski area) are all located within about five miles of each other. For advanced downhillers Timberline has some excellent glades and several good black diamond slopes.

My ski instructor friend Jimmy Swann had made arrangements for me to observe an instructor clinic on Sunday morning at Timberline Ski Area. When I reported to T-Line for the 8 a.m. clinic with Mike Cavalaro, technical director of the Timberline Ski School, I was a little bit apprehensive. I’ve never been an instructor and I have a lot of flaws in my technique. Were they going to make me the clinic’s crash test dummy? Nothing of the sort happened. I met great guys and gals and it was a very cool experience giving me insight to all the fine effort instructors make to become the best teachers they can be. Mike Cavalaro is an exceptional teacher/communicator: clear, direct, persuasive and always on target with his commentary. 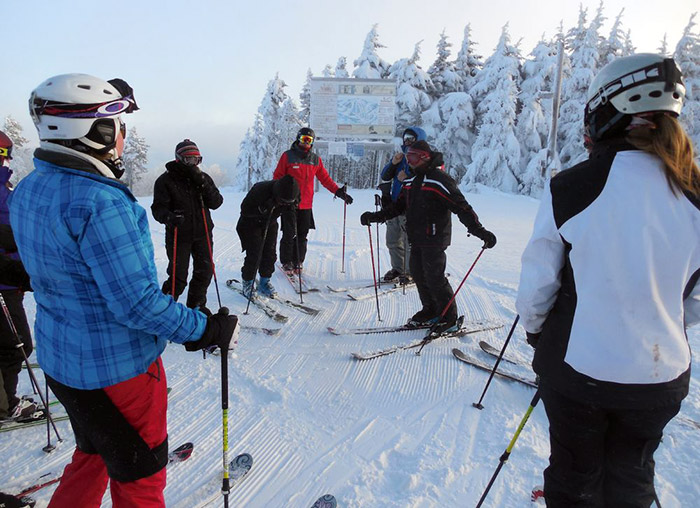 When the clinic was over I went freeskiing in superb conditions with Jimmy and his T-Line friends. We lapped the Timberline glades a few times and once I took a wipeout in snow that was so deep I couldn’t free one leg. Fortunately, Jimmy was nearby and helped pull me out. It was a testimony to the amazing conditions. Never in my 49 seasons had I been in such a deep fix on a mid-Atlantic ski day! 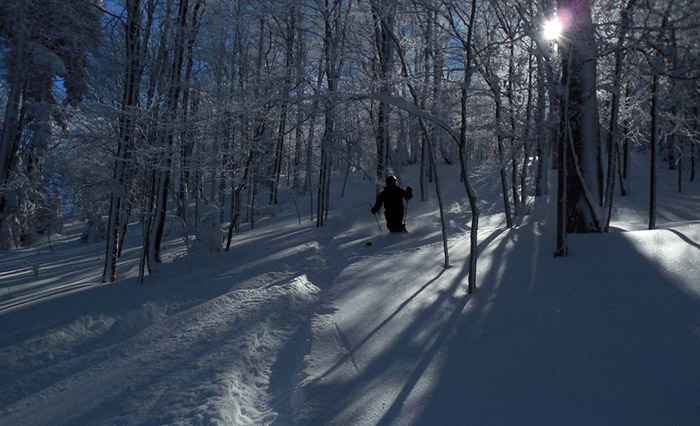 It was a weekend of firsts for me, which is saying something since I’ve skied the mid-Atlantic for 49 consecutive seasons with probably more than 600 local ski days. I had never been onsite to ski as much as 2+ feet of snow before in our region. I had never participated in a “First Tracks” program before anywhere, and it was awesome that it occurred on a monster powder day at Canaan Valley. I had never observed an instructor clinic before. I had a blast with the folks at Timberline for that and I also got some good tips out of it. 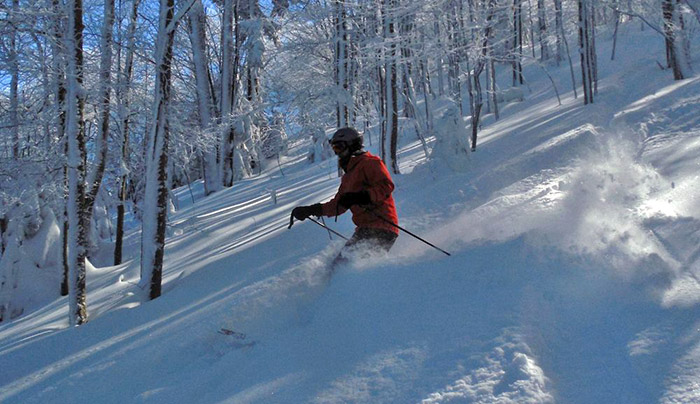 My wife, a “retired” downhill skier, had a great time too. We went X-C skiing on Friday afternoon and snowshoeing both Saturday and Sunday afternoons, all in the beautiful Canaan Valley State Park. She came home really enthused about snowshoeing and we have since bought our own snowshoe gear in preparation for Winter Storm Jonas II. 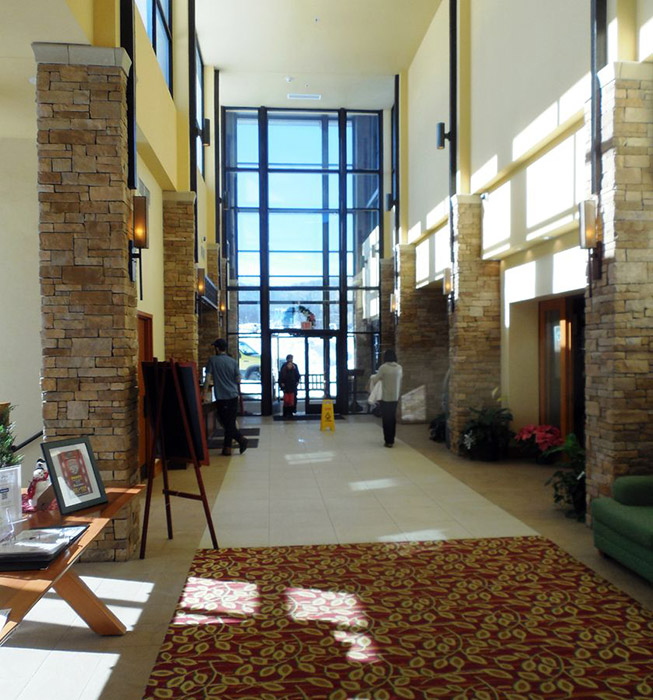 Beautiful Canaan Valley Resort Lodge was our calm amidst the raging storm. Photo by Jim Kenney.

Lastly, the entire staff at the Canaan Valley Resort was crazy busy during the Winter Storm Jonas weekend. This was a serious weather event! There were hungry guests flocking to food service venues, ski lifts to be loaded, leaks from frozen pipes to be mopped up, and massive amounts of snow to remove. The staff worked hard in all departments and deserves universal kudos. The captain of the Canaan Valley Resort ship is General Manager Steve Drumheller. His crew passed the Jonas test with flying colors.