I have been fortunate to visit Aspen, Colorado in each of the last three winters. It’s been nice each time, but in early February 2016 I had my best experience there ever. I spent four days skiing in Aspen with my adult son and a gang of friends. The area received 40” of snow in the week prior to our arrival. They had a great early season before that and conditions were beyond good. They were Aspen Supreme!

One of Aspen’s most outstanding qualities is its assortment of four extraordinary ski areas within a ten mile radius: Snowmass, Aspen Mountain, Aspen Highlands, and Buttermilk. The first three, in my opinion, are among the best places to make tracks in the US. During our visit we skied a day each at Snowmass, Aspen Highlands, Aspen Mountain, and then an encore day at Aspen Highlands. Buttermilk is known for low crowds and world class terrain parks, but we’ll have to get to that one another time.

Besides the variety of spectacular terrain with reliable snow cover, Aspen has other traits that contribute to its supremacy as a ski vacation destination. The town has a wild-west-meets-Victorian-era character, with a first rate mix of restaurants, bars, upscale shops, and accommodations. The Rocky Mountain scenery around Aspen is drop dead gorgeous, especially as you ascend the summits of the different ski areas. And last, but not least, Aspen is not crowded, not even during the holidays or mid-winter periods with superb ski conditions. It may cost you a few more shekels than some resorts, but it is an amazing and reliable crowd beater throughout the ski season.

Our first day was spent at Snowmass. It is huge with 3,332 acres of inbounds terrain, 21 lifts, and a 4,406-foot vertical rise. The fresh snowfall stopped a couple days before our arrival, but we enjoyed sunshine and copious loose snow in various glades and on the fringes of groomed terrain. Snowmass is a great place for a first day Aspen warm-up. It is one of the best locations on the planet for cruising intermediate terrain to your heart’s content. 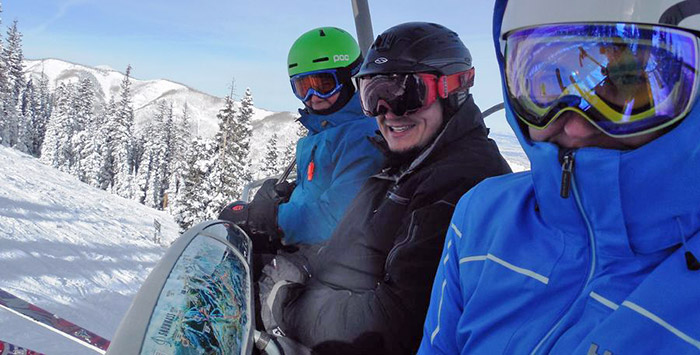 Stoked for a morning warm up on the Big Burn at Snowmass. Photo by Jim Kenney.

It’s obscene to attempt a thorough survey of Snowmass in one day, but we tried. We skied like chickens without heads and still came away with something to crow about. The Hanging Valley Glades were loaded with untracked snow from the prior storms. Longshot Trail (5+ miles in length) off Burnt Mountain was a marathon of moderate angle powder bumps. The Big Burn and Green Cabin trails were Blue Square Nirvana. 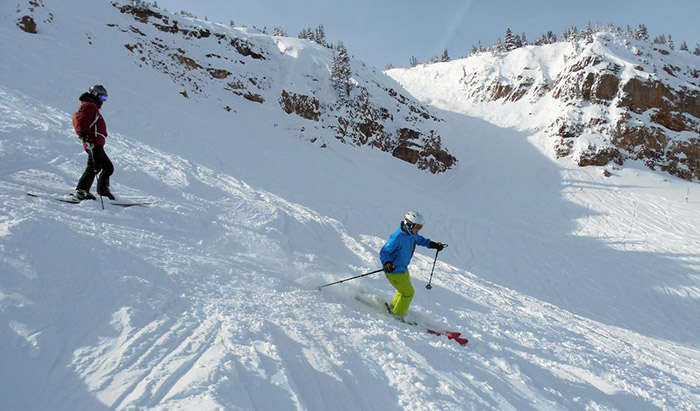 After our great day at Snowmass we went to a party at Zane’s Tavern with a gang of friends. Zane’s is slopeside at Snowmass Village and has shuffleboard, pool, foosball and Philly Cheesesteaks. What more could you ask for?

Our second day was an absolutely epic one at Aspen Highlands. Aspen Highlands might be my very favorite of the nearly ninety ski areas I have visited in North America and Europe. It’s got amazing advanced terrain including the incomparable Highland Bowl, fabulous scenery, and huge vertical (3,638 feet lift served, plus another ~700 feet if you climb the Bowl), yet still has an intimate “locals mountain” feeling that lets you get acquainted quickly. I dropped part way into Highland Bowl twice this day after taking the free snowcat ride. My son and others in my group made the full hike to the 12,392-foot summit of Highland Bowl one or more times. 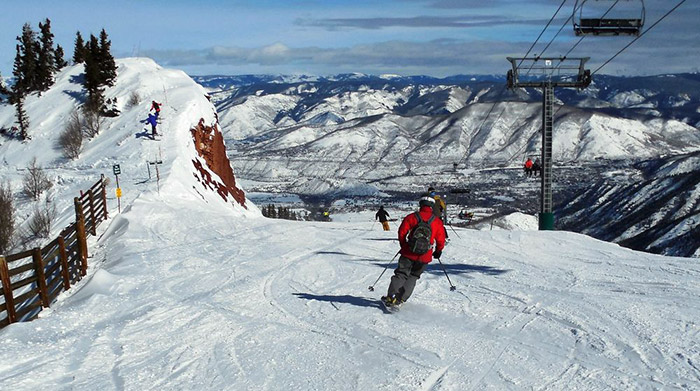 The Bowl is wild, exposed, and totally natural. It is rare to see every inch of it covered in soft, hero snow as we did that day; truly a supreme experience. The vertical rise on the hike to the summit is about 700 feet and if you ski the full descent from the peak to the base of the Deep Temerity chair, you’ve completed 2,400 vertical feet of some of the best double black diamond “side-country” terrain a recreational skier/boarder can readily access in the US. Do it if you can! 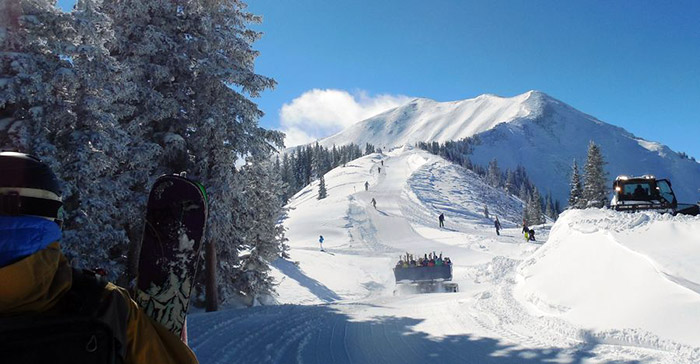 Waiting for the next free snowcat ride to Highland Bowl. Photo by Jim Kenney.

On our third day we went to Aspen Mountain (aka Ajax). Don’t let a casual groomer skier tell you Ajax is small and boring. They belong at Snowmass. Ajax is an outstanding mountain for black diamond snowriders with gnarly bump runs, steep glades, and all kinds of nooks and crannies between designated trails. Plus, it’s one of those rare places where you can lap 3,000+ vertical feet all day long using a single lift if you like, the Silver Queen Gondola.

Deciding which glade to take under the Aspen Mountain Gondola. Photo by Jim Kenney.

Aspen Mountain also has this amazing dichotomy. Lift lines, even on the gondola, are often miniscule. Yet, a hundred feet away you can unbuckle your boots and stroll one of the most sophisticated ski resort towns anywhere. Is there a lot of conspicuous consumption? Sure, but there are also a lot of regular folks splurging for an elite ski experience away from the unwashed masses. Even a ramen noodle fan like me can go for a little of that once in a while.

Cruising Ruthie‘s Run at Aspen Mountain with the town as a backdrop. Photo by Jim Kenney.

Our fourth day was a short one, back at Aspen Highlands. My son and I had to pack up, ski for a few hours, and then drive to Salt Lake City where he lives, and I planned to catch my flight home to the Washington DC area the next morning. Nonetheless, I made a bunch of classic Highlands runs when I connected with my friend John Webb. John is a long time skier and a retired Navy civilian employee like myself. He lived in suburban Maryland for many years before recently moving west with his wife. John turns age 70 in 2017 and I really admire his ability to manage himself efficiently in the steep and deep.

That blue speck in the center of this picture is John Webb on Sodbuster Trail at Aspen Highlands. Photo by Jim Kenney.

Despite his seniority, when you meet John on the hill his credo is, “let’s ski something gnarly!” He and I skied Sodbuster, a bodacious bump run in the Deep Temerity trail pod. We took a cat ride together and dropped into the bottom half of Highland Bowl in sunbaked conditions that were much tougher than two days before. We did a lap on Deception Trail in gorgeous Olympic Bowl. We did the lower mountain moguls over by Moment of Truth trail. It was like John and I were doing a tour of the greatest hits of Aspen Highlands in just a couple hours together! What a blast and a great way to say goodbye to Aspen. 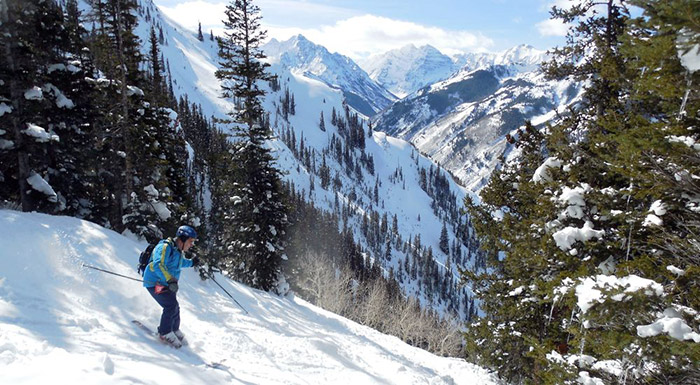 John Webb on Deception Trail in Olympic Bowl at Aspen Highlands with 14ers Pyramid Peak and the Maroon Bells in the background. Photo by Jim Kenney.

I guess I’ve been to Aspen a total of five times now over the years from 1976 to 2016. It’s got a great vibe, tremendous variety and fully deserves its status as an iconic American ski resort. You gotta love Aspen Mountain with ridiculous proximity to a world class resort town. It’s hip, cool, and challenging enough to kick your butt. Snowmass is family friendly and sheer bliss for intermediates. It also has varied terrain, good parks and a lively base village. Aspen Highlands is simply one of the best proving grounds for advanced snowriders anywhere with spectacular scenery thrown-in as a bonus. Some day I may even get to Buttermilk.

Aspen’s always great. But when you catch it in February with good friends, tons of loose snow lying around, and four days of sunshine — it doesn’t get much better than that. If ski areas were pizzas and the toppings were mountains, snow, and resort towns, I’d order an extra large Aspen Supreme.