DCSki’s Editor is in the midst of a road trip through western states, in search of snow and adventure. After spending a day at Vail, he headed just down the road to sister property Beaver Creek Resort.

Something amazing happened on Wednesday, February 21, 2018.

The sun came out in Colorado.

That’s not exactly unusual. After all, on average, Colorado is blessed with over 300 days of sunshine per year. I just hadn’t seen any since arriving in Colorado four days prior.

I’m not complaining; it generally doesn’t snow when the sun is shining, and recent days had brought plenty of much-needed snow to Colorado. Putting up with a few frigid, snowy, slippery-road days was a small price to pay for the conditions and sunshine that greeted me as I drove to Beaver Creek Resort. 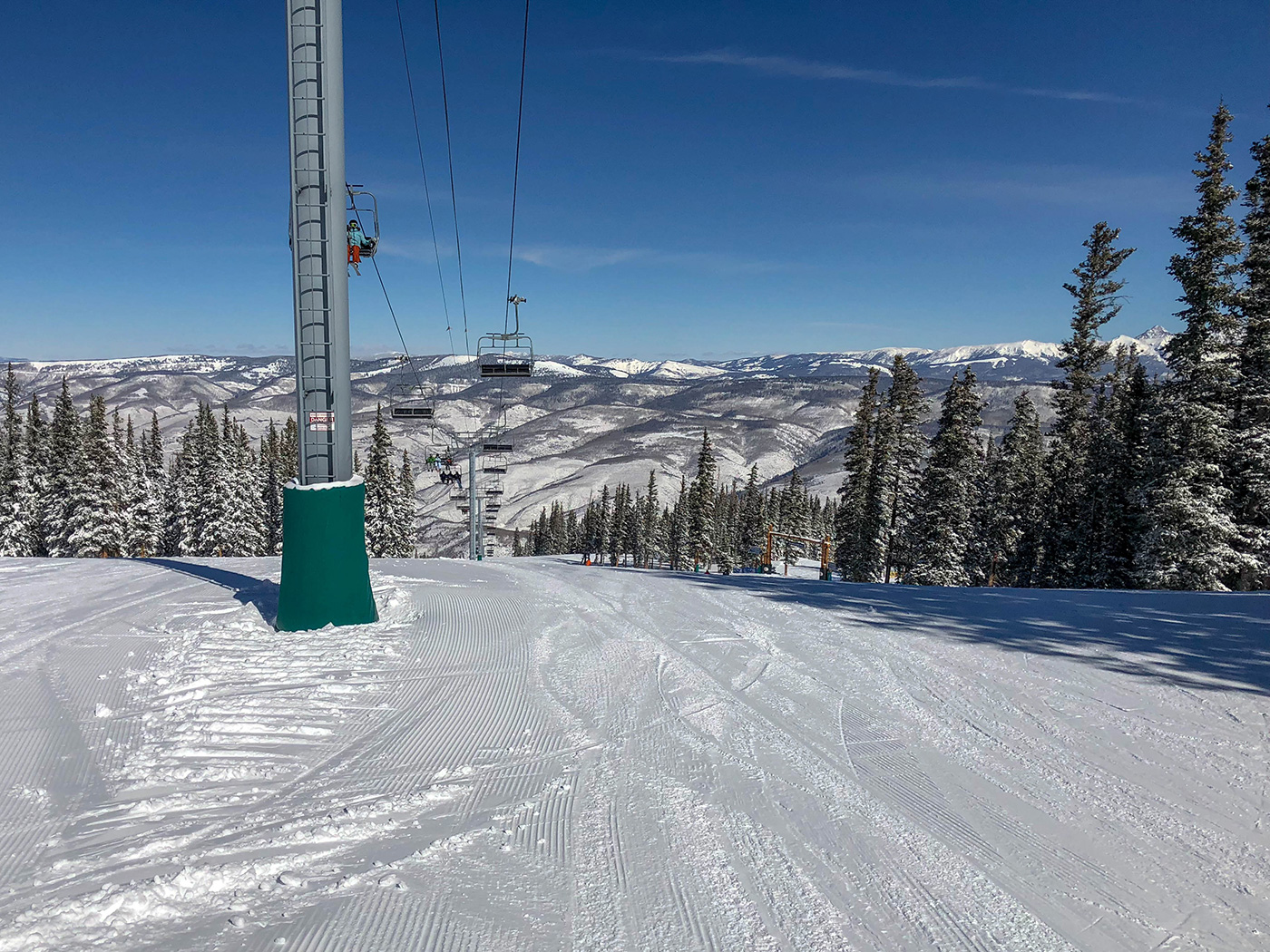 In fact, Beaver Creek is the last of the big resorts along the I-70 corridor. Because of that, it tends to be one of the least crowded. A lot of Denverites in pursuit of powder will turn off of I-70 well before they reach Beaver Creek.

Their rush is your gain. Beaver Creek is a substantial mountain with over 3,000 feet of vertical, 150 named trails, 24 lifts, and over 2,800 skiable acres. Beaver Creek is also blessed with an average annual snowfall of 325”. Less crowds means more freshies for longer periods of time after a snowstorm.

I drove from Glenwood Springs to Beaver Creek, arriving in just under an hour. I parked in the Elk lot, one of two popular day lots located in the town of Avon. (The other is the Big Bear parking lot.) Parking is $10 per day. That doesn’t get you close to the slopes, but it does get you close to a free shuttle that completes the trip to the slopes.

Beaver Creek has always been about luxury, and you notice that upon arrival. At many ski areas, you have to make an awkward hike up steps in ski boots to arrive at the base area — an exercise that has been scientifically proven to be impossible to do with grace or dignity. At Beaver Creek, a series of escalators allows you to ride up to the slopes with unparalleled grace. 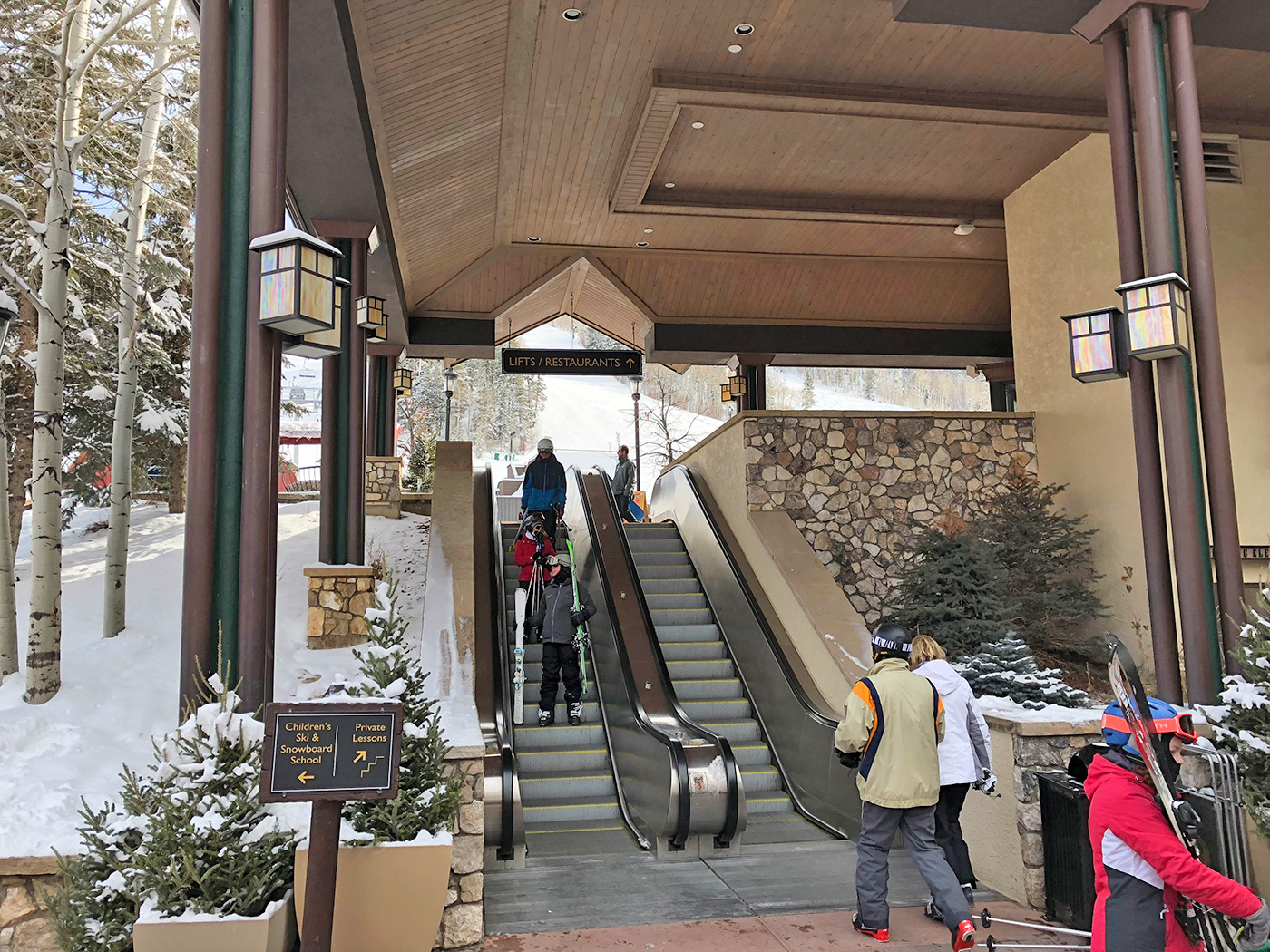 Escalators expedite the trip to the base area at Beaver Creek. Photo by M. Scott Smith.

I wasn’t the first to arrive at Beaver Creek — people staying at slopeside properties had a first-movers advantage. But they also paid a lot for that advantage; slopeside lodging at Beaver Creek is, unsurprisingly, very expensive. Cheaper options are available in the town of Avon, just downhill from the resort, or down the road in Edwards, or even further down the road in Glenwood Springs.

I don’t think I missed much by not staying slopeside. I shared my first lift ride up the mountain with a couple who had decided to check out of the slopeside Park Hyatt early.

“We’ve stayed there for years, but something is different this time,” explained the husband to me. “They’re cutting a lot of corners.”

He proceeded to rattle off a long list of “misses” during their stay — cold boots in the morning, having trouble finding employees to assist them, etc. He admitted that individually, each might be forgivable, but collectively they had soured the experience.

“When you pay the price we’re paying, details matter,” he explained.

I theorized that the snow drought early in the season may have affected revenue, requiring a drop in staffing. Certainly, Colorado ski areas saw decreased visits in the front half of the season when Mother Nature didn’t cooperate. Thankfully, snow began to fall generously around the time of my trip (you’re welcome, Colorado!), providing a chance for the ski industry to catch up.

After a couple express lift rides, I had arrived at the top of Beaver Creek Mountain, at 11,440 feet above sea level. The views were typical Colorado-extraordinary. One nice thing about Beaver Creek is that those top-shelf top-mountain views are accessible to beginner skiers — something that’s definitely not the case at ski areas like Jackson Hole. Right at the top of the mountain is a nice collection of green slopes, allowing new skiers and snowboarders to feel that they’re “for real” skiing on a large mountain, instead of being relegated to some flat areas near the bottom. 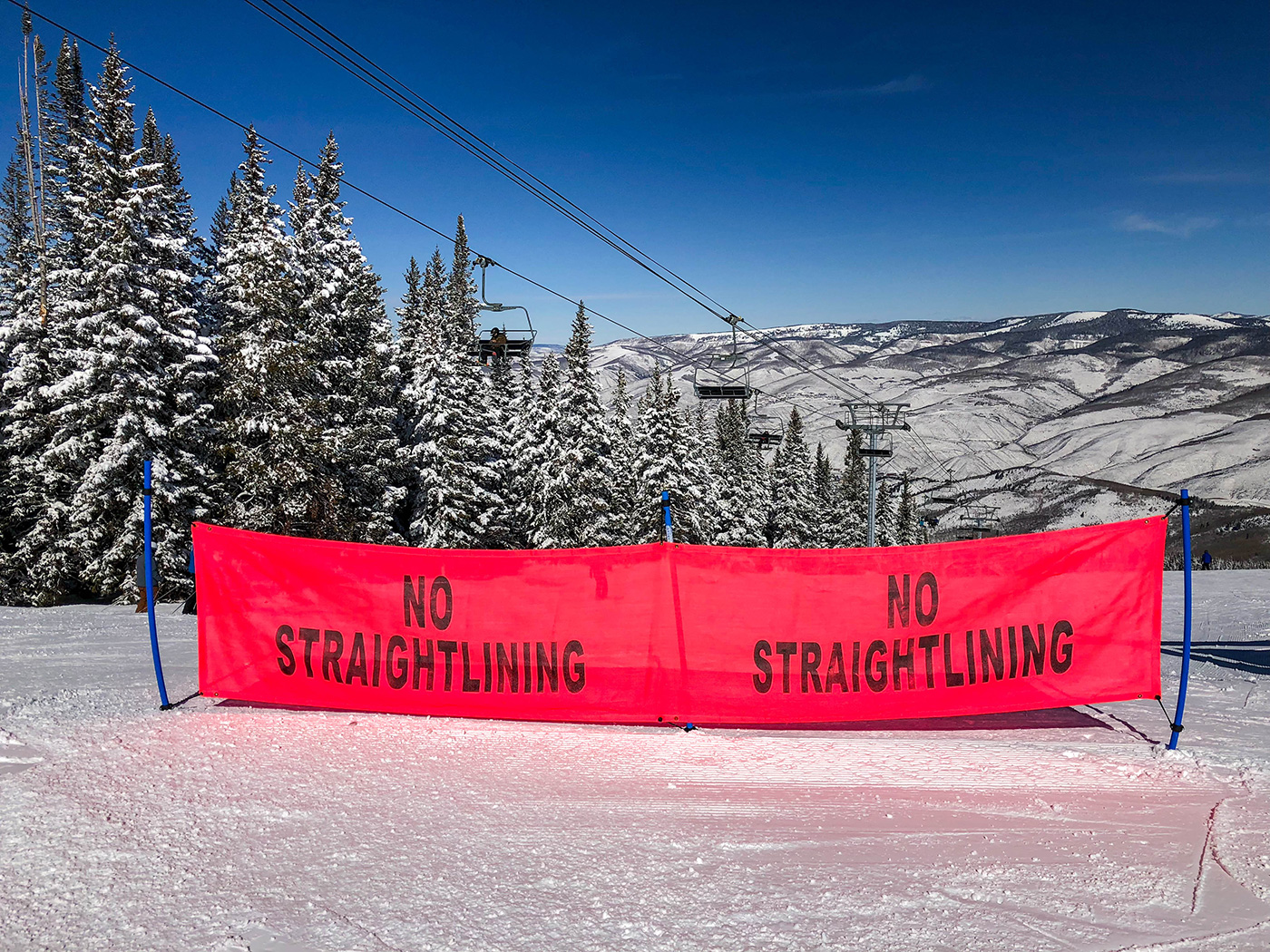 I did not straight-line. Photo by M. Scott Smith.

Beaver Creek does a great job grooming the slopes. I also noticed ski patrollers making horizontal lines in the snow with their skis before each lift tower. I guessed it was to help deter skiers from blindly following the groomed corduroy right into a tower; I’m not sure I’ve seen that done at other ski areas, or perhaps I just haven’t paid attention.

After trying out some of Beaver Creek’s groomers, I decided it was time to ski to a different town.

That’s right: that’s something you can do at Beaver Creek, something that’s common in Europe but a rarity for American ski areas. 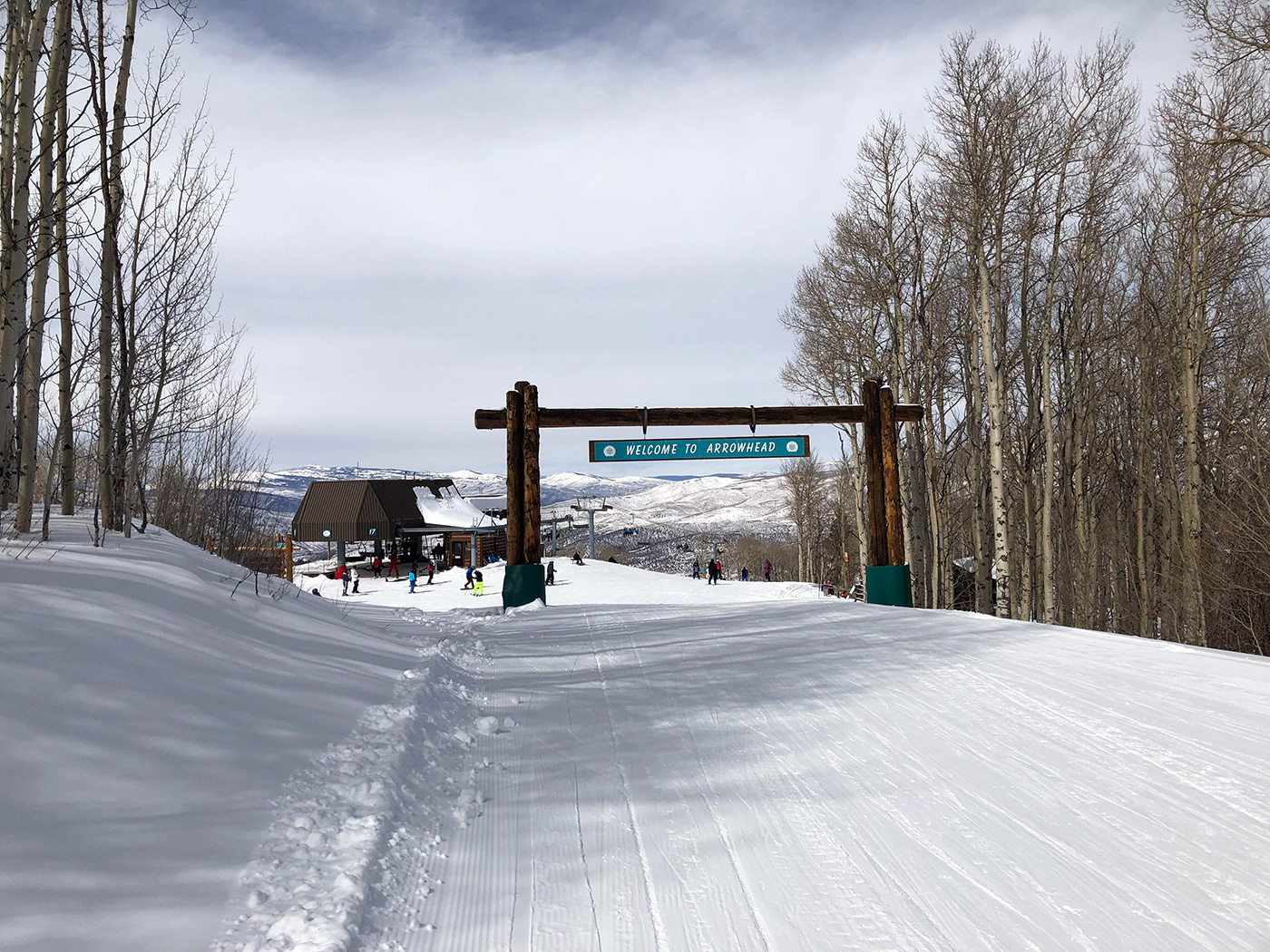 Ski from village to village at Beaver Creek. Photo by M. Scott Smith.

Once-separate ski areas were long ago combined into a single ski area, and you can work your way from Beaver Creek over to the Arrowhead Village, stopping at Bachelor Gulch along the way. It takes a bit of traversing, but the character of the slopes changes as your work your way across the mountain. You get the sense that the climate differs from one side of the resort to the other, as well.

The sun was out, but it was still terribly cold, and before I traversed the entire mountain I found myself dreaming of a place to warm up. That’s when I came across the Candy Cabin. That’s right — right on the mountain, you can stock up on candy. The small cabin has buckets full of a wide variety of candy, and you can fill up a bag with some sugar energy and pay by the pound. (Just beware that you’ll pay a lot per pound — this is a ski area, after all — so don’t go too crazy.) 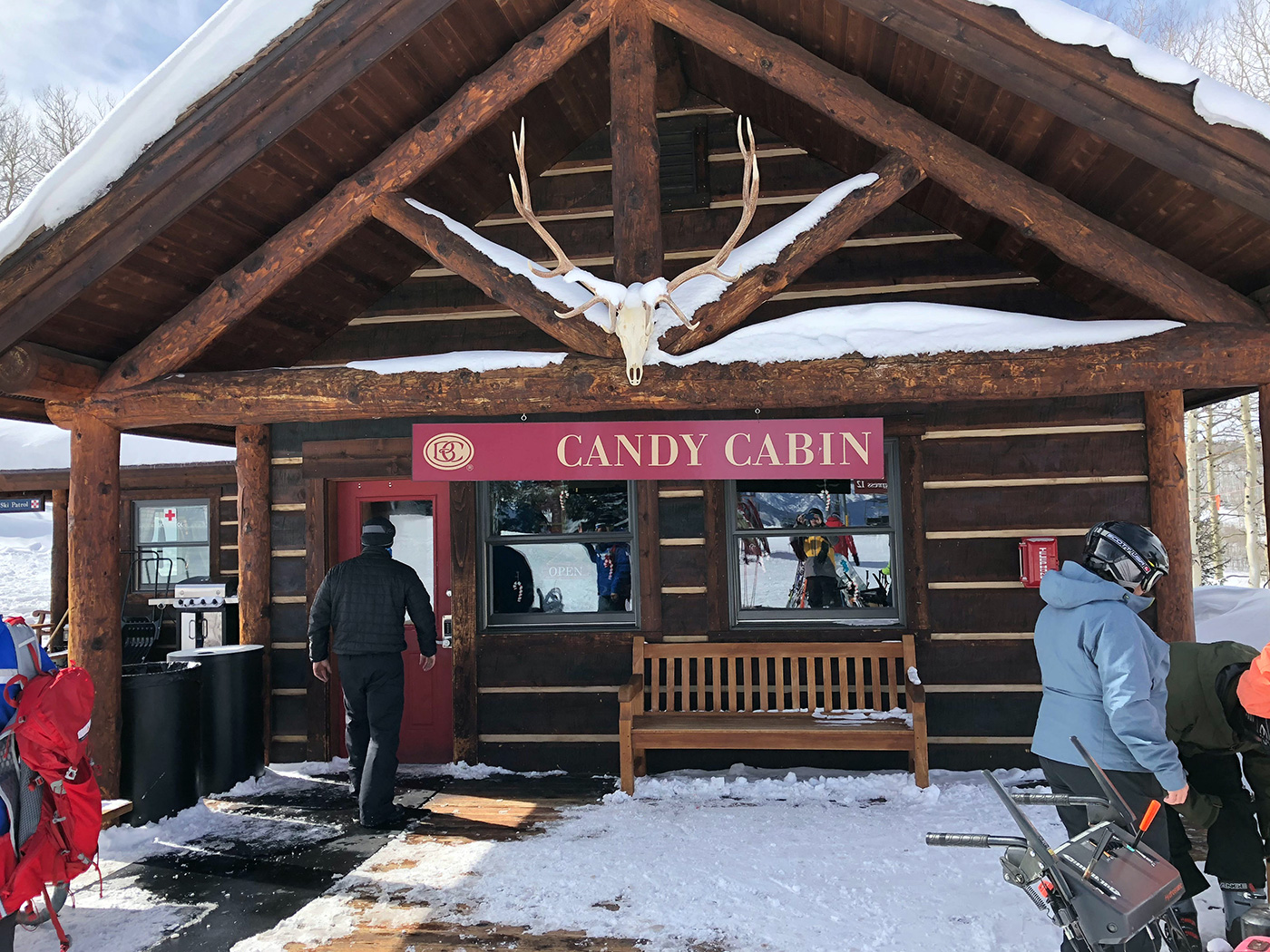 Have a fixin for candy while in the middle of skiing? The Candy Cabin is not a mirage, Photo by M. Scott Smith.

Another neat dining option I saw at Beaver Creek was Mamie’s Mountain Grill, with the tagline “slightly roughing it.” Sure, if you want to be lazy, you can purchase a sandwich that is made for you. But if you want to be a true mountain man (or woman), you can buy raw beef and slap it on a grill yourself. This looked like a lot of fun, but it looked like it would be more fun if the temperatures weren’t in the single digits. I imagine Mamie’s Mountain Grill is hopping during warmer Colorado spring skiing days. 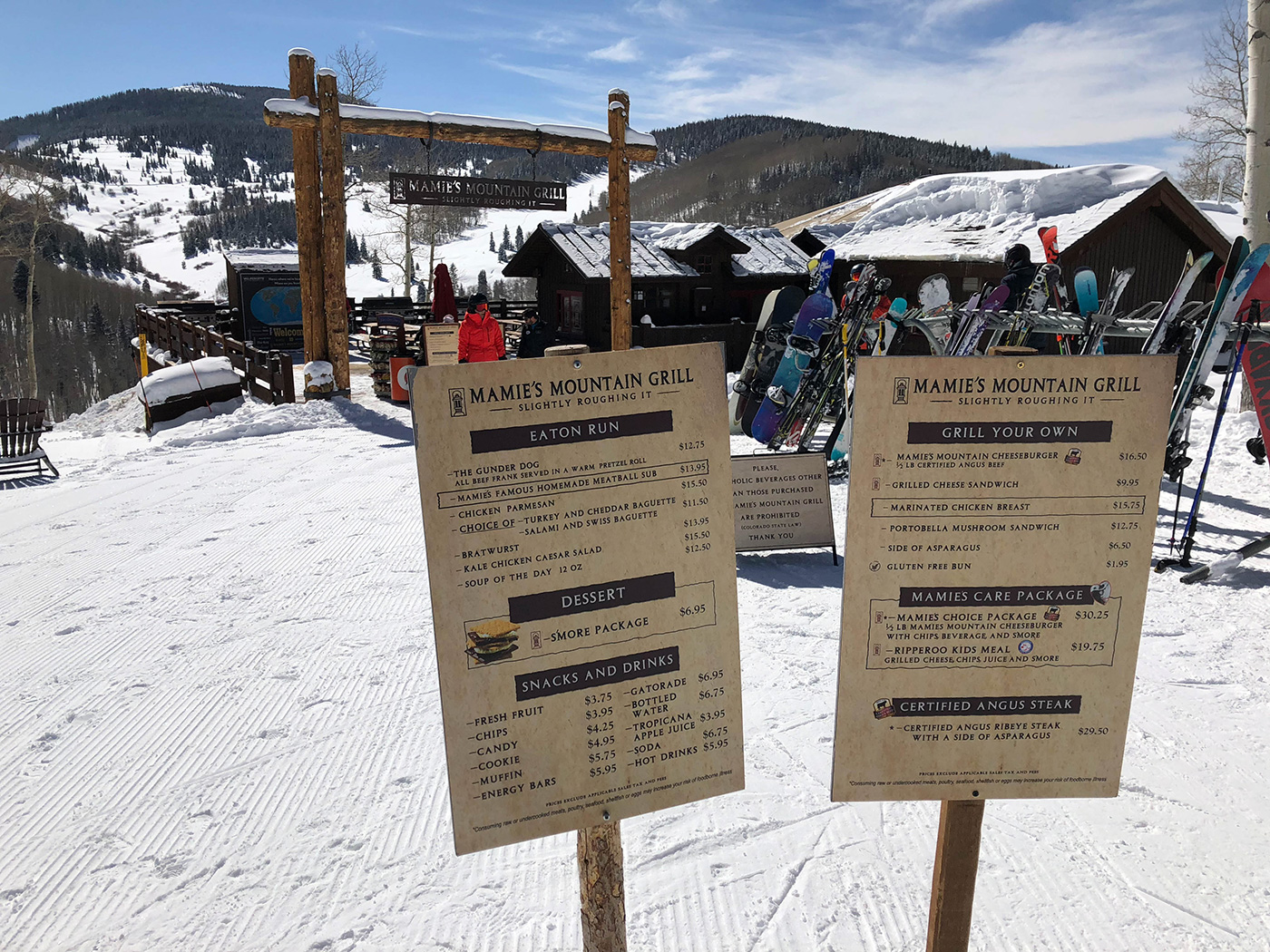 If you would prefer to grill your own lunch, you can do that here. Photo by M. Scott Smith.

In between the main Beaver Creek area and the Arrowhead Village, you’ll find Bachelor Gulch. The base of Bachelor Gulch is home to the Bachelor Gulch Ritz-Carlton, a fancy and expansive hotel resort that would be an awesome place to stay if budget was no consideration. 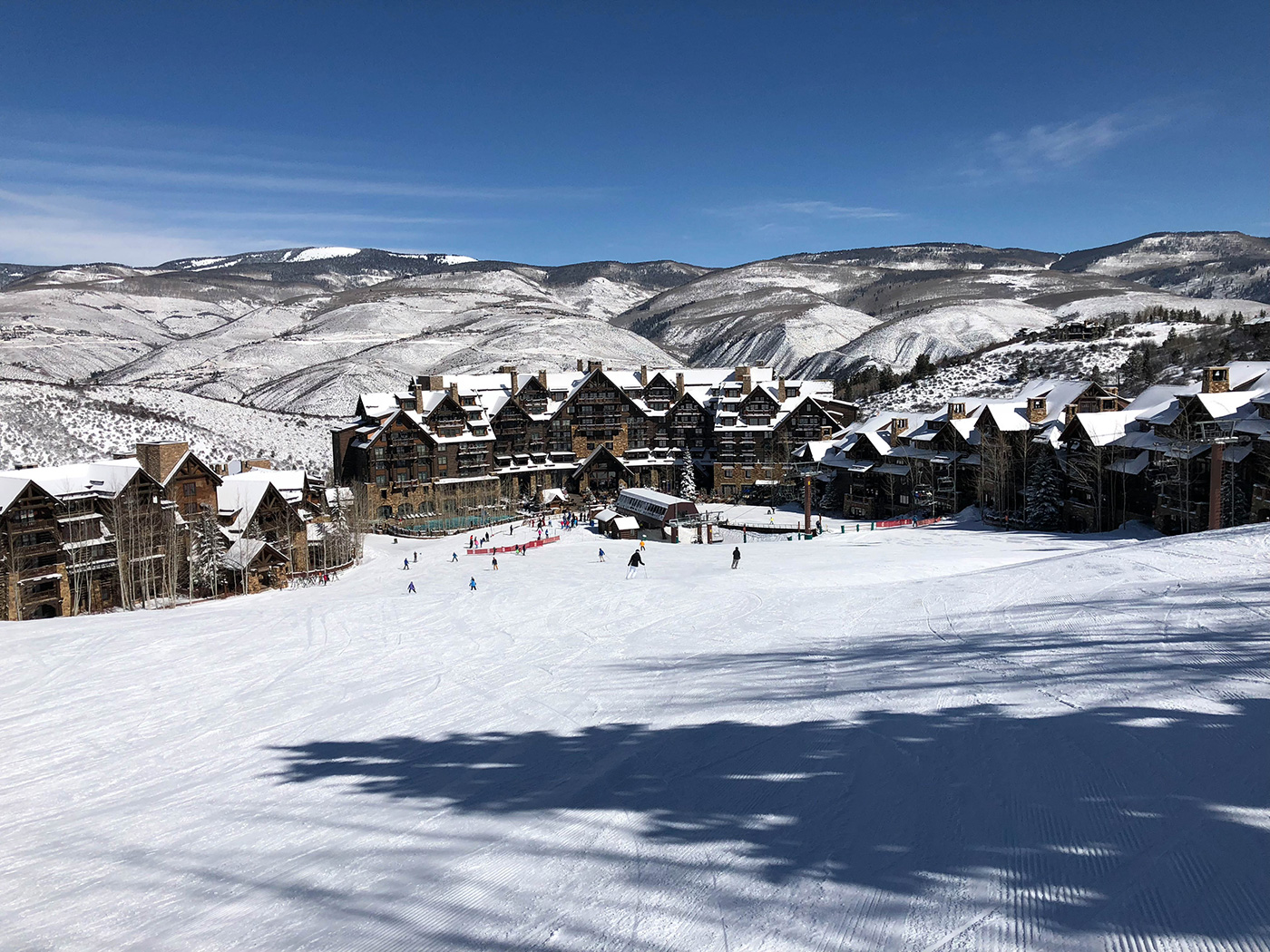 I shared a lift ride on the Bachelor Gulch Express with an older woman who admitted within seconds that she was a little “tipsy,” having just had a few drinks.

“This should be an interesting lift ride,” I thought to myself.

She turned out to be very interesting. She had spent the morning getting a massage at the Ritz-Carlton. She and her husband were retired and unlike typical snowbirds, who flee colder climes to warmer locales such as Florida or Arizona, they move to the mountains of Colorado in the winter for the skiing.

Noticing that I didn’t have a face mask on this frigid day, she critiqued my judgment.

“You’re just like my husband,” she said. “He doesn’t wear a face mask, either. For some reason men don’t think they need to wear face masks.”

(I ended up buying one a few days later. It turns out it makes single-digit windy days more comfortable.)

We departed ways once we reached the top of the lift, and I soon discovered some fun glades (Coyote Glade) to play in.

Eventually, I wandered back over to the main Beaver Creek area, and headed to the top of Grouse Mountain, which peaks at 10,688 feet. 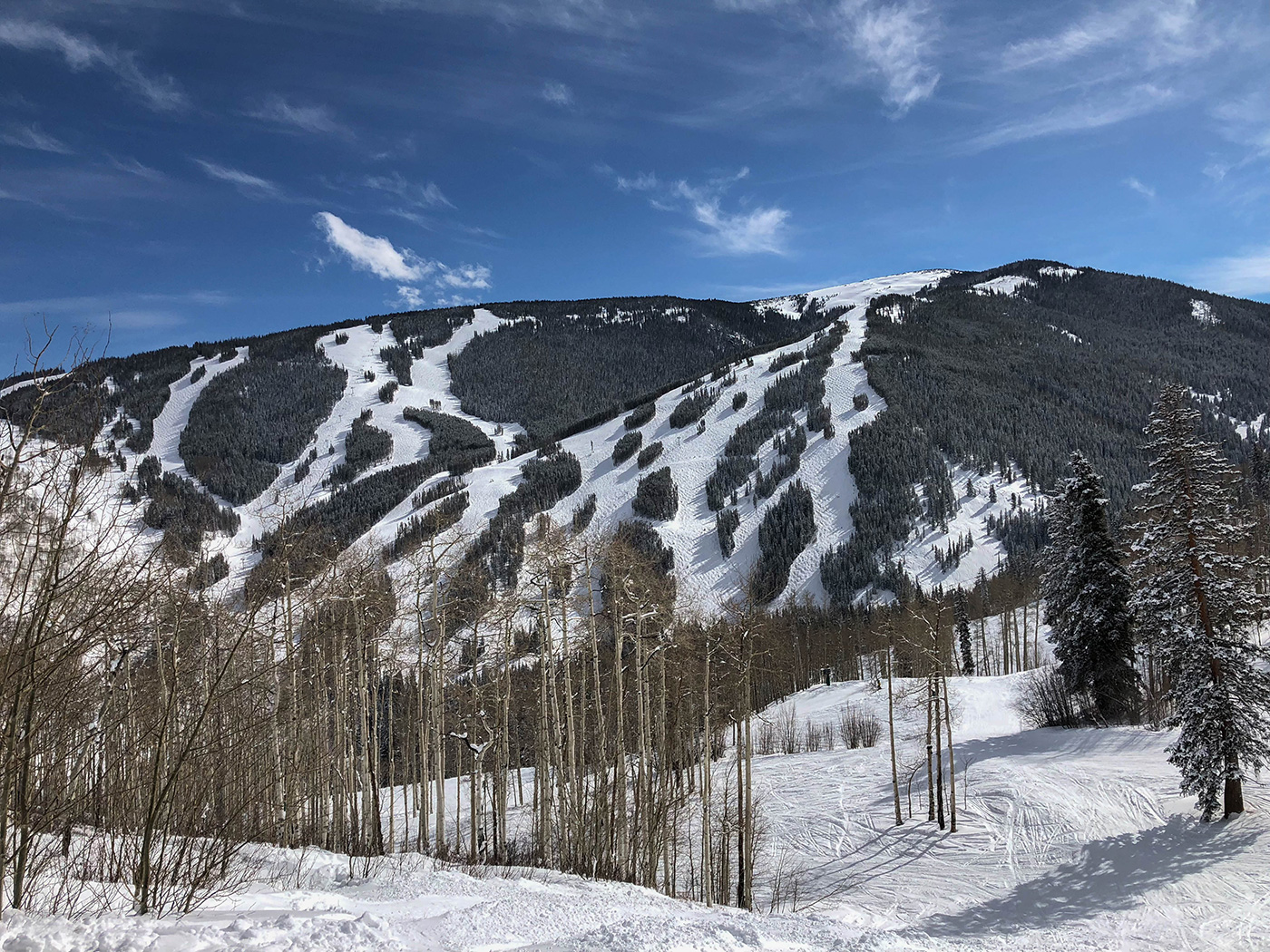 There are no beginner or intermediate ways down Grouse Mountain. Photo by M. Scott Smith.

While beginners have staked out their own terrain at the top of Beaver Creek Mountain, Grouse Mountain is just for the experts. The easiest paths down are black diamonds, and if that doesn’t challenge you enough, you’ll find double-blacks including challenging glades.

I picked a path down and enjoyed the challenge of fresh, ungroomed snow on steep terrain. I didn’t make it down in one continuous run — I had to stop along the way to take pictures, of course. (And maybe to rest my legs. Just a little.) 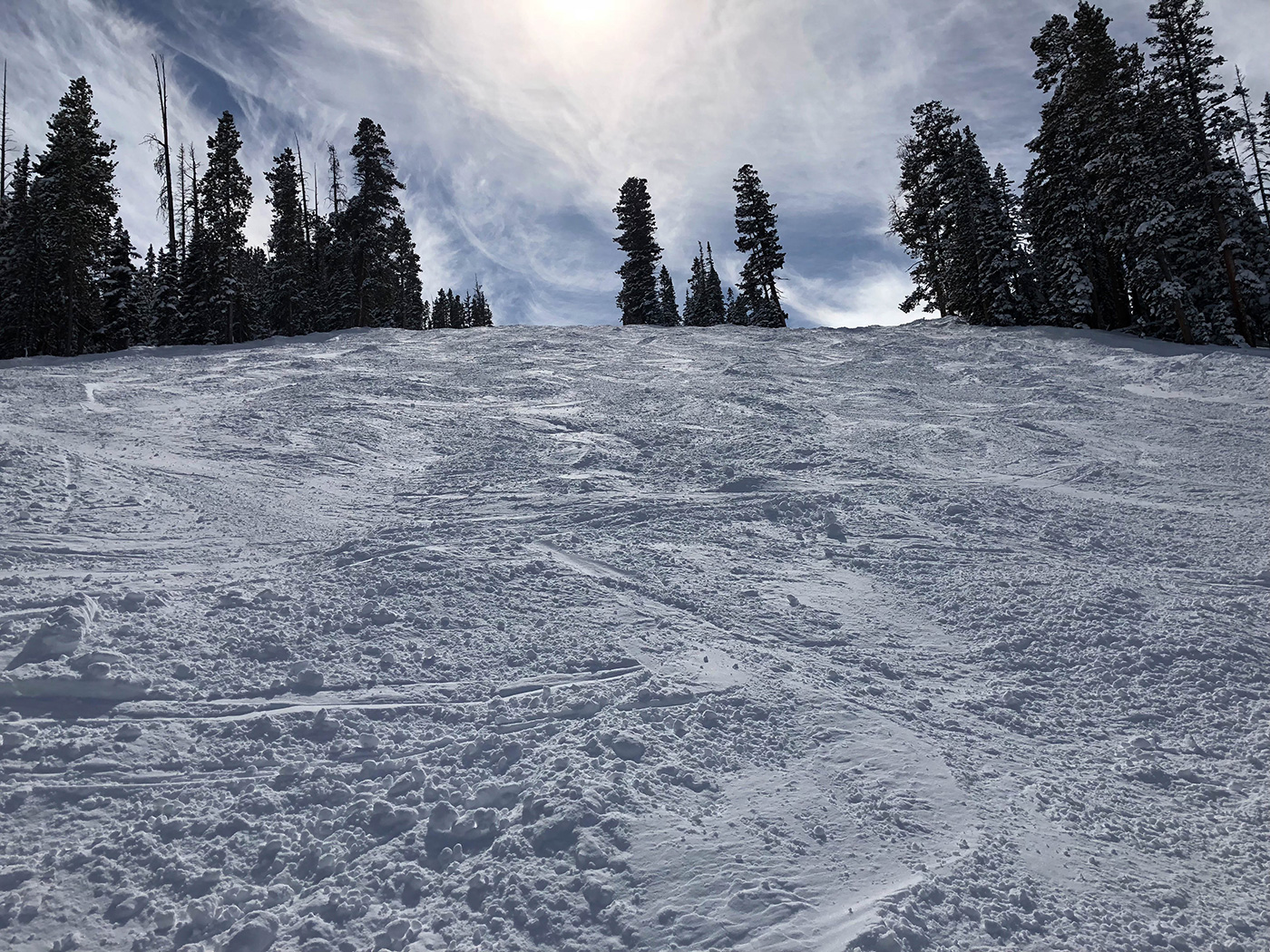 It was now getting towards the end of the day, so I worked my way back towards the main base. Looking at the trail map, I realized I had only just begun to scratch the surface of Beaver Creek. There are a lot of really interesting trails and areas to explore. I reckon I’ll be back. 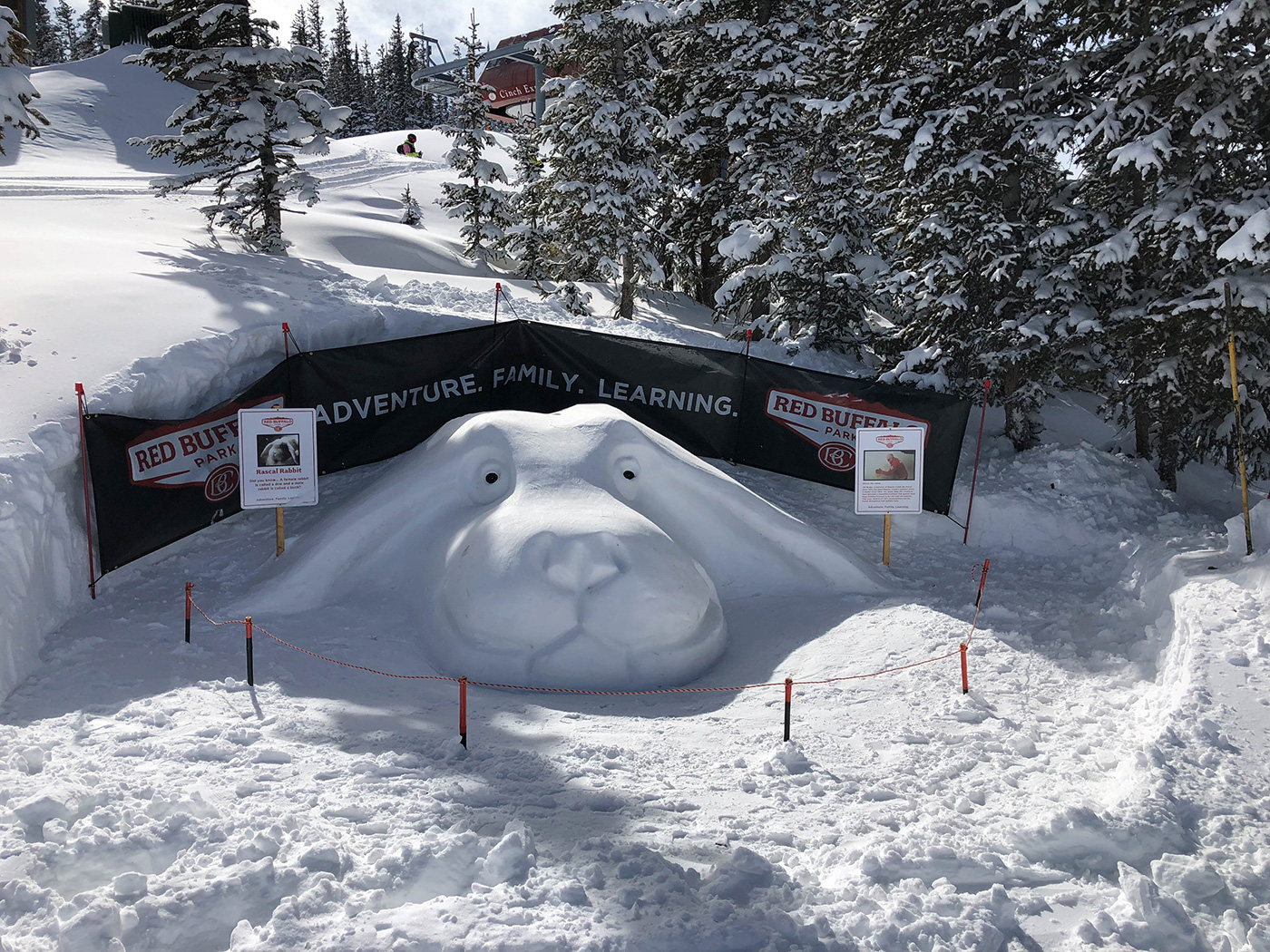 After skiing a day at Beaver Creek, I returned for a second day at Snowmass (already covered here), then it was time to bid adieu to Colorado and work my way towards Salt Lake City. But there was a stop I wanted to make along the way, trading my skis for hiking boots. I’ll cover that in the next Snow Trip report.

You forgot to mention the Cookies!  The BEV is my number one ski area. If I could just ski one area for the rest of my life it would be Beaver Creek. Arrowhead is the forgotten country. No one makes it all the way over there but if the snow is good the Blues on that side are lots of fun . Balchors Gulch has some hidden glades as well. Grouse is serious. Birds of Prey is downright nuts!! Even the Rose bowl is outstanding when the snow is good. Bev does get crowed on top as that is where the beginner terrain is. So best to explore like you did.

Inside tip - it only cost $25 to park in the heated underground lots on the mountain and they are free after 4pm.