Due to emerging ski travel commitments elsewhere, I realized in mid-January that President’s Weekend was going to be my last good window of opportunity to ski locally this season. Normally, I don’t ski on President’s Weekend to avoid one of the busiest weekends of the ski season, but I didn’t want to miss this opportunity to make tracks with friends. I hatched a plan employing my 50 years of Mid-Atlantic ski savvy to visit several fun mountains where I could still avoid long lift lines. My strategic ski area crowd avoidance rotation shaped up like this: February 16, 2018 (Friday) Timberline, WV; February 17 (Saturday) Canaan Valley Resort, WV; February 18 (Sunday) Laurel Mountain, PA; and February 19 (Monday) Seven Springs, PA.

The Friday before President’s Weekend was a normal weekday, so just about anywhere including Timberline was going to be light. Unfortunately, West Virginia got a couple inches of rain that day and I decided to sit-it-out. This turned out to be sort of a blessing in disguise because a friend had car trouble in the middle of nowhere (my apologies to Mt. Storm, WV) and I was available in the early afternoon to drive over and help him out of his fix. US Route 48 is a beautiful and fast highway, but a lonely place to break down with spotty cell phone service and sparse auto shops suitable for serious car repairs. I spent the rest of the day inside with friends drinking our sorrows away and wondering if that soggy Friday might mark not only the early demise of our friend’s Subaru, but the 2018 mid-Atlantic ski season as well?

Hope springs eternal and considering the preceding two-day monsoon and subsequent temperature drop, Saturday at Canaan Valley Resort (CVR) started off with surprisingly decent frozen granular ski conditions. There were about six top-to-bottom trails open and several other cross trails. A two-inch snow squall hit the mountain at 1:30 p.m. and it helped greatly. The parking lot at CVR was about 90% full on Saturday and the beginner carpet and chairlifts were very busy. I mostly avoided those areas and just as I’d hoped, the two chairlifts on the main hill had negligible lift lines all day. My friend with the car troubles and I were able to reconnect for some fun afternoon ski conditions together; score one point for the JimK President’s Weekend ski strategy. 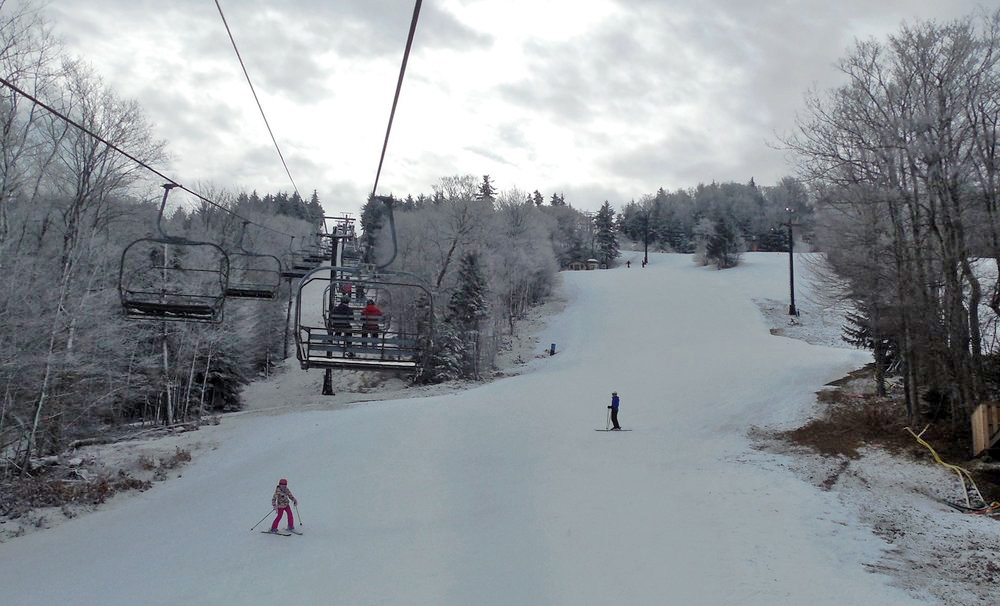 Even before the Saturday afternoon snow, Canaan Valley was skiing reasonably well. Photo by Jim Kenney. 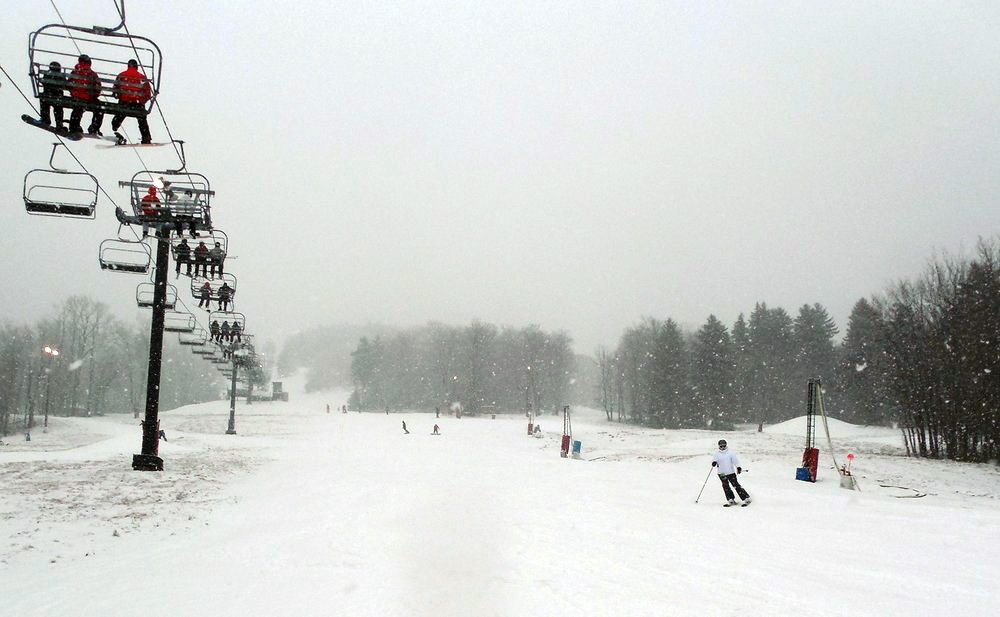 About six inches of snow fell during my drive on Saturday night to the Laurel Mountain/Ligonier area of western Pennsylvania. On Sunday morning when we pulled into a parking spot 20 yards from the Laurel Mountain lodge, those six inches had given the hill a nice resurfacing. The only problem was that just two trails survived the monsoon. Fortunately, they were a nice pairing: the long and easy blue square Broadway trail, and the challenging black diamond Wildcat trail. With the thought of post-season PTEX parties, we also skied several short connector runs and glades on thin natural snow. 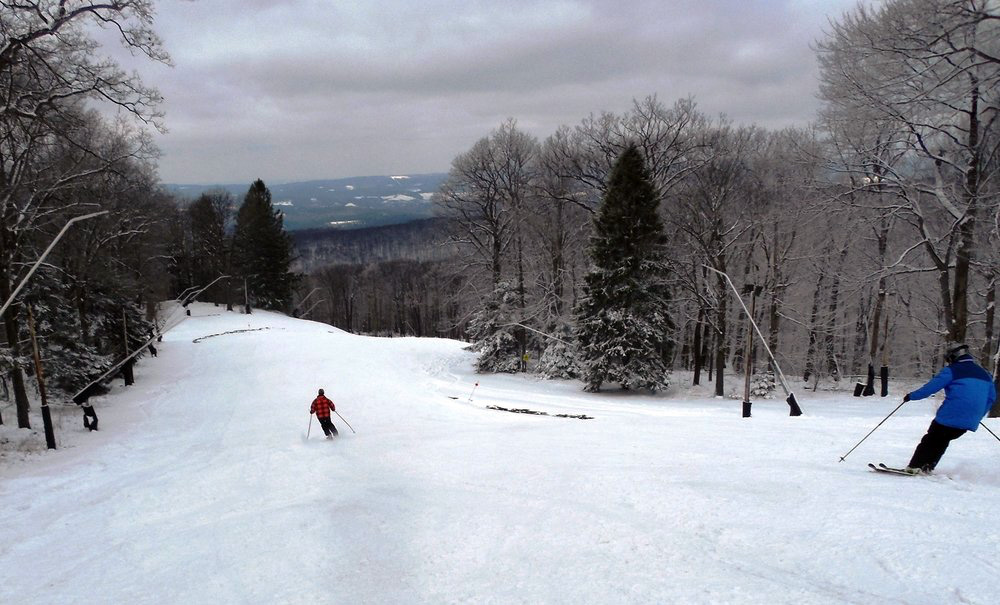 I enjoyed skiing Laurel Mountain with seven or eight friends on what turned out to be a real fine ski day. We had nice 45-degree weather with partial sunshine and Wildcat proved to be a heck of a workout. It went from velvet to bumpy over the course of the day. We alternated by using Broadway as a scenic recovery run. 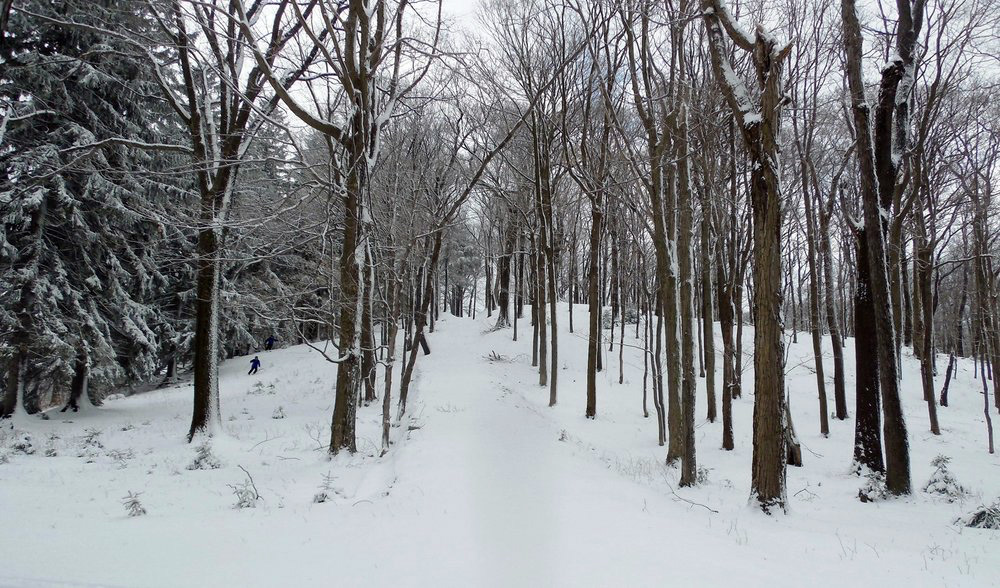 There is potential for excellent tree skiing at Laurel Mountain if Ullr will get off the stick. Photo by Jim Kenney. 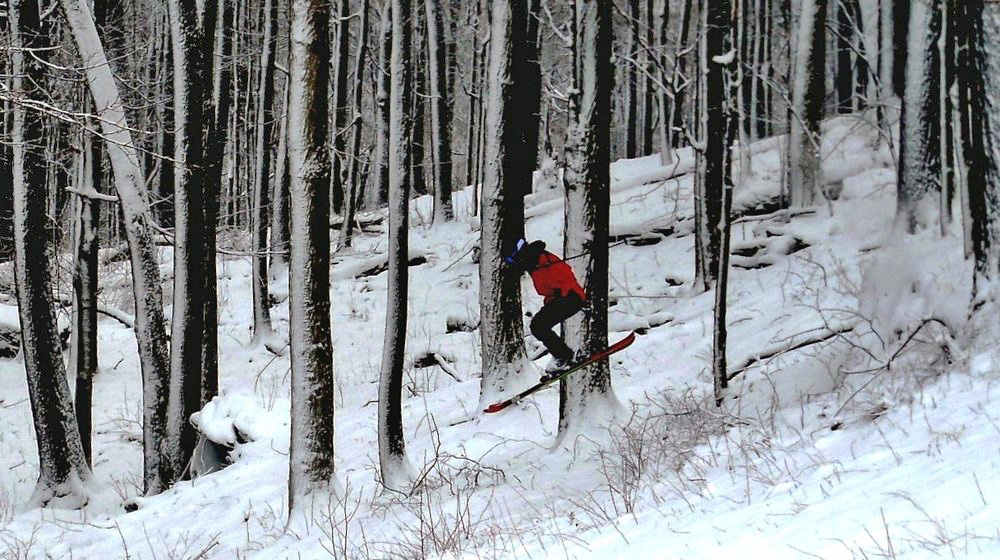 The lodge at Laurel has a really nice understated elegance to it and the moderate crowd upstairs left us with plenty of elbow room in the super scenic boot-up/brown bagger area. Downstairs the convivial bar and restaurant was full of folks who all seemed to be a friend of a friend. Laurel Mountain’s two year old fixed-grip quad chair (761-foot vertical) was ski-on all day and my battle cry was, “I’d rather ski two great trails, than a dozen lousy ones!” Is there a better way to share what might be one of the last prime snow days in the mid-Atlantic, than with a bunch of friends at the Laurel Highlands Legend? 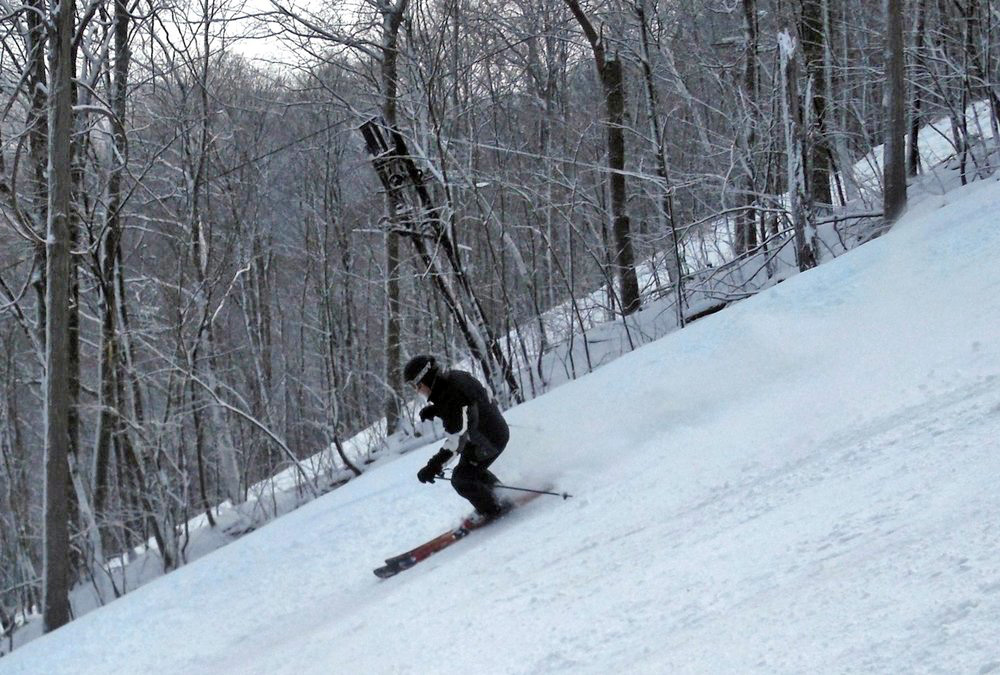 Lower Wildcat trail is one of the best black diamond runs in the Mid-Atlantic. Photo by Jim Kenney. 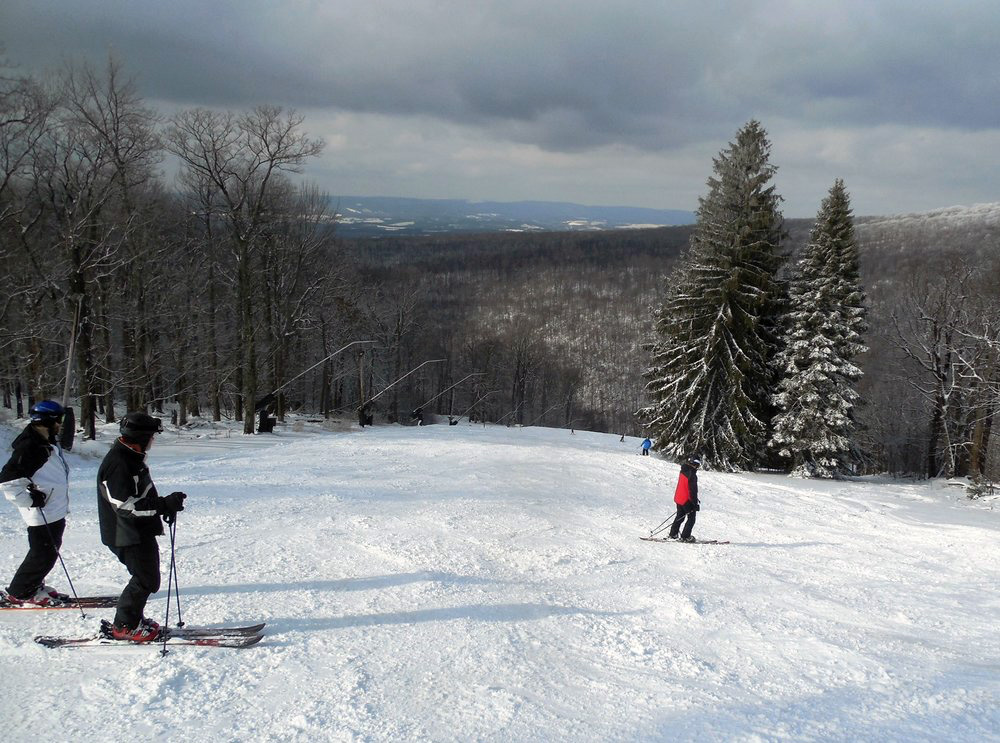 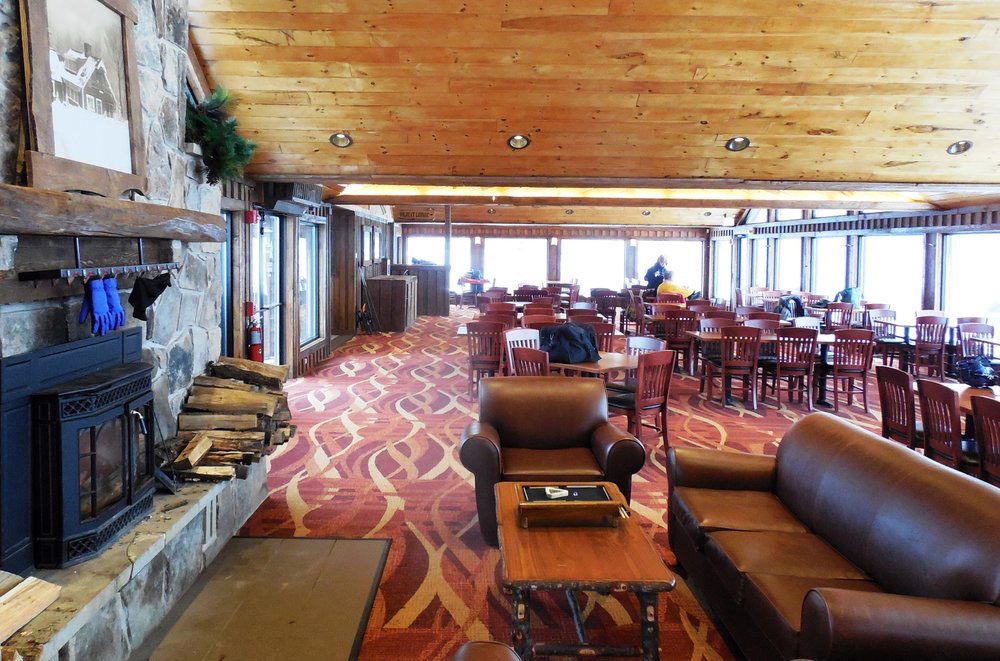 Set at 2,800 feet above sea level, the window-lined Laurel Mountain lodge features scenery as good as any in the Mid-Atlantic. Photo by Jim Kenney.

Then came Sunday, another one of those days that try skier’s souls. Me and a friend did our best to give Seven Springs a whirl Sunday morning, but about every 30 minutes we’d get soaked by a driving rain shower. We had to stop and go inside several times to dry off and wait out the cloudbursts and poor visibility. It was a shame because the snow was soft and fun and there were plenty of open, empty runs ready for the taking. Finally, after noontime the showers stopped, the air cleared, and us and a few other soggy souls got in a couple hours of fun schuss booming. 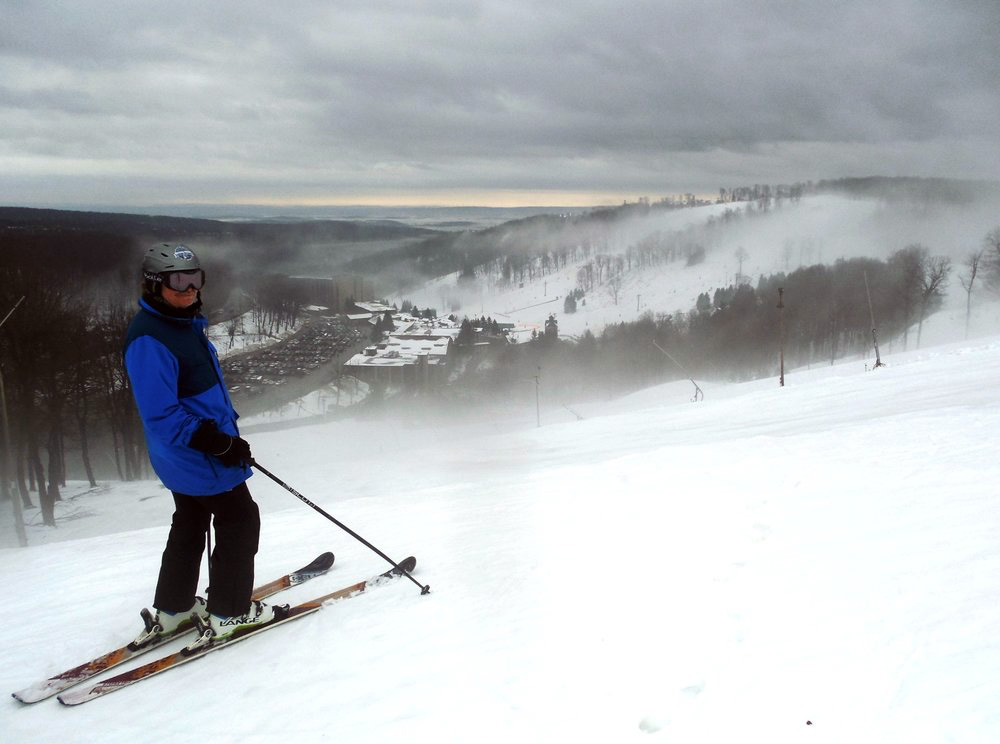 Looking down on The Spot Terrain Park and 22-foot Halfpipe at Seven Springs. Photo by Jim Kenney.

The twisty/turny tree-sheltered Lost Girl trail seemed to have the best snow on the mountain. We spent most of our time cruising the North Face and just letting the boards run. I saw my biggest lift line of the weekend at the Polar Bear Express six passenger chair around 2 p.m.: 12 people. The rain surely helped tamp-down the crowds, but from my experience the Monday of a holiday weekend is always the lightest day at high traffic ski resorts because many guests are worn out and busy preparing for the drive home. 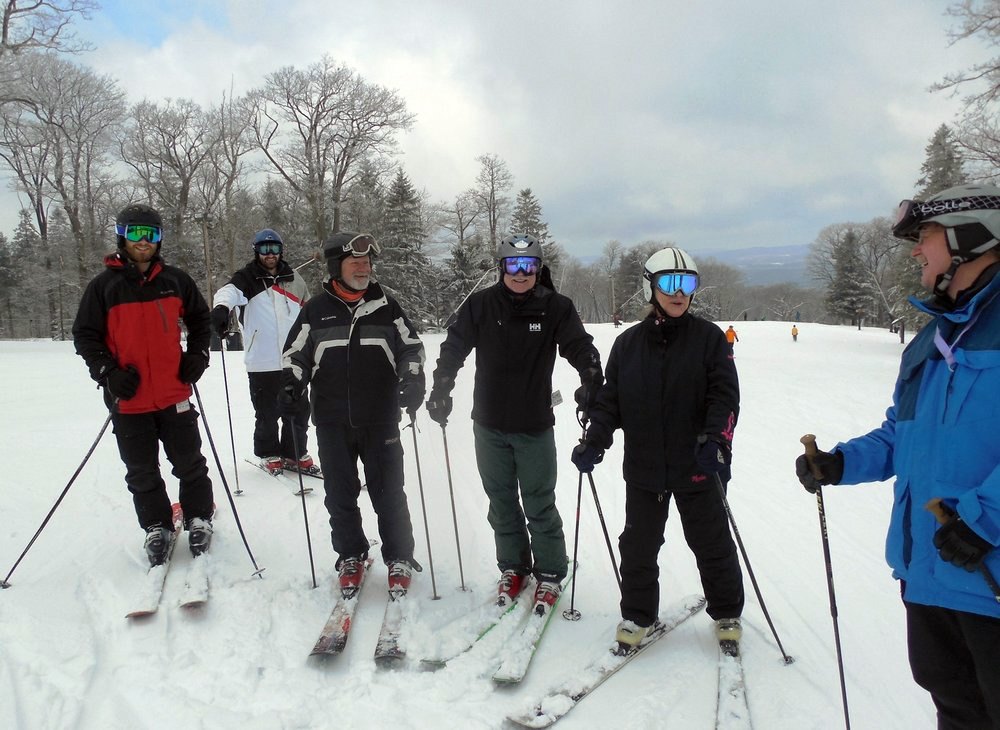 Final score: 2.5 for Jim’s President’s Weekend ski strategy, 1.5 for the Grinch that stole winter. I had a great time with friends at three different local resorts despite a mix of frozen and non-frozen precipitation. So many times over the years I’ve begun mid-Atlantic ski trips under dubious weather forecasts. Just seize the day people! Around here me and my skiing buddies live by the words of the late, great Jim Morrison: “the future’s uncertain and the end is always near.”