I had a great winter of skiing in 2019. I got in four fun ski days in the mid-Atlantic and then I headed to the western US for several months. I skied about 50 total days and visited ten major resorts in the Rockies. My exploits included skiing three great mountains that were new-to-me: Big Sky, Telluride, and Crested Butte. When all was said and done, I’d have to say Crested Butte, CO was my funnest discovery of 2019.

I skied Crested Butte for two days in late February in peak mid-season form. It was so fun and so well suited to my personal preferences that I went back again for three days in early April. Both times I stayed at the Grand Lodge Crested Butte. This surely enhanced my experience as the Grand Lodge is a very nice property and a flat 200 yard walk to the lifts. Besides the great snow conditions during both of my visits, what I really liked about Crested Butte was alternating between hard and easy runs all day in low to moderate crowds. 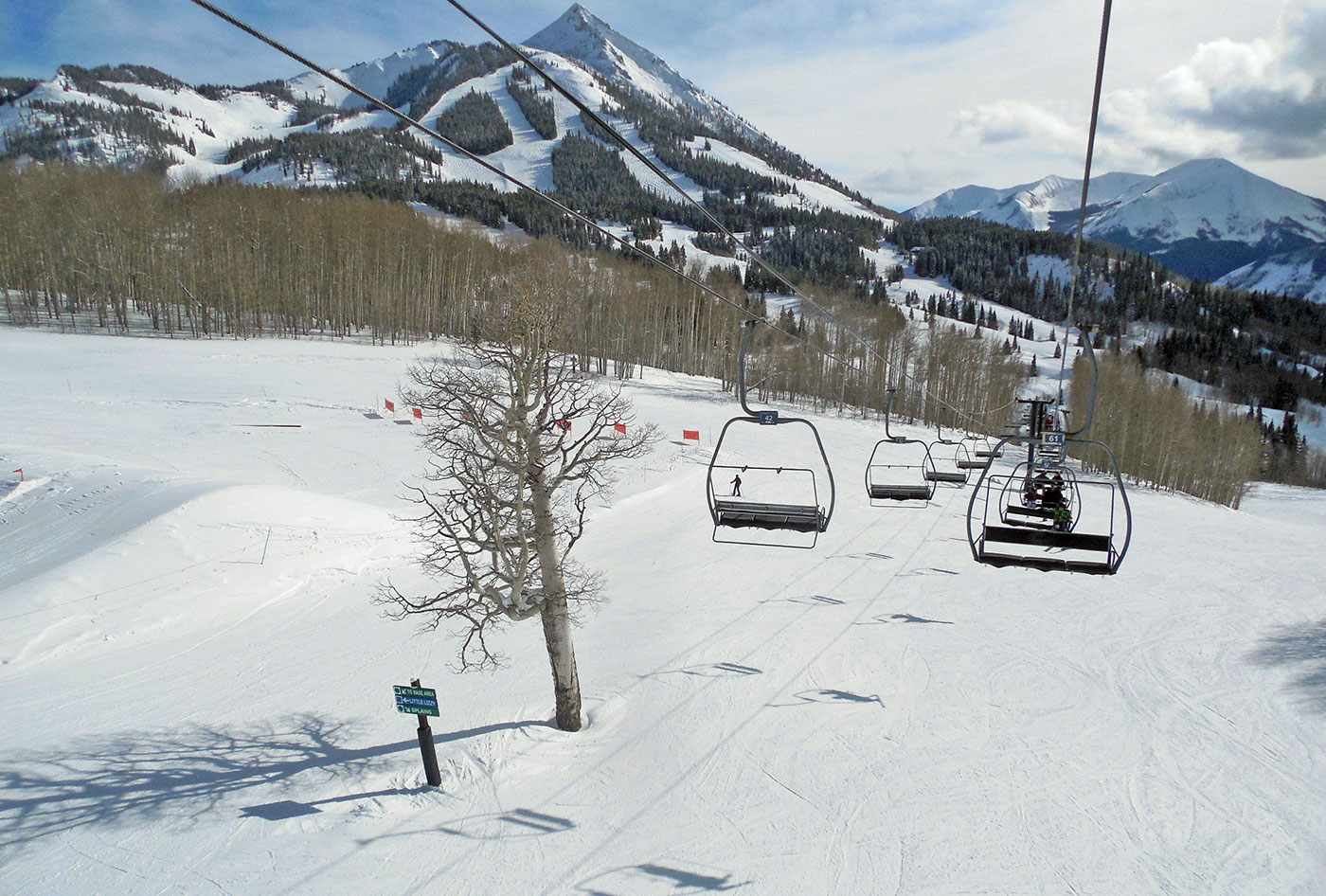 View of Crested Butte from Painter Boy lift with black diamonds in the background, intermediate groomers in the center, and easy terrain in the foreground. Photo by Jim Kenney.

When I first visited Crested Butte in February 2019 I reached it by driving over from Arapahoe Basin after a day of skiing there. Believe me, traveling on US 50 over 11,312-foot Monarch Pass at 5 p.m. in a snow squall is pretty intense! Once we got over the pass and began to approach the town of Gunnison, the high ranch land felt remote and bucolic. The whole region was blanketed in a deep snow pack and was stunningly beautiful in its isolation. 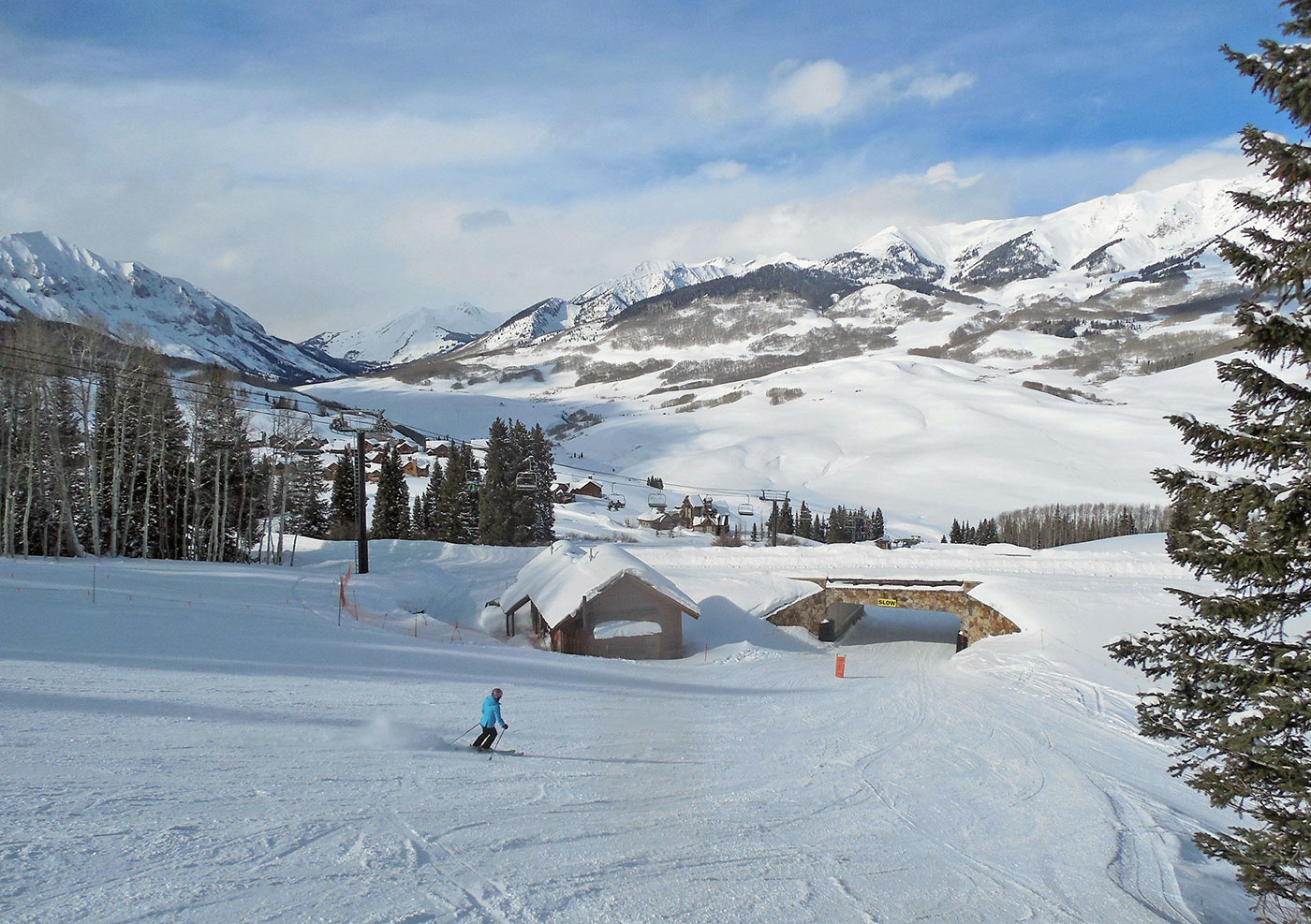 The view north beside the Prospect lift. Photo by Jim Kenney.

Gunnison is a neat mountain town with a population of about 6,000 that serves as the gateway to Crested Butte. Western Colorado University is located in Gunnison. It’s the alma mater of extreme skier Seth Morrison and a whole bunch of other crazies. The mountain resort at Crested Butte is another 30 miles north of Gunnison. About two miles before you get to the ski slopes you pass through the little town of Crested Butte, population ~1,500. I did not spend a lot of time there, but I enjoyed a fine breakfast in town at the Paradise Cafe. The town has an attractive western quaintness. 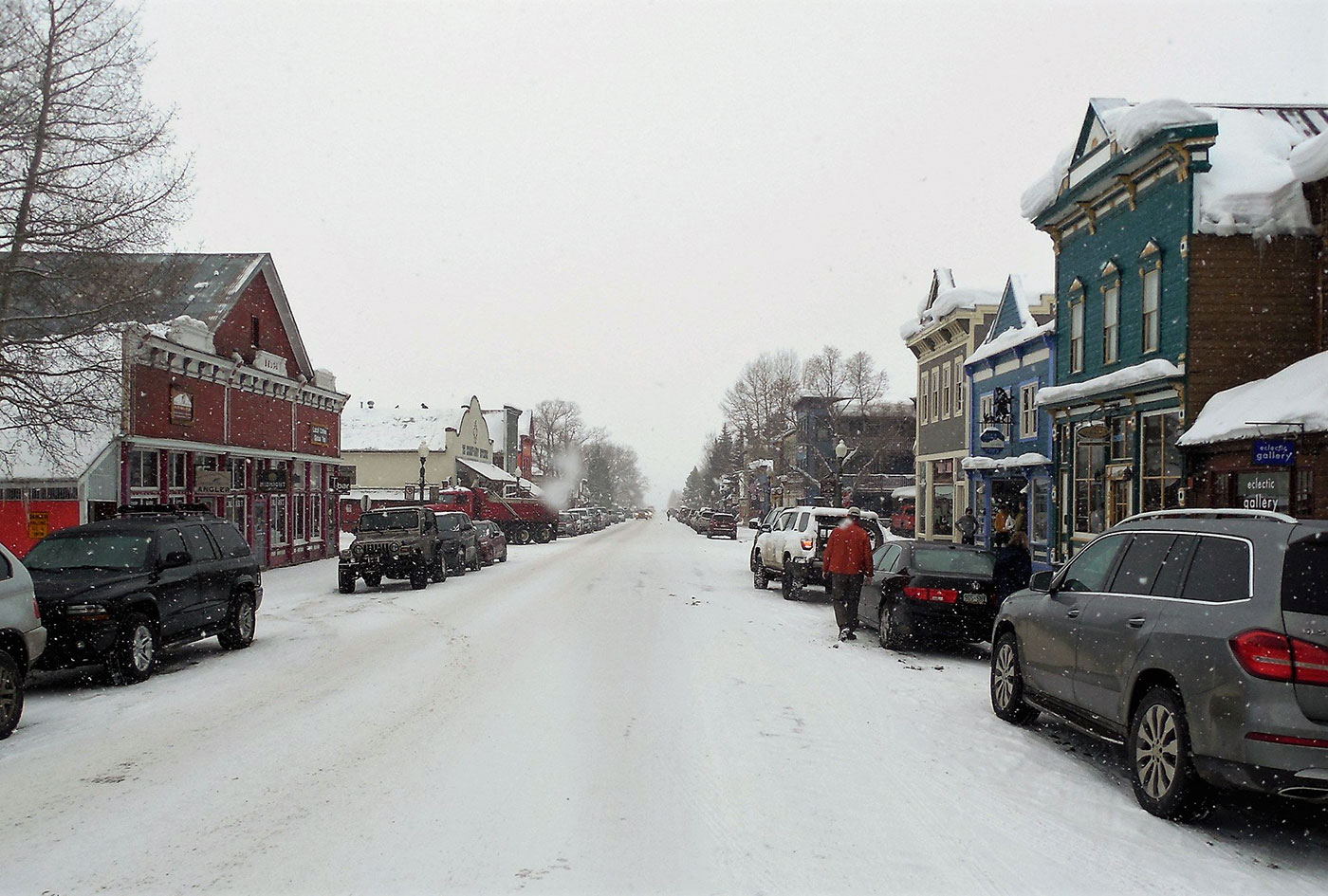 On my first day at Crested Butte I was skiing solo and immediately glommed onto a friendly local named Jerry. We skied about five early runs together. Jerry was quite a bit senior to me and skied beautifully. Jerry has been a Crested Butte homeowner for 24 years and through a few chairlift conversations I determined that he was generally pleased with the recent acquisition of the resort by Vail, hoping it will keep Crested Butte on solid financial footing. 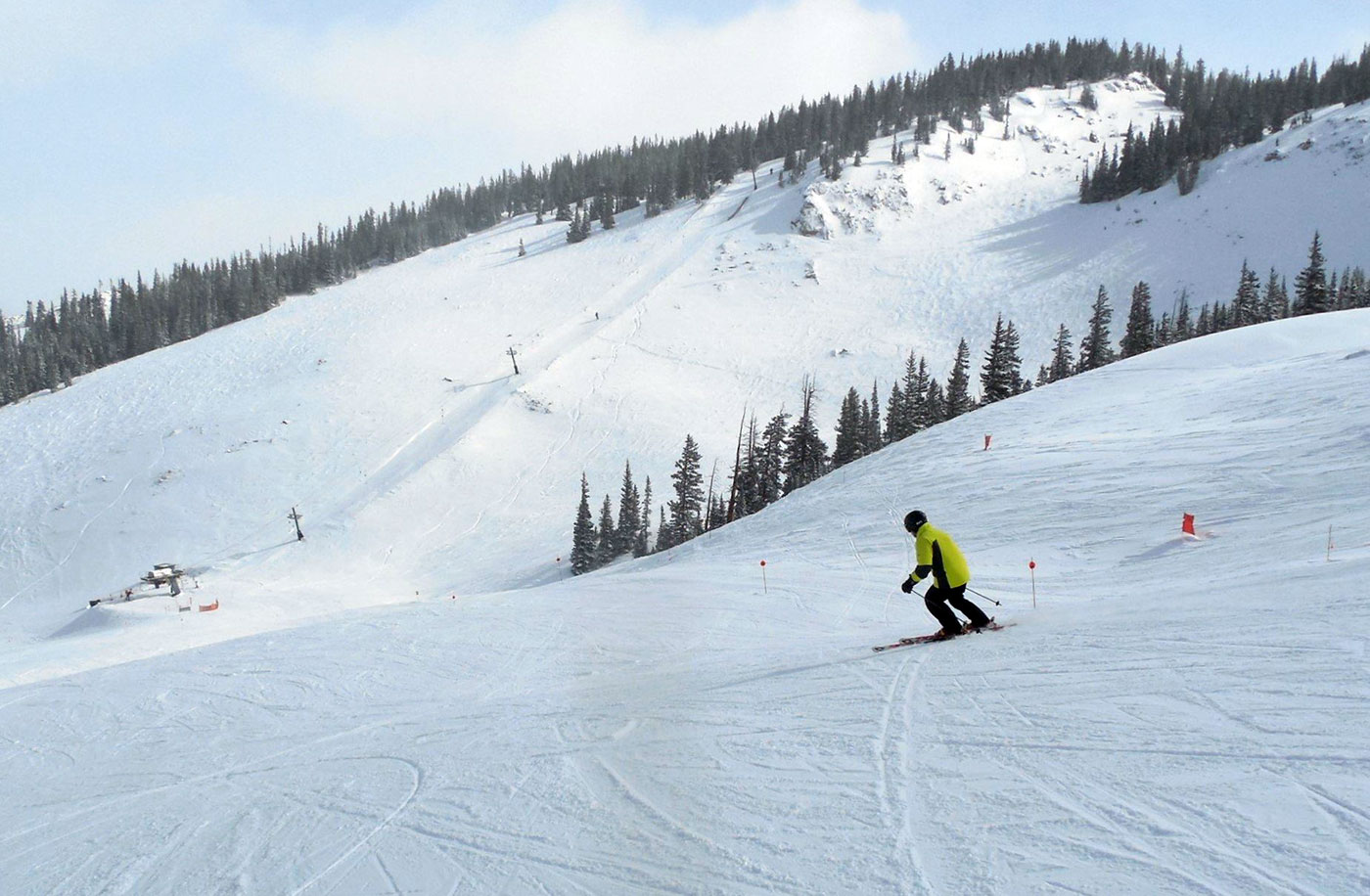 After Jerry and I parted ways I fell into an alternating pattern of challenging and relaxing skiing that I really enjoyed over the next two days. For example, after doing some warm-up laps with Jerry on green circle cruisers off the Red Lady chair, I took the Silver Queen express chair out of the base area and rode the High Lift t-bar for a very cool run down Rabbit Ears spine in the double black diamond Headwall area. 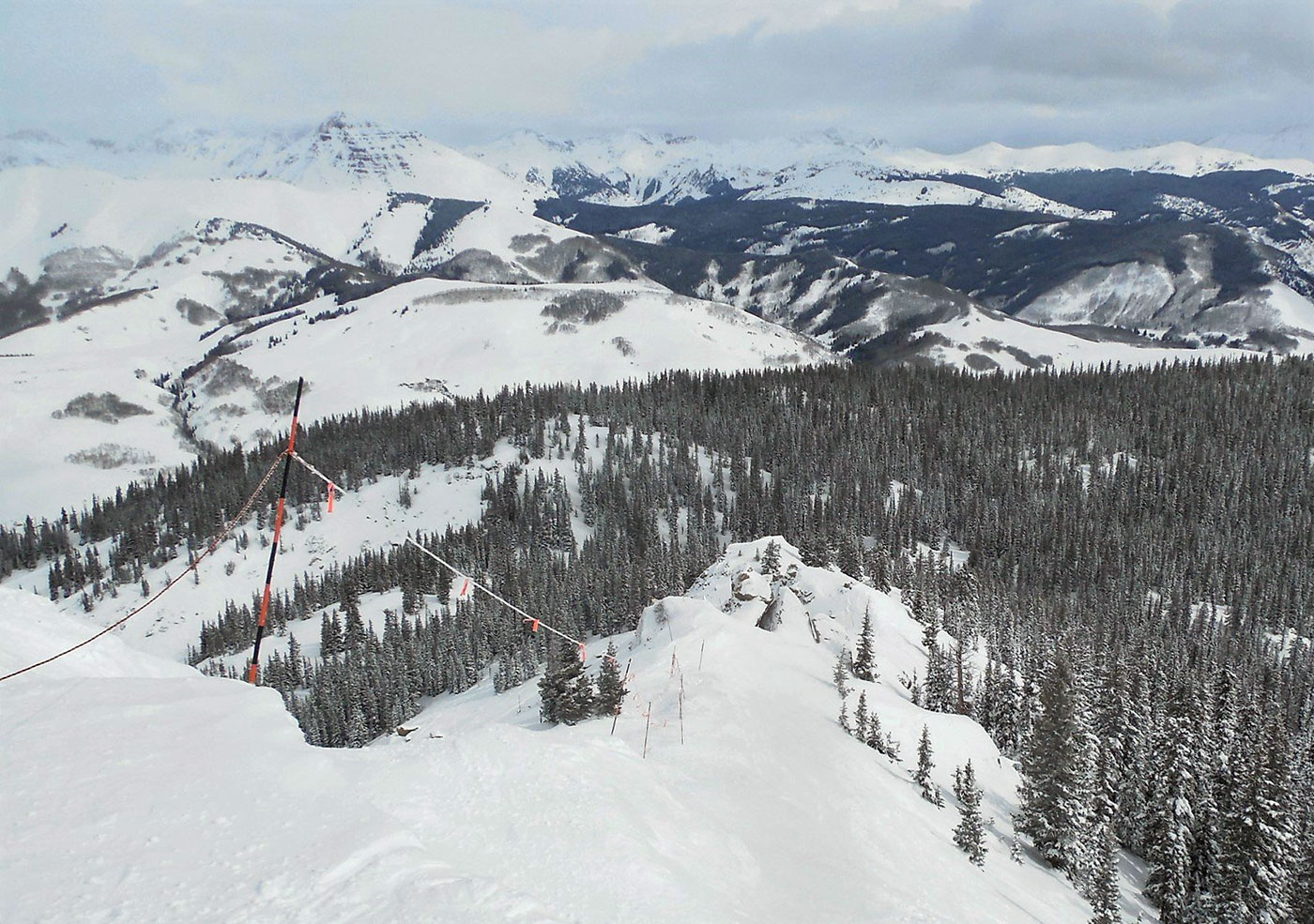 Later I enjoyed making relaxing turns on wide-open Paradise bowl, and then I took the North Face t-bar to make my way over to the double black diamond Phoenix Bowl. By that point, it felt really good to do some recuperative skiing on intermediate groomers off the nearby East River chair. On my second day I was hitting some of the long, steep chutes on the front (south face) of the mountain to the lookers right of the Silver Queen express chair. 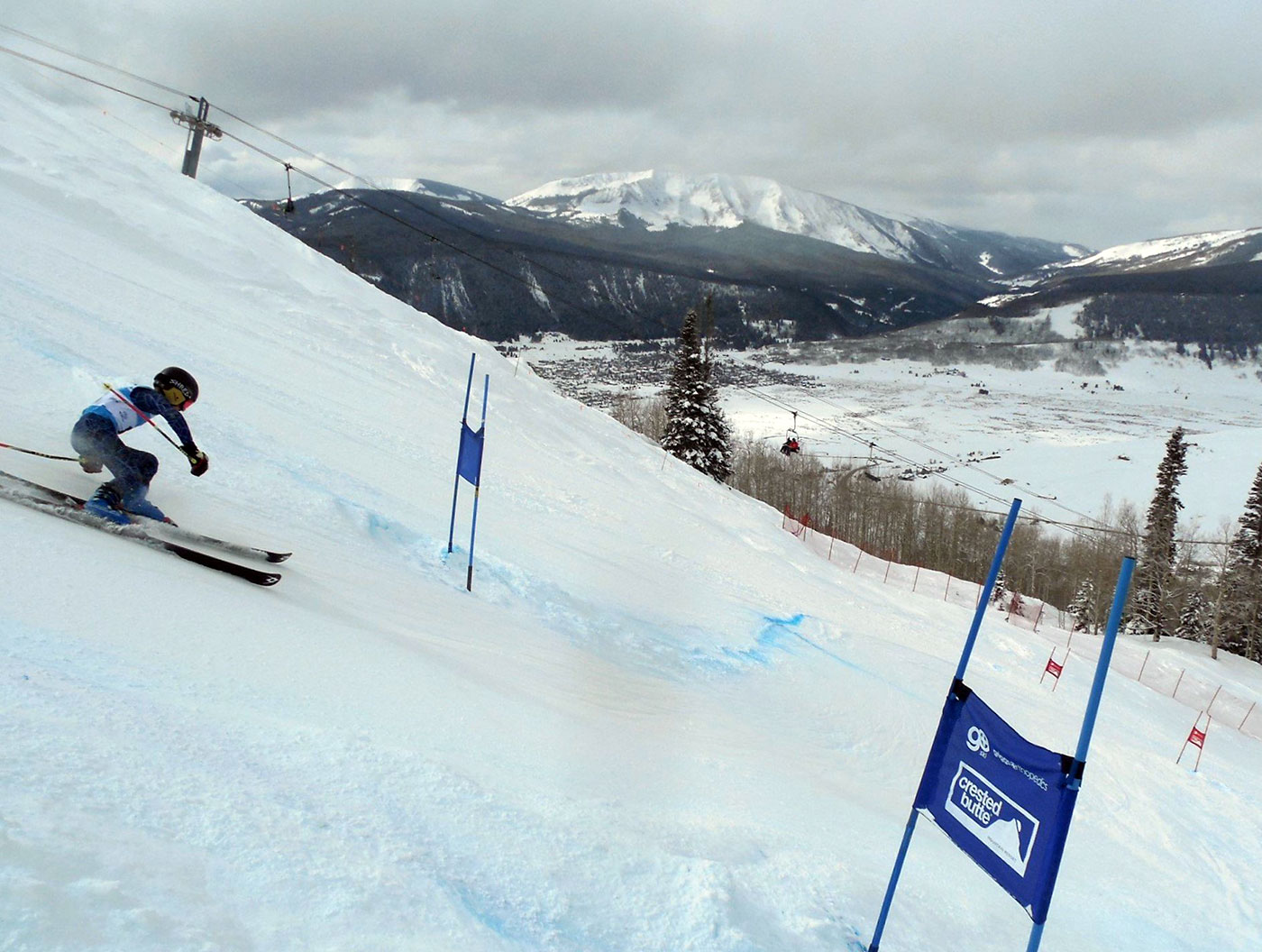 A young competitor in the Prater Cup junior (under age 14) ski races on International trail with the Silver Queen express chair and town of Crested Butte in background. Photo by Jim Kenney.

After two great February days at Crested Butte, my wife and I continued driving west for an extended stay with our son Vince in Salt Lake City. Over the next few weeks I enjoyed outstanding skiing in Utah and Montana, but I continued to mention to Vince how much I liked Crested Butte. In early April he came with my wife and I on a return trip to Colorado.

This time it was closing weekend at Crested Butte and I had even more fun than the first visit to the resort. The ski conditions were super for April with plenty of snowpack and bright sunshine. Closing weekend at Crested Butte was one big party as locals and students from Western Colorado University were out for fun and dressed like it was Mardi Gras. Also, with hard charging Vince along for the ride (he’s a PSIA Level 3 instructor), I had to UP my black diamond game and we skied some great stuff together. 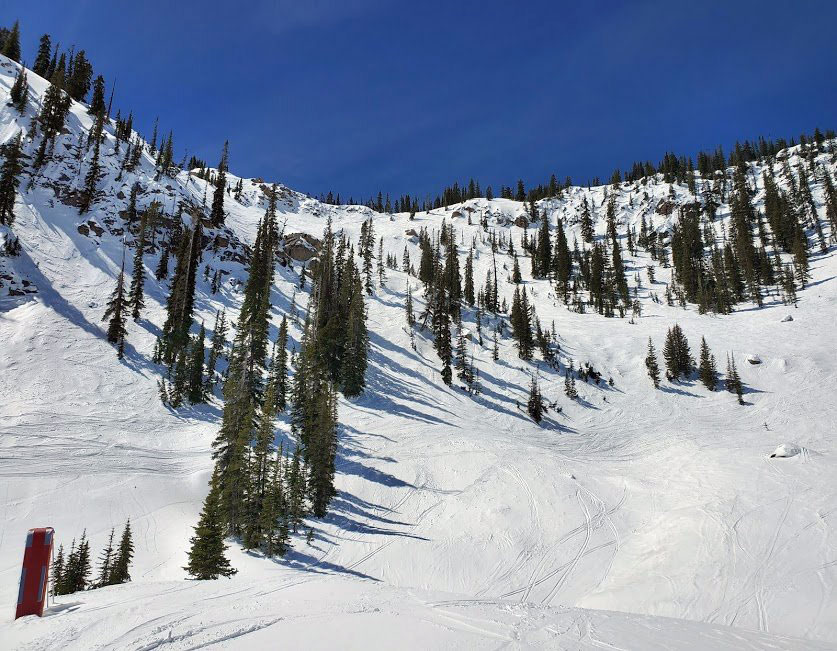 The North Face at Crested Butte. Photo by Jim Kenney.

I first skied the mountain with Vince on a quiet April Friday. It was a sunny day, although the off-piste terrain was firm in the morning so I stuck to various groomed runs off the Paradise and East River chairs. I connected with Vince around 11 a.m. when things were softening and we did back-to-back black diamond runs off the two expert surface lifts at Crested Butte, skiing the Headwall off the High Lift t-bar and the North Face slope off the North Face t-bar. 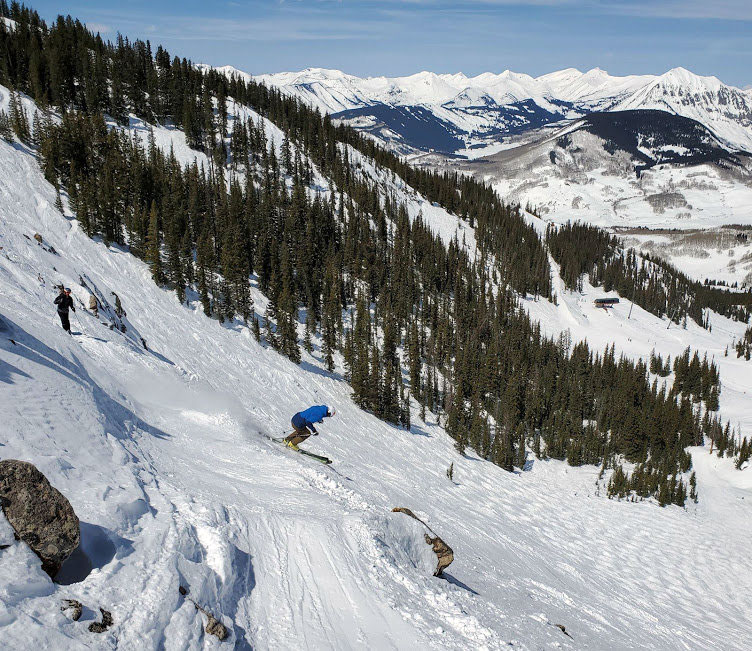 At 1:45 p.m. we took the High Lift t-bar again and when we saw other hikers, we spontaneously decided to climb the peak of Crested Butte at 12,162’. A younger, fitter person can do it in 10 minutes, but it’s rather steep and took me closer to 20. My wild guess is that the climb from the top of the t-bar to the summit entails about 350 vertical feet. It was worth the effort. The 360-degree views from the summit are stupendous. We shared the 20’ by 20’ pinnacle with about ten others, including some children. 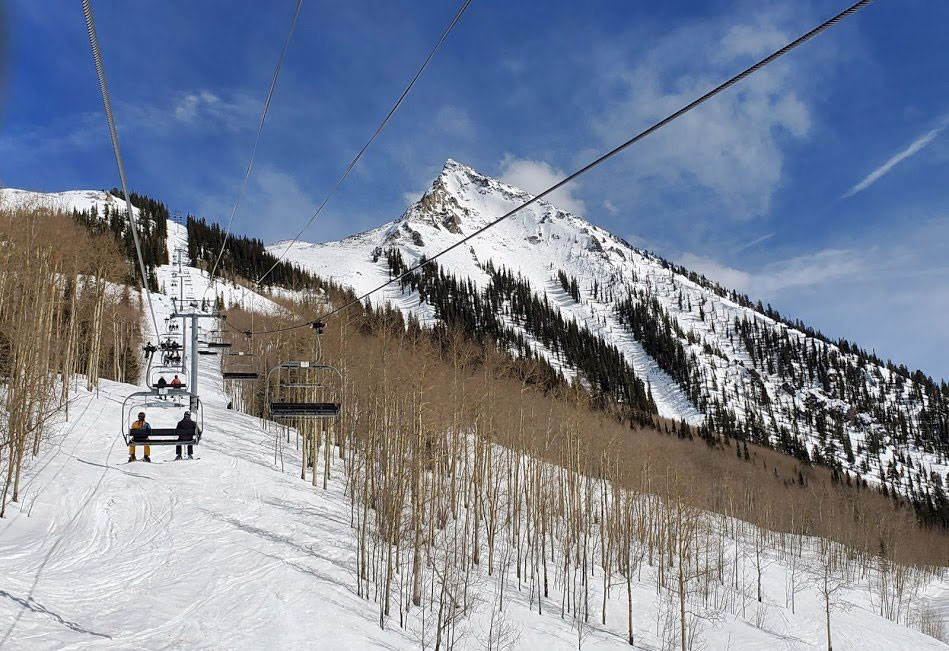 View of the summit from the Silver Queen express chair. Photo by Jim Kenney.

After we hung out for ten minutes on the summit, Vince led me down to the Banana High Entrance. This is a long and somewhat sketchy traverse that leads to some classic chutes on the front/south face of the summit such as Peel, Banana, and Funnel. There are a lot of cliffy sections and the whole area is super picturesque. A family skied by me as I was gingerly making my way along the Banana High Entrance traverse. Their group included a 6-year-old wearing a baby shark outfit. I smiled and kept moving so I wouldn’t be too badly shamed by the baby shark. 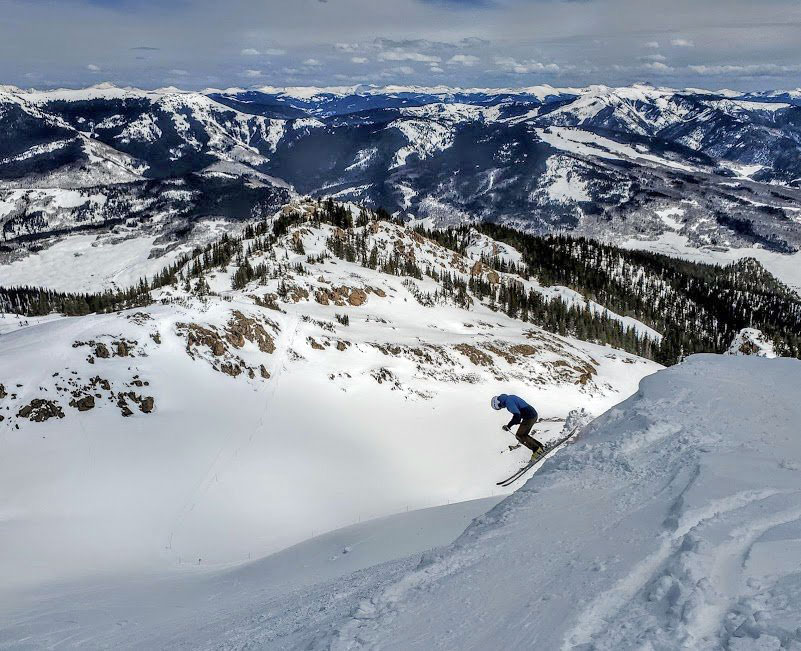 Vince and I would eventually ski most of the black diamond chutes on the front face below the summit, but for our run from the very pinnacle we took the traverse all the way to Funnel. Funnel chute chokes down to a narrow area called Deep Throat and there’s a huge rock cliff that borders the entire right side of the run. This will stand as one of the most memorable runs of my ski career and consisted of nearly 3000 continuous vertical feet of double black diamond terrain. 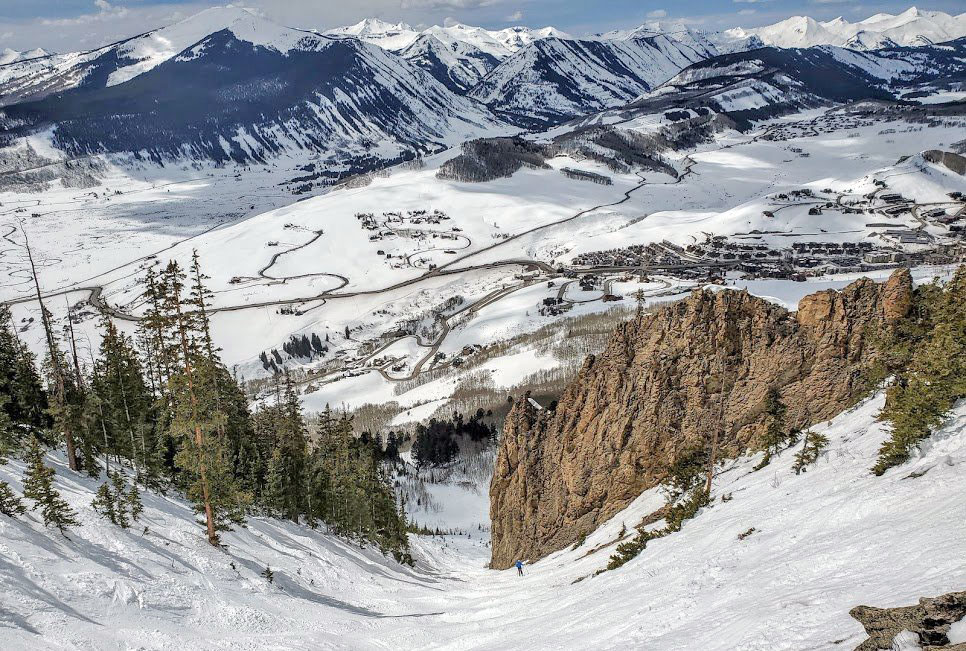 Saturday was another mild day and highlighted by the annual closing weekend Pond Skim. Dozens of skiers and boarders took the dare. My wife and I had a great time observing the afternoon festivities for more than an hour with a large and high spirited crowd. Two time World Extreme Skiing Champion Wendy Fisher was one of the judges. It was a fun event enjoyed by youngsters, old-timers, locals, and visitors. 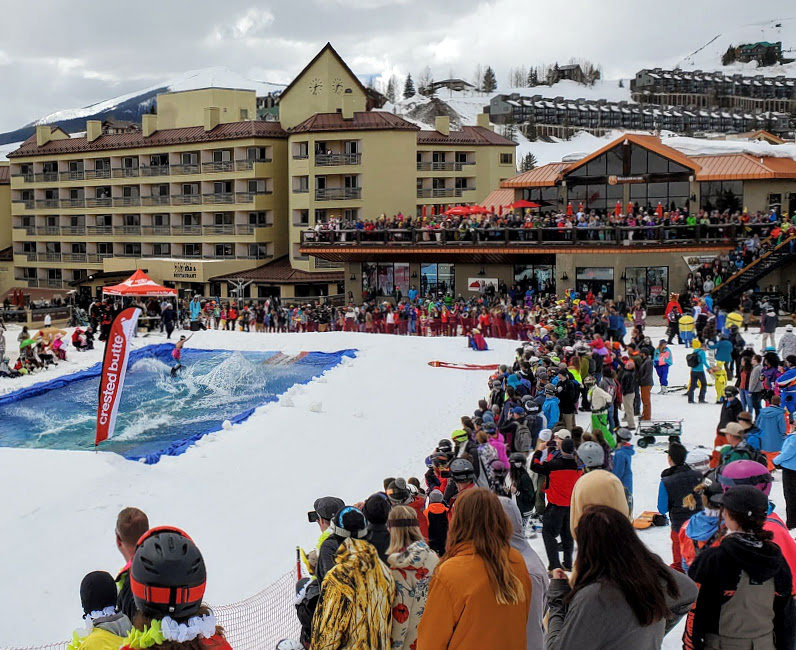 Sunday, April 7th was a beautiful spring day and the season finale for Crested Butte. The entire mountain featured soft and friendly snow conditions for most of the day. Vince and I skied all over. The vast majority of Crested Butte’s black diamond terrain was still open.

There were so many skiers/boarders dressed in elaborate animal costumes that it looked like there’d been a breakout at the local zoo. We saw an Uncle Sam look-alike and numerous evil-looking bearded pixies in tutus. I really enjoyed the friendly locals at Crested Butte and it was obvious a big contingent of fun-loving students from nearby Western Colorado University were out to take advantage of a beautiful closing weekend. 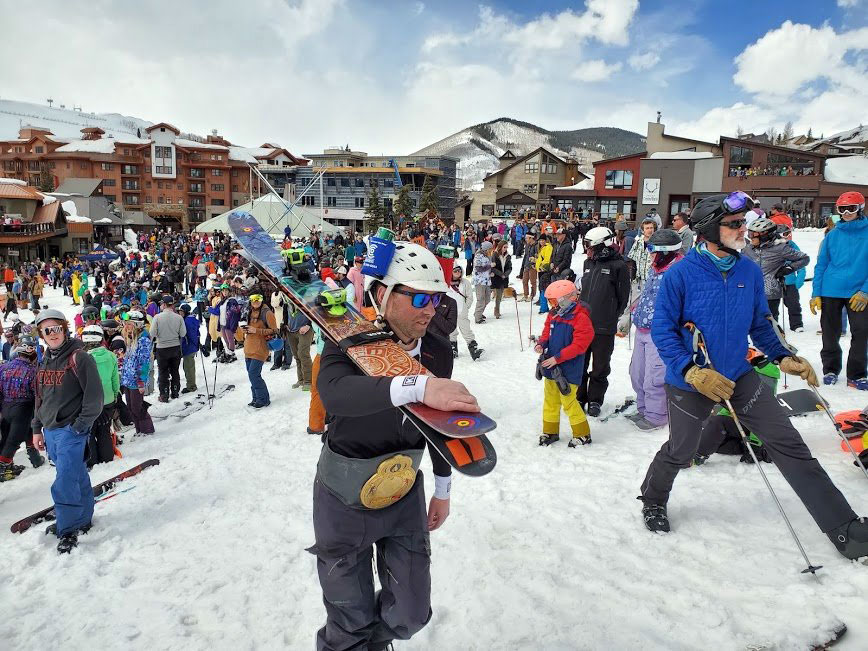 CB locals know how to unwind. Photo by Jim Kenney.

If you recall, this was Final Four weekend and I donned a University of Virginia sweatshirt for the occasion. It brought out many responses from other skiers/riders and I made friends in a remote section of Phoenix Bowl with a long lost Virginian from Richmond. He had wisely migrated to Crested Butte many years before. 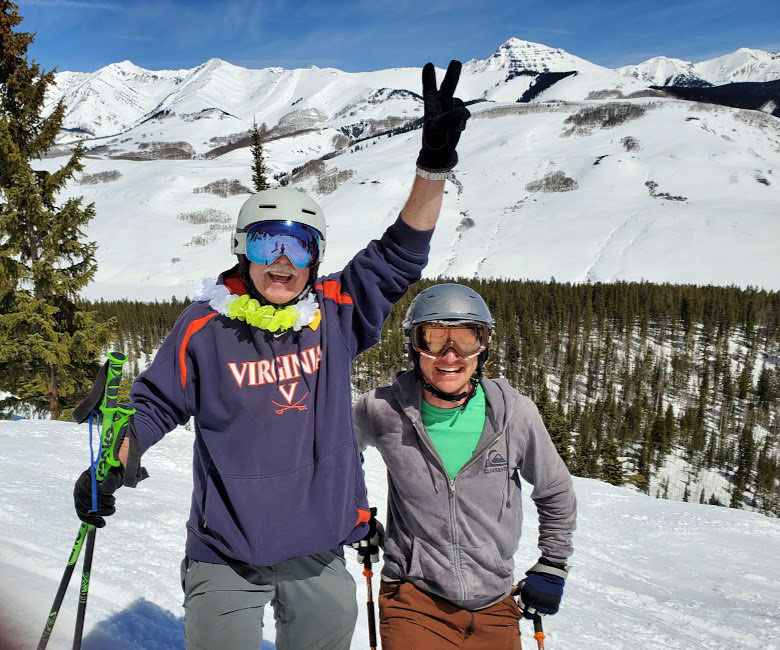 In a nutshell, it was the people, the environment, and the terrain that made Crested Butte so fun for me. I really liked that the place was not mobbed for either of my visits. During my second visit over closing weekend the locals were having an absolute blast. I loved the youthful vibe that the college kids from Western Colorado University brought to the slopes. 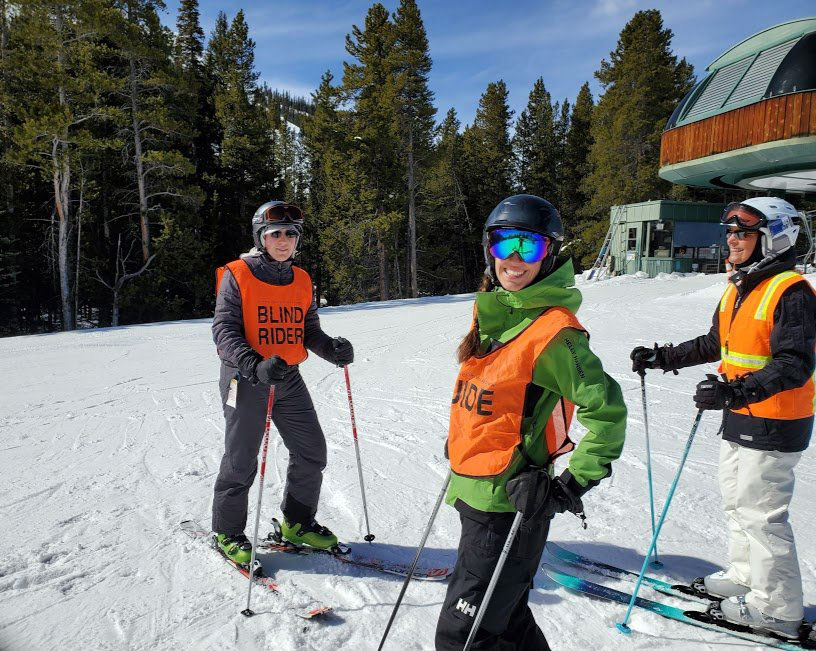 Everybody has a good time at Crested Butte. Photo by Jim Kenney.

The same reason I had never been to CB before, its remoteness and being slightly off the Interstate 70 beaten path, is one of the nice reasons I liked it. When you arrrive at the resort it has a beautiful end-of-the-ski-world feeling. The views from many ski trails remain largely unscarred by development. How the area evolves under the Vail Resorts umbrella is still to be determined, but for now the whole region looks unspoilt and gorgeous, especially in a year when the landscape is covered in a brilliant blanket of white. 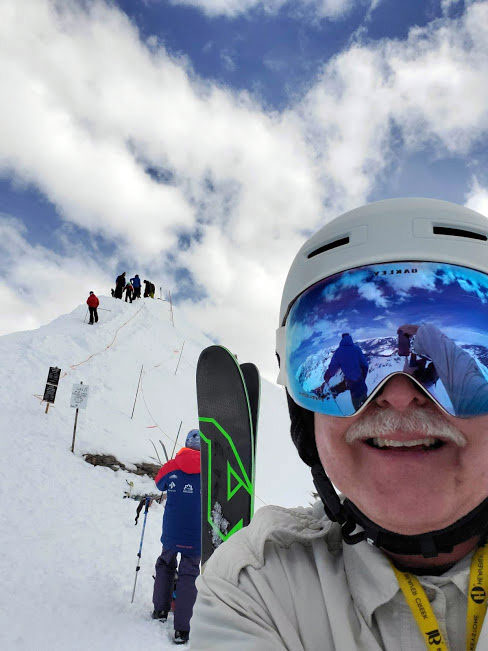 Given the superb conditions I experienced last winter, it’s hard for me to think of a better ski destination than Crested Butte for a mixed ability group of easy going intermediates and hard charging experts. The groomers are wide, scenic, and just right for relaxed skiing. The double black diamonds are copious, accessible, and exacting. For snowriders who like snails AND oysters, the terrain at Crested Butte represents the perfect discovery.

Nice article Jim. If one were to fly to CB from the DC area, what would be the best way to go?

Thanks Jim.  Brings back great memories of when my son and I went there 20 years ago.

John, Gunnison would be the nearest airport to Crested Butte (approx 30 miles) that is served by major airlines.  And I suspect you could catch a shuttle ride from there to the resort and avoid a car rental.  From Denver or Colorado Springs airports the drive to Crested Butte would be approx 5 and 4 hours respectively.

Thanks for sharing Jim.

I have a grand total of one day at Crested Butte, and like you I enjoyed it.

The most interesting part of the trip was that I stayed in Gunnison. First thing in the morning the temp was -46F degrees. That's the coldest temp I've ever experienced. I was worried about whther or not I had enough antifreeze in the truck (I did).

Drove to the hill where the temp was 30 degrees warmer.

Yes, the valleys do get colder than the surrounding terrain.

Other than Gunnison, other airports that are a shorter drive than the Springs or Denver would be Montrose (about 2.5 hours) or Telluride (about 4 hours).