On Friday, December 18, 2020, West Virginia’s Timberline Mountain ski area opened for the season looking quite different than it did the last time it was open. In late 2019, Timberline was purchased by the owners of Perfect North Slopes, a small, family-run ski area in Indiana. Although Timberline did not open for the 2019-2020 winter season, the new owners spent the past year undertaking an aggressive project to renovate the ski area — replacing existing chairlifts, upgrading snowmaking, and beginning renovations to the lodge. (DCSki provided an extensive look at the Renaissance of Timberline earlier this year.) The fruits of this effort were on display on December 18 as Mid-Atlantic skiers were able to experience the “new” Timberline for the first time. 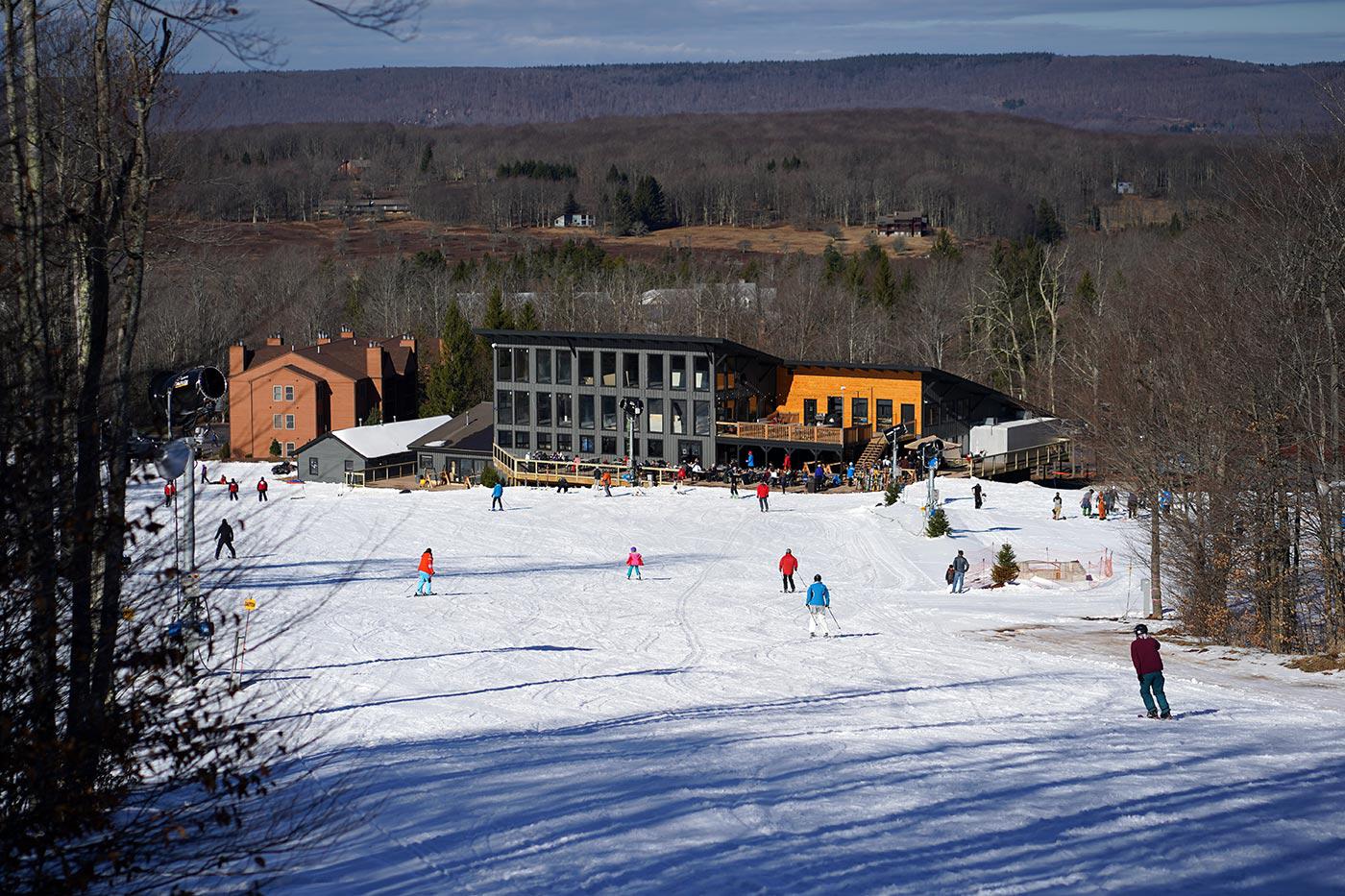 “The first chair went up at 10 a.m. with skiers eagerly awaiting their swift ride to the top of Timberline Mountain,” he added.

Several DCSki readers were among the first to ski at the new Timberline Mountain, and shared their thoughts.

The new 6-pack high-speed lift “truly is a game changer in many ways,” said one long-time Timberline skier. “First, it allows you to get what would have been a day’s worth of skiing at the old Timberline done in a few short hours. Whereas the old Thunderdraft averaged 15 minutes with stops on busy weekends, the new high-speed whisks you up to the mountain in 5 minutes flat with no mid-station stops and few other stoppages due to the easy loading process and the detachable nature of the lift,” he said.

“Even with the COVID loading restrictions on a moderately busy Saturday, there were few lines, even during peak periods,” he added. “Padded seating and gentle loading and unloading make the ride seem more ‘Lexus’ than the old, hard tail mountain bike experience of Thunderdraft.” 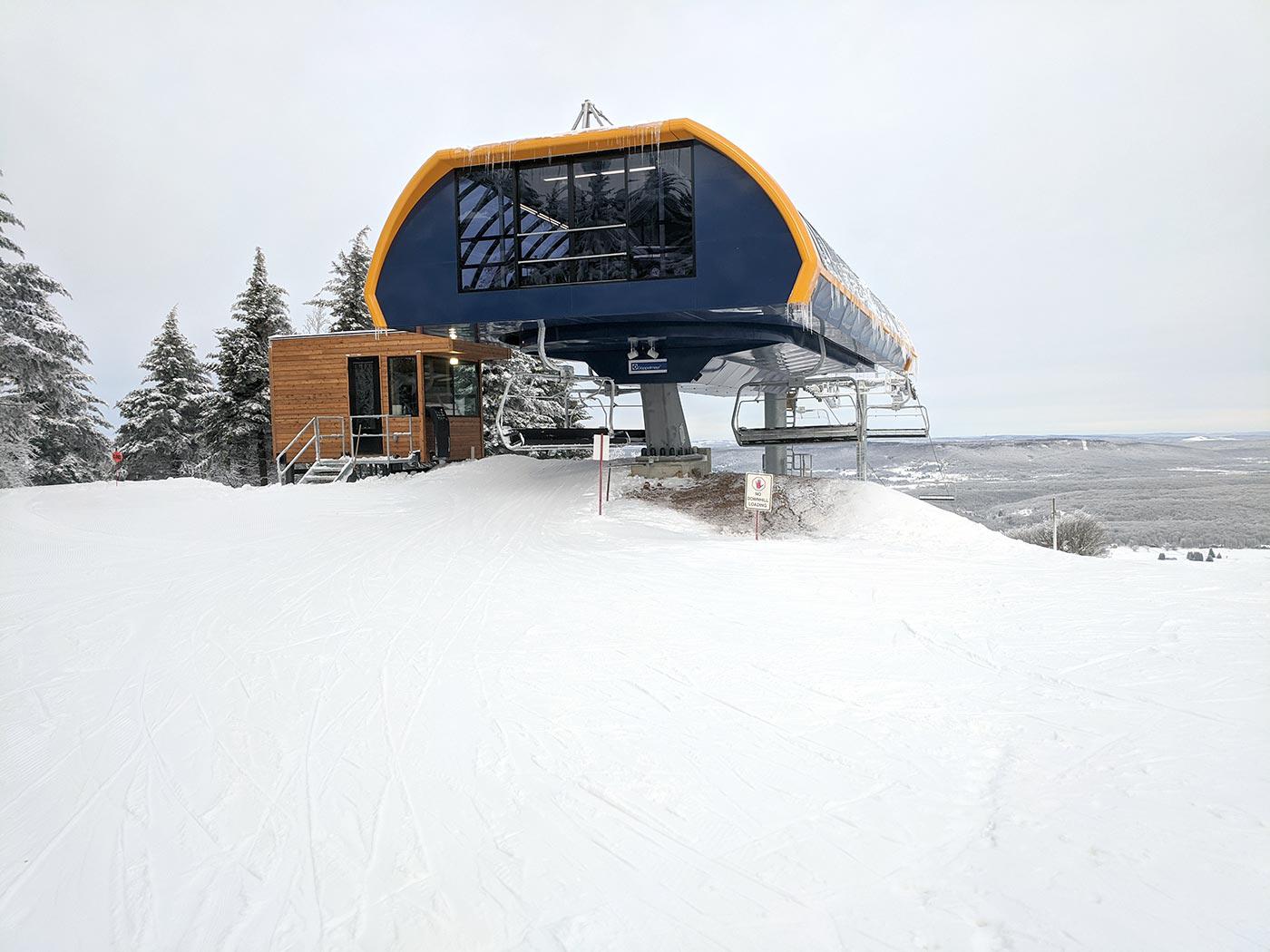 Timberline’s modern 6-Pack High Speed Lift is the first of its kind in the state of West Virginia. Photo provided by a DCSki reader.

With its catchy blue-and-gold color scheme — a nod to West Virginia’s state colors — the new high-speed 6-pack lift is perhaps the most obvious change at Timberline. Manufactured by Doppelmayr and installed in recent months, it is the first 6-pack high-speed lift in the state of West Virginia, and represents a significant investment on the part of the new owners. But it is only one of numerous upgrades that were made to the mountain over the past year.

“There were thousands of hours spent planning and executing all the changes, upgrades, and overhauls that the former resort needed to become the new Timberline Mountain,” explained Alex.

“Tremendous efforts were made this past summer and fall to upgrade the snowmaking system, which included the installation of 70 new tower-mounted SMI snowguns. 43 of the existing portable snowguns were refurbished with better nozzles and electrical equipment to optimize performance. There were also two miles of new pipe installed and dozens of repairs made to the underground snowmaking system which supplies water to the snowguns throughout the mountainside,” he added. 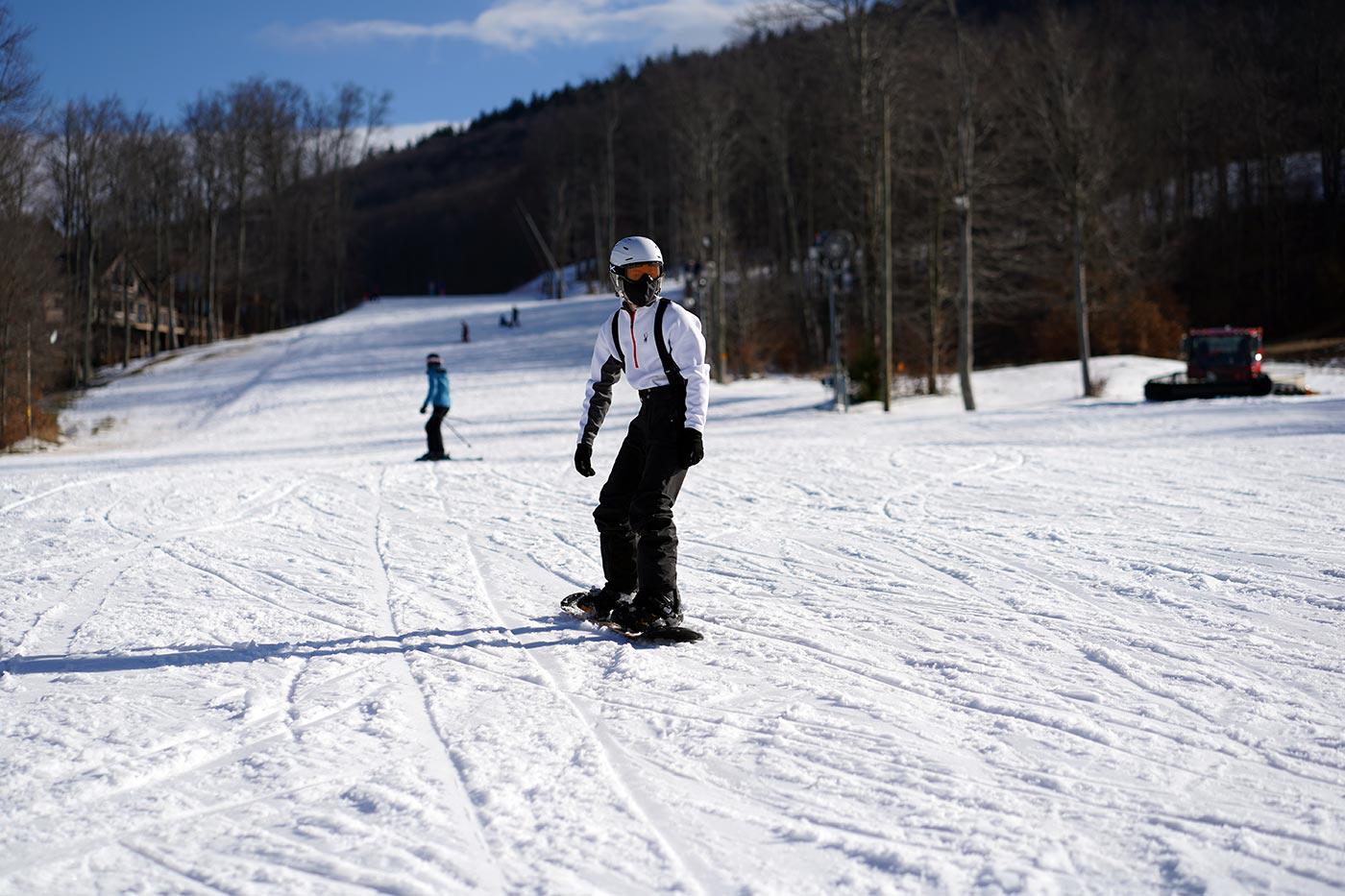 The snowmaking upgrades have allowed Timberline to bump up its water pumping capacity 20%, and that helped Timberline open two trails from the top for opening day, including Salamander and White Lightning.

“Many of the local skiers and snowboarders believed that this was the first time that Salamander, a crowd favorite, was open for the first day of the season,” said Alex. 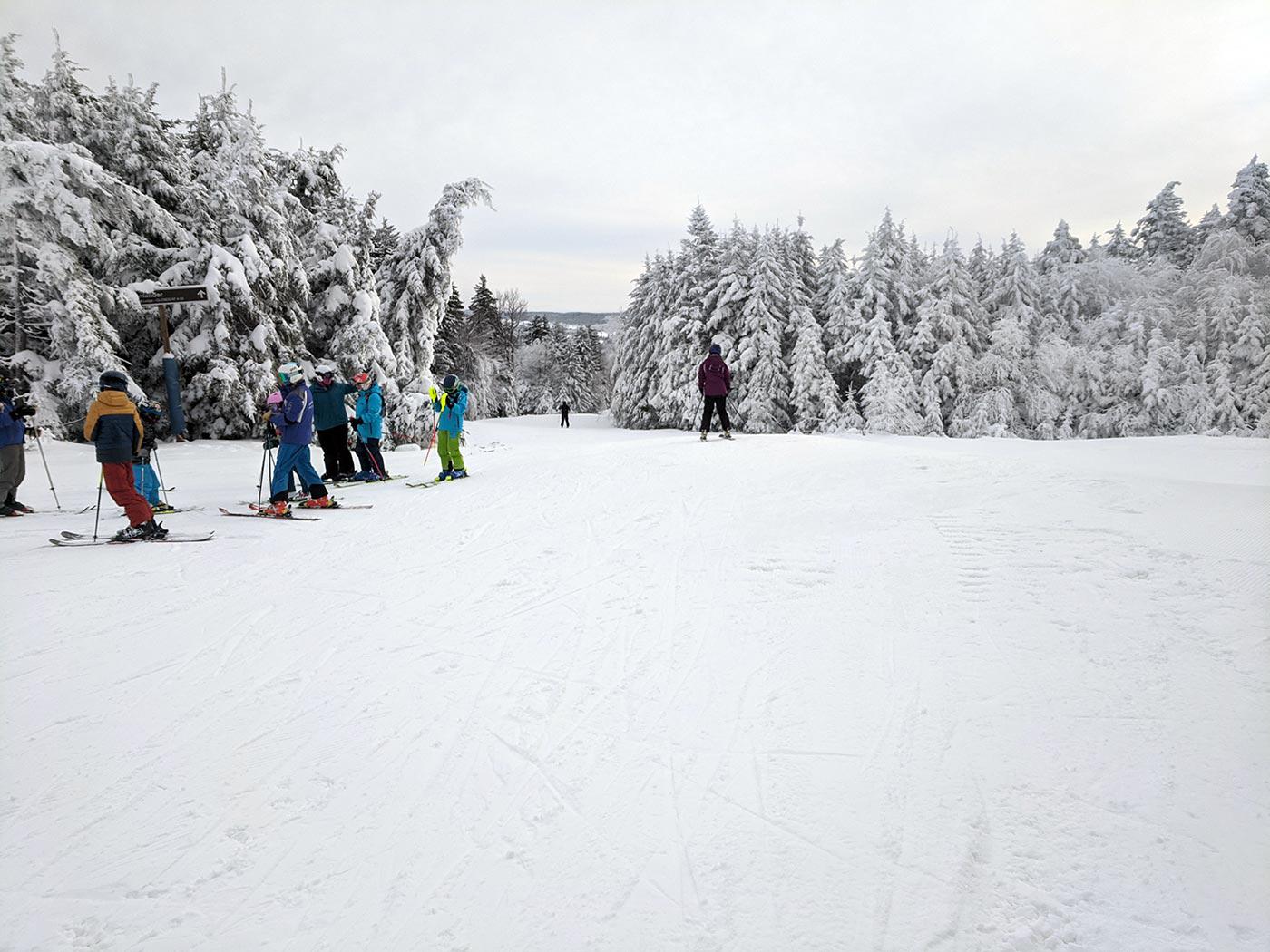 Mother Nature has graced Timberline with some natural snow in recent days. Photo provided by a DCSki reader.

In addition to snowmaking, Mother Nature has added a nice helping of snow to Timberline’s slopes in recent days. Overnight on December 21, the resort reported receiving 10-12 inches on some parts of the mountain. With an elevation between 3,200 and 4,200 feet, Timberline is in a favorable microclimate; when it’s raining in the D.C. area, it might be snowing at Timberline.

According to a DCSki reader after his visit to the mountain, the staff at Timberline were “dialed in and enthusiastic.” The reader noted that the “newly renovated Craftsman-style lodge will be a winner once finished.” Outdoor seating has been expanded, but the lodge is still under construction. 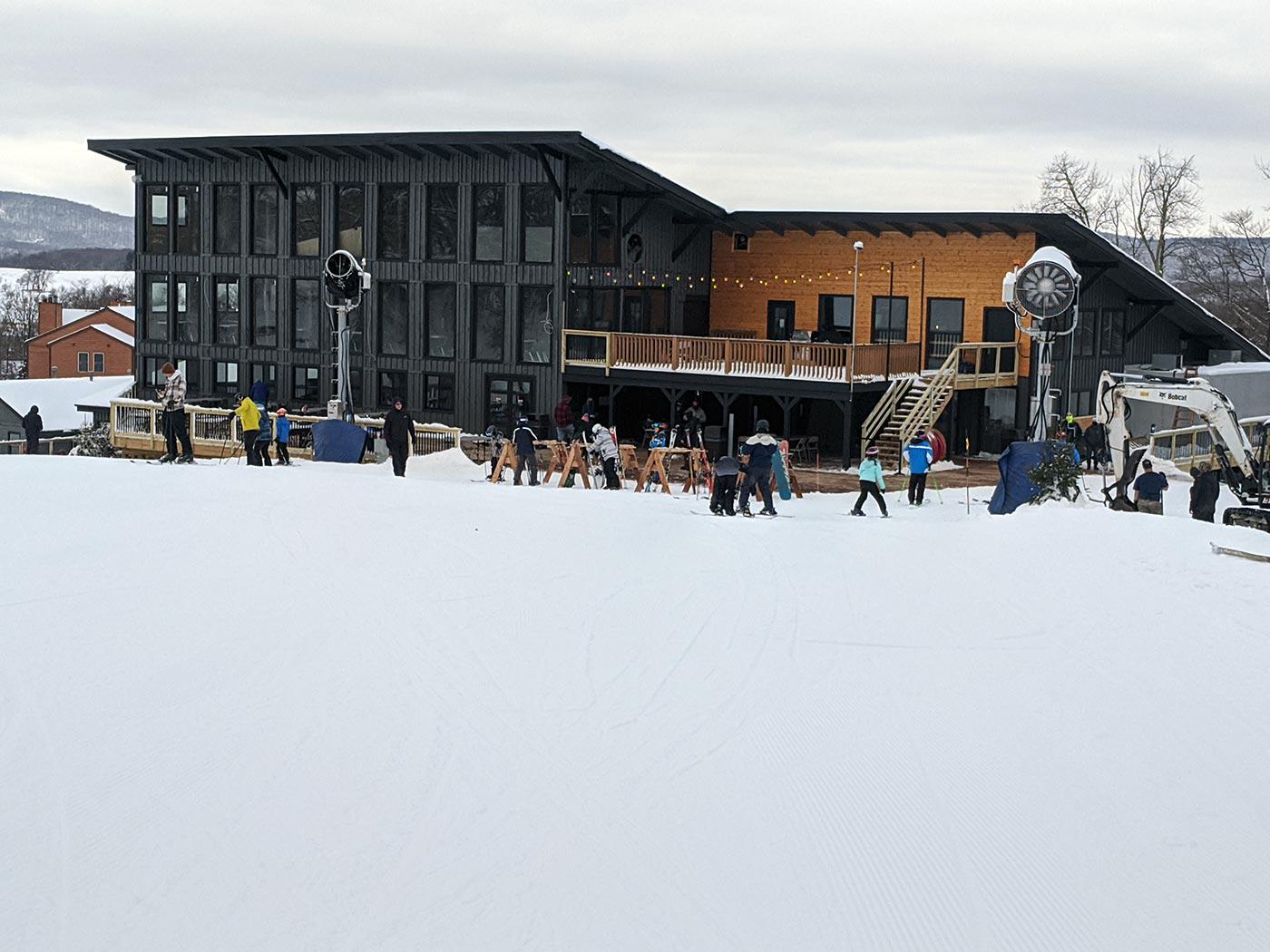 The Timberline base lodge is in the process of being upgraded. Photo provided by a DCSki reader.

While the first few days of the “new” Timberline have impressed and excited skiers, additional improvements will be on the way. One reader noted that grooming could use some work to get to “Deer Valley levels.” Other readers expressed concern that parking could become limited at Timberline on busy days. Also, night skiing is unlikely to be offered this season, although may return next winter after lighting is upgraded.

Minor quibbles aside, Mid-Atlantic skiers are impressed by the progress made rejuvenating Timberline over the past year, particularly in light of the continuing COVID-19 pandemic. Speaking of COVID, readers report that skiers and snowboarders have been following COVID guidelines at Timberline, including wearing face coverings and practicing social distancing. At this time, Timberline is not requiring reservations prior to visiting, but it’s always a good idea to check with the resort prior to making a visit for the most up-to-date guidelines and information. 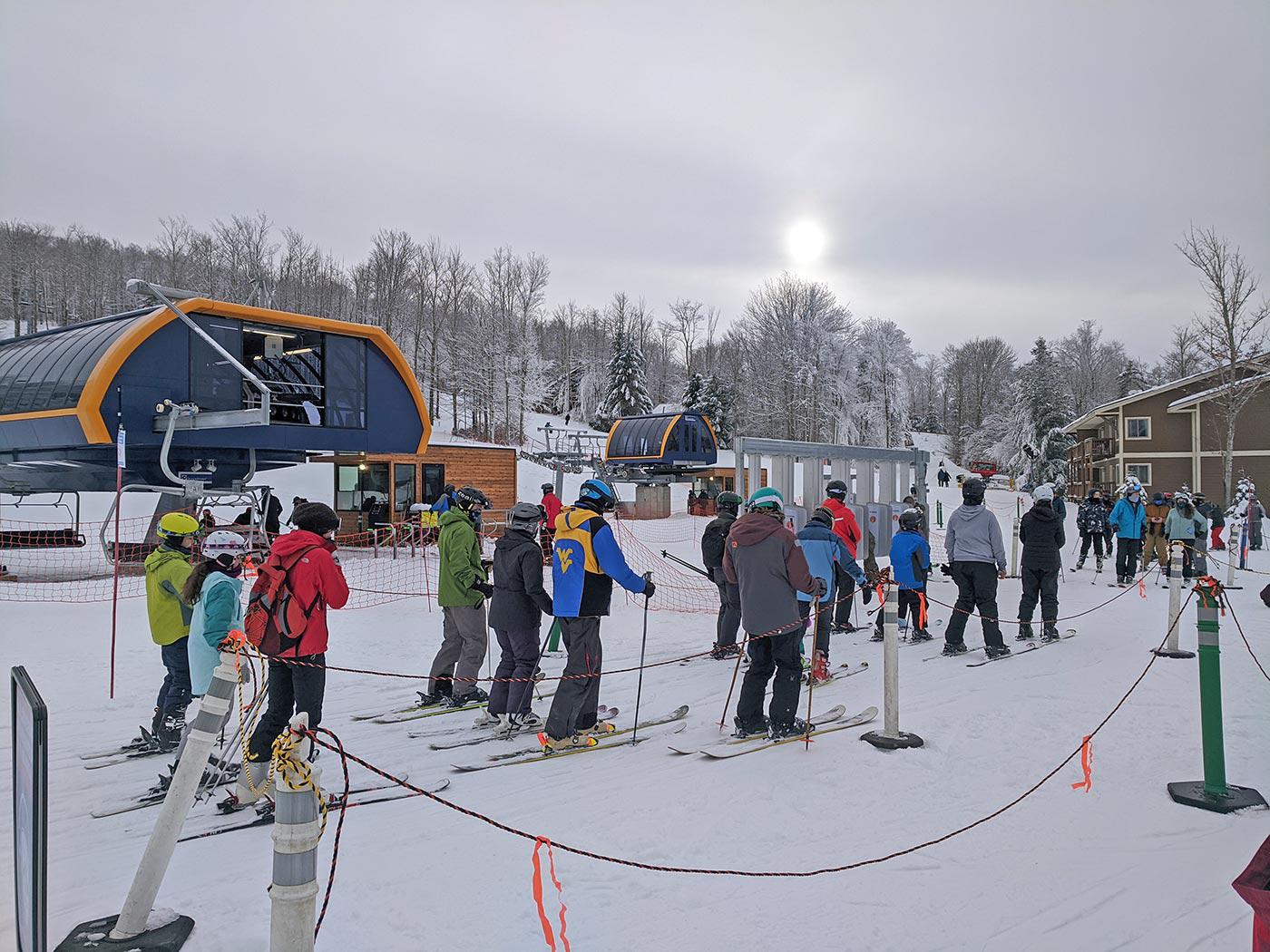 According to DCSki readers, guests to Timberline adhered to COVID-19 safety protocols. Photo provided by a DCSki reader.

Having officially opened for the season, Timberline is now focusing on bringing additional terrain on-line in time for Christmas. As of December 22, 15 out of 23 trails were open, with a 9-30 inch base of packed powder conditions.

“The response from the first few skiers and riders was fantastic, they seemed quite elated to reconnect with the snow and the mountain that is now reinvigorated with new life, excitement, and energy,” said Alex. 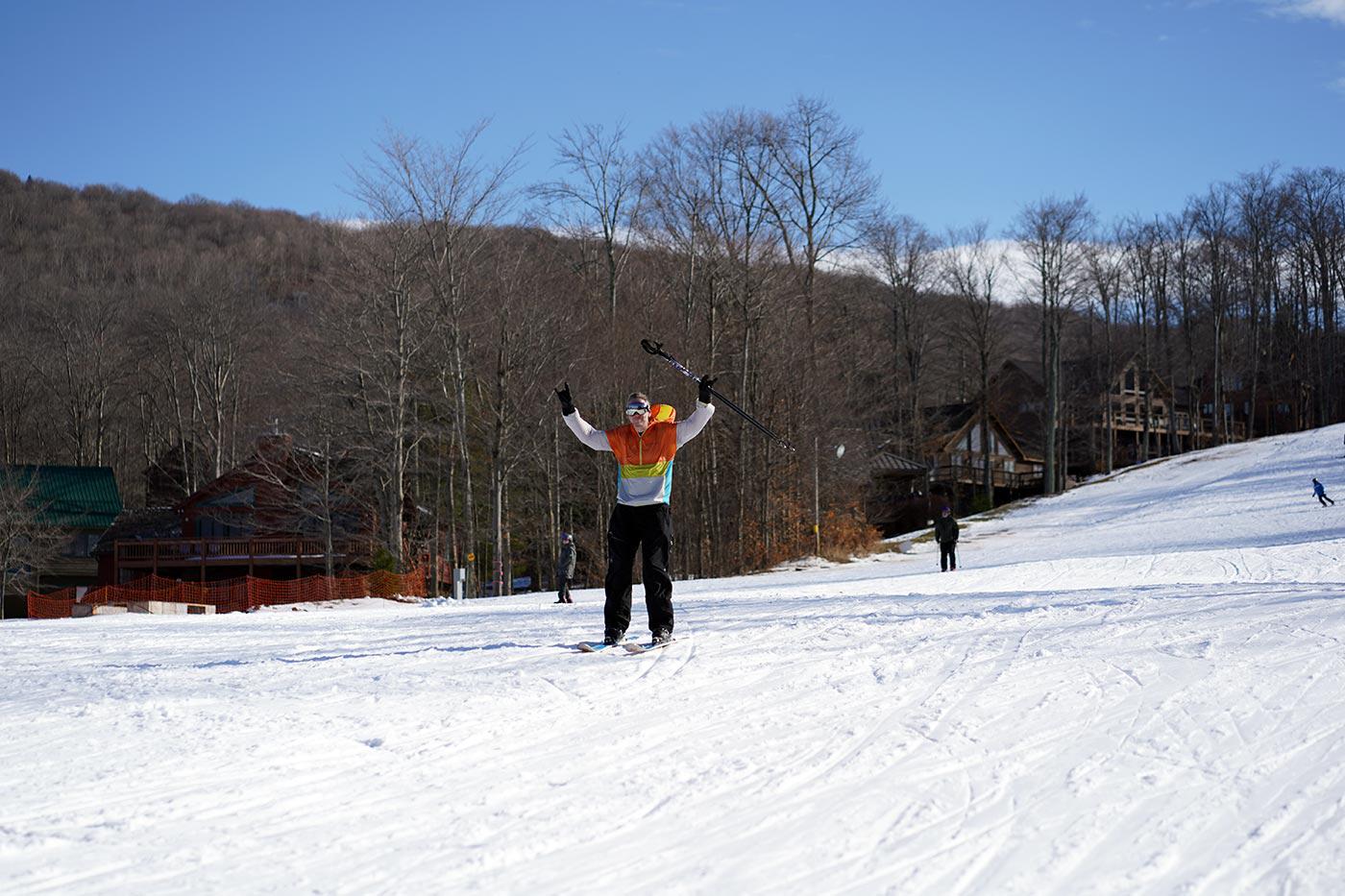 One of the first skiers of the season at Timberline. Photo provided by Timberline Mountain.

To read comments from DCSki readers about their visits to Timberline Mountain, swing by the DCSki Forum. You may also view DCSki’s Resort Profile for Timberline.