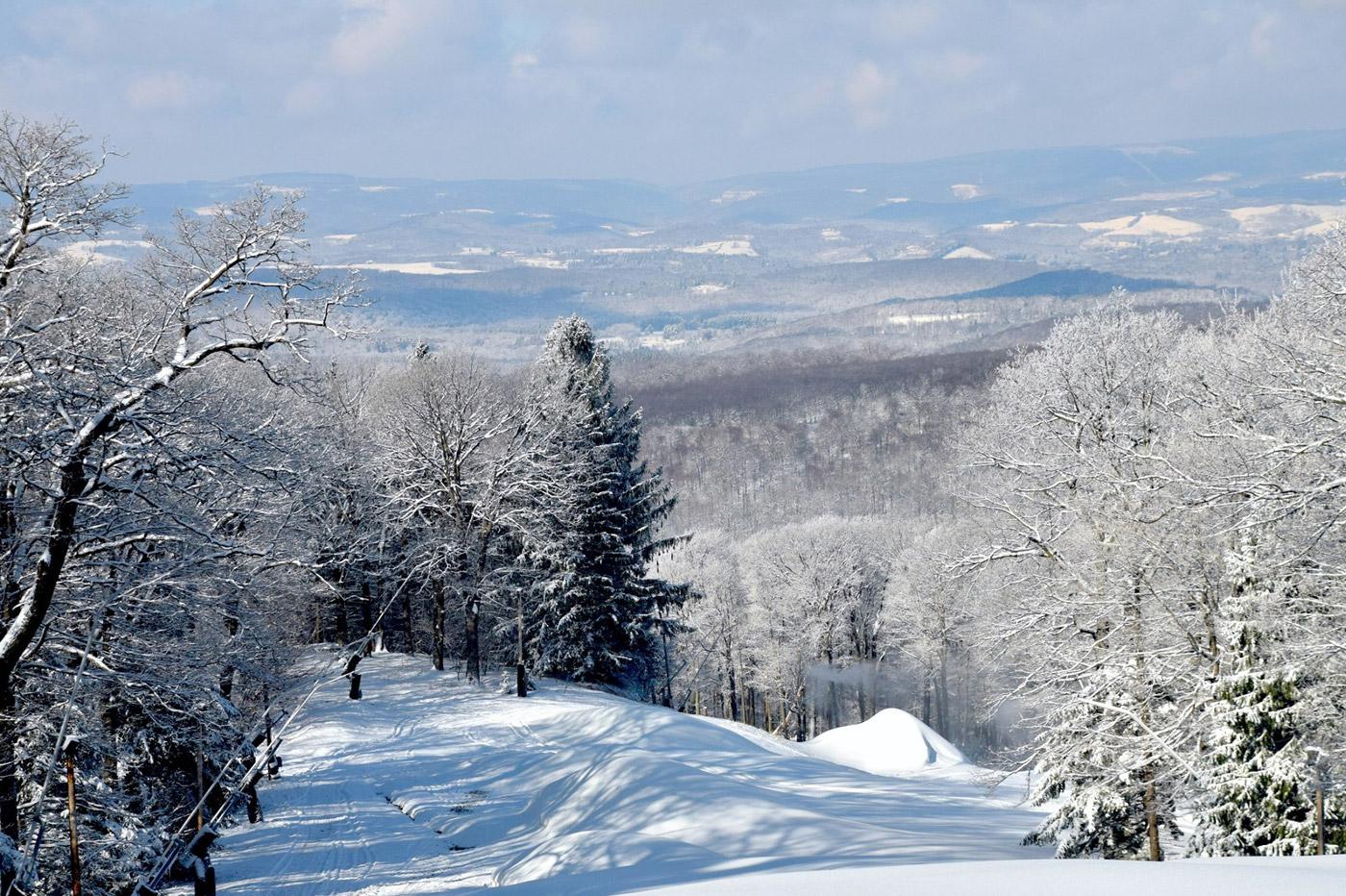 Dating back to the mid-1930’s, Laurel Mountain has a rich heritage. Located in the scenic Ligonier region, the resort was first operated by the Mellon family, initially as a private resort. In 1958, the Mellon family made the ski area public. The ski area was turned over to the state of Pennsylvania in 1962, and various concessionaires operated the resort until March of 1989, when the resort was forced to shut down due to mild winters and a constrained water supply which restricted snowmaking.

DCSki readers report that Laurel Mountain has some of the most advanced terrain in the region - particularly Lower Wildcat, which is so steep that crews had to invent new techniques for putting in snowmaking pipes. Portions of Lower Wildcat have a 60% grade, making it the steepest slope in the state of Pennsylvania. But not to fear — there are plenty of beginner and intermediate slopes, too. Located within 493 acres of Laurel Mountain State Park, the area also offers some of the best views in the region.

A new quad chairlift was installed prior to the 2016-2017 winter season.

Although there is no lodging on-site, there are numerous hotels, inns, and bed and breakfasts within a 5-30 minute drive. 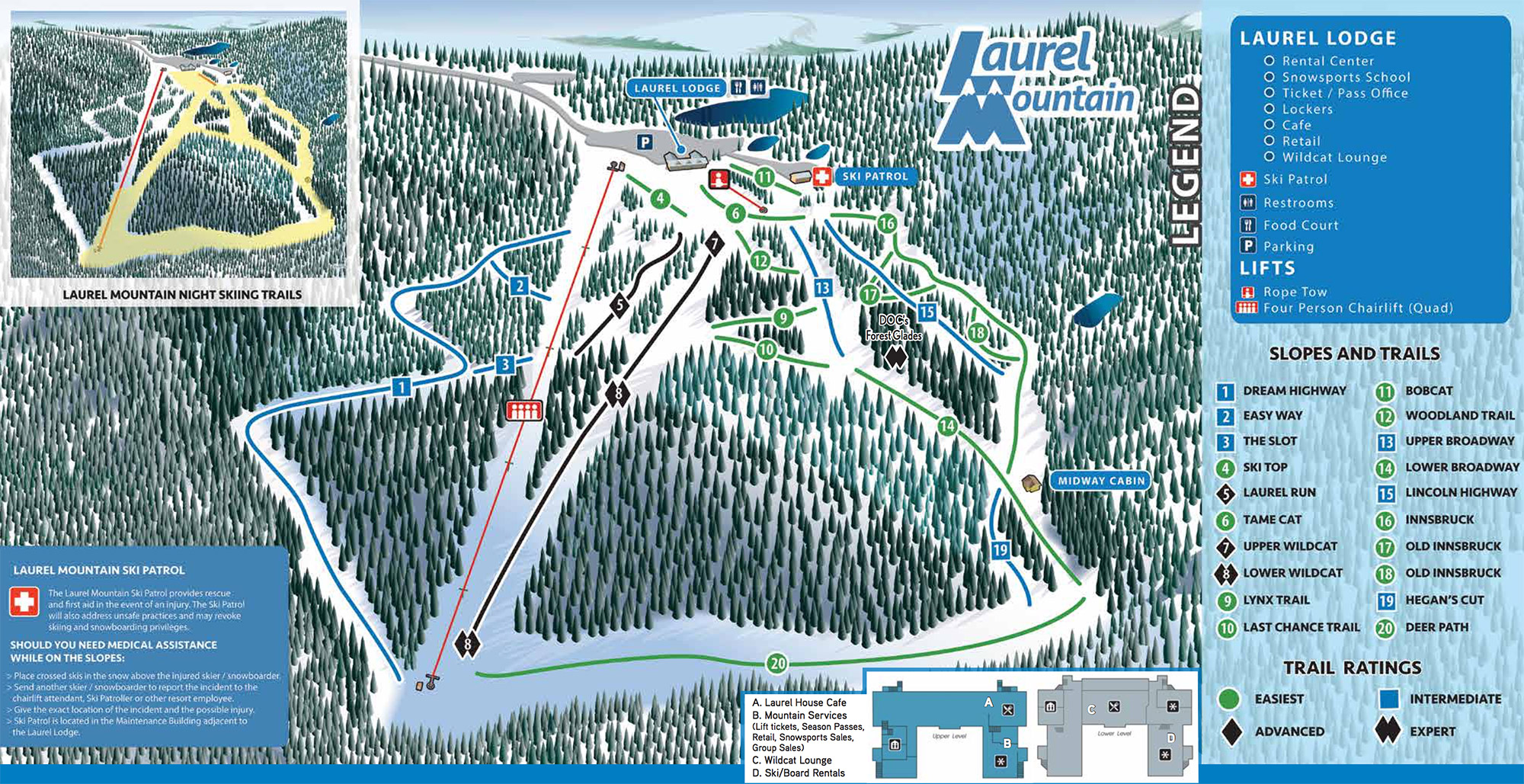 Getting to Laurel Mountain Ski Resort

41° F
Overcast
Doesn't look like it's cold enough for snowmaking.

High: 36°
Areas of Drizzle
Areas of drizzle with scattered showers. Cloudy, with a high near 36. Northwest wind 11 to 13 mph. Chance of precipitation is 50%.
Tonight

Low: 32°
Areas of Drizzle then Cloudy
Areas of drizzle with scattered showers before 7pm, then isolated showers between 7pm and 9pm. Cloudy, with a low around 32. Northwest wind 5 to 9 mph becoming southwest after midnight. Chance of precipitation is 30%.
Tuesday

Low: 38°
Mostly Cloudy then Showers and Breezy
Showers after 1am. Low around 38. Breezy, with a south wind 16 to 21 mph. Chance of precipitation is 90%. New precipitation amounts between a tenth and quarter of an inch possible.

Weather supplied by the National Weather Service. Errors or reporting delays may be possible.

Snow conditions supplied by SnoCountry, and may be inaccurate or delayed at times. Please check directly with Laurel Mountain for the most up-to-date snow and operating conditions. 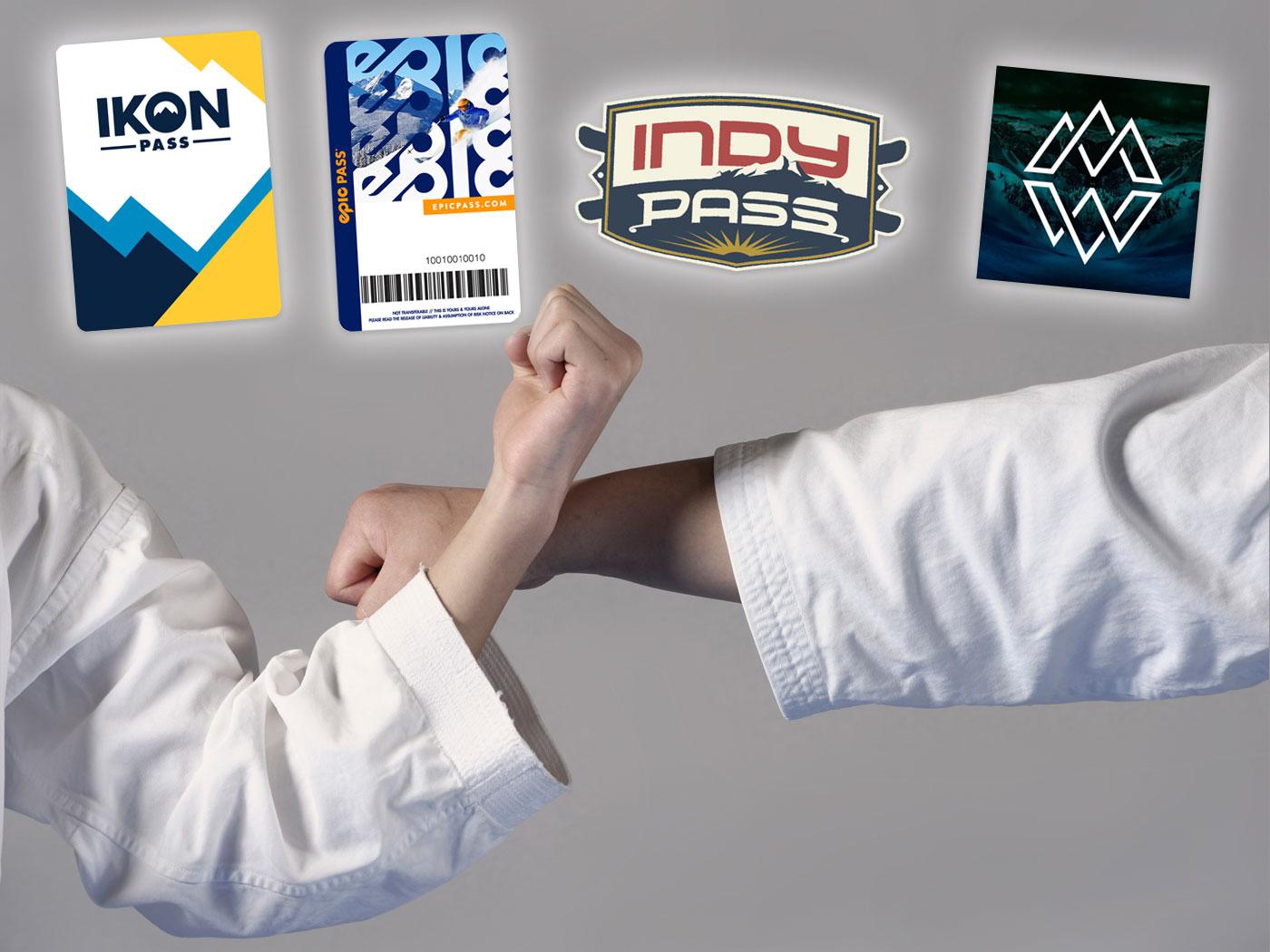 April 25, 2022 - It is once again Spring, which means it’s time to consider purchasing a season pass for the 2022-2023 winter season before prices begin to inch up. DCSki breaks down the choices and factors Mid-Atlantic skiers should consider as they explore available pass options.
From a Drizzly December to a Snowy New Year 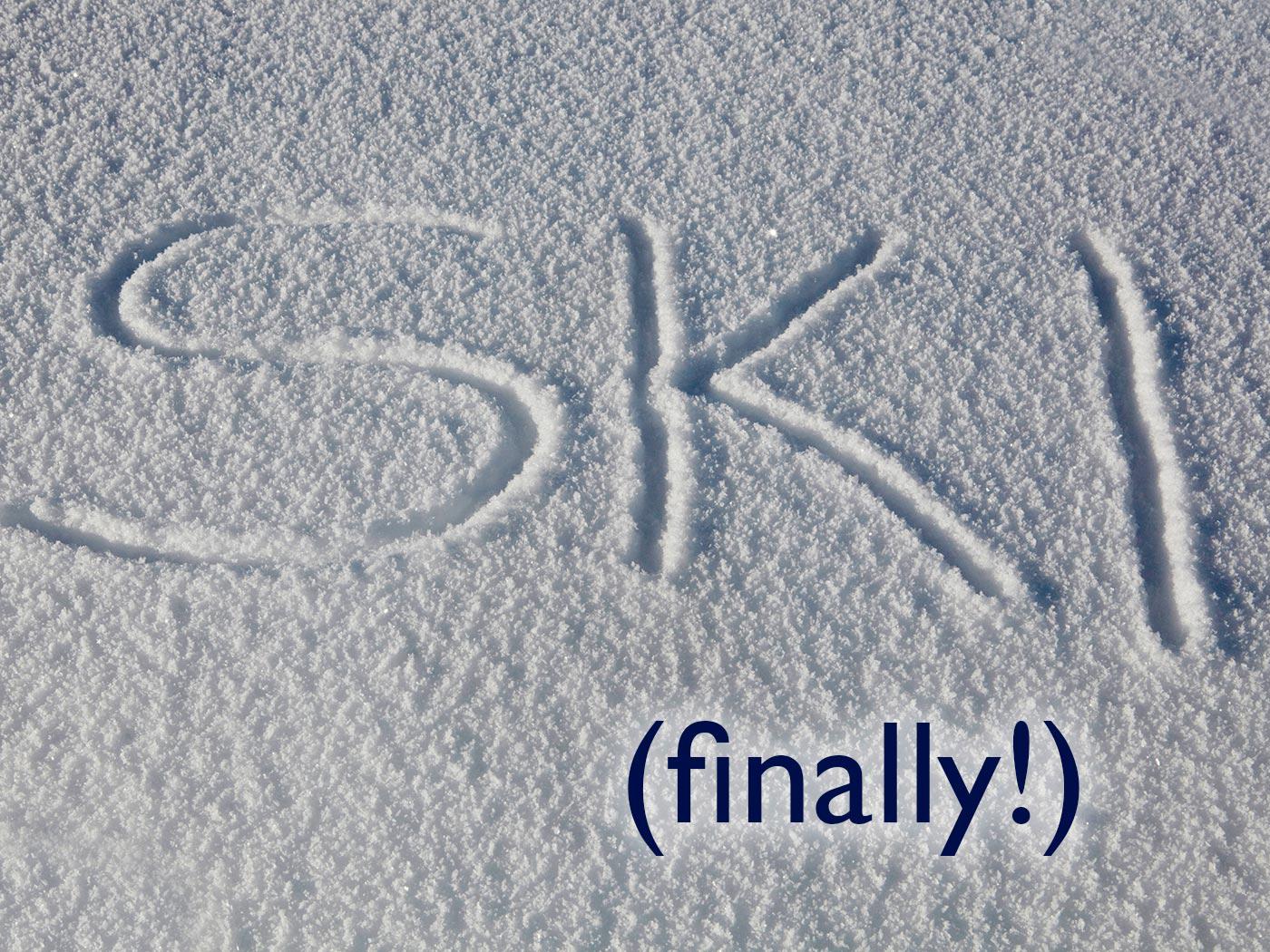 January 7, 2022 - The second half of December wasn’t ideal for Mid-Atlantic ski areas: cold temperatures from early in the season yielded to unseasonably (and, to skiers, unreasonably) mild days. As the calendar advanced from December to January, that’s all changed. DCSki provides a roundup of the latest conditions at local ski resorts.
Vail Resorts to Purchase Seven Springs, Hidden Valley, Laurel Mountain 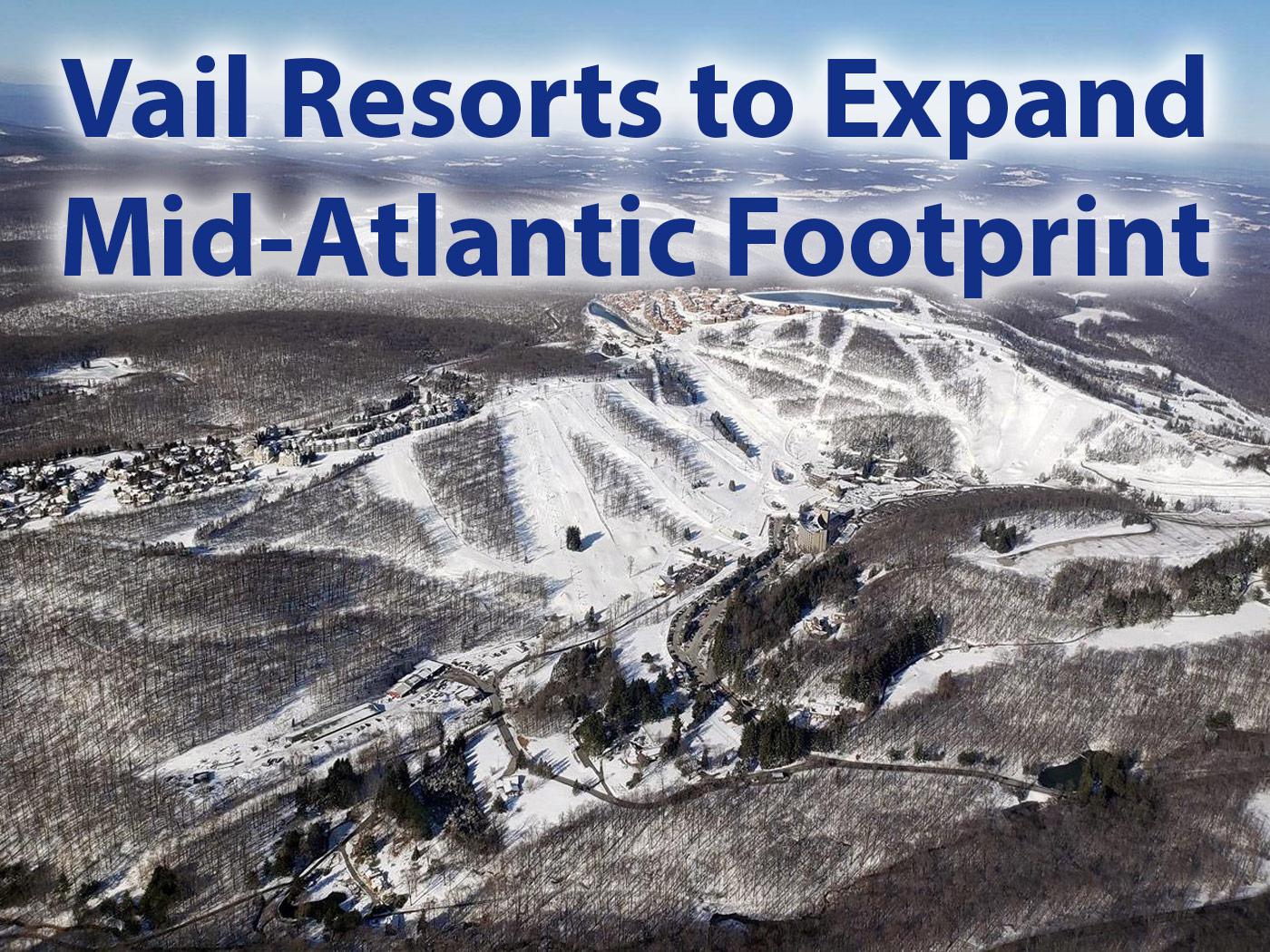 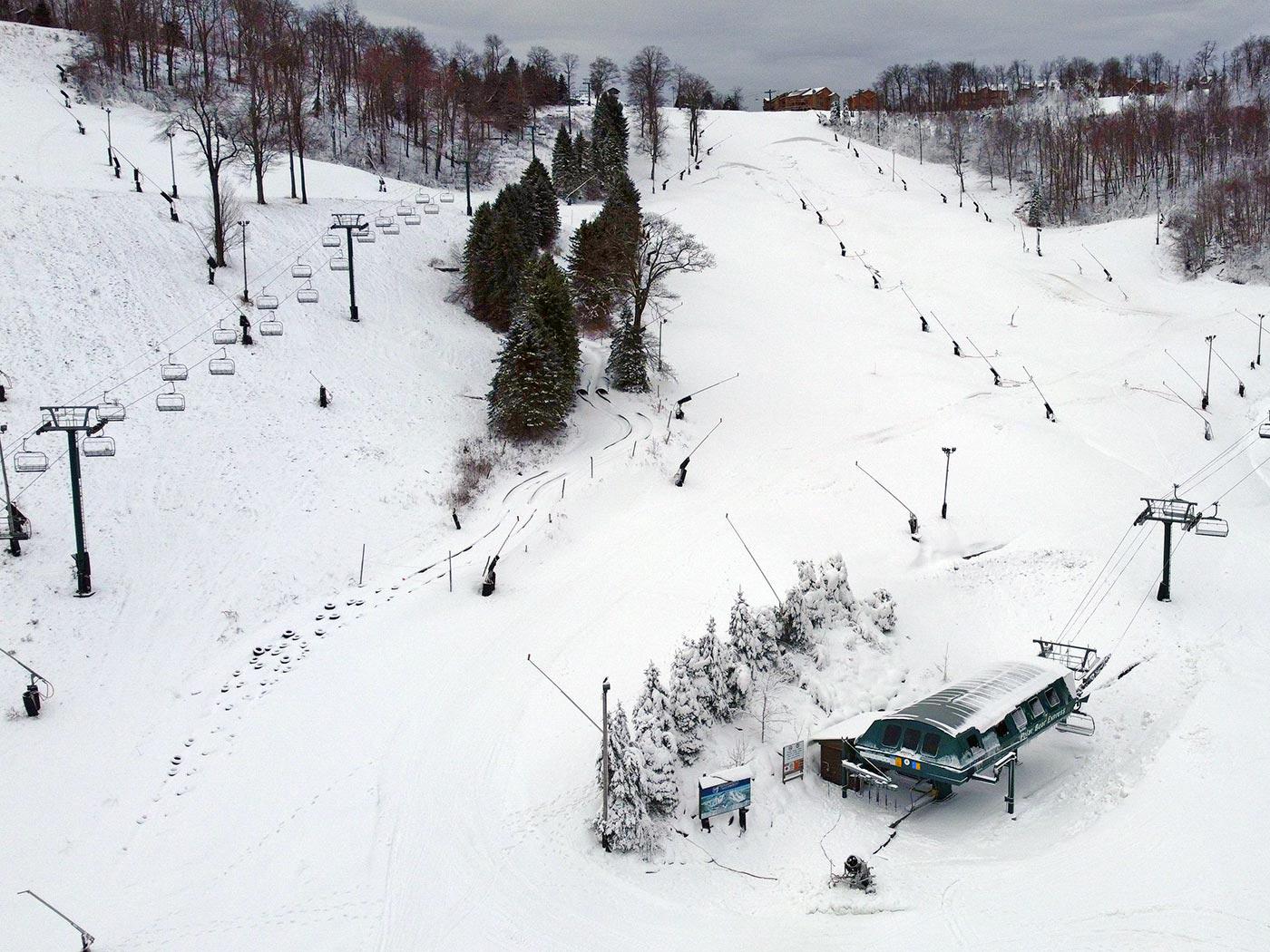 December 1, 2021 - The Mid-Atlantic ski season is already underway, and additional ski areas are scheduled to come on-line the weekend of December 4-5. DCSki presents a complete roundup of open — and soon-to-open — ski areas in this December 1, 2021 update. Above, Pennsylvania’s Seven Springs Resort has been laying down snow in preparation for a December 4 opening.
User Highlight: Rob Davis 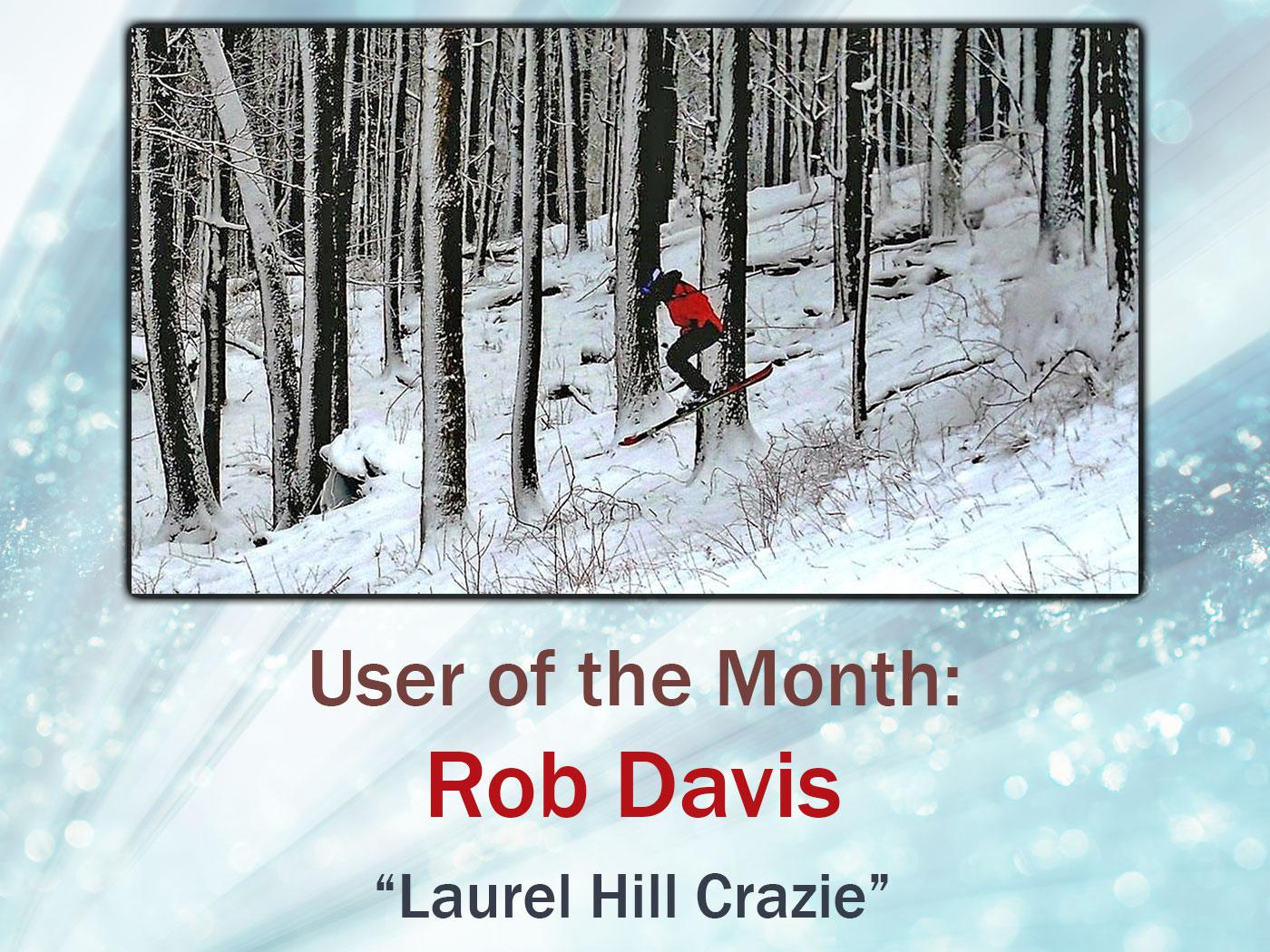 March 6, 2021 - Known as “Laurel Hill Crazie” on the DCSki Forums, Rob Davis is a retired steelworker from Pittsburgh. Rob has a special connection to Pennsylvania’s Laurel Mountain Ski Resort, where he has skied hundreds if not thousands of times. Learn more about Rob and the history of Laurel Mountain in this interview.
Mid-Atlantic Resorts Kick Off Ski Season 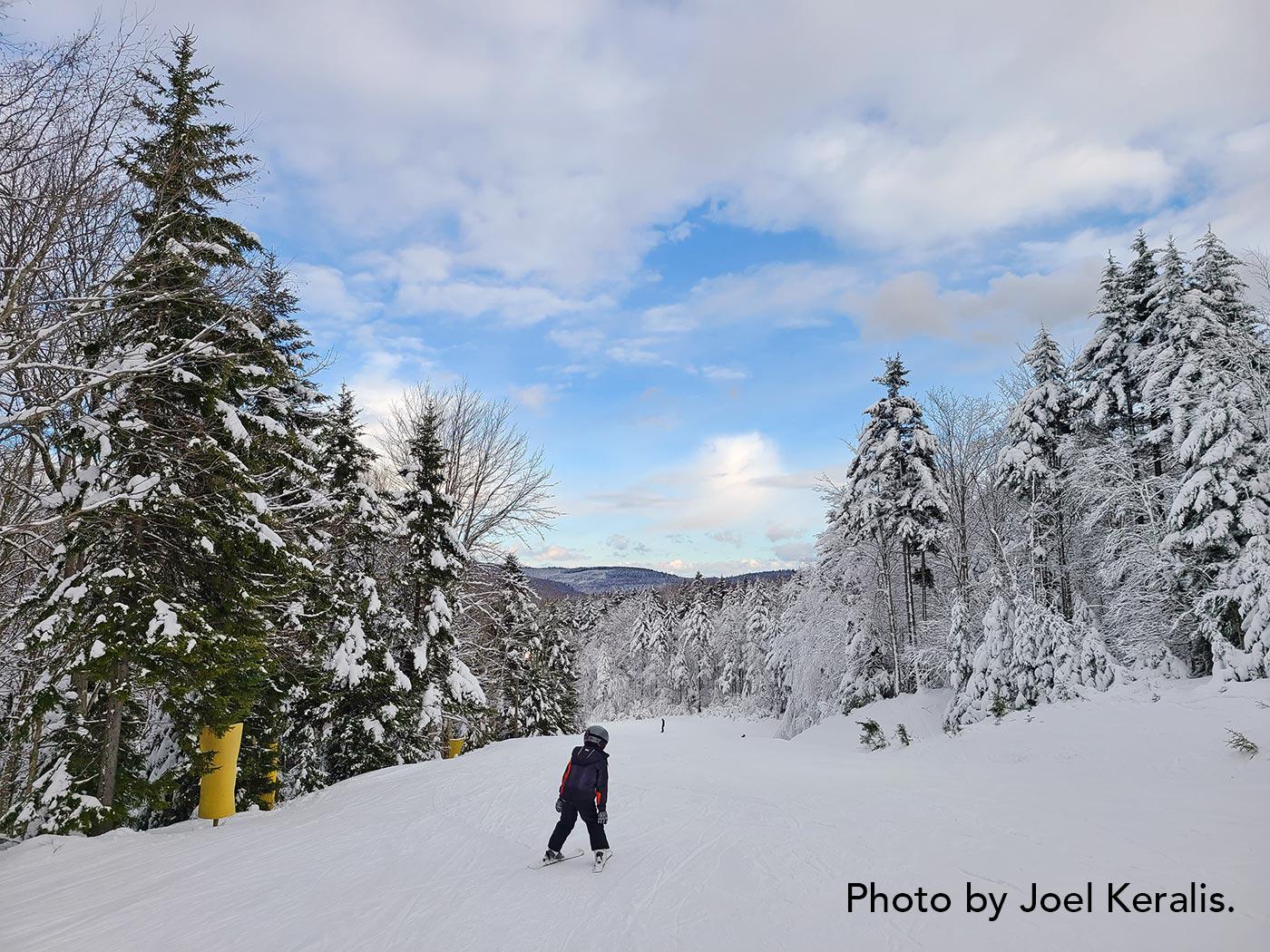 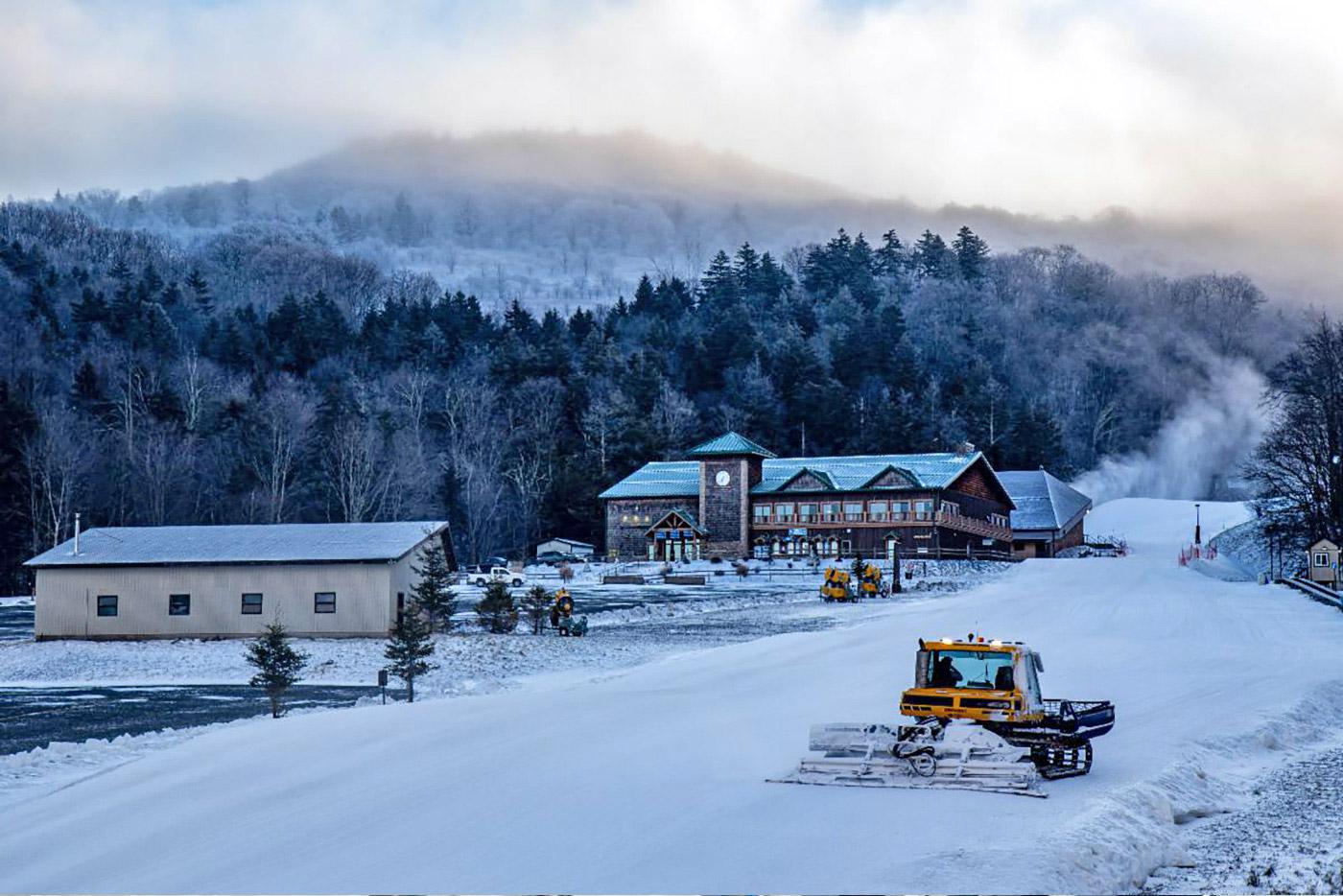 December 21, 2019 - After a burst of cold weather in November allowed some Mid-Atlantic resorts to snag pre-Thanksgiving opening dates, the balance of resorts have now officially begun their season in recent days thanks to a stretch of snowmaking-friendly temperatures.
Firsthand Report: Laurel Mountain, the Country Club of Pennsylvania Skiing 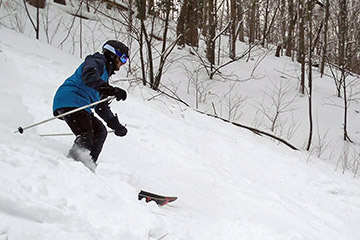 February 9, 2019 - Jim Kenney hit the trifecta of fine ski conditions last weekend at Pennsylvania’s Laurel Mountain Resort, experiencing a powder Friday, bluebird Saturday, and spring skiing Sunday. The icing on the cake? Spending the weekend in person with a couple dozen friends met through on-line communities such as DCSki. Jim provides this Firsthand Report of the unspoiled Laurel Mountain.
The Season So Far 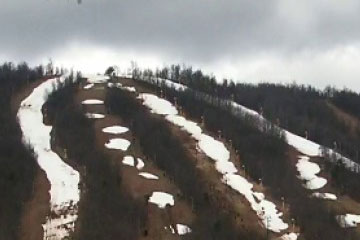 January 3, 2019 - The 2018-2019 winter season is off to a rocky start, with above-average temperatures throughout much of December. DCSki provides a roundup of current conditions and struggles across the Mid-Atlantic.
Rain Tries to Crash Party, but More Resorts Slated to Open 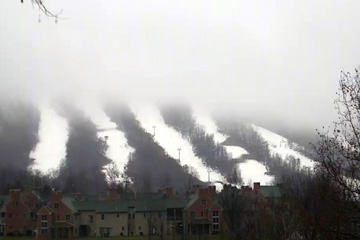 December 20, 2018 - Early-season cold temperatures enabled many Mid-Atlantic resorts to fire up the snowguns, but the cold gave way to some bouts of milder temps and heavy rain, which has delayed the start of the season for some resorts. Although pre-Christmas rain is still adding to the challenge, several additional resorts plan to open in the coming days.